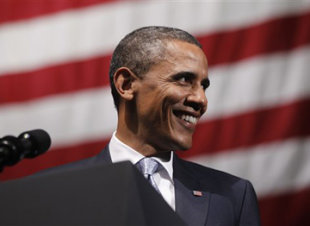 announced his 2012 re-election campaign. While that carefully choreographed rollout was hardly a surprise, the Obama campaign team has run into some early unexpected bumps in run-up to 2012. Just this week, the Obama camp was forced to defend using the White House as a backdrop for a re-election campaign commercial after some questioned whether the White House was improperly blurring the lines between the presidency and the campaign. (The Obama camp, for the record, cited past precedent and said there was nothing improper about the White House imagery in the spot.)Below we review this and other recent presidential campaign blips:• Filming at the White House: National Review Online’s Jim Geharty on Monday questioned the apparent politicization of the White House after  a newly released campaign commercial used it as a backdrop to promote a raffle for dinner with Obama. Other news outlets questioned the legality of the filming and whether it violated campaign finance laws. But the White House quickly stepped in to defend the location choice, telling Real Clear Politics the following: „The raffle isn’t the type of fundraising that would be off-limits under the law, there was no direct appeal for donations, the video was shot in the residence portion of the White House, and his predecessors have acted similarly.”You can watch the video in question below: • Report: concern over small donors: The Obama campaign has decided to strongly target wealthy donors under the expectation that the grassroots small donors who boosted him to a win in 2008 may not step up this cycle, the Los Angeles Times reported this week. Both major parties in this cycle are pushing hard to reel in big-ticket donors in the wake of the 2010 Supreme Court Citizens United ruling, which legalized some political groups to raise unlimited anonymous funds. The new Obama program, called „Presidential Partners,” asks supporters to donate $75,800 to the Obama Victory Fund (a joint project with the Democratic National Committee). Donors in this elite class would be maxing out on their allowable contributions to political parties for the 2012 cycle, meaning they can’t donate to congressional party committees. The Obama campaign followed up with the Times to dispute the newspaper’s findings saying the president’s upcoming finance report will show that the number of small donors has dramatically increased compared to this time in 2008.• Memo revealed granting appearance of donor access: The Obama campaign instructed the White House to give a top donor the appearance of access to the administration, the Huffington Post reported earlier this month. A private memo indicated that the donor, Full Sail University CEO Ed Haddock, was to be made to feel as if he had a direct „in” with the administration. „Ed needs and wants an ongoing point of contact inside the White House to periodically give input,” the memo reportedly stated. The memo raised questions about the Hatch Act, which technically prohibits federal employees from engaging in partisan political activities. „It is an inappropriate memo,” Fred Wertheimer, Founder and  president of the group Democracy 21 told the Huffington Post. „And as we head into the campaign season and the political money raising season the Obama campaign should be extra careful about creating the potential impression that access is being provided for campaign contributions and fund raising.”• Economic woes drag down poll numbers: When the president announced the killing of Osama bin Laden, the development was widely hailed as not only an international victory but a major coup for Obama’s 2012 election campaign. But any bin Laden-related polling bounce for Obama quickly faded as unemployment and economic woes continued to grip the American public. A poll released this month showed Obama tied with former Massachusetts Gov. Mitt Romney due to voter anxiety about the economy. This week, Obama is busy trying to broker an 11th-hour deal with Congress to raise the national debt ceiling.UPDATE 3:20pmEST: Story updated to include the Los Angeles Times’ follow-up story in which the Obama campaign claimed smaller donors are on the rise compared to figures for this time period in 2008.