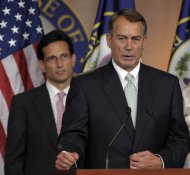 compromise alike, House Republicans on Monday shrugged off President Barack Obama’s threat to veto their legislation to cut federal spending by trillions of dollars, even as they negotiated with him over more modest steps to avert a potential government default.The Republican bill demands deep spending reductions in exchange for raising the nation’s debt limit. But Obama will veto it if it reaches his desk, the White House said, asserting the legislation would „lead to severe cuts in Medicare and Social Security” and impose unrealistic limits on education spending.In response, GOP lawmakers said they would go ahead with plans to pass the bill on Tuesday. „It’s disappointing the White House would reject this commonsense plan to rein in the debt and deficits that are hurting job creation in America,” Speaker John Boehner, R-Ohio said.By contrast, neither the administration nor congressional officials provided substantive details on an unannounced meeting that Obama held Sunday with the two top House Republican leaders, Boehner andMajority Leader Eric Cantor of Virginia.Obama said late Monday the two sides were „making progress.”Barring action by Congress to raise the $14.3 trillion debt limit, the Treasury will be unable to pay all the government’s bills that come due beginning on Aug. 3, two weeks from Wednesday. Administration officials, Federal Reserve Chairman Ben Bernanke and others say the result could be a default that inflicts serious harm on the economy, which is still struggling to recover from the worst recession in decades.In a gesture underscoring the significance of the issue, Majority Leader Harry Reid, D-Nev., announced the Senate will meet each day until it is resolved, including on weekends.The two-pronged approach pursued by the House GOP follows the collapse of a weekslong effort to negotiate a sweeping bipartisan plan to cut into future deficits. The endeavor foundered when Obama demanded that tax increases on the wealthy and selected corporations be included alongside cuts in benefit programs, and Republicans refused.The failure of that effort also reflects the outsized influence exerted by 87 first-term Republicans, many of them elected last fall with tea party backing.Several Republicans say privately the decision to vote on veto-threatened legislation is paradoxically designed to clear the way for a compromise by giving conservatives a chance to push deep spending cuts through the House and then demonstrating the same measure will die in the Democratic Senate or be vetoed by the president.As late as last Thursday, Republican leaders held a news conference to tout plans to vote this week on a proposed balanced budget amendment to the Constitution.But the same senior Republicans emerged from a closed-door meeting of the rank and file on Friday to say the House would instead vote on an alternative — dubbed by its advocates as „Cut, Cap and Balance.” No date has been set for a vote on the constitutional amendment itself.Officials said the change in course had been requested by members of the Republican Study Committee, whose members are among the most conservative in Congress.Supporters of the measure say it would cut $111 billion from government spending in the budget year that begins on Oct 1, and $6 trillion more over the coming decade through a requirement that the budget shrink relative to the overall size of the economy.Additionally, it would require both houses of Congress to approve a balanced budget amendment to the Constitution as a condition for an increase in the debt limit.Both Boehner and Cantor reacted relatively mildly to the White House veto threat.”As President Obama has not put forth a plan that can garner 218 votes in the House, I’d caution him against so hastily dismissing ‘Cut, Cap and Balance,'” said Cantor.Other Republicans, by contrast, took a harder line.”I find it incredibly ironic that President Obama is one of the few Americans who think we don’t need a constitutional amendment ‘to do our jobs.'” Said Rep. Jeb Hensarling of Texas, a member of the leadership.”The point of cutting up the credit cards in order to raise the debt ceiling isn’t to meet his tax-and-spend demands; it’s to force him to stop spending money we don’t have.”Senate Republican leader Mitch McConnell, R-Ky., made a strong statement of support for the measure.”Not only is this legislation just the kind of thing Washington needs right now, it may be the only option we have if you want to see the debt limit raised at all,” he said.”I strongly urge my Democratic friends to join us in supporting it.”Despite his warning, McConnell and Reid have been deeply involved in writing a fallback measure that is viewed in both houses as promising.It would allow the president to raise the debt limit by $2.4 trillion in three installments over the next year without a prior vote by lawmakers. Instead, a panel of House and Senate members would be created to recommend cuts in benefit programs, with their work guaranteed a yes-or-no vote in the House or Senate.Recreating the divide that plagued the earlier negotiations, Democrats want the panel to have the power to recommend higher taxes.Neither Reid nor McConnell has publicly disclosed the details of the measure, and neither is expected to do so as long as the legislation in the House is pending._Associated Press writers Andrew Taylor, Erica Werner and Ben Feller contributed to this story