40 percent of Americans say they approve of Obama’s performance as president. That is down three 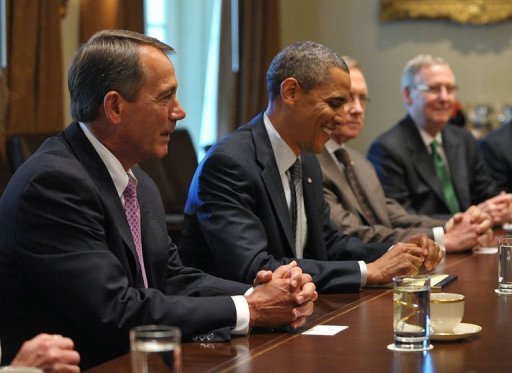 percentage points from Thursday. 50 percent say they do not approve of the job he is doing.The poor rating comes amidst an increasingly chaotic debate over raising the debt ceiling, as the deadline to raise it or risk the government defaulting on its debts looms.Just 41 percent of the public said they approved of the way Obama was handling the debt-ceiling negotiations, while 52 percent disapproved

,according to another Gallup poll released Thursday. Nonetheless, Obama still polls better than congressional leadership. Speaker of the House John Boehner and Senate Majority Leader Harry Reid both received even lower approval rates.The president’s 40 percent approval rating follows a Pew Research Center for the People and the Press poll released Thursday that found Obama’s support among independents has eroded a great deal. 54 percent of independents disapprove of Obama’s performance as president, according to the Pew poll, the most during his time in office. Just 36 percent approve of the job he is doing.Obama has also lost ground against a generic Republican challenger — getting 41 percent of the vote when matched with an unnamed Republican who polled 40 percent.Obama’s approval rating is below that of former President Bill Clinton’s lowest approval rating during the government shutdowns of 1995. At the very end of the shutdown, Clinton’s approval rating was down at 42 percent, but quickly rebounded back to over 50 percent. His lowest approval rating ever was 37 percent in mid June of 1993.Read more stories from The Daily Caller