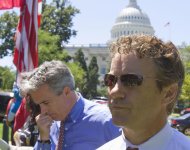 delays and unwanted revisions to crucial debt-ceiling legislation.This tiger did not change it stripes. When tea partyers emerged as a political phenomenon in 2009, they vowed to stand on principle and 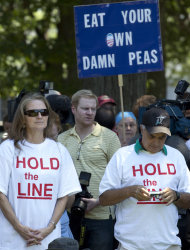 change the way Washington works. They’ve kept that promise despite some doubters’ predictions they would succumb to the get-along, go-along crowd once they reached Capitol Hill.That fidelity is now threatening GOP unity and causing headaches for party leaders as they try to negotiate with Democrats in a divided government. With the 2012 campaigns cranking up, some Republicans are re-evaluating the fiery movement that fueled their sweeping victories in 2010.House Speaker John Boehner’s misreading of tea partyers’ doggedness this week forced his chagrined team to postpone votes twice on his debt-ceiling bill. Finally, on Friday, Boehner had to amend the bill in ways Democrats openly derided. The events proved „that while the tea party Republicans are a noisy and effective protest movement, they are unfit for governing,” said Rep. Chris Van Hollen, D-Md.Said Rep. Steven LaTourette, an Ohio Republican: „We’ve lost some leverage.”Boehner’s original bill to raise the debt ceiling by Tuesday’s deadline was already doomed in the Democratic-controlled Senate, where talks of a possible final-hour bipartisan deal were under way. But the House’s tea party holdouts forced Boehner to push his bill even further to the right, prompting taunts that it wasn’t serious, let alone viable.Boehner could not secure the votes he needed from conservatives until he accepted an unusual condition for a second debt-limit increase, which would be necessary in a few months. Both chambers of Congress first would have to approve a constitutional amendment requiring balanced budgets, which requires a two-thirds majority in both houses. Some conservatives have long dreamed of such a change. But leaders in both parties acknowledge it is politically unachievable.Boehner’s original bill was already imperiled because it would tie the second debt-ceiling increase to huge mandatory spending cuts, which President Barack Obama rejected. The speaker’s allies said the tea partyers’ demands make it all the harder to argue that Democrats should seriously consider the House bill.Rep. Steve Womack, R-Ark., said Democrats will „feel like they’ve got a lot more power and influence in this process right now.”The political fractures are reaching into the GOP, and even the tea party movement itself. Some tea party-backed lawmakers embraced Boehner’s original bill, drawing fire from the movement’s most unyielding wings.A group called The United West labeled four House Republicans „tea party defectors.” One of them was first-term Rep. Allen West of Florida, a highly visible favorite of many tea party factions.The accusation angered conservative radio host Laura Ingraham, who brought West on her show and defended him. „He understands how to declare victory, even if that victory is incremental,” she said. West understands „the limits of one’s power when you control one house of Congress.”West said, „One minute they’re saying I’m their tea party hero, and what, three or four days later. I’m a tea party defector? That kind of tea party schizophrenia, I’m not going to get involved in it.”GOP Rep. Paul Broun of Georgia, who says he will not support a debt limit hike under any circumstances, defended the tea party movement.”The tea party has been maligned unfairly,” Broun said in an interview. „It’s about limiting government according to what the Constitution says it should be.””This is truly a reflection of the strongest political force in America,” Broun said.Even Democrats grudgingly acknowledge that the tea party has pushed national policy toward deeper spending cuts without tax increases. Obama for months insisted that higher tax revenues be part of a debt-reduction package, but Senate Democrats have dropped that bid.The highly decentralized tea party movement was born amid the fiercely partisan fight that led to passage of Obama’s health care overhaul in 2010. At public forums throughout the nation, citizens sharply criticized the plan’s reach into private lives, including its requirement that everyone eventually buy health insurance.The movement, which also decried federal bank bailouts and stimulus programs, played a huge role in last fall’s elections, when Republicans regained control of the House after four years in the minority.Now, some establishment Republicans are wondering if they got more than they bargained for. The U.S. Chamber of Commerce, for instance, strongly opposed the health care legislation, making common cause with the tea party. But this month the chamber swung solidly behind Boehner’s original debt-ceiling bill. It suffered embarrassment with all the other groups and individuals forced to swallow the tea partyers’ demands.Republican campaign strategists are weighing the tea party’s valuable energy against the possibility that it might push the party away from mainstream politics, which appeal to crucial independent voters. A Pew Research poll found that 68 percent of American voters want lawmakers to compromise on the debt ceiling and default issue, even it means striking a deal they disagree with. Fewer than one in four said lawmakers should stand by their principles even if it leads to a default on U.S. obligations.Veteran lawmakers and congressional staffers are struck by the faith — be it admirable or naïve — that many tea party advocates seem to have in what they consider the moral rightness of their ideas. Some GOP staffers privately roll their eyes at accounts of House members insisting that Senate Democrats will suddenly come to their senses and embrace the balanced budget agreement, even though those senators have criticized the proposal for years.”I sure hope they don’t try to take out the balanced budget amendment in the Senate,” said Rep. Phil Gingrey, R-Ga. He refused to vote for the House debt-ceiling bill until it was added.Senate Majority Leader Harry Reid, D-Nev., barely conceals his disdain for such thinking. The key question, Reid said in a speech Friday, is „will today’s Republicans break away from the shrill voice of the tea party and return to the Republican Party of Ronald Reagan?”When a Democratic leader praises Reagan, it’s a sign of how profoundly the tea party movement has influenced the GOP._Associated Press writers Alan Fram and Steven Ohlemacher contributed to this report.

GEORGETOWN, Guyana (AP) — Flight 523 from New York had just touched down and passengers were applauding the pilot’s landing in the South American country Saturday when something suddenly went wrong.The Boeing 737-800 slid off the end of a rainy runway, crashed through a chain-link fence and broke in half just short of a deep ravine. Yet all 163 people on board survived.Officials were starting to probe the cause of the crash even as they marveled at the lack of fatalities.”We must be the luckiest country and luckiest set of people in the world to escape so lightly,” said 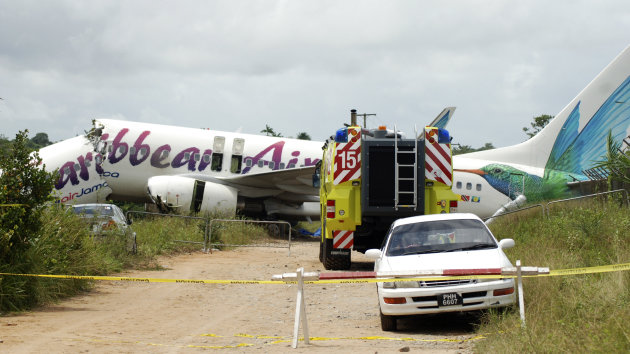 Health Minister Leslie Ramsammy, who said more than 30 people were taken to the hospital. Only three of those had to be admitted for a broken leg, bumps, cuts and bruises.The Caribbean Airlines plane had left John F. Kennedy International Airport Friday evening and made a stop in Trinidad before landing in Guyana. The airline said it was carrying 157 passengers and six crew members.Geeta Ramsingh, 41, of Philadelphia, recalled how applause at the arrival quickly „turned to screams.””The plane sped up as if attempting to take off again. It is then that I smelled gas in the cabin and people started to shout and holler,” she said.When the plane crumpled to a stop, Ramsingh said she hopped onto the wing and then onto the dirt road outside the runway fence.”A fellow who was trying to escape as well mistakenly jumped on my back and that is why my knees are bruised,” she said. „So I am in pain, but very thankful to be alive.”Nobody had yet showed up to rescue her, „but a taxi driver appeared from nowhere and charged me $20 to take me to the terminal. I had to pay, but in times of emergencies, you don’t charge people for a ride,” she said, sitting on a chair in the arrival area surrounded by relatives. She was returning to her native country for only the second time in 30 years.Adis Cambridge, 42, of Guyana, said she felt the thump of a hard landing but did not think much of it until seconds later.”I realized that everything was on top of me, people and bags. I was the second to last person to get off that plane in the dark,” she said, surrounded by her two young children who had come to the airport to meet her after a brief holiday in the U.S.”I hit my head on the roof. It was so scary,” she said, and described jumping from the wing to the dirt road below as crews with flashlights and beams from fire engines searched for passengers.”I thought I would have died. I just started to cry,” she said.The plane came to rest off the end of the 7,400-foot (2,200-meter) runway at Cheddi Jagan International Airport, which sits on a ridge in forested region just south of the oceanfront capital of nearly 300,000 people.Authorities struggled at first to remove passengers without adequate field lights and other emergency equipment.The plane stopped a little short of a 200-foot (60-meter) ravine that could have resulted in dozens of fatalities, said President Bharrat Jagdeo.”We are very, very grateful that more people were not injured,” said Jagdeo, who came to the crash site before dawn.George Nicholas, Caribbean Airlines chairman, told reporters that officials with the U.S. National Transportation Safety Board are scheduled to arrive Sunday in Guyana to take over the investigation. He said investigators from Guyana and Trinidad, the airline’s base, will help.He said the airline is arranging for counselors to meet with passengers.Authorities temporarily closed the Guyana airport, leaving hundreds of passengers stranded and delaying dozens of flights. The main terminal reopened late Saturday morning to only a couple of small planes, including a LIAT airline bound for Barbados, said Orin Walton, a local representative for the Antigua-based carrier.The crash of Flight 523 is the worst in recent history in Guyana, and only one of the few serious incidents involving the Trinidad-based airline. It is the single largest carrier in the region, operating at least five daily flights._Associated Press Writer Tony Fraser in Port-of-Spain, Trinidad contributed to this report.