Carlotta grew into a powerful Category 2 hurricane on Friday as it neared Mexico’s southern Pacific coast, where it is expected to brush the resort town of Puerto Escondido and then lash Acapulco.Authorities in Oaxaca state opened emergency shelters, evacuated dozens of families from low-lying areas and tourists began leaving Puerto Escondido, a laid-back port popular with surfers. Rains were already hammering Puerto Escondido and authorities said winds had toppled hundreds of trees in the region.”The thinner trees are beginning to fold from the wind,” said Oscar Trujillo, owner of the La Casita restaurant in Puerto Escondido.Oaxaca’s civil protection service said mudslides road leading to the resorts of Huatulco and Pochutla were partially blocked by mudslides. Hotel owners in the region’s resorts were gathering up furniture and other potential flying objects in preparation for the hurricane.Rain had begun falling in the Pacific resort of Acapulco. A hurricane warning was in effect for a stretch of coastline from Salina Cruz, Oaxaca to Acapulco in neighboring Guerrero state.Carlotta’s center was about 10 miles (20 kilometers) southwest of Puerto Angel and 225 miles (365 kilometers) southeast of Acapulco Friday night, with winds of 105 mph (165 kph), according to the U.S. National Hurricane Center in Miami. It was moving northwest at 12 mph (19 kph), the center said.Ines Vos, a German who has lived on Mexico’s coast for 22 years and now runs the Beach Hotel Ines in Puerto Escondido, said she had readied the hotel’s generator and stocked up on gasoline and bottled water in preparation for the storm.”In the morning, a lot of people left, they didn’t want to stay because nobody knows how the roads will be” after Carlotta lashes the town, said Vos, who lived through Hurricane Pauline in 1997. Pauline made landfall at Puerto Escondido with winds of 109 mph, killing at least 230 people along the Pacific coast.The part of Oaxaca state and neighboring Guerrero state that the storm will graze is full of mountainous terrain that can experience flash floods under heavy rainfalls. Carlotta was expected to follow a path parallel to the coastline over Saturday and Sunday, dumping heavy rains.Cynthia Tovar, a spokeswoman for the Oaxaca state civil defense office, said authorities had begun to open nine emergency shelters and cancelled classes in coastal towns. Authorities were telling people in high-risk areas to head to the shelters, which can hold an estimated 4,500 people.However, Vos, who spent about a week without electricity after Pauline in 1997, said people appeared to be slow to prepare for Carlotta.”They are warning people, but I don’t see anybody moving,” Vos said.

tightrope walk across the Niagara Falls is astounding for two reasons—and not just for traipsing in leather-soled slippers across a two-inch-thick wire 170 feet above tumbling waters. The gorge, after all, has been rope-walked 16 times (11 have survived), although not for the last two centuries, and Nik already has two Guinness records, one with his family and a solo one for traveling the longest distance and greatest height by bicycle on a wire.The first bewildering fact is that seven Wallenda generations have survived a familial predisposition to hover high in the air above certain death. The second is even more astonishing: how a 21st-century audience might still marvel at a man who considers courting death a performance art. Audiences are gathering, and searches on Yahoo! have been breathlessly rising about the stunt and the Wallenda name („nik wallenda niagara falls,” „wallenda,” „niagara falls tightrope,” „the flying wallendas”).In our pleasure palace of cinematic body doubles, televised jackassery, and digitized adventures, Nik’s a throwback to those days of daredevils who performed for live audiences. While even a Wallenda has to compromise for sponsors (he’s wearing a harness), his trip to Niagara reminds us what the human body can still do, given the obsession, the opportunity, and a few generations of persistence.[Related: Nik Wallenda’s stunt for the ages]Daredevilry, a history: Devil-may-care antics go back as long as man has been around. Often invention and thrillseekers were one, How Stuff Works explains: Frenchman Andre-Jacques Garnerin created the first hot-air balloon and promptly leapt 3,200 feet from one and 8,000 from another, becoming the first parachutist. (His wife Jeanne-Genevieve Garnerin was the first female parachutist.) Ascending great heights was the trick of barnstormers following World War I, and a few pilots decided to walk wings and do trapeze acts. The first human cannonballin 1877 was a 14-year-old girl, who later traveled with the P.T. Barnum Circus. 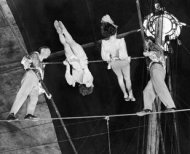 The Flying Wallenda in 1944 (AP)A funambulist family: The Wallenda name has been associated with risk and showmanship back at least to the late 1790s, when the Austrian-Hungarian family traveled about the region showing feats of derring-do, acrobatics, and even animal training. They burst into the American imagination and camped there in 1928 after a Ringling Bros. and Barnum & Bailey Circus performance that reportedly gained a 15-minute standing ovation. In the 1940s, the seven-person chair pyramid atop a high wire emerged as „The Flying Wallendas” signature piece. 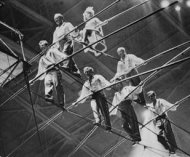 Flying Wallenda pyramid, 1962 (AP)Nik Wallenda’s technically a Troffer: His father is Terry Troffer and his mother Delilah Wallenda, but maternal family acclaim trumps patrilineage. Showmanship runs in his blood from both sides: His parents recreated the seven-person pyramid in 1998. Nik’s wife Erendira comes from generations of circus performers (in her case, the flying trapeze), and the two perform „water stunts, diving, and other daredevil exploits.” Troffer or Wallenda, a high-flying legacy seems guaranteed:

Nik and Erendira have three children, Yanni, Amadaos, and Evita, who, stunningly, have DNA passed down from 25 generations of circus performers. Which leads to the family’s most ambitious dream: for Nik to honor the memory of his great-grandfather Karl, and walk across the Grand Canyon. He has already secured the permits. (Nik Wallenda website)

Nik Wallenda (Reuters)Victorian masculinity in the modern age?: How does an old-fashioned daredevil survive in a postmodern world? „We live in an amplified culture of celebrity, where there are all kinds of ways to hijack attention,” Northwestern University assistant professor Jacob Smith, who wrote „The Thrill Makers: Celebrity, Masculinity, and Stunt Performance,” tells Yahoo!. „[Wallenda’s stunt] does seem like an anachronistic performance in this day and age.” Daredevils peaked at the turn of the century before Hollywood stole their thunder, and some became relegated to stunt doubles while actors claimed the fame.

In our risk-averse days, stuntmen take pains to say how their technical expertise makes seemingly heart-pumping actions quite safe. Computer artists diminish jeopardy even more. Then you have the „Jackass” reality that embraces and ridicules peril. Male audiences may still drawn to male risk-takers but „we don’t feel the same way about male heroism,” Smiths says. „It seems kind of goofy or out of place.” Nik, in the meantime, seems a quaint „Victorian embodiment of bravery.”

Crowds gather at Niagara (AP)Daredevil optimism: As for Nik’s venture to Niagara, Smith says of daredevils, „They all go to the falls eventually.” Its sheer immensity isn’t just a challange, but a way of showing how a single human being can conquer a natural phenomenon. The urban space equivalent is bridge-jumping and scaling skyscrapers—such as when Philippe Pettit strung a wire between the Twin Towers in 1974, later inspiring the Oscar-winning documentary „Man on Wire.”

Challenging mortality is optimistic? That is what has pushed the Wallendas for seven generations and daredevils across the ages—a sense of showmanship, dreams, and a crazy optimism about what the human body can do against any obstacle, natural or manmade. „It’s more anticipation and eagerness,” Nik said at a press conference, but it’s coming down to the wire, no pun intended…There may be some tears because this is a dream of mine.”

New Crustacean Species Discovered Off Spain By OurAmazingPlanet Staff | LiveScience.com – 7 hrs ago A new species of crustacean has been discovered in the underwater mountains off the northwest coast of Spain, scientists recently announced.The squat lobster is orange and a little over 2 inches (5 centimeters) long. Squat lobsters are more closely related to porcelain and hermit crabs than true lobsters.It was discovered at a depth of 4,626 feet (1,410 meters) in August 2011 by the INDEMARES research group and lives among deep corals and sea fans, according to a study published in the March issue of the journal Zootaxa.The shy crustaceans are abundant in submarine mountains in areas that haven’t been heavily fished; the corals and sea fans amid which they live tend to disappear in trawling zones, researchers said in a statement.Given the scientific name Uroptychus cartesi, the species’ closest relative can be found in the Caribbean Sea, and both species likely have a shared ancestor „who invaded the Atlantic from the Pacific and Indian Ocean a few million years ago,” said study co-author Enrique Macpherson, a researcher at Spain’s Centre for Advanced Studies of Blanes.The squat lobsters are homebodies and do not spread far, since their larvae spend only a few days in the free-swimming planktonic stage. They feed on smaller crustaceans and particulate matter.The crustcean is different from other European species mainly because of its shape and the number of thorns on its shell.Researchers named it after the scientist Joan Cartes, from Barcelona’s Institute of Marine Sciences, who was the first to notice that something about these creatures looked different.The six specimens captured were handed over to Barcelona’s Institute of Marine Sciences and the National Museum of Natural History in Paris.