end in a few days with a widespread drought avoided, latest weather data showed, as the crucial rains picked up from the end of August to help summer-sown crops and boost prospects for the major food producer’s winter grains harvest.The rains – crucial for more than half the country’s farmland – were 36 percent below average in the week to September 26, the weather office said on Thursday.Rains were 44 percent above average in the previous week after the heaviest downpours seen during the monsoon season.They were deficient – a drought, in layman’s terms – in the first half of the June-September season, but the late revival has alleviated the situation in much of the country with just a few states still suffering dry conditions.The government’s first estimates suggest India’s summer-sown rice, corn and other grain crops could be down about a tenth from a year ago because of the poor early start to the rains, but no ban on exports of agri-commodities is expected.Agriculture Minister Sharad Pawar urged farmers this week to take advantage of the late-landing rain and plant their winter crops early to boost yields in wheat and rapeseed.”We must take advantage of revival in rains and improvement in soil moisture and encourage farmers to go for early sowing of winter crops and more than make up for the loss in kharif (summer-sown),” Pawar said.India monsoon graphics suite – http://graphics.thomsonreuters.com/12/MNSN/Monsoon.html  Four straight weeks of heavier rains than normal from the last week of August have helped India, one of the world’s leading producers and consumers of farm commodities, escape a prolonged large-scale drought.”This year’s monsoon has evaded a nationwide meteorological drought due to a dramatic late turnaround, but some states have faced drought,” said S. C. Bhan, a director at the Indian weather office.The country last faced a severe widespread drought in 2009 and had to import sugar, pushing global prices to 30-year highs. This year, drought has hit lentils and cereal crops in some states. Overall, rains are now just 7 percent below average in the entire season.The monsoon has already retreated from Rajasthan, slightly late but indicating prolonged rains that can damage harvests of summer-sown crops were unlikely. The rains are expected to continue in the northeast until the end of the month.India’s weather office expects the monsoon to completely withdraw from the northwest parts of the country by the weekend.”Overall weather conditions will be dry in most parts of the country from early next week,” Bhan said.Rains below 90 percent of a 50-year average are termed deficient by the weather office.(Editing by Jo Winterbottom and Catherine Evans) 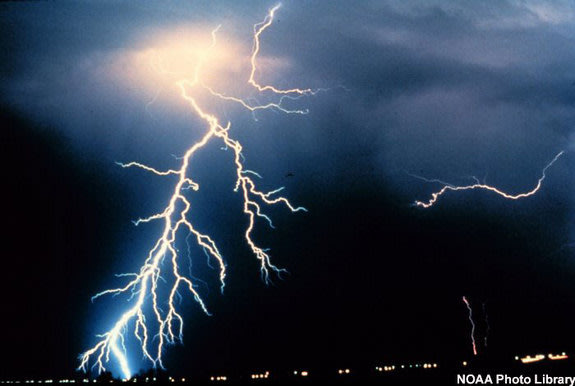 each day, delivering as many as 100 lightning bolts to the ground every second. These dramatic, deafening flashes of electricity recharge the global battery by keeping the ground flush with negative electric chargeand maintaining the ionosphere’s positive charge. Lightning turns the Earth into an electric circuit, and it may have even delivered the spark that got life started in the primordial soup.But for all we know, lightning might as well come from Zeus. Counting Ben Franklin’s kite-and-key experiment as the starting point, 250 years of scientific investigation have yet to get to grips with how lightning works.Atmospheric scientists have a basic sketch of the process. Positive electric charges build up at the tops of thunderclouds and negative charges build up at the bottoms (except for perplexing patches of positive charges often detected in the center-bottom). Electrical attraction between these opposite charges, and between the negative charges at the bottom of the cloud and positive charges that accumulate on the ground below, eventually grow strong enough to overcome the air’s resistance to electrical flow.Like a herd of elephants wading across a river, negative charges venture down from the bottom of the cloud into the sky below and move haltingly toward the ground, forming an invisible, conductive path called a „step leader.” The charges’ path eventually connects to similar „streamers” of positive charges surging up from the ground, completing an electrical circuit and enabling negative charges to pour from the cloud to the ground along the circuit they have formed. This sudden, enormous electric discharge is the flash of lightning. [Infographic: How Lightning Strikes]ut as for how all that happens — well, it just doesn’t make much physical sense. There are three big questions needing answers, said Joe Dwyer, a leading lightning physicist based at the Florida Institute of Technology. „First, how do you actually charge up a thundercloud?” Dwyer said. A mix of water and ice is needed to provide atoms that can acquire charge, and updrafts are required to move the charged particles around. The rest of the details are hazy.One theory holds that high-energy cosmic rays from space shoot down through the cloud, stripping off electrons from atoms as they go and dragging these negatively charged particles toward the cloud base, creating a charge imbalance. Dwyer said that although this process may play a role, it doesn’t seem sufficient to explain the huge imbalance that scientists observe.The consensus among scientists, he told Life’s Little Mysteries, is that charge separation is mainly achieved in a process called „non-inductive charging mechanism.””You have a mixed phase of ice and water up above 5 kilometers [3 miles] or so, and somehow those interact with each other and you have some kind of precipitation, and you have updrafts blowing up,” he said. „Somehow the ice and water interact and manage to separate into oppositely charged particles. The lighter particles acquire positive charge and get blown to the top, and the heavier ones are negative and fall down.”That aforementioned positive patch near the bottom of the cloud remains a head-scratcher. [The Biggest Unsolved Mysteries in Physics]The second point of confusion is called the „lightning initiation problem.” Measurements of the electric fields inside thunderclouds have consistently yielded peak values that are an order of magnitude weaker than is needed to break down the insulating properties of air. Man-made spark plugs require a much bigger electric field, or voltage difference between one electrode and the other in order for a current to tear across the gap. So the question is, „How do you get a spark going inside a thunderstorm? The electric fields never seem to be big enough inside the storm to generate a spark. So how does that spark get going? This is a very active area of research,” Dwyer said.And once the spark gets going, the final question is how it keeps going. „After you get it started, how does lightning propagate for tens of miles through clouds?” Dwyer said. „That’s an amazing thing — how do you turn air from being an insulator into a conductor?”Lightning confounds much of scientists’ understanding of basic physics. But according to Dwyer, progress has recently picked up the pace. „We have a lot of ways of measuring lightning and storms that weren’t available a few years ago. We can look at the radio signals coming out of them. We can trigger lightning, so that we can know where to point our cameras and instruments. Ten years ago we realized that lightning produces X-rays and gamma rays, which was unexpected. This has given us new insight into what’s going on. So we’re making a lot of progress.”As of yet, it seems Zeus’ wrath has technically not been ruled out.