A tornado swept through a fairground in a Spanish town, knocking down a

Ferris wheel and injuring 35 people, while the death toll from flooding in the same southern region of the country rose to 10, authorities said Saturday.Friday’s tornado damaged several rides and

cut electricity in the temporary fair set up in the main square of Gandia, according to its town hall website. It said 15 of the injured were seriously hurt, all of whom were treated on site.Local media reported the

fair in Valencia province was closed to the public at the time of a thunderstorm and that all the injured were fair workers.Just inland from the Mediterranean coastal town, five more victims of Friday’s

flash floods southwest of Gandia were found overnight. They included a middle-aged woman in the town of Lorca.Last summer, Lorca was hit by Spain’s deadliest earthquakes in more than 50 years, leaving

nine dead.A spokeswoman for the regional government of Andalucia told

The Associated Press on Saturday that the heavy downpours and resulting high waters had claimed the lives of five people in the province of Murcia, three in Almeria and two in Malaga.The spokesman,

speaking on condition of anonymity in keeping with government policy,

said a 52-year-old British woman was missing in Almeria as well as one homeless man. Five people originally declared missing had been found alive.Local media reported that hundreds of citizens had

to be evacuated throughout the region.The flooding disrupted high-speed train service between Madrid and Valencia, and various regional lines, while bridges and roads were also made impassible.The heavy rains which started Friday morning were expected to continue throughout Saturday, with the front moving north toward Catalonia and the Balearic Islands. 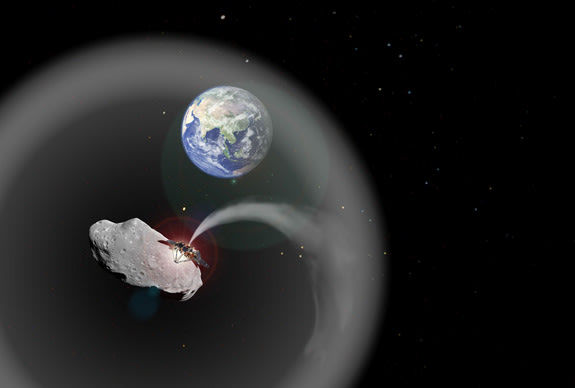 To combat global warming, scientists in Scotland now suggest an out-of-this-world solution — a giant dust cloud in space, blasted off an asteroid, which would act like a sunshade for Earth.The world is warming and the climate is changing. Although many want to prevent these shifts by reducing emissions of greenhouse gases that trap heat from the sun, some controversially suggest deliberating manipulating the planet’s climate with large-scale engineering projects, commonly called geoengineering.Instead of altering the climate by targeting either the oceans or the atmosphere, some researchers have suggested geoengineering projects that would affect the entire planet from space. For instance, projects that reduced the amount of solar radiation Earth receives by 1.7 percent could offset the effects of a global increase in temperature of 3.6 degrees F (2 degrees C). The United Nations’ Intergovernmental Panel on Climate Change (IPCC) has noted climate models suggest average global temperatures will likely rise by 2 to 11.5 degrees F (1.1 to 6.4 degrees C) by the end of this century.”A 1.7 percent reduction is very small and will hardly be noticeable on Earth,” said researcher Russell Bewick, a space scientist at the University of Strathclyde in Scotland. „People sometimes get the idea of giant screens blocking the entire sun. This is not the case … as [the device] is constantly between the sun and the Earth, it acts merely as a very light shade or filter.”Shading Earth-One proposal to shade the Earth from the sun would place giant mirrors in space. The main problem with this concept is the immense cost and effort needed either to build and launch such reflectors or to construct them in outer space — the current cost to launch an object into low Earth orbit runs into thousands of dollars per pound. Another would use blankets of dust to blot out the sun, just as clouds do for Earth. These offer the virtue of simplicity compared with mirrors, but run the risk of getting dispersed over time by solar radiation and the gravitational pull of the sun, moon and planets. [Top 10 Craziest Environmental Ideas]Now instead of having a dust cloud floating by itself in space, researchers suggest an asteroid could essentially gravitationally anchor a dust cloud in space to block sunlight and cool the Earth.”I would like to make it clear that I would never suggest geoengineering in place of reducing our carbon emissions,” Bewick told LiveScience. Instead, he said, „We can buy time to find a lasting solution to combat Earth’s climate change. The dust cloud is not a permanent cure, but it could offset the effects of climate change for a given time to allow slow-acting measures like carbon capture to take effect.”The idea would be to place an asteroid at Lagrange point L1, a site where the gravitational pull of the sun and the Earth cancel out. This point is about four times the distance from the Earth to the moon.The researchers suggest outfitting a near-Earth asteroid with a „mass driver,” a device consisting of electromagnets that would hurl asteroid-derived matter away from the giant rock. The mass driver could serve both as a rocket to push the asteroid to the L1 point and as an engine to spew out sun-shielding dust. [5 Reasons to Care About Asteroids]The researchers calculate that the largest near-Earth asteroid, 1036 Ganymed, could maintain a dust cloud large enough to block out 6.58 percent of the solar radiation that would normally reach Earth, more than enough to combat any current global warming trends. Such a cloud would be about 11 million-billion pounds (5 million-billion kilograms) in mass and about 1,600 miles (2,600 kilometers) wide.Ganymed has a mass of about 286 million-billion lbs. (130 million-billion kg). An asteroid of this size might make one think of disaster movies, such as „Armageddon”; however, „rather than destroying the Earth, it could be used to help mankind,” Bewick said.Asteroid dust challenges-The main challenge of this proposal would be pushing an asteroid the size of Ganymed to the sun-Earth L1 point.”The company Planetary Resources recently announced their intention to mine asteroids,” Bewick said. „The study that they base their plans on reckons that it will be possible to capture an asteroidwith a mass of 500,000 kilograms (1.1 million lbs.) by 2025. Comparing this to the mass of Ganymed makes the task of capturing it seem unfeasible, at least in everything except the very far term. However, smaller asteroids could be moved and clustered at the first Lagrange point.”Safety is another concern.”A very large asteroid is a potential threat to Earth, and therefore great care and testing would be required in the implementation of this scenario,” Bewick said. „Due to this, the political challenges would probably match the scale of the engineering challenge. Even for the capture of much smaller asteroids, there will likely be reservations from all areas of society, though the risks would be much less.”Also, there’s no way to fully test this dust cloud on a large scale to verify its effectiveness before implementing it, „something that is common to all geoengineering schemes,” Bewick said. „On the global scale, it is not possible to test because the test would essentially be the real thing, except probably in a diluted form. Climate modeling can be performed, but without some large-scale testing, the results from these models cannot be fully verified.”Still, if geoengineers did use asteroids to generate clouds, they could drastically reduce how much dust the projects spew out „should any catastrophic climate response be observed,” Bewick said, „with the cloud dispersing naturally over time.”

The NASA rover Curiosity has beamed back pictures of bedrock that suggest a fast-moving stream, possibly waist-deep, once flowed on Mars — a find that the mission’s chief scientist called

exciting.There have been previous signs that water existed on the red planet long ago, but the images released Thursday showing pebbles rounded off, likely by water, offered the most convincing evidence so far of an ancient streambed.There was „a vigorous flow on the surface of Mars,” said chief scientist John Grotzinger of the California Institute of Technology. „We’re really excited about this.”The discovery did not come as a complete surprise. NASA decided to plunk Curiosity down inside Gale Crater near the Martian equator because photos from space hinted that the spot possessed a watery past. The six-wheeled rover safely landed Aug. 5 after a nail-biting plunge through the Martian atmosphere. It’s on a two-year, $2.5 billion mission to study whether the Martian environment could have been favorable for microbial life.Present day Mars is a frozen desert with no hint of water on its radiation-scarred surface, but geological studies of rocks by previous missions suggest the planet was warmer and wetter once upon a time.The latest evidence came from photos that Curiosity took revealing rounded pebbles and gravel — a sign that the rocks were transported long distances by water and smoothed out.The size of the rocks — ranging from a sand grain to a golf ball — indicates that they could not have been carried by wind, said mission scientist Rebecca Williams of the Planetary Science Institute in Tucson, Ariz.Though Curiosity did not use its high-tech instruments to drill into the rocks or analyze their chemical makeup, Grotzinger said scientists were sure that water played a role based on just studying the pictures.It’s unclear how long the water persisted on the surface, but it easily could have lasted „thousands to millions of years,” said mission scientist Bill Dietrich of the University of California, Berkeley.Curiosity chanced upon the dried-up streambed while driving to Glenelg, an intriguing spot where three types of terrain meet. Its ultimate destination is Mount Sharp, a mountain rising from the center of crater floor, but it was not expected to travel there until the end of the year.Finding past water is a first step toward learning whether the environment could have supported microbes. Scientists generally agree that besides water and an energy source such as the sun, organic carbon is a necessary prerequisite for life.While an ancient streambed holds promise as a potentially habitable environment, scientists don’t think it’s a good place to preserve the carbon building blocks of life. That’s why the rover will continue its trek to the foothills of Mount Sharp where there’s a better chance of finding organics._Alicia Chang can be followed at http://twitter.com/SciWriAlicia

Is the Gospel of Jesus’ Wife a Forgery? By Natalie Wolchover | LiveScience.com – 5 hrs ago A scrap of papyrus from the early Christian 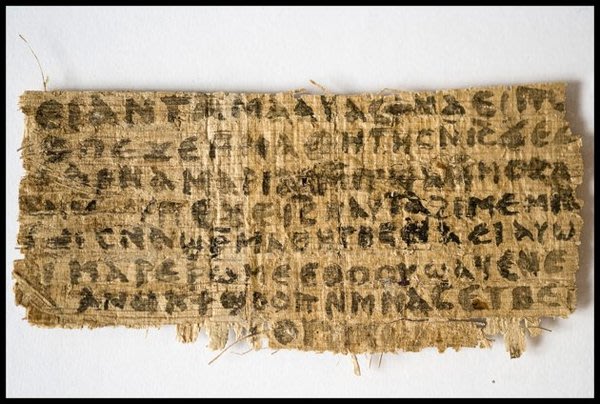