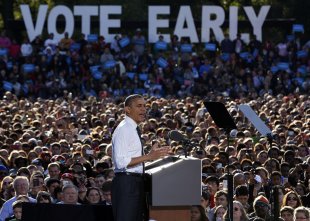 President Barack Obama speaks to a rally in The Oval at Ohio State University in Columbus, Ohio. (Larry Downin …COLUMBUS, Ohio—President Barack Obama charged on Tuesday that Mitt Romney favors a foreign policy that „gets us into wars with no plan to end them” and that if the Republican had his way American combat forces would still be in Iraq.”Governor Romney said it was tragic to end the war in Iraq. I disagree. I think bringing our troops home to their families was the right thing to do,” Obama told some 15,000 cheering supporters on the campus of Ohio State University.”If he’d gotten his way, those troops would still be there. In a speech yesterday, he doubled down on that belief, he said ending that war was a mistake. After nine years of war, more than $1 trillion in spending, extraordinary sacrifices by our men and women and their families, he said we should still have troops on the ground in Iraq,” Obama said.”Well, you can’t turn the page on the failed policies of the past if you’re promising to repeat them. We cannot afford to go back to a foreign policy that gets us into wars with no plan to end them. We’re moving forward, not going back,” the president said.In fact, the Obama administration held extensive talks with Iraq’s government in an attempt to leave a contingent of combat forces there. Those negotiations failed, in part, because Baghdad refused to grant American troops and other personnel legal immunity from prosecution in Iraqi courts. The United States has not quite 300 troops on the ground today to help train Iraqi security forces.In November 2011, the former Massachusetts governor branded the Democrat’s timetable as „precipitous” and „tragic” and warned that „it puts at risk many of the victories that were hard won by the men and women who served there.” Those warnings were commonplace among Republican critics of Obama’s approach.Romney made that point again in a major speech on foreign policy at the Virginia Military Institute on Monday.”In Iraq the costly gains made by our troops are being eroded by rising violence, a resurgent al-Qaida, the weakening of democracy in Baghdad and the rising influence of Iran. And yet America’s ability to influence events for the better in Iraq has been undermined by the abrupt withdrawal of our entire troop presence,” he said.In fact, the departure date was first set by former President George W. Bush in a status-of-forces agreement he signed in late 2008. That accord specified that American forces would have to leave by the end of 2011.Wave after deadly wave of violence in Iraq, however, has underlined how the withdrawal of American forces does not mean the end of a war—merely the end of the American involvement in it.Pressed on this point by Yahoo News at a briefing last week, White House spokesman Jay Carney said that „the president promised to responsibly end our war in Iraq, the United States military operation in Iraq.  He did that and our troops came home.” (Note: „our war.”)”We maintain an incredibly important and robust relationship with Iraq and the Iraqi government and Iraqi leaders,” Carney said. „And we work with them all the time on both matters of mutual concern, regional issues, diplomatic issues, matters of economic growth and development, as well as matters where we can be of assistance on political reconciliation.””It is absolutely the case that there is still violence in Iraq. It is also the case that throughout the last several years since President Obama has been in office, at key moments when Iraq’s leaders have had to make choices about the future they want to pursue in Iraq and that they want for the Iraqi people, they have chosen politics over violence,” Carney said.”And that is certainly the direction that we encourage them to take in our efforts, diplomatic efforts, with the Iraqi government and other Iraqi leaders. And we’ll continue to do that,” the spokesman said.Obama has repeatedly used Romney’s opposition of the Iraq withdrawal as a political weapon. The war that began in March 2003 grew more and more unpopular over the years, with larger numbers of Americans saying it was not worth fighting. Obama has been arguing that Romney would take the country back to the foreign policy of Bush’s first term.