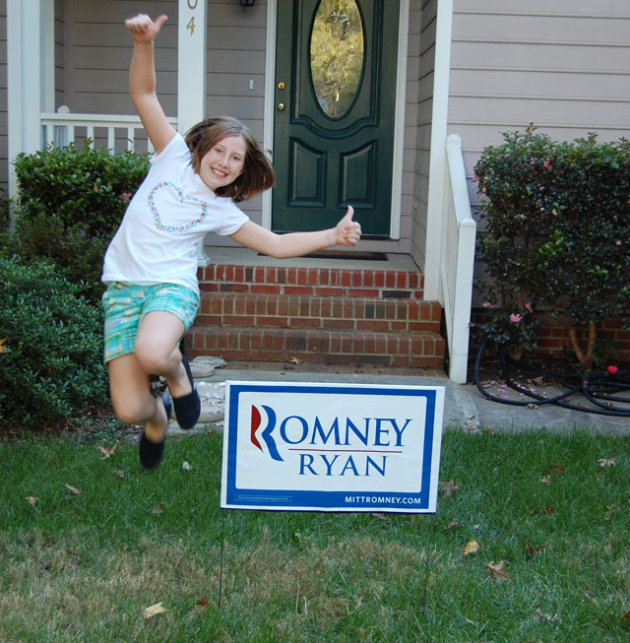 Jessica Turner of Raleigh, N.C., poses with the Romney sign outside her home. (Jim Turner) As Election Day approaches, Yahoo News has asked voters in swing states to share what it’s like being in the thick of things as President Barack Obama and GOP challenger Mitt Romney smother them with attention. This week, we look at North Carolina and Virginia, two Southern states that are being contested this year. In their own words and photos, voters shared their impressions. Here are some excerpts. Live in a swing state and want to share your story? Here’s how.

I thought it would be kind of cool to be in a swing state because of the national attention, but it turns out to be more hellish than expected.

It was great having the DNC here [but] now I just wish all things political would stop!

My wife and I are divided for president, so we’ll have to vote just to cancel each other out. I find [the division] to be pretty typical around here. I know several couples that way. (I’m not allowed to have any political sign, just because my wife would also [want to] have one.)

Not only do we see [more than eight] commercials a day, but 95 percent are attack ads, and it’s all negative. It makes you think that Obama will feast on the flesh of your children, and Romney is out to torture and kill fluffy bunny rabbits. I’m hoping that both are untrue, but with these political ads, it makes you think.

—Stuart Schafer, Charlotte, N.C., in an email to Yahoo News 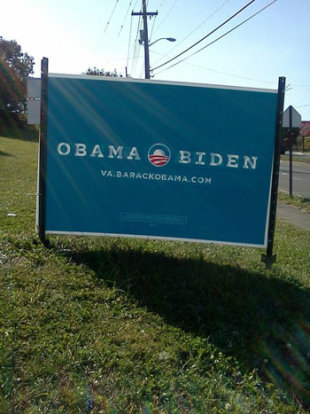 Living in our area is, at times, very difficult for those who are liberal.

Although I know there are Obama supporters around, I have only seen two Obama-Biden campaign signs as opposed to many Romney-Ryan signs around town.

There’s a lot of tension in our area over the election, and it seems very one-sided. On television, there are a lot of Romney commercials and a couple Obama commercials now. It seems like every commercial break [has] at least one political segment.

It’s a very isolating feeling to think that you are alone in your stance. I skirt around conversations that have to do with politics at my workplace and with my patients for fear of being discriminated against.

[But] I’m starting to not be so concerned about what people think anymore. It’s my right as an American to pick whoever I want to be president. That’s what makes our country so amazing: freedom.

My husband, his parents, and siblings are all voting to re-elect President Obama. As far as our friends, it’s about 80/20 [in Mitt Romney’s favor]. Many of them we know will vote for Romney, but there are a few who are moderate in their views and are leaning toward President Obama. Today I went to one of the early voting centers and placed my vote for President Obama. I feel so proud to be an American, to have the right to choose who I think best represents me, my beliefs and my hopes for our nation.

—Hilary Andrews, Pinehurst, N.C., in an email to Yahoo News

As happened in the previous three elections, when I put a Republican presidential candidate sign on my property, it’s vandalized.

I’ve learned that a way to reduce that vandalism is to line the edges of the sign with Vaseline, making its destruction a gooey, messy proposition. Sometimes vandals stop in mid-destruction, and I come home in the evening to a sign someone started to destroy but then stopped because their hands became a mess.

Since I clearly am making someone very upset, I of course decided that I need far more than one sign so I can get my point across even more clearly. I have asked for more signs, made more signs, and gotten more from neighbors. I am filling my yard. And lining them all with Vaseline. 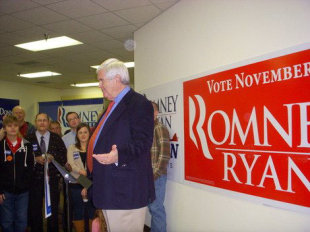 I go into a lot of houses in my job of dry cleaning carpets. … For the first time I can ever recall, I am seeing my customers are actually serious about [an] election.

No more do they try to out-promote the opposition candidate with a litany of talking points, as in past elections. [They use] a quiet voice and calm manner. They speak about the candidates in a conversational style, whereas in the past they would try to convince by boisterously emphasizing key points.

[While they] used to use a show of anger to convince, now it’s a quiet plea. A tone of gravity has somehow fallen upon my clients. They never ask me who I will be voting for, they simply make the whispered, almost resigned statement that „people need to get out and vote.”

— Charles Bright, Goldsboro, N.C., in an email to Yahoo News 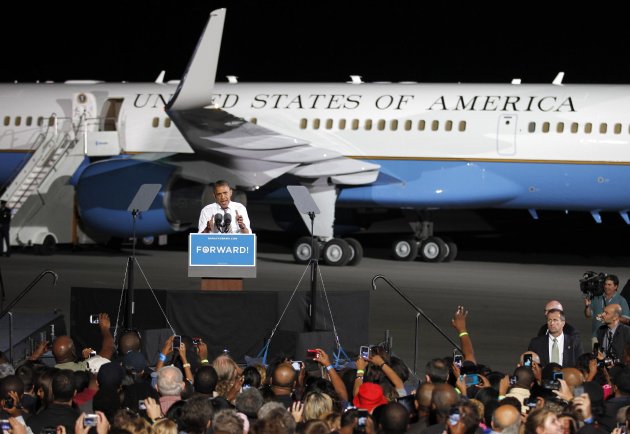 WASHINGTON (AP) — President Barack Obama and Republican Mitt Romney’s meticulously arranged travel schedules, a crucial element of their final-stretch strategies, could be upended in the last full week before Election Day by a super storm barreling toward some battleground states.And it’s more than just travel that could be disrupted. A confluence of high wind, heavy rain, extreme tides and maybe snow could make it harder for Americans to participate in early voting, an important part of both campaigns’ efforts, particularly for Obama.Romney and Vice President Joe Biden both canceled weekend campaign events in coastal Virginia Beach, Va., though their events in other parts of the states were going on as planned.”The campaign is closely monitoring the storm and will take all necessary precautions to make sure our staff and volunteers are safe,” said Adam Fetcher, an Obama campaign spokesman.The storm couldn’t come at a worse time for the presidential campaigns. Both have enormous resources invested in getting voters to the polls before Election Day, as they try to use early voting to boost turnout among their supporters. And opportunities for the candidates to make personal appeals to voters in competitive states were already dwindling, even before the campaign faced the prospect of having to cancel stops because of the storm.Parts of Ohio, Virginia and North Carolina — all battleground states — are in the path of the storm, which is forecast to start Sunday and stretch past Wednesday. New Hampshire, another battleground, could also be affected. Air travel could become a mess, making flying elsewhere a nightmare.As of Friday afternoon, Obama’s campaign had no plans to cancel any of the president’s upcoming trips. He’s scheduled to be in New Hampshire on Saturday. With stops planned Monday in Florida, Ohio and Virginia, he moved up his departure for Orlando from Washington to Sunday. He also still plans to spend Tuesday in Colorado and Wisconsin and Wednesday in Ohio.The president could come under more pressure than his Republican rival to cancel events if the storm requires mobilizing the government resources he oversees. But that could also provide him an opportunity to show command in a crisis, and perhaps win over some late-breaking voters.Romney was scheduled to campaign this weekend in Florida, as well as Virginia. He also had a stop planned in Wisconsin Monday.The states where the candidates plan to travel in the campaign’s final days offer the clearest insight into their potential pathways to reaching the required 270 Electoral College votes.That’s why Air Force One and Romney’s campaign plane have been making frequent stops in Ohio, a state both campaigns are aggressively pursuing.If Romney loses Ohio, he would have to win nearly every other competitive state in order to reach 270. He spent three straight days in the Midwestern battleground this week, including a trio of events across the state on Thursday. Obama has traveled to Ohio more than any other state. He’s been there 18 times this year and has at least two stops planned next week.”Ohio, I believe in you. And I need you to keep believing in me,” Obama said Thursday during a rally in Cleveland, with Air Force One serving as a backdrop. He said „Ohio” 26 times in a 25-minute speech.Travel also tells the story in North Carolina, perhaps the hardest state for Obama to win. The president hasn’t visited the state since wrapping up his party convention in Charlotte seven weeks ago. Meanwhile Romney, signaling confidence in North Carolina, held a rally earlier this month in Asheville, a Democratic-leaning area of the state.Obama advisers insist they can pull out a close win in North Carolina. But they know North Carolina is unlikely to be the state that determines if Obama hits the 270 threshold. So they would rather have him campaign in the states that could be crucial, like Nevada, Iowa and Wisconsin, in addition to Ohio.On Thursday, the campaign passed the $2 billion mark, signaling a finance system vastly altered by the proliferation of outside groups and „super” political committees that are bankrolling a barrage of TV ads in battleground states.That means neither campaign is facing the type of fall financial squeeze that previously has turned the final weeks of presidential races into something of a chess match. Campaigns often signaled their strategies by pulling money and staff out of states that are moving away and dumping more resources into states that were competitive.Both campaigns say they keep spending money in all nine competitive states — Colorado, Florida, Iowa, Nevada, New Hampshire, North Carolina, Ohio, Virginia and Wisconsin — through Election Day. Both also have added small amounts of advertising time in a 10th state, Minnesota._Follow Julie Pace at http://twitter.com/jpaceDC and Ken Thomas at http://twitter.com/AP_Ken_Thomas