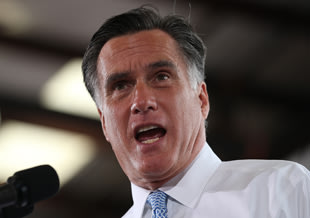 (Justin Sullivan/Getty Images)FINDLAY, Ohio—Mitt Romney is cancelling yet another event amid worries over the impact of Hurricane Sandy.The Romney campaign announced Sunday it would cancel a Tuesday evening rally in Milford, N.H—a stop that would have been Romney’s first visit to the swing state in more than a month.Rick Gorka, a Romney spokesman, said the event was canceled „due to the concern for the well-being of residents in the path of Hurricane Sandy.”It’s the second state where Romney has been forced to scrap events in the wake of Sandy, which is expected to make landfall in a few hours. Romney had been scheduled to campaign in Virginia today. But he cancelled three planned rallies throughout the state and instead flew from Florida to Ohio, where he’s been campaigning with running mate, Rep. Paul Ryan.Speaking at a rally here, Romney began his remarks by noting that Americans are „nervous” over the impending storm and urged supporters to think of those in the storm’s path.”Our thoughts and prayers are with the people who will find themselves in harm’s way,” Romney said.Romney’s decision comes just hours after the White House announced Vice President Joe Biden would cancel his own Granite State rally, scheduled for Monday.The GOP nominee’s cancellation comes at a pivotal time in the campaign. Polls in the state have found Romney in a dead heat with President Barack Obama in the state. But the GOP nominee hasn’t visited the state since Sept. 7.