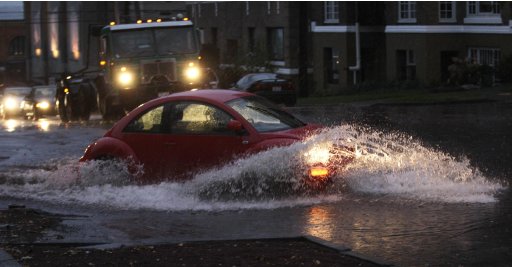 View Photo Cars and trucks navigate
through standing water, Monday, Nov. 19, 2012, at an intersection in Tacoma, …

View PhotoSchool children huddle under umbrellas as they wait to cross a street during an outing Monday, Nov. 19, …

View Photo Visitors to downtown Seattle huddle under umbrellas while walking in the shopping district Monday, Nov. …SEATTLE (AP) — A storm bearing down on the Pacific Northwest has taken the life of an elk hunter on the Oregon Coast and hit the region with mudslides, high winds and mountain snow.Chief Perry Sherbaugh of Nehalem Bay Fire and Rescue in Oregon says a fir tree crashed on the hunter’s tent Monday, killing him instantly. Wind gusts of more than 70 mph have been reported along the coast.Meanwhile, a mudslide carried a tree into a Washington State Patrol trooper’s car and another vehicle, causing both to start burning.The trooper, who crawled out of his car and escaped uninjured, was able to free the driver of the other car. She was left with a sore neck.The National Weather Service says more Pacific storms that started rolling across the region over the weekend are expected through Thanksgiving week. 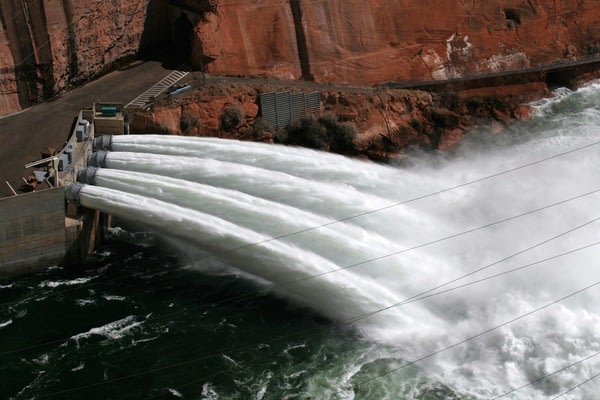 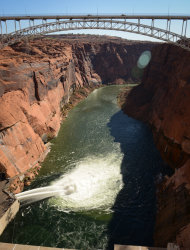 View Photo Jet tubes releasing Colorado River water Nov. 19 during a high-flow release at Glen Canyon Dam, the first …The Colorado River cascaded in a flood from the Glen Canyon Dam Monday (Nov. 19), the first step in an ongoing experiment to rebuild beaches and fish habitat in the iconic Grand Canyon.Interior Secretary Ken Salazar opened the dam’s bypass tubes at noon Mountain Time, releasing a spectacular display of gushing water. The six-day flood started ramping up Sunday night (Nov. 18) at 11 p.m. MT, and the peak-flow of 42,000 cubic feet (1,189 cubic meters) per second is scheduled to last from 9 p.m. Monday night through 10 p.m. on Tuesday, according to a statement from the Bureau of Reclamation.”This is truly an historic milestone for the Colorado River, Grand Canyon National Park, and the United States Bureau of Reclamation,” Salazar said. „This new protocol developed by Reclamation will protect both the Grand Canyon and the delivery of water for communities, agriculture and industry,” he said.The water release from Glen Canyon Dam is the first of many simulated floods planned by the Department of the Interior through 2020. The floods, or „high-flows,” are an effort to restore the river’s natural environment for both tourists and wildlife in the Grand Canyon.”These high-flow releases, a new paradigm in water management, recognize that there are hugely beneficial impacts to river ecology from releasing the requisite water needed downstream in large pulses, rather than uniformly throughout the year,” said U.S. Geological Survey Director Marcia McNutt.Officials hope to deposit sediment high along the walls of the Grand Canyon, away from the river’s reach at lower water levels. Before Glen Canyon Dam’s completion in 1966, the Colorado Riversupplied more than 90 percent of the sediment forming the canyon’s beaches and sandbars, popular stops for tourists and river rafters.Currently, sand and mud piles up behind the dam and natural beaches and sandbars have disappeared, allowing predatory non-native fish such as rainbow trout to flourish.Vegetation, once buried or ripped away during periodic floods, now grows over riverside camping sites. And the National Park Service believes erosion threatens some archaeological sites.Follow OurAmazingPlanet on Twitter @OAPlanet. We’re also on Facebook and Google+.

Iowa scientists: Drought a sign of climate change More than 130 Iowa scientists issue statement that 2012 drought is a sign of climate change By David Pitt, Associated Press | Associated Press – 13 hours ago DES MOINES, Iowa (AP) — This year’s drought is consistent with predictions that global climate change would bring about weather extremes including more frequent droughts, said a report released Monday.The Iowa Climate Statement updates the 2010 report, reflecting the year’s lingering drought and the belief that it signifies what many scientists have predicted — increasing instability in weather patterns will lead to extremes during both wet and dry years.Iowa has experienced such extremes in recent years; in 2008, flooding caused an estimated $10 billion in damage, making it the worst disaster in the state’s history.More broadly, this year’s drought brought about parched croplands, reducing corn yields across the nation’s Grain Belt, from South Dakota to Indiana. And last month’s Superstorm Sandy — a combination of a hurricane, a wintry storm and a blast of arctic air — devastated parts of the Eastern seaboard and killed more than 100 people.The report was signed by 138 scientists and researchers from 27 Iowa colleges and universities. They said they wanted to release the updated report now while the drought is still fresh in the public’s mind.”The drought is sort of a teachable moment,” said Jerry Schnoor, co-director of the Center for Global and Regional Environmental Research at the University of Iowa.The scientists are careful to avoid saying any single extreme weather incident is directly caused by global warming, saying too many factors are at play when it comes to weather. But, they did say increasingly volatile weather patterns have been predicted by scientists who study global warming.Patrick Michaels, director of the Center for the Study of Science at the Washington-based conservative think tank Cato Institute, said there’s no evidence global warming contributed to this summer’s drought. He doesn’t deny that global warming is real and that man-made pollutants may contribute to it, but says it has a very small impact overall.Michaels said the scientists who signed on to the report are „nibbling around the edges” with their recommendations that Americans use more renewable energy sources, such as wind power and ethanol, and build homes to be more efficient. He says any action the United States takes wouldn’t be that effective because China and India are emitting increasing amounts of pollutants that contribute to global warming.The Iowa scientists said they’re statement is not one of gloom and doom, but meant to indicate investments can be made now to slow the economic impact of weather extremes and to help communities adapt to the changes.One scientist who helped draft the report, Dave Courard-Hauri, chairman of environmental science and policy program at Drake University, said continuing to deny the connection between increased storm volatility and a warming climate helps no one.”We gain nothing if we act as if there’s uncertainty where there’s not or that there is significant division among scientists regarding the causes of climate change,” he said. 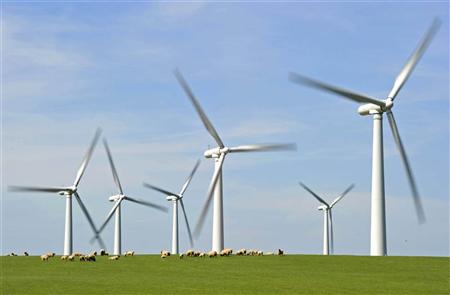 Enlarge Photo Reuters/Reuters – A windfarm is seen on Anglesey, north Wales May 2, 2011. REUTERS/Toby Melville LONDON (Reuters) – Britain will outline the minimum prices that utilities will get for generating electricity from nuclear and renewable sources in June next year, the government said on Tuesday, a move that prolongs uncertainty for investors.Secretary of State for Energy and Climate Change Edward Davey told an influential parliamentary committee that the minimum price new nuclear power stations and windfarms can receive for selling into the grid would be published in June 2013 and would apply until 2017, when prices would be subject to revision.Britain will introduce its long-awaited Electricity Market Reform bill early next week, Davey told the committee.Around 330 billion pounds of investment will be needed in Britain’s energy infrastructure by 2030, according to a report last month from the London School of Economics, and some investors had been hoping minimum prices for particular types of generation would be outlined this month.Minimum prices for particular types of electricity generation „will be based on the evidence of the costs,” Davey said.Analysts say the cost of market entry for new nuclear power plants is around 140 pounds per megawatt-hour (MWh), which is comparable to offshore wind farms.The current price for wholesale electricity is around 47 pounds per MWh.Offshore wind benefits from generous government subsidies, but Britain has ruled out giving subsidies to investors in the nuclear industry.Meanwhile, Davey said the parties in Britain’s ruling coalition had not yet agreed whether a 2030 decarbonisation target would be included in next week’s bill.Another committee that advises the government on climate change earlier this year recommended that Britain adopt a target that would compel electricity to be produced at no more than 50g of CO2/kW by 2030.British media last week reported that ministers in the coalition government were opposed to a threshold because it could mean no new fossil fuel power stations could be built unless they capture and bury carbon.”My personal view is that there are attractions to decarbonisation by 2030. I am not going to prejudge outcome of discussions. But a lot of people in industry think this is a good idea,” Davey said.($1 = 0.6284 British pounds)(Reporting by John McGarrity; editing by James Jukwey)
New Zealand volcano erupts, flights told to avoid By Associated Press – 2 hrs 41 mins ago
WELLINGTON, New Zealand (AP) — A New Zealand volcano has erupted for the second time in less than four months, sending a dark ash plume about 3 kilometers (1.9 miles) into the sky.Authorities issued a no-fly alert above Mount Tongariro on central North Island after it erupted Wednesday afternoon. Scientists say the eruption did not cause any damage or force road closures and that planes could divert around the mountain.Volcanologist Tony Hurst says the eruption was unexpected, although scientists had placed the volcano on a higher alert after it erupted in August for the first time in more than a century.Hurst said the dark ash indicated magma pressure deep underground caused the eruption. A steam-driven eruption typically produces white ash.