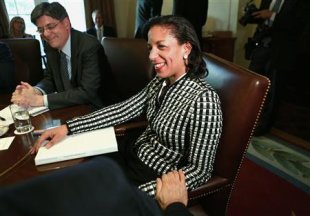 U.S. Ambassador to the United Nations Susan Rice beams after President Barack Obama praises her „extraordinary” …President Barack Obama praised embattled U.S. Ambassador to the U.N. Susan Rice as „extraordinary” on Thursday as she looked on during a Cabinet meeting at the White House.”Susan Rice is extraordinary. Couldn’t be prouder of the job that she’s done,” Obama said in response to a question from a reporter.  The president and the assembled top aides then applauded.But Obama gave no clue as to whether he was any closer to nominating her—or anyone else—to succeed Secretary of State Hillary Clinton. Clinton has said she will be leaving her post after four years as America’s top diplomat, a role in which she has won praise from Democrats and Republicans in Congress.Rice, who is known to be close to Obama, is thought to be a top contender for the job. So is Democratic Sen. John Kerry, who chairs the Senate Foreign Relations Committee. But she has become a lightning rod for Republican criticism of the administration’s handling of the Sept. 11 attack on the American compound in Benghazi, Libya. Several top Republicans, including Sen. John McCain, have vowed to block her confirmation.That assault claimed the lives of Ambassador Chris Stevens and three other Americans. Republicans have accused the administration of misleading the public by playing down intelligence that it was a terrorist attack. They have also charged that the administration ignored requests for increased security in Benghazi and expressions of concern about extremists operating in the eastern Libyan city.