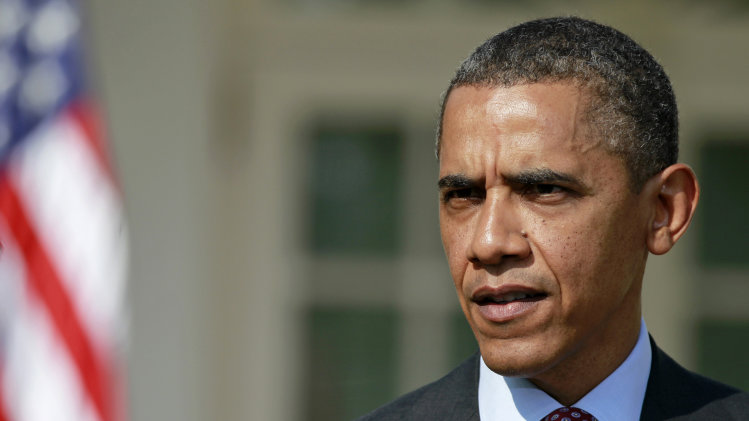 Olivier Knox, Yahoo! News 7 hours ago SocietyBarack ObamaShooting of Trayvon Martin Saying „we are a nation of laws, and a jury has spoken,” President Barack Obama on Sunday urged Americans to stay calm in the wake of George Zimmerman’s acquittal in the Trayvon Martin case and „honor” the slain teen’s memory by preventing similar tragedies in the future. „I know this case has elicited strong passions.  And in the wake of the verdict, I know those passions may be running even higher.  But we are a nation of laws, and a jury has spoken,” Obama said in a written statement released by the White House.[RELATED: Jury finds George Zimmerman not guilty]”I now ask every American to respect the call for calm reflection from two parents who lost their young son,” the president said, calling Martin’s death „a tragedy.””We should ask ourselves if we’re doing all we can to widen the circle of compassion and understanding in our own communities. We should ask ourselves if we’re doing all we can to stem the tide of gun violence that claims too many lives across this country on a daily basis,” Obama said. „We should ask ourselves, as individuals and as a society, how we can prevent future tragedies like this.  As citizens, that’s a job for all of us.  That’s the way to honor Trayvon Martin.”[RELATED: DOJ urged to press civil rights charges]The statement shed little light on whether the Justice Department will press federal civil rights charges against Zimmerman. But the department released a statement shortly after the president’s comments saying that it was actively weighing whether to do so.”Experienced federal prosecutors will determine whether the evidence reveals a prosecutable violation of any of the limited federal criminal civil rights statutes within our jurisdiction, and whether federal prosecution is appropriate in accordance with the Department’s policy governing successive federal prosecution following a state trial,” the Justice Department said.In March 2012, the president had famously urged Americans to come together and do some „soul searching” about Martin’s slaying and underlined that „if I had a son, he’d look like Trayvon.”

Myanmar leader visits Britain, may be challenged on human rights By Andrew Osborn LONDON (Reuters) – President Thein Sein, the first leader of Myanmar to visit Britain in more than a quarter of a century, will hold talks on Monday with Prime Minister David Cameron, who is under pressure to confront him on human rights.Sein is due to talk trade, aid and democracy with Cameron and his ministers during a two-day visit at a time when Myanmar is opening up its oil, gas and telecoms sectors to foreign investors, with further liberalization likely.Sein, a former military commander, is trying to get the West to help Myanmar’s economy recover from decades of military dictatorship, Soviet-style planning and international sanctions.Western leaders have praised him for ending the house arrest of opposition leader Aung San Suu Kyi, releasing some political prisoners, and allowing the opposition to contest an election.But they want him to loosen further the military’s grip on the mineral-rich state formerly known as Burma before a 2015 presidential election which the British-educated Suu Kyi hopes to contest.Suu Kyi, a Nobel laureate, visited Britain last year.Sein is also under pressure to act to protect Myanmar’s small Muslim minority from inter-ethnic violence.”Prime Minister Cameron should not miss an important opportunity to press Burma’s president on justice for crimes against humanity committed against the country’s Muslims, the release of remaining political prisoners, or an end to repressive laws,” said New York-based Human Rights Watch.At least 237 people have been killed in Myanmar in religious violence over the past year and about 150,000 people have been displaced. Most of the victims were Muslim and the deadliest incidents happened in Rakhine State, where about 800,000 Rohingya Muslims live, according to the United Nations.Avaaz, a global campaign group, plans a demonstration outside the British parliament on Monday, saying almost a million people have signed a petition calling for an end to inter-ethnic violence in Myanmar.It said the bloodshed risked escalating to become the next Rwanda – a reference to the bloody inter-ethnic violence there in 1994 in which hundreds of thousands were killed.A spokesman for the British Foreign Office said: „We want to recognize the remarkable reforms of the last 18 months but also to raise at the highest levels our ongoing concerns, particularly about inter-communal and anti-Muslim violence.”Britain will press Sein to improve humanitarian access, to address accountability for crimes, and to end discrimination against the Muslim Rohingya community, he said.Cameron visited Myanmar last year, and Sein, who remains close to the military, this year became the first leader of his country since 1966 to visit the White House.His British trip is thought to be the first since the late General Ne Win, who ruled Burma for 26 years, visited in 1986.Sein is expected to visit France afterwards.(Editing by Alistair Lyon)

Demographic change amplifying racial inequities WASHINGTON (AP) — One-year-old Ka’Lani is so fascinated by a round plastic toy that she doesn’t see her mother, Ke’sha Scrivner, walk into the Martha’s Table day care, chanting her name while softly clapping out a beat that Ka’Lani keeps with a few bounces on her bottom.Once on welfare, Scrivner worked her way off by studying early childhood education and landing a full-time job for the District of Columbia’s education superintendent. She sees education as the path to a better life for her and her five children, pushing them to finish high school and continue with college or a trade school.Whether her children can beat the statistics that show lagging graduation rates for black children is important not just to her family. The success of Ka’Lani and other minority children who will form a new majority is crucial to future U.S. economic competitiveness.A wave of immigration, the aging of non-Hispanic white women beyond child-bearing years and a new baby boom are diminishing the proportion of children who are white. Already, half of U.S. children younger than 1 are Hispanic, black, Asian, Native American or of mixed races.”A lot of people think demographics alone will bring about change and it won’t,” said Gail Christopher, who heads the W.K. Kellogg Foundation’s America Healing project on racial equity. „If attitudes and behaviors don’t change, demographics will just mean we’ll have a majority population that is low-income, improperly educated, disproportionately incarcerated with greater health disparities.”In 2010, 39.4 percent of black children, 34 percent of Hispanic children and 38 percent of American Indian and Alaska Native children lived in poverty, defined as an annual income of $22,113 that year for a family of four. That compares with about 18 percent of white, non-Hispanic children, according to Census Bureau’s 2011 American Community Survey.

Sudan’s Bashir arrives in Nigeria to anger of rights groups ABUJA (Reuters) – Sudanese President Omar al-Bashir arrived in Nigeria on Sunday for an African Union summit on HIV/AIDS as his hosts chose to ignore an International Criminal Court (ICC) arrest warrant against him.Bashir, accused of masterminding genocide and other atrocities during Sudan’s Darfur conflict, which has left some 200,000 people dead, in theory risks arrest if he travels to one of the more than 120 states including Nigeria that have signed up to the ICC.He has been refused trips to Uganda, South Africa, Malawi and Zambia in the past because of his indictment. This is his first trip to West Africa since the warrant was issued.The African Union (AU) voted in 2009 not to cooperate with the ICC indictments, saying they would hamper efforts to end Sudan’s multiple conflicts. Bashir rejects the ICC charges.”The Sudanese president came for an AU event and the AU has taken a position on the ICC arrest order, so Nigeria has not taken action different from the AU stand,” presidential spokesman Reuben Abati said.Human Rights Watch International Justice Program director Elise Keppler said Nigeria had „the shameful distinction of being the first West African country to welcome ICC fugitive Sudanese President Sudan al-Bashir”.”Al-Bashir is sought on the gravest crimes … and Nigeria’s hosting is an affront to victims – he belongs in custody,” she said.The main African Union summit this month had to be moved to Ethiopia, which has not signed the ICC statute, after Malawi, heavily dependent on Western aid, refused to host Bashir.Though initially welcomed by African leaders, the ICC has been accused of exclusively targeting African war criminals and failing to indict anyone from other continents, a charge the ICC and its backers says is unfair.(Reporting by Tim Cocks, Camillus Eboh and Felix Obuah; Editing by Kevin Liffey)