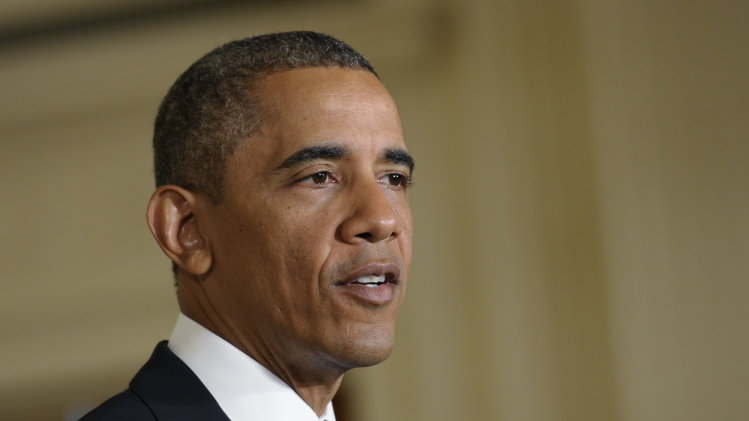 JOSH LEDERMAN 3 hours ago PoliticsNatureBarack ObamaChinaClimate changeGlobal warmingGreenhouse gas WASHINGTON (AP) — President Barack Obama has stumbled on an unusual partner in his quest to combat climate change: China.The world’s two biggest emitters of heat-trapping greenhouse gases are finding common cause in efforts to reduce global warming, cooperation the U.S. says could clear the way for other developing nations like India and Brazil to get on board, too.Skeptics question whether either nation will follow through on lofty aspirations. Still, the budding agreements are allowing the two rivals to present a positive front at a time when tensions are running high over espionage, alleged cybertheft and American fugitive Edward Snowden.Last week, top American and Chinese officials announced new joint initiatives, including cutting emissions from heavy-duty vehicles and upping energy efficiency of buildings, transport and industry. They also agreed to team up on large-scale experiments with „carbon capture” — technology to isolate carbon dioxide from power plant emissions so it can be safely stored. Lack of commercially viable technology has been a major barrier to making plants cleaner in the U.S. and abroad.A month earlier, Obama and Chinese President Xi Jinping (shee jihn-peeng) met in the California desert for a summit aimed at forging closer ties. The sole concrete achievement was a deal to phase out hydrofluorocarbons, a potent greenhouse gas used in refrigerators and air conditioners.”This is a priority for the president and for me,” Vice President Joe Biden said Thursday during a speech on Asian relations, specifically mentioning the accord with China. „The impact of climate change also has an impact as growth as well as security.”The world’s most populous country, China has long been perceived globally as an unabashed polluter but has started to change its tone. In 2007 China’s notoriously pragmatic and economy-focused government called, in a national strategic document, for an „ecological civilization,” reflecting a move toward balancing environmental protection with development.China’s environmental imperatives are clear: suffocating smog in Beijing, rising sea levels and polluted water and soil that can stifle development. Already vying with the U.S. as the world’s largest manufacturer, China looks at policies that constrain industry growth differently than other, largely agricultural developing nations in Africa or Asia.Beijing may also see renewable and clean energy as a growing global fad and want to ensure they’re not left out. In 2010, China’s government spent more than $30 billion subsidizing its solar panel industry, U.S. energy officials said. And the U.S. shale natural gas boom is attracting major Chinese investment, too.The Chinese Embassy in Washington didn’t respond to a request for comment.For Obama, jumpstarting the global climate change effort is a key to his second-term agenda and his legacy. Reducing U.S. greenhouse gases will only go so far. Mounting emissions planetwide could blunt the impact of what Obama does at home.That’s where China could play a critical role..”View gallery 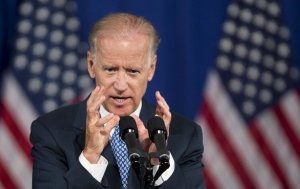 Vice President Joe Biden, speaks about the U.S. policy toward the Asia-Pacific region at an event ho …”China is a huge weight in the global system,” said Jonathan Pershing, the Energy Department’s top climate official and a former U.S. climate negotiator, in an interview. „It has a developing country framework, so other developing countries say, ‘Certainly if China can do it, we can do it, too.'”Although China is unlikely to actively nudge other nations, the overriding U.S. concern is that China not spoil global agreements that would otherwise proceed, Pershing said. That’s because climate accords tend to be governed by consensus. Such a phenomenon was on display in 2009, when China was accused of wrecking a stronger agreement in Copenhagen over its resistance to specific emissions limits.The upbeat tone on climate comes as a series of disputes have complicated Obama’s attempts to improve relations with China and strengthen U.S. influence in Asia.Washington has complained loudly to Beijing about cyberhacking and intellectual property. The White House also says bilateral relations were dealt a serious blow by China’s refusal to extradite Snowden, the National Security Agency leaker, before he fled Hong Kong. At the same time, Snowden’s revelations about U.S. surveillance emboldened Chinese officials to argue Obama’s complaints about cybersecurity are hypocritical.And China’s growing investment and influence in sub-Saharan Africa, where it’s surpassed the U.S. as the largest trading partner, were on display last month as Obama traveled the continent.”There are pressures on the U.S. and China to do something about global warming, and it happens to fit in with the idea of expanding cooperation to try to contain and hopefully reverse the growing strategic rivalry,” said a former U.S. Ambassador to China, J. Stapleton Roy.The White House hopes that political pressure from China’s expanding middle class may spur China to further action.It remains to be seen whether the cooperation on climate will extend much beyond diplomatic niceties. After all, the U.S. and China have at times made similar pronouncements, said Elizabeth Economy, director of Asia studies at the Council on Foreign Relations.”There are many, many good ideas that simply don’t come to fruition,” Economy said. „There are reasons why it hasn’t worked very well in the past. As far as I can see, those same reasons exist today.”__AP Business Writer Joe McDonald in Beijing contributed to this report.__Follow Josh Lederman on Twitter: http://twitter.com/joshledermanAP

Syria’s Assad may cling on, Britain will not arm rebels: sources 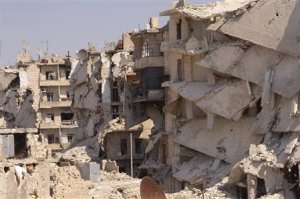 By Andrew Osborn, Paul Taylor and Guy FaulconbridgeLONDON (Reuters) – Britain has abandoned plans to arm Syrian rebels fighting to overthrow President Bashar al-Assad and believes he might survive in office for years, sources familiar with government thinking say.The sources also told Reuters that a peace conference to try to end the conflict – now in its third year – might not happen until next year if at all.”Britain is clearly not going to arm the rebels in any way, shape or form,” said one source, pointing to a parliamentary motion passed last week urging prior consultation of lawmakers.The reasons for the shift were that British public opinion was largely opposed, and there were fears that any weapons Britain supplied could fall into the hands of Islamist militants.”It will train them, give them tactical advice and intelligence, teach them command and control. But public opinion, like it or not, is against intervention.”The British position amounted to one of the gloomiest assessments of the rebels’ prospects yet. It was Prime Minister David Cameron who led the charge earlier this year for the European Union to drop an arms embargo on Syria, which London and Paris had argued was one-sidedly penalizing the anti-Assad opposition..”View gallery 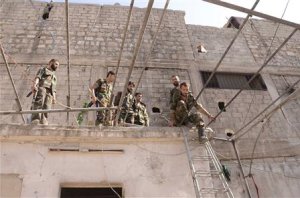 A Syrian army soldier loyal to Syria’s President Bashar Al-Assad prepares to climb down a ladder in  …The involvement of Iran and Hezbollah had shifted the balance of power on the battlefield in Assad’s favor, the sources said, giving him less incentive to negotiate, and the West had no strategy to end the conflict soon.”The Western assessment has changed,” said one source. „We thought Assad could only hold on for a few months. We now think he can last a few years.”Hobbled by debt and defense budget cuts at a time when the United States, Britain and NATO allies are withdrawing forces from Afghanistan, the West says it wants to help the rebels topple Assad.But it finds its options limited.Forces loyal to Assad have made gains in recent months, while rebel groups have been plagued by infighting between Islamist militants linked to Al Qaeda and the more moderate Free Syrian Army. The longer the conflict drags on, the greater the influence the West thinks the Islamists will have, the sources said.U.S. efforts to arm the rebels have stalled in Congress. Britain publicly says it is not ruling out arming the opposition but has privately done so, the sources said.Only a dramatic shift in the situation such as „widespread use of chemical weapons” might force a rethink, another source said, refusing to be drawn on whether a collapse in attempts to broker a political solution might also be a tipping point.Britain has said it believes there has so far been only small-scale use of chemical weapons..”View gallery 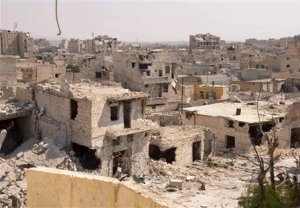 A general view shows damaged buildings in Aleppo July 18, 2013. REUTERS/George OurfalianPolitical realities mean any British decision to arm the rebels would need to be endorsed by a vote in parliament anyway.John Baron, a lawmaker from Cameron’s ruling Conservatives who tabled the motion requiring the government to give parliament such a vote, said he thought a majority of lawmakers opposed sending weapons to the rebels. The government would lose such a vote if one were held today, he said.He said the vote may have been one factor which persuaded the government to back away from arming the opposition.”The foreign secretary has formally said that no options are off the table,” he said. „But what we do know is that Number 10 (the prime minister’s office) has been keen to explore the possibility of arming the rebels.”Any move to arm the rebels would increase the violence and suffering, he said, adding the government had not adequately explained how it would stop arms from falling into the hands of extremists on the rebel side.While Gulf allies like Saudi Arabia might be willing to supply arms to the rebels, and France might quietly channel some weapons, the first source said they were unlikely to provide „game-changing” weapons.”If you give arms to General (Salim) Idriss, how sure can you be that they won’t end up in the wrong hands and be used to shoot down a Western civilian airliner?” the source said.France’s foreign minister said on Thursday Paris had still not decided whether to arm the rebels..”View gallery 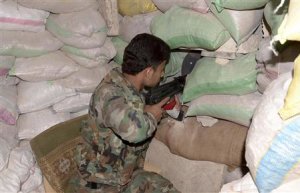 A Syrian army soldier loyal to Syria’s President Bashar Al-Assad points his weapon as he takes up po …”There are certain conditions that need to be met before eventually sending weapons,” Laurent Fabius told reporters. „For now France has not modified its position. We have the ability to do it, but we haven’t delivered any lethal weapons.”The newly-elected president of the Syrian National Coalition Ahmad Jarba is due in Paris for talks over the next week.NO SILVER BULLETThe West’s efforts to end the conflict were being pursued „on different tracks”, added another source.But nothing was happening on any of them.”If there is a silver bullet we don’t know what it is,” the source said. „All the options are horrific.”Sources said Britain was unwilling to publicly disavow the option of arming the rebels because keeping the option open might help persuade Assad to sit down for peace talks.”None of us can foresee exactly how this crisis will develop,” British Foreign Secretary William Hague told lawmakers this week. „We have taken no decision, but we have not ruled anything out.”.”View gallery 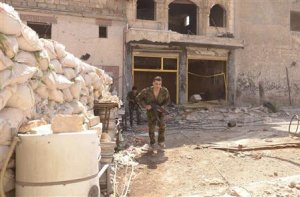 A Syrian army soldier loyal to Syria’s President Bashar Al-Assad runs past sandbags to take cover in …Russia – Assad’s most powerful foreign backer – and the United States want peace talks in Geneva to try to agree a ceasefire and the makeup of a transitional government. The sources said the initiative had stalled and there was a risk such talks would never happen.”We’d hope they would happen this year,” said one. „It’s an aim that’s realistic. But it could be next year. It’s been drifting. We can’t drag it out indefinitely.”Imposing a no-fly zone was a non-starter. „It would need boots on the ground to enforce it and would be horrendously expensive,” the source said.Iran’s decision to pour money and men into Syria to support Assad had made things even harder, another source said, adding there were perhaps as many as 10,000 Lebanese Hezbollah guerrillas and Iranian fighters inside Syria including members of the elite Qods brigade of the Revolutionary Guards.Hezbollah openly boasts of its presence in Syria but Iran denies it has troops on the ground.”Assad cannot score a decisive victory, but he can score tactical victories, as he did in Qusair and as he may do in Homs,” said the first source.”The opposition still controls significant swathes of territory along the borders that he cannot recover, and they can hop over the border and regroup.”(Additional reporting by Mark Hosenball in Washington and John Irish in Paris; Editing by Andrew Roche) 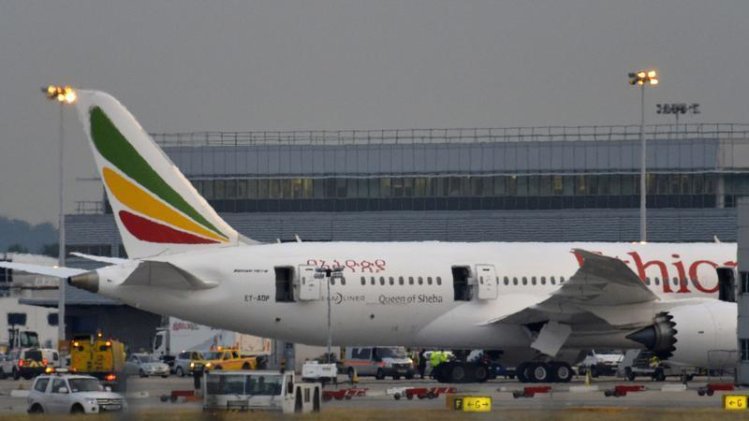