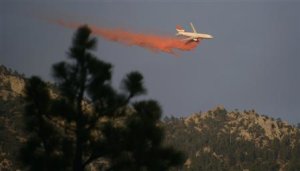 View gallery A DC-10 super air tanker makes a drop on a upper ridge line near Idyllwild, California July 19, 2013. …By Alex Dobuzinskis LOS ANGELES (Reuters) – Cooler weather helped firefighters make significant gains on Saturday against a massive wildfire in Southern California, as crews cut containment lines around nearly 50 percent of the blaze.The so-called Mountain Fire has burned across more than 27,000 acres of dry brush and timber and destroyed seven residences since it broke out on Monday. At least 5,600 residents remain under evacuation orders.The more than 3,000 firefighters tackling the blaze on Saturday managed to expand containment lines to encircle 49 percent of the fire, up from 25 percent earlier in the day, said Carol Jandrall, fire information officer for the multiagency team battling the conflagration.”It’s been probably the best day so far,” she said of the progress made on Saturday..”View gallery 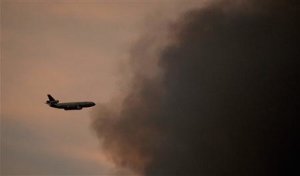 A DC-10 super air tanker flies next to the thick smoke near Idyllwild, California July 19, 2013. REU …Higher humidity and clouds, which reduced sunlight on the burn area and tempered the intensity of the flames, helped firefighters cut more containment lines along the east and south flanks of the fire where it originated, Jandrall said.Firefighters had hoped for rain, but little precipitation actually fell, she said. At the same time, the erratic winds that can propel a fire and had been feared as the weather changed also did not materialize, Jandrall said.The flames have forced the evacuation of the town of Idyllwild, a community about a mile above sea level known for its hiking trails, rock climbing, and arts and music scene, and also forced out residents from the nearby community of Fern Valley.Residents of Idyllwild and Fern Valley have been out of their homes since evacuations were ordered on Wednesday.A few hundred people have been allowed to return home in neighboring areas where the threat of flames has decreased, said Norma Bailey, a spokeswoman for the team combating the blaze.The Mountain Fire is 90 miles east of Los Angeles.Conditions could improve on Sunday, Jandrall said.”They are expecting a chance for more precipitation which would be great,” she said.(Reporting by Alex Dobuzinskis; Editing by Dan Whitcomb, David Brunnstrom and Eric Beech) Strong, shallow earthquake hits western China

CHRISTOPHER BODEEN 2 hours ago Nature BEIJING (AP) — A strong, shallow earthquake struck a moderately populated part of western China on Monday morning. No information on damage was immediately available.The quake hit near the city of Dingxi in Gansu province, a largely desert and pastureland region with a population of 26 million. That makes it one of China’s more lightly populated provinces, although the area around Dingxi has a greater concentration of farms and towns.The government’s earthquake monitoring center said the magnitude was 6.6, which can cause severe damage, and it detected aftershocks ranging up to magnitude 3.9.It said the initial quake at 7:45 a.m. (2345 GMT Sunday) hit at a depth of 20 kilometers (12.4 miles) beneath the surface, although the Gansu provincial earthquake administration said the quake was at an even shallow depth of just 6 kilometers (3.7 miles).Quakes near the surface tend to be more destructive.The U.S. Geological Survey measured the magnitude as 5.9 and the depth at 10 kilometers (6 miles).Initial measurements of a quake can vary widely, especially if different monitoring equipment is used.Local disaster response officials said they were still in the process of gathering information and had no figures for damage or injuries. The officials declined to give their names as is common with Chinese bureaucrats.Dingxi is about 1,233 kilometers (766 miles) west of Beijing.China’s worst earthquake in recent years was an 8.9 magnitude temblor that struck the southwestern province of Sichuan in 2008, leaving 90,000 people dead or missing.   How They Blow: Secrets of Yellowstone’s Geysers By By Becky Oskin, Staff Writer | LiveScience.com – Sat, Jul 20, 2013 10:11 AM EDT 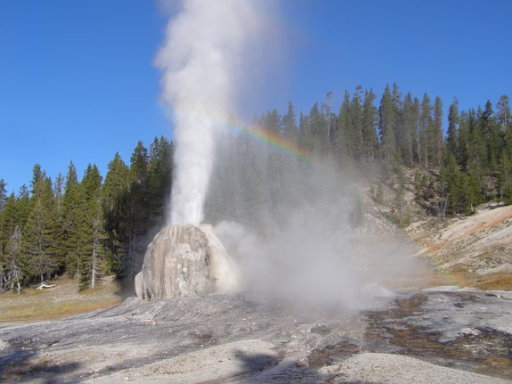 Despite more than a century of scrutiny, the inner workings of Old Faithful and other Yellowstone National Park geysers remain a mystery.Scientists still hash over the basics, such as how water and steam pressurizes underground before a geyser erupts. Now, a high-tech look at Lone Star Geyser, one of the park’s most punctual bubblers, could finally solve some of these long-standing puzzles. The research may also help scientists better understand and predict volcanic eruptions. „The signals we record in geysers may put better constraints on the sources that generate those signals in volcanoes,” said Shaul Hurwitz, a co-author of the study and a research hydrologist with the U.S. Geological Survey in Menlo Park, Calif.Mini volcanoes-Geysers are like miniature volcanoes, with tiny tremors that warn of coming blasts and deathly hot fluids fountaining in the air. The big differences between the two are the plumbing — water versus lava — and the punctuality. But the predictability of geysers makes them an ideal test bed for figuring out how eruptions work.In 2010, Hurwitz corralled a baker’s dozen of geoscientists from around the world for a weeklong experiment at Lone Star Geyser. They measured water discharge, ground motions, seismic waves and sound waves, and recorded high-speed visible and infrared video. Lone Star Geyser erupts every three hours. [Video: A Scenic Tour of Yellowstone National Park]The results help explain the processes controlling a geyser’s graceful jets of water and steam, as well as what’s happening underground before, during and after an eruption, the researchers said. The findings were published June 19 in the Journal of Geophysical Research: Solid Earth.Four phases– The experiment revealed Lone Star’s eruption has four distinct phases, each with a unique geophysical signal, Hurwitz said. As pressure builds up underground, a „preplay” phase, with pulses of steam and water, signals the coming outburst. Then, the eruption starts, with water and steam fountaining at 36 to 63 mph (58 to 101 km/h). The researchers tracked particles in the jetting water with the high-speed cameras to calculate the speed. A quiet post-eruption phase follows, finishing with a recharge phase while the geyser cone refillsAbout half of the world’s 1,000 known geysers are in Yellowstone, which is an enormous volcanic field that has seen at least three giant, caldera-forming eruptions in the past. Geysers like Old Faithful and Lone Star are usually found near recently active volcanoes, where magma can heat subsurface water. They form when choke points prevent water and steam from rising underground, trapping bubbles that eventually explode into a fountaining geyser eruption.What’s underground– The total heat output of Lone Star Geyser was found to be about 1.4 megawatts, which is enough energy to power 1,000 homes for one hour. But the heat amounts to less than 0.1 percent of the total heat output from the whole Yellowstone caldera, Hurwitz said. This suggests that most of the heat trying to escape to the surface (from magma deep in the crust) radiates out through geothermal features that release steam, such as in the eastern part of the park.”Steam can transport a lot of heat,” Hurwitz said. „Even if you took all the geysers in Yellowstone, the total heat output is relatively negligible.”Hurwitz and his co-authors are now preparing another journal article on the shape of Lone Star Geyser’s underground plumbing, he said.Studies published recently on geysers in the Valley of the Geysers on Russia’s Kamchatka Peninsula and Yellowstone’s Old Faithful found many geyser chambers may be egg-shaped instead of long, narrow pipes, as researchers had previously thought.”Geysers are not as simple as one can see by eye,” Hurwitz said.Email Becky Oskin or follow her @beckyoskin. Follow us @OAPlanet, Facebook & Google+. Original article on LiveScience’s OurAmazingPlanet. New Zealand rocked by 6.9-magnitude earthquake 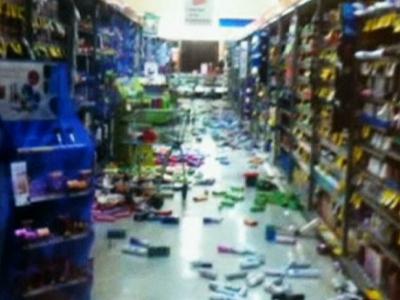 An earthquake of magnitude 6.9 struck New Zealand at around 1:20 ET on Sunday, the U.S. Geological Survey’s monitoring service reported.Water mains were broken, windows were smashed and power lines fell in Wellington, the capital city.This is the second time in three days powerful quakes have shaken the country.The epicentre of the quake was between the north and south islands in the Cook Strait, 57 kilometres southwest off the coast of Wellington, and 10 kilometres under the water.There were no immediate reports of injuries after the tremors. And, there were no tsunami warnings issued.Aftershocks continue to rattle the area