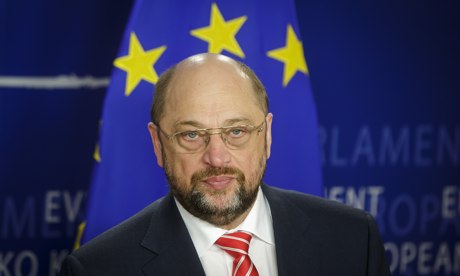 Martin Schulz, European parliament president: ‘Free movement … is a fundamental principle and it’s not up for negotiation.’ Photograph: Thomas Trutschel/Getty

Brussels has stepped up its fightback against UK attempts to curb EU immigration as leaders of the European parliament declared that rules on freedom of movement were completely non-negotiable, and made clear that attempts to change them would be blocked.

In the latest response to calls from UK politicians to unpick the EU treaties and rewrite one of its founding principles, the European parliament’s president, Martin Schulz, said that while he took UK demands for reform of the EU „very seriously” there was no question of the parliament agreeing to reopen the rule-book on free movement.

Schulz, a German Social Democrat, said he would like to see David Cameron‘s plans for EU reform, and wanted the UK to remain inside the EU to shape policy on everything from climate change to the single market and development policy. But he added: „Where we differ is that I would rather see the UK making its case for reform from within the EU rather than with one hand on the escape hatch.

He stressed that such treaty change „needs unanimous support and ratification of all member states”.

It would also need to pass through the European parliament, where it would almost certainly be blocked.

It came as the Sunday Telegraph said 95 Tory MPs had written to the prime minister demanding parliament must be given the power to veto every aspect of EU law. Backbenchers led by Bernard Jenkin want the government to reverse the spread of human rights law, relieve businesses of red tape from Brussels and regain control over immigration.

And in an interview with the Sunday Times, the work and pensions secretary, Iain Duncan Smith, said EU immigrants should wait for up to two years before being able to claim benefits rather than the current period of three months. He said he had been speaking to other member states such as Germany, Italy and the Netherlands who were supportive of the idea.

One of the parliament’s vice-presidents, the Liberal Democrat MEP Edward McMillan-Scott, told the Observer changing the principles of freedom of movement would never pass through the Council of Ministers nor the parliament. „In a globalising world, for the EU to revisit its own fundamental principles of open markets and open frontiers would amount to self-harm. I do not think that the European parliament now or in the future would accept such a major upheaval.”

The remarks reflect an increasing determination within the EU to respond robustly to the UK’s demands for a new deal on immigration, and a growing sense that British politicians must not be allowed to hold the rest of the union to ransom over the issue by bringing up the possibility of a UK exit. While other EU leaders, including German chancellor, Angela Merkel, are keen to help Cameron devise a new deal that he can sell back home, Berlin insists she will not want to tamper with EU founding principles.

With Cameron wanting to reopen the debate on free movement, and home secretary Theresa May floating the idea of capping the annual number of entrants to the UK at 75,000, Schulz’s comments make it clear that a renegotiation on that scale may be all but impossible.

Alarmingly for Cameron, several of those now jockeying to be the next president of the European commission later this year are among the strongest believers in holding the line against a special deal for the UK. Last week one of those in the frame to take over from José Manuel Barroso, Viviane Reding, who is a current vice-president, tore into Cameron for failing to counter a „myth” that immigration from the EU was harming the UK economy.

She urged politicians in the UK to explain calmly what the EU is about, rather than give in to populists on the right.

Others in the running for the presidency include former Luxembourg prime minister Jean-Claude Juncker and former Belgian PM Guy Verhofstadt.

Cameron, under pressure from Ukip and Tory Eurosceptics, has promised that if the Tories win the next election he will hold a referendum by the end of 2017 after having renegotiated the terms of UK membership, including rules on freedom of movement. Already the government has announced tougher rules for EU citizens claiming benefits in this country.

Michael Ashcroft, former deputy chairman of the Conservatives, said a Ukip victory in the Wythenshawe and Sale East byelection, for the vacant seat following the death of Labour MP Paul Goggins, would be „a game changer”. Bookies have slashed Ukip’s odds from 12/1 to 4/1 as Labour remains odds-on to retain the seat having won with a majority of 7,575 in 2010.

A poll by the thinktank British Future finds strong public support for a change in the UK’s relationship with the EU. More than one in four (28%) of UK voters want to leave, while 38% wish to stay in and try to reduce EU powers. Even senior Labour figures are now talking of the need to change freedom of movement rules in terms that will cause further alarm in Brussels.

Last week shadow business secretary Chuka Umunna said he had been discussing with European counterparts how to limit immigration from EU countries to people with good skills and firm job offers. „The founders of the EU had in mind free movement of workers, not free movement of jobs,” he said.

Labour sources later said he had „made a mistake” but party strategists are aware that in the current anti-EU climate they have to be responsive to prevailing scepticism.