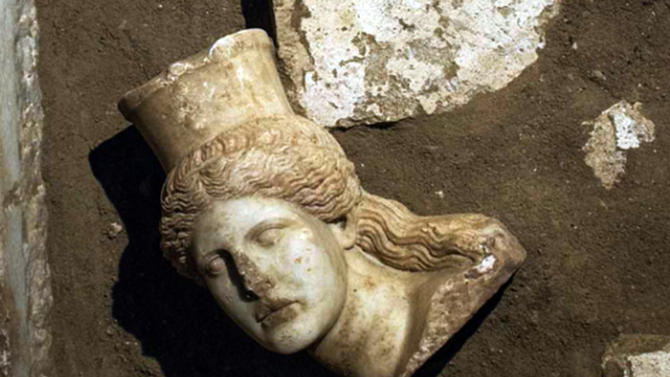 Thessaloniki (Greece) (AFP) – The head of a near-intact marble sphinx has been discovered in the largest tomb ever unearthed in Amphipolis, northern Greece, the culture ministry announced.Discovered in the fourth chamber of a burial mound at the site in the northern region of Macedonia, the sphinx is more than half-a-metre (18 inches) high and was marked by „traces of red”, according to a statement from the ministry.Archaeologists also found fragments of the sphinx’s wings within the same burial mound.”The sphinx’s head belongs to the body of a sphinx which was found previously,” said the statement released Tuesday.It was the latest find by archaeologists who unearthed the enormous tomb dating back to fourth century BC and the time of Alexander the Great of Macedonia in early August.Previously they have discovered the mosaic of a man driving a chariot, carved caryatids — columns of female figures that serve as architectural support — and a large mosaic depicting the abduction of Persephone by Pluto.Since discovery of the site, deemed to be of huge historical importance and visited by Greek Prime Minister Antonis Samaras, there has been widespread speculation over who was buried there: from Roxana, Alexander’s Persian wife, to Olympias, the king’s mother, to one of his generals.However, despite high hopes among some historians, it is highly unlikely that the tomb is that of Alexander the Great.
Japan prosecutors set to rule on possible Fukushima indictments 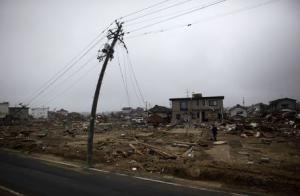 A man walks near a damaged power pole at an area that was devastated by the March 11 earthquake and tsunami, …TOKYO (Reuters) – Japanese prosecutors must decide this week whether to charge Tokyo Electric Power Co executives for their handling of the 2011 Fukushima disaster, in a process that could drag the operator of the stricken nuclear plant into criminal court.Related Stories

The judicial review is unlikely to see Tepco executives go to jail, legal experts say, but rehashing details of the meltdowns and explosions that followed an earthquake and tsunami will cast a harsh light on the struggling utility and will not help Prime Minister Shinzo Abe’s unpopular effort to restart Japan’s nuclear reactors.The Tokyo’s District Prosecutors Office last year declined to charge more than 30 Tepco and government officials after investigating a criminal complaint from residents, who said officials ignored the risks to the Fukushima Daiichi plant from natural disasters and failed to respond appropriately when crisis struck.But a special citizens’ panel opened another legal front in July, asking prosecutors to consider charges of criminal negligence against three executives over their handling of the world’s worst nuclear disaster since Chernobyl in 1986.Under the review system, the prosecutors must respond by Thursday.If they again decline to take up the case, as some experts expect, the 11-member panel of unidentified citizens can order prosecutors to indict, if eight members vote in favor.Prosecutorial Review Commissions, made up of citizen appointees, are a rarely used but high-profile feature of Japan’s legal system introduced after World War Two to curb bureaucratic over-reach. In 2009, they were given the power to force prosecutions.A panel in 2011 forced the prosecution of former opposition leader Ichiro Ozawa over political funding. He was acquitted in 2012 and remains an opposition figure.Tepco already faces a string of civil suits, a decades-long, multibillion dollar decommissioning Fukushima Daiichi and a struggle to restart a separate undamaged power station, the world’s biggest.NOT LIKELY All 48 of Japan’s reactors have been idle for more than a year under a safety regime that incorporated the lessons of Fukushima, where 160,000 people were forced to flee from a huge plume of radioactive material that left large areas uninhabitable for decades.Backed by Abe’s pro-nuclear government, Kyushu Electric Power Co recently won approval from safety regulators to restart a plant in southwest Japan but faces opposition from some neighboring communities.Nationwide, a majority of people has consistently opposed restarting nuclear power, according to opinion polls since the disaster.The citizens’ panel said Tsunehisa Katsumata, Tepco chairman at the time of the disaster, and former executive vice presidents Sakae Muto and Ichiro Takekuro failed to take protect the Fukushima plant despite warnings it faced big tsunamis.The prosecutors are unlikely to change their minds, said Shin Ushijima, an attorney and former public prosecutor.”Prosecutors exhaust all means in their investigations and certainly would have in a special case like this, so if they were convinced they could not prosecute Katsumata and the others earlier, they will not reach a decision to indict now,” he said.”There is a 50 percent chance that some or all of the three ex-Tepco executives will be indicted and 99.9 percent chance those indicted will be found not guilty,” Ushijima said.”How can you prove one person, Katsumata for example, is liable or guilty, when such a big organization was behind such a large accident?”Tepco faces huge compensation claims and has set aside just a fraction of the funds needed to decommission the Fukushima plant.A court recently ordered the utility to pay compensation to the family of a woman who killed herself after being forced from her home because of the disaster. A group of Fukushima workers is also suing the company for unpaid wages.(Reporting by James Topham and Aaron Sheldrick; Writing by Aaron Sheldrick; Editing by Robert Birsel) 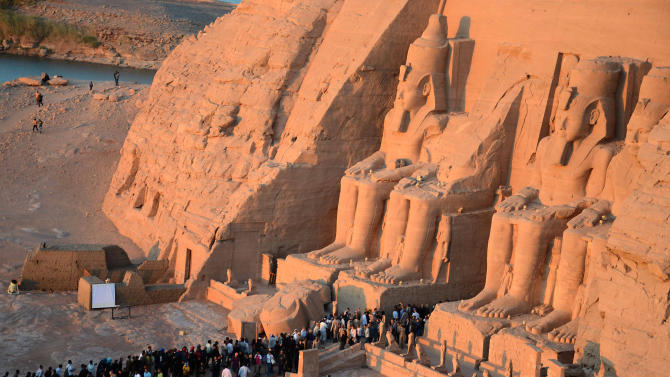 ABU SIMBEL, Egypt (AP) — Hundreds of visitors have gathered at the Great Temple of Ramses II in Egypt to watch the sun illuminate colossal statues, a rare 3,200-year-old astronomical ceremony that happens twice a year.At dawn at Abu Simbel, local dignitaries and tourists on Wednesday waited for the sun to send a beam of light into the ancient temple’s dark inner chamber for over 10 minutes, lighting three of four enormous, 22-meter (72-feet) -high statues.Thirty-two centuries ago, the temple was precisely built to align with the sun twice a year, celebrating the pharaoh’s birthday and coronation. It is considered one of the most beautiful of Egypt’s ancient monuments, well-known for its four colossal statues.Egyptian authorities are working hard to revive the tourism industry, collapsed in the wake of the 2011 uprising.

U.S. Greenhouse Emissions on the Rise Despite Obama Administration’s Plans By Eric Zerkel Published: Oct 22, 2014, 4:19 PM EDT weather.com Combating Carbon Emissions U.S. power plants released more greenhouse gases in 2013 than 2012 despite recent efforts by the Obama administration to drastically cut such pollution by 2030, a new report from the U.S. Energy Information Administration (EIA) shows, and the brutal winter of 2013 shoulders a large part of the blame.The EIA reports that from 2012 to 2013 carbon dioxide emissions from energy-related sources rose by 2.5 percent, the fourth largest increase in such emissions since 1990. This marks the first time energy-related carbon dioxide emissions rose year-to-year since 2010, which was the single largest jump in emissions (3.7 percent) since 1990.So then, why the increase? One massive factor was winter 2013, which as the EIA notes, resulted in a more than 18 percent increase in what are known as heating degree days, or days where more energy is required to heat your home.That jump in heating degree days is pretty representative of the brutal cold a large portion of the U.S., in particular the Midwest, braved from December to February. Winter 2013/2014 was the one of thetop 10 coldest winters on record for residents of seven Midwestern states.When it’s freezing out (quite literally) people crank up the heat to stay warm. And that takes electricity, a lot of it. Power plant emissions tied to residential energy consumption rose dramatically in 2013, contributing to 48 percent of the total increase in emissions from 2012 to 2013.Now a bit of simple economics kicks in. Both coal-fired power plants and natural gas power plants, two competing sources of greenhouse emissions, experienced price changes in 2013. The price to deliver natural gas to electric generators at power plants increased at the same time the price of coal decreased. When price goes up, demand goes down. Similarly, when price goes down, demand goes up. So, naturally, energy production shifted to the cheaper energy source, in this case coal-fired power plants.As a result, coal-fired power plants generated 4 percent more electricity from 2012 to 2013, while natural gas’s electricity generation contribution dropped by some 10 percent. Even so, because of increases in solar, wind and nuclear energy, the carbon footprint of electricity generators rose less than 1 percent.Still, the overall increase in carbon emissions is  pretty terrible news for the Obama administration, which just this June, unveiled a plan to cut greenhouse emissions from the U.S.’s power plants by 30 percent by 2030. The first step in the plan called for a 17 percent cut in carbon emissions by 2020, but the EIA’s findings are an obvious setback to accomplishing that.For a look at all of the factors that contributed to the increase in carbon emissions, access the Energy Information Administration’s full report by clicking here.MORE ON WEATHER.COM: Alaska’s Glaciers in Retreat Muir Glacier and Inlet (1895)

In the photo above, the west shoreline of Muir Inlet in Alaska’s Glacier Bay National Park & Preserve is shown as it appeared in 1895. Notice the lack of vegetation on the slopes of the mountains, and the glacier that stands more than 300 feet high. See the glacier as it looked in 2005 on the next page. (USGS/Bruce Molnia)