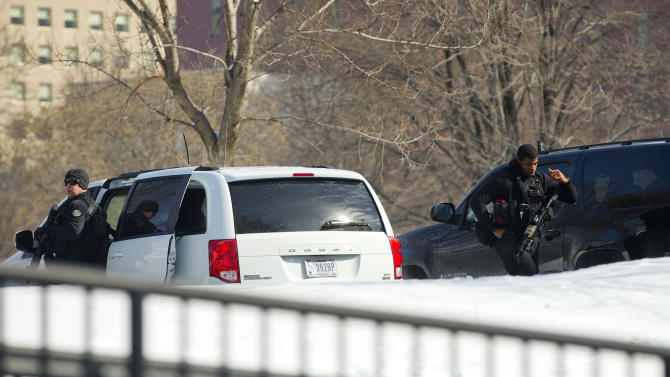 View photoMembers of the U.S. Secret Service’s Counter Assault Team are visible near their vehicles on the North Lawn of the White House, Saturday, March 7, 2015, in Washington. President Barack Obama and the first family were to travel Saturday to Selma, Ala., for the 50th anniversary of „Bloody Sunday,” a landmark event of the civil rights movement. (AP Photo/Pablo Martinez Monsivais)WASHINGTON (Reuters) – The White House was put on lockdown on Saturday after a loud noise was heard on the South Lawn moments before President Barack Obama and his family were due to take off by helicopter, a White House pool report said on Saturday.It said the noise prompted Secret Service agents to move the press back into the briefing room, lock the doors and put the building on lockdown.Obama and his family were not yet on the South Lawn when the noise was heard.”Lockdown continues, although it doesn’t appear as though there’s a high level of consternation among Secret Service walking outside,” the pool report added later.No further details were immediately available.Obama and his family were about to depart by helicopter to Andrews Air Force Base to board Air Force One and travel to Selma, Alabama, to commemorate the 50th anniversary of a civil rights march.(Writing by Sandra Maler; Editing by Andrew Roche) 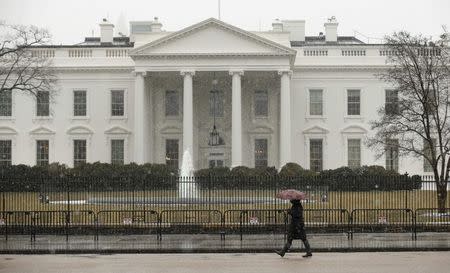 Reuters/Reuters – Snow starts to fall as a woman walks past the White House in Washington March 5, 2015. REUTERS/Kevin Lamarque WASHINGTON (Reuters) – A White House lockdown triggered by a loud bang just moments before President Barack Obama and his family were due to take off by helicopter from the South Lawn has been lifted, media reports said on Saturday.The reports quoted a Secret Service spokesman as saying a food vendor cart had caught fire nearby.The New York Times said that at around the same time as the fire, a bomb-sniffing dog had detected something on a nearby vehicle, although the two incidents did not appear related. The vehicle was being checked.A tweet by WTOP local radio quoted the Secret Service as saying the fire on a nearby street corner was not considered a serious threat and that the security situation was now contained.White House pool reports earlier said a loud bang had prompted Secret Service agents to move the waiting press back into the briefing room, lock the doors and put the building on lockdown.Obama and his family were not yet on the South Lawn when the noise was heard.They had been about to depart by helicopter to Andrews Air Force Base to board Air Force One and travel to Selma, Alabama, to commemorate the 50th anniversary of a civil rights march.The pool reports said the president and his family later departed by motorcade instead of helicopter to Andrews Air Force Base.(Writing by Sandra Maler; Editing by Gareth Jones) 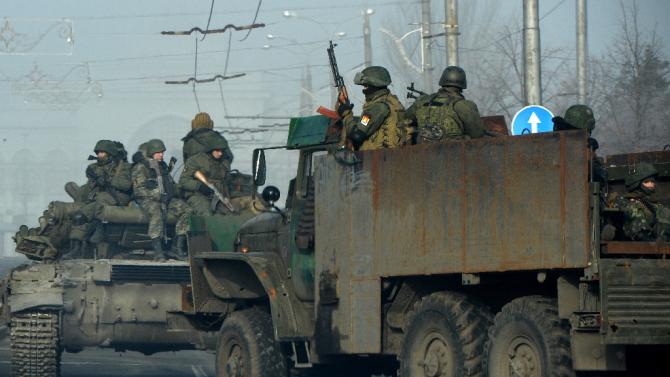 Snizhne (Ukraine) (AFP) – Pro-Russian rebels in eastern Ukraine claimed Saturday to have completed their end of a February deal with government forces to withdraw heavy weapons from the frontline as part of a truce.Related Stories

„Today is the last day of the weapons withdrawal,” Eduard Basurin, one of the rebel leaders told reporters in the town of Snizhne, where the separatists presented eight 120mm mortars that had been moved back from their positions.Watched by six international monitors, the separatists towed the arms to a disused brick factory serving as an arms depot, about 90 kilometres (55 miles) from the rebel hub of Donetsk.Basurin said the separatists were withdrawing a total of 26 mortars. „They will be stored with the rest of the military hardware,” he said.An AFP journalist saw four other artillery pieces inside the Snizhne depot.Under the terms of the European-brokered truce signed in the Belarussian capital Minsk on February 12, both sides to Ukraine’s fratricidal 11-month conflict must move their artillery back far enough to create a buffer zone of between 50 and 140 kilometres, depending on the weapons’ range. 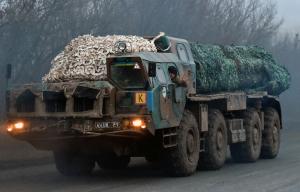 A Ukrainian soldier waves as troops with Smerch multiple launch rocket systems drive on a road not f …Alexander Zakharchenko, the head of the self-proclaimed Donetsk People’s Republic, accused Ukraine’s government of failing to live up to its side of the agreement.”We have fully removed heavy weapons from the line of contact. Ukraine has not yet done it,” he told the separatist news agency DAN.Zakharchenko threatened to return the arms to their positions if Kiev did not match the deescalation.- No dead or injured -Army spokesman Anatoliy Stelmakh told AFP that Kiev was continuing to withdraw its 220mm Uragan rocket launchers from the conflict zone, having already moved back its smaller Grad missile launchers. 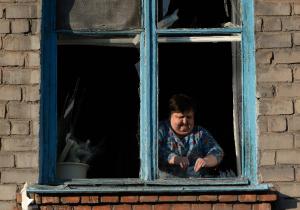 The conflict has claimed more than 6,000 lives since the separatists took up arms against Kiev last  …”The process is ongoing,” he said.Questioned about the rebels’ claim to be first to the finish line, another military spokesman said Kiev had „no information”.”The international observers have not yet confirmed that to us,” Andriy Lysenko said.The Organization for Security and Co-operation in Europe, which is monitoring the truce and weapons withdrawal, has recorded movements on both sides over the past two weeks but said that without full access to the rivals’ inventories it cannot confirm how many arms remain on the battlefield.Speaking in the Latvian capital Riga where he was attending an EU foreign ministers meeting, OSCE Secretary General Lamberto Zannier told AFP there were still areas that the monitors „simply can’t reach”.Russia and Germany have called for the OSCE mission to be more than doubled in strength, from its current tally of 452 to 1,000.German Foreign Minister Frank-Walter Steinmeier, who was also in Riga, said he had received assurances from his Russian counterpart Sergei Lavrov that Moscow was committed to ensuring the OSCE had „guaranteed unlimited access”.Each side to the conflict, which has claimed more than 6,000 lives since the separatists took up arms against Kiev last year, has accused the other of continuing sporadic attacks.But in the past two weeks the truce has appeared to be largely holding.Lysenko said Saturday that the government’s positions had been shelled 14 times by the rebels over the past 24 hours near Avdiyivka, north of Donetsk.But he said he had good news to report: „For the first time over the past few months” no Ukrainian soldier was killed or injured by rebel fire.

By Jérôme Cartillier13 hours ago CBSTV Videos Ahead of Selma anniversary, how have voting rights changed? 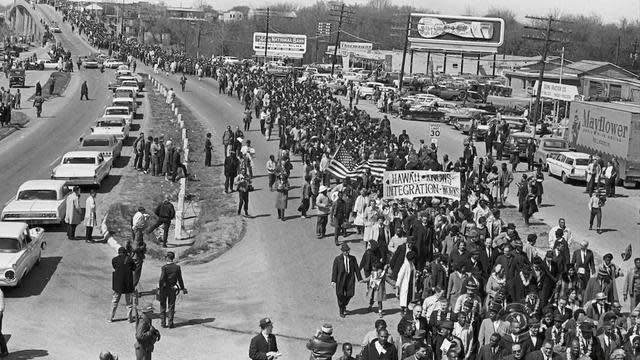 CBS News Ahead of Selma anniversary, how have voting rights changed? Selma (United States) (AFP) – Tracing the footsteps of civil rights leaders who made his journey to the White House possible, President Barack Obama will on Saturday visit Selma, Alabama to enlist a new generation in their fight.Related Stories

America’s first black president will mark the 50th anniversary of the fateful march across the Edmund Pettus Bridge, where brutal state suppression only catalyzed support for black voting rights.Accompanied by wife Michelle and daughters Sasha and Malia, Obama will argue that events in the city half a century ago are not confined to place or time.”Selma is not just about commemorating the past,” Obama said on the eve of the visit.”It’s about honoring the legends who helped change this country through your actions today, in the here and now.”On March 7, 1965, some 600 peaceful activists were attacked by police with clubs and tear gas at the bridge, a seminal moment in America’s democracy. 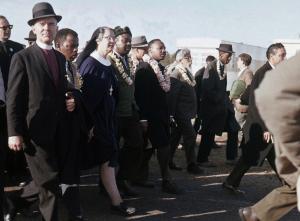 In this March 1965 file photo, Martin Luther King, center, leads a march from Selma to Montgomery, A …A few months later, the Voting Rights Act was passed.Before the act, it was easier for states like Alabama to restrict voter registration through violent intimidation and bureaucratic racism.”Selma is about the courage of ordinary people doing extraordinary things because they believe they can change the country,” Obama said.”Selma is about each of us asking ourselves what we can do to make America better. And historically, it has been young people like you who helped lead that march.”The history of what happened at Selma on „Bloody Sunday” has recently returned to prominence thanks to an Oscar-nominated film starring actor David Oyelowo as Martin Luther King. 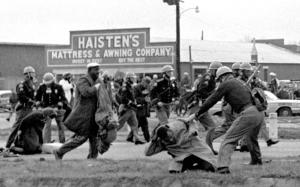 In this March 7, 1965 file photo, state troopers use clubs against participants of a civil rights vo …But Saturday’s address also comes as today’s rights leaders wrestle with scandals over police treatment of black Americans.A probe by Obama’s Justice Department unearthed deep police racism in Ferguson, Missouri, where a white policeman shot dead an unarmed black teenager on August 9, sparking civil unrest and a national outcry.”I don’t think that what happens in Ferguson is typical,” Obama said Friday, but „it’s not just a one-time thing.”Despite what Attorney General Eric Holder called a „searing report” into Ferguson’s police department, the government will not prosecute the white policeman responsible for killing teenager Michael Brown.Obama said he stood by the Justice Department decision.”We may never know exactly what happened, but Officer (Darren) Wilson, like anybody else who is charged with a crime, benefits from due process and a reasonable doubt standard,” said Obama.”And if there is uncertainty about what happened, then you can’t just charge him anyway just because what happened was tragic.”