You are receiving this email because you opted to receive Breaking News Alerts from the Los Angeles Times.

You can also unsubscribe by modifying your profile on latimes.com at http://www.latimes.com/newsletters

Two months ago, Los Angeles City Councilman Bernard C. Parks pitched “SOLA” as a hip-sounding nickname for South Los Angeles. He said other communities had been reinvigorated with “contemporary names.”

But there was just un problema: In Spanish, “sola” means a woman who is alone. Or lonely. A woman wearing a “hip” SOLA shirt might actually appear to be looking for love.

Can South L.A. re-brand again? How does ‘SOLA’ sound?

At meetings at Los Angeles City Hall this week, some residents of South L.A. said the SOLA proposal was a sign that Latinos — who are now the majority in once predominantly black neighborhoods — were overlooked.

Parks said he hoped to usher South L.A. into a new era where abbreviated neighborhood names exude a cool factor. Downtown Los Angeles, which went from a tired stretch of blight to a booming district filled with art galleries, trendy restaurants and pricey lofts, became DTLA. 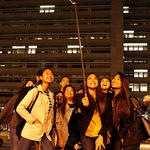 As he prepares to step away from the dais at the end of his term, Parks said, politics are getting in the way of approving one of his final measures. Any word, he contends, can get lost in translation.

“If you really search hard, almost any word that you have in English and you translate it into another language could have another meaning,” Parks said. “I think we’re still in America and we’re speaking English. So that’s what we tried to come up with.”

Street corner torched in L.A. riots may get new life, at long last

But Jaime Regalado, a professor emeritus of political science at Cal State L.A., said the SOLA issue shows how important it is for leaders to stay connected with the demographic shifts occurring in their districts.

“It sounds like Parks was flying solo on this,” Regalado said. Sola, in Spanish, could suggest “a woman in sexual need. It’s not a proper word to use to describe any section or community of Los Angeles. It really is not wise at all, and it means vetting really has not taken place at the community at large.”

ADD A COMMENTSEE ALL COMMENTS

Other city officials wondered how much support there was in the community for Parks’ proposal. Councilman Curren Price, who represents the 9th District, said he received calls and emails from residents who feared that the City Council was slapping a new label on the community without their input. Price moved to table the measure until more outreach could be conducted.

“It has some negative connotations,” Price said. “It’s not the powerful acronym that everybody readily embraces.”

In 2003, residents said the Southside, lumped together then as South-Central, had developed a reputation in popular culture as an area notorious for crime, gangs and drugs. They petitioned the City Council to re-christen it South L.A., hoping to remove the stigma. That community discussion did not happen this time around, residents said.

General Jeff Page, who was born and raised in South L.A., said there is community pride attached to a place’s name and that residents should be considered when a change is made.

“Whether it’s South-Central L.A. or whether its South L.A., we need to be clear exactly what we’re doing as a community,” he said. “And it should not be City Hall dictating how communities are defined.”