Obama to require steeper emissions cuts from US power plants

By JOSH LEDERMAN27 minutes ago 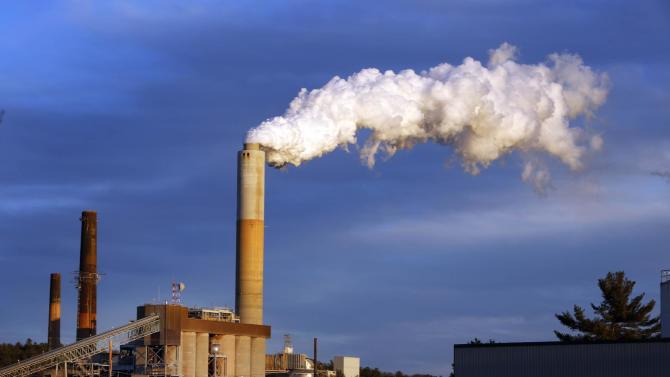 FILE – In this Jan. 20, 2015 file photo, a plume of steam billows from the coal-fired Merrimack Station in Bow, N.H. President Barack Obama on Monday, Aug. 3, 2015, will unveil the final version of his unprecedented regulations clamping down on carbon dioxide emissions from existing U.S. power plants. The Obama administration first proposed the rule last year. Opponents plan to sue immediately to stop the rule’s implementation. (AP Photo/Jim Cole, File)NEW YORK (AP) — President Barack Obama will impose even steeper cuts on greenhouse gas emissions from U.S. power plants than previously expected, senior administration officials said Sunday, in what the president called the most significant step the U.S. has ever taken to fight global warming.Related Stories

A year after proposing unprecedented carbon dioxide limits, the Obama administration was poised to finalize the rule at a White House event on Monday. Obama, in a video posted to Facebook, said the limits were backed up by decades of data and facts showing that without tough action, the world will face more extreme weather and escalating health problems like asthma.”Climate change is not a problem for another generation,” Obama said. „Not anymore.”In his initial proposal, Obama had mandated a 30 percent nationwide cut in carbon dioxide emissions by 2030, compared to 2005 levels. The final version, which follows extensive consultations with environmental groups and the energy industry, will require a 32 percent cut instead, according to Obama administration officials, who weren’t authorized to comment by name and requested anonymity.Opponents said they would sue the government immediately. They also planned to ask the courts to put the rule on hold while legal challenges play out.The final version also gives states an additional two years — until 2022 — to comply, officials said, yielding to complaints that the original deadline was too soon. States will also have until 2018 instead of 2017 to submit their plans for how they intend to meet their targets.But the administration will attempt to incentivize states to take action earlier by offering credits to states that boost renewable sources like wind and solar in 2020 and 2021, officials said.The focus on renewables marks a significant shift from the earlier version that sought to accelerate the ongoing shift from coal-fired power to natural gas, which emits far less carbon dioxide. The final rule aims to keep the share of natural gas in the nation’s power mix the same as it is now.The stricter limits included in the final plan were certain to incense energy industry advocates who had already balked at the more lenient limits in the proposed plan. But the Obama administration said its tweaks would cut energy costs and address concerns about power grid reliability.The Obama administration previously predicted the emissions limits will cost up to $8.8 billion annually by 2030, although it says those costs by health savings from fewer asthma attacks and other benefits. The actual price won’t be clear until states decide how they’ll reach their targets, but the administration has projected the rule would raise electricity prices about 4.9 percent by 2020 and prompt coal-fired power plants to close.In the works for years, the power plant rule forms the cornerstone of Obama’s plan to curb U.S. emissions and keep global temperatures from climbing, and its success is pivotal to the legacy Obama hopes to leave on climate change. Never before has the U.S. sought to restrict carbon dioxide from existing power plants.By clamping down on power plant emissions, Obama is also working to increase his leverage and credibility with other nations whose commitments he’s seeking for a global climate treaty to be finalized later this year in Paris. As its contribution to that treaty, the U.S. has pledged to cut overall emissions 26 percent to 28 percent by 2025, compared to 2005. Other major polluting nations have also stepped up including China, which pledged to halt its growth in emissions by 2030 despite an economy that’s still growing.America’s largest source of greenhouse gases, power plants account for roughly one-third of all U.S. emissions of carbon dioxide and other heat-trapping gases blamed for global warming. Obama’s rule assigns customized targets to each state, then leaves it up to the state to determine how to meet their targets.Even before the rule was finalized, more than a dozen states announced plans to fight it. At the urging of Senate Majority Leader Mitch McConnell of Kentucky, some Republican governors have declared they’ll simply refuse to comply, setting up a certain confrontation with the EPA, which by law can force its own plan on states that fail to submit implementation plans.Yet even in many of those states, power companies and local utility authorities have started preparing plans to meet the targets. New, more efficient plants that are replacing older and dirtier ones have already pushed emissions down nearly 13 percent since 2005, putting them about halfway to meeting Obama’s goal.In Congress, lawmakers have sought to use legislation to stop Obama’s regulation, and McConnell has tried previously to use an obscure, rarely successful maneuver under the Congressional Review Act to allow Congress to vote it down.The more serious threat to Obama’s rule will likely come in the courts. The Electric Reliability Coordinating Council, which represents energy companies, said 20 to 30 states were poised to join with industry in suing over the rule.The Obama administration has a mixed track record in fending off legal challenges to its climate rules. Earlier this year, a federal appeals court ruled against 15 states and a coal company that tried to block the power plant rule before it was finalized. The Supreme Court has also affirmed Obama’s authority to regulate pollution crossing state lines and to use the decades-old Clean Air Act to reduce greenhouse gases — the legal underpinning for the power plant rule.But the high court in June ruled against his mercury emissions limits, arguing the EPA failed to properly account for costs. Federal courts have also forced Obama to redo other clean air standards that industry groups complained were too onerous.With the end of Obama’s presidency drawing nearer, his climate efforts have become increasingly entangled in the next presidential election. The power plant rule won’t go into effect until long after Obama leaves office, putting its implementation in the hands of his successor. Among other Republican critics, 2016 candidate and Wisconsin Gov. Scott Walker has said he would drastically scale down the EPA if elected and shift most of its duties to state regulators.__Reach Josh Lederman on Twitter at http://twitter.com/joshledermanAP

By Brett LoGiurato10 hours ago 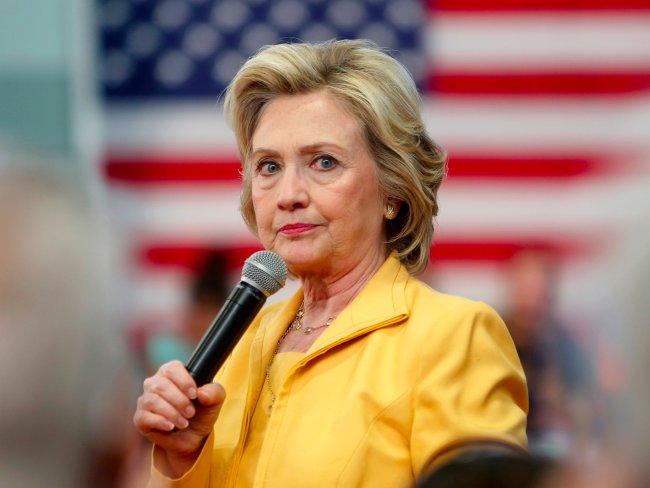 (AP) Democratic presidential candidate Hillary Clinton during a campaign stop Tuesday in Nashua, New Hampshire. She has received her worst favorability rating ever. She has lost ground on Republicans’ three strongest candidates. And she is perceived to be about as honest and trustworthy as Donald Trump.Those are some of the troubling numbers for former Secretary of State Hillary Clinton in a new pollreleased Thursday by Quinnipiac University.The poll still shows her with a commanding lead in the Democratic race, as she leads with 55% of the Democratic vote nationwide.US Sen. Bernie Sanders (I-Vermont), who is running as a Democrat, grabs 17% of the vote. Vice President Joe Biden, who has not yet said whether he will run, gets 13% support from Democratic primary voters.From there, though, the numbers show some complications for the Democratic front-runner. For one, Biden is running about as well against top Republicans in hypothetical general-election matchups. She has lost significant ground against those opponents since Quinnipiac’s poll from May.Here’s a quick breakdown:Clinton trails former Gov. Jeb Bush of Florida (R) 42-41. She led Bush by 10 points in May. Biden, on the other hand, leads Bush by 1 point.;Clinton leads Gov. Scott Walker of Wisconsin (R) 44-43. She led Walker by 8 points in May. Biden is tied with Walker. 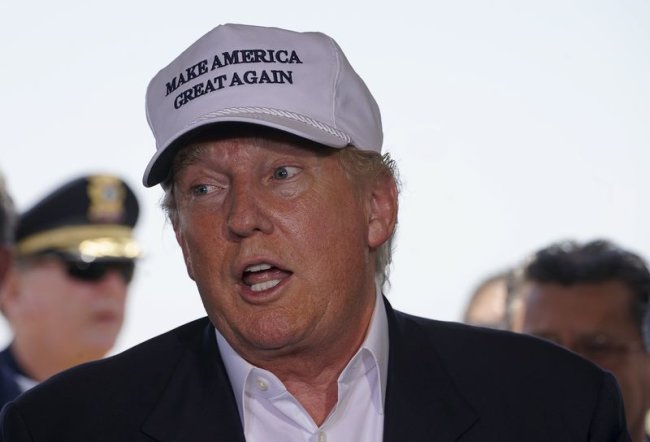 (Thomson Reuters) Republican presidential candidate Donald Trump at a news conference near the US-Mexico border. Clinton does, however, lead real-estate magnate Donald Trump by 12 points in a theoretical general-election matchup.”The good news for Secretary Hillary Clinton is that she is over 50% among Democrats and has a double-digit lead over Trump,” Tim Malloy, the assistant director of the Quinnipiac University Poll, said.”The not-so-good news is that she is locked in too-close-to-call races with Wisconsin Gov. Scott Walker and former Florida Gov. Jeb Bush. And Vice President Joseph Biden runs just as well as her against the top Republicans.”Clinton also recorded her worst favorability score ever in the Quinnipiac survey. Just 40% of voters view her favorably, compared with 51% who see her in an unfavorable light. Biden gets a 49-39 split on favorability, his best score in seven years. Both Bush (43-41) and Walker (36-27) are in positive territory.Finally, continuing a trend seen in key swing-state polls last week, most voters do not view Clinton as „honest and trustworthy.” By a 57-37 margin, poll respondents said Clinton was not honest and trustworthy. And 52% said she didn’t care „about their needs or problems.”The „honest and trustworthy” numbers put her almost on par with Trump: Voters say by a 58-33 margin that he is not honest and trustworthy.”Republicans say Trump is honest and Democrats say Clinton is honest, but among all voters, both candidates come up short,” Malloy said. „How can you become a general election front-runner if most voters don’t trust you?”NOW WATCH: Scientists are astonished by these Goby fish that can climb 300-foot waterfallsMore From Business Insider Hillary Clinton is trailing the 3 strongest Republican candidates in 3 key swing states;POLL: Hillary Clinton still dominates the 2016 field;2016 POLL: Marco Rubio has surged ‘to the front of the pack’