Jeb Bush speaks in Londonderry, N.H., last week. (Photo: Jim Cole/AP)Mystery solved!Thousands of Iowans checking their mailboxes late last week were greeted by a photo of a smiling Jeb Bush on the back of a flier touting the former Florida governor and 2016 Republican

presidential hopeful’s conservative bona fides.But the mailer — paid for by the super-PAC Right to Rise and sent to about 86,000 Iowa households — morphed into a momentary viral distraction for the campaign as online observers quickly pointed out that Bush’s left hand appeared to be black.

“Jeb Bush has a photoshopped photo for an ad which gives him a black left hand and much different looking body,“ Donald Trump, the Republican frontrunner, tweeted. “Jeb just can’t get it right!”On Saturday, Right to Rise spokesman Paul Lindsay explained that in the original photo, a woman standing next to Bush cast a dark shadow on his hand. The super-PAC’s not-so-super art department then superimposed the image of Bush on a stock Cedar Rapids backdrop.

By Marie Julien56 minutes ago 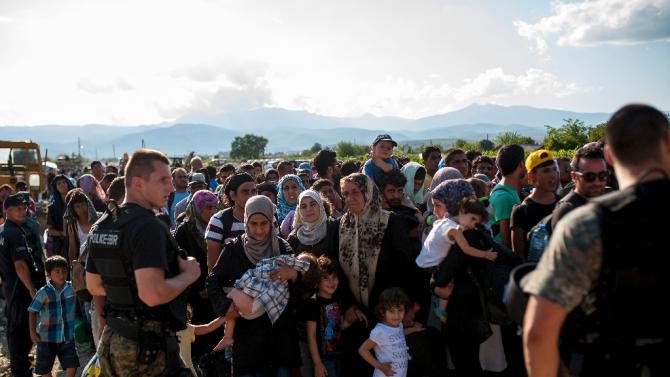 Berlin (AFP) – German Chancellor Angela Merkel and French President Francois Hollande will meet in Berlin on Monday to give a new push to European efforts to tackle the biggest migrant crisis in 50 years.Related Stories

The pair will also hold talks on the resurgence of violence in Ukraine and will be joined by that country’s president Petro Poroshenko later in the day.A joint press conference by the trio will be followed by a working dinner.Merkel and Hollande have put enormous political onus on resolving Ukraine’s 16-month pro-Russian uprising and returning peace to the European Union’s turbulent eastern front.Monday’s talks will be notable for their exclusion of Russian leader Vladimir Putin.The French and German leaders had spent 17 hours locked up with Putin and Ukraine’s Poroshenko in the Belarusian capital Minsk in February before emerging with a peace deal that promised to end the fighting quickly and resolve all political disputes by the end of the year. 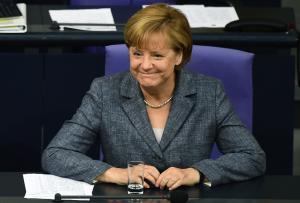 German Chancellor Angela Merkel, seen during a debate at the Bundestag in Berlin, on August 19, 2015 …Yet the so-called Minsk II accord has repeatedly been broken by the warring sides. The death toll in the war is meanwhile steadily approaching 6,900.A Ukrainian source said Putin’s exclusion pointed to the fact that „France and Germany are in the same boat as us”, but a French source quickly quashed any interpretation of a „diplomatic war against Russia”.The diplomatic push on migrants meanwhile comes as the EU is grappling with an unprecedented influx of people fleeing war, repression and poverty in what the bloc has described as its worst refugee crisis since World War II.Official figures show a record 107,500 migrants crossed into the EU last month and there are mounting calls for the bloc to adopt a more unified approach in dealing with the influx.- ‘New impetus on migrants needed’ – 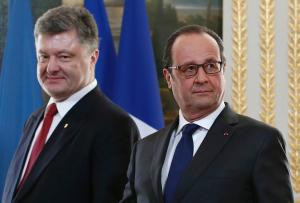 French President Francois Hollande (R) and Ukrainian President Petro Poroshenko arrive for a diploma …”There has to be a new impetus so that what has been decided is implemented,” a source in the French presidency said, referring to EU decisions taken in June to tackle the crisis.”The situation is not resolving itself,” the source said, adding that the decisions made by the EU „are not sufficient, not quick enough and not up to the task”.Their priorities include compiling a list of countries whose nationals would not be considered asylum seekers except in exceptional personal circumstances.The EU has hitherto failed in efforts to draw up a common list of such countries.The French and German leaders will also move to help speed up the setting up of reception centres in overwhelmed Greece and Italy — two countries that have borne the brunt of the crisis — to help identify asylum seekers and illegal migrants.”As long as these reception centres are not there and there is no internal solidarity within the EU, the return of migrants — which will dissuade further new arrivals — will not happen,” the source added.In Rome, Italian officials said the coastguard had rescued 4,400 migrants from 22 boats in the Mediterranean on Saturday alone in what was understood to be the highest daily figure in years.Italian Foreign Minister Paolo Gentiloni has warned that the deepening crisis could pose a major threat to the „soul” of Europe.”On immigration, Europe is in danger of displaying the worst of itself: selfishness, haphazard decision-making and rows between member states,” Gentiloni told Il Messaggero.German Vice Chancellor Sigmar Gabriel meanwhile said that a four-fold increase in asylum requests — expected to top 800,000 this year — was the country’s „biggest challenge since reunification” in 1990.