Jeb, get ahold of yourself

Jeb Bush has dropped to around 10 percent in polls for the Republican presidential candidates. (Photo: Delcia Lopez/The Monitor via AP)Despite what you may have read or watched or come across in a fortune cookie, Donald Trump isn’t actually running away with the Republican nomination, and the only thing he’s “dominating” right now is media coverage. Here’s some perspective for you: As late as October 2011, a pizza magnate named Herman Cain was leading the Republican field with roughly 30 percent of the vote, or about the same as Trump’s zenith in recent polls.The main difference is that Mitt Romney had locked down the establishment vote in 2011 and was running just a few points behind. Trump, on the other hand, looks like the Big Kahuna mainly because the vast majority of the Republican vote remains divided among more than a dozen serious competitors, none of whom has yet managed to pull away from the pack.In other words, Trump isn’t really winning the presidential contest so much as all the other candidates are losing it. And no one is losing it faster or with more determination than Jeb Bush.It was a spectacularly bad week for Bush, who has dropped to around 10 percent in both national and New Hampshire polls. (The latter matters more than the former.)First he tried to out-Trump Trump on illegal immigration by decrying so-called anchor babies. Then he tried to clean that up, in a petulant news conference, by saying the whole problem really started with Asians. Because, you know, what Republicans really need right now is another massive nonwhite segment of society that won’t vote for them.

And all of this was playing out while Bush’s campaign admitted that some of its top staff was already taking pay cuts in anticipation of a long slog through the winter, which is generally not a sign that things are going according to plan.What surprises me about Bush isn’t that he’s a little out of practice. It’s more that he seems not to fully grasp what makes his campaign viable in the first place.If you think about it for more than a minute, the Bush dynasty that Jeb seeks to restore is highly unusual, if not anomalous, in American politics. Oh, sure, we’ve always had families who influence state or national politics from one generation to the next — Roosevelts and Kennedys, Browns and Cuomos. There’s nothing new about that.But in just about every case you can think of, those dynasties are all built on the idea of returning to some moment of greatness or some larger ideal. The whole Kennedy fetish, spanning half a century now, is at its core a desire to restore the long-lost promise of Camelot, which for a lot of ’60s liberals still represents a utopian moment (JFK’s centrism notwithstanding).To take a more current example, the underlying premise of Hillary Clinton’s presidential campaigns — both in 2008 and now — is a certain nostalgia for the economic boom time of the 1990s. That’s not an intergenerational dynasty, exactly, but it will be once Chelsea jumps intothe arena.The Bush dynasty is different. George H.W. Bush was, truth be told, a mediocre politician who had to prove he wasn’t the Connecticut moderate his father, Prescott, had been. (This he achieved mostly by eating pork rinds.) He found himself atop the ticket in 1988 almost by default and then became only the second elected president since the Great Depression to be booted from office after a single term.

Stance of some E. Europe nations on migration ‘scandalous’-France 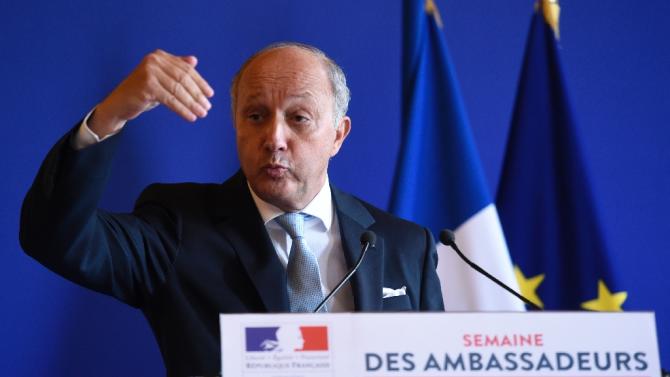 Paris (AFP) – The attitude of a number of eastern European countries towards the migrant crisis facing the EU is „scandalous”, French Foreign Minister Laurent Fabius said Sunday, pointing in particular to an anti-migrant barrier in Hungary.”When I see a certain number of European countries, particularly in the east, who do not accept quotas (of migrants), I find it scandalous,” he told Europe 1 radio.Germany has acted „courageously,” with the support of France, „but Europe as a whole must assume its responsibilities,” said Fabius.He specifically pointed to a razor-wire barrier along Hungary’s border with non-EU member Serbia, aimed at keeping out migrants, which Fabius said „did not respect Europe’s common values”.The barrier consisting of three rolls of razor wire along the 175-kilometre frontier is however failing to prevent people getting across, AFP saw in a recent visit.A four-metre-high (13-foot) fence is due to follow and is already being built by the Hungarian army which will „also provide a defence against illegal border-crossers,” according to the country’s defence ministry.Hungary, a member of the European Union and of the visa-free Schengen zone, has this year intercepted more than 140,000 migrants entering from Serbia.

Russia’s Ailing Navy: A Toothless Tiger? Posted By: Brinda BanerjeePosted date: August 30, 2015 12:40:51 PMIn: Politics, Russia61 CommentsWhile Russia’s annexation of Crimea in 2014 and its current standoff with Ukraine have created an atmosphere of tension and suspicion in the region, a closer look at Russia’s naval fleet reveals that the country may not be as much of an international military power as Moscow would have the world believe.