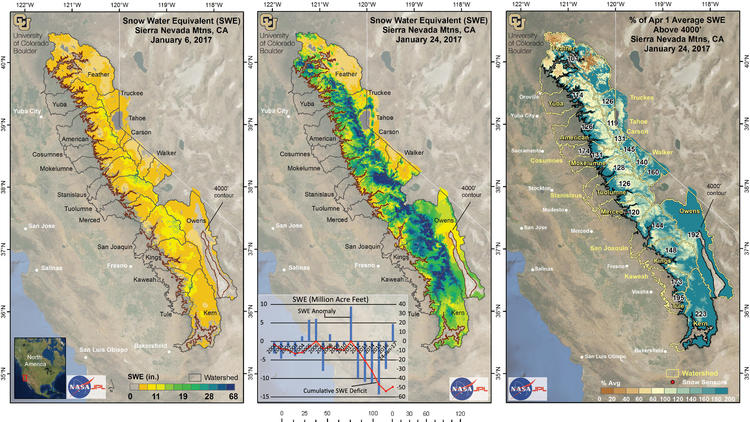 These maps show how much water was stored in the Sierra snowpack on Jan. 6 (left) and Jan. 24 (center), 2017. (NASA)In order to determine how much less snow the Sierra experienced during that time, researchers used satellite and ground sensor data to calculate the size of seasonal snowpack and compared it with the historical average. What they found was that the Sierra Nevada collected about 17 trillion gallons less water than if the years had normal snowfall. January’s storms, however, replenished more than a third of that deficit, according to researchers. They, along with storms in the previous months, succeeded in removing about half the state from lingering drought conditions by filling reservoirs and raising Sierra snowpack to rooftop levels, according to the U.S. Drought Report. But even though the rain and snow totals are eye-popping, their long-term impact on the drought remains far from clear, according to Jay Lund, director of the Center for Watershed Sciences at UC Davis, who was not involved in the study.Over the last five years, numerous cities have turned to underground wells and basins for water. Exactly how much water has been pumped out over the years — and how much remains — is unknown, water officials say.“That’s where the deficit is really concentrated. Every time [consumers] didn’t have enough water, they pumped,” Lund said. 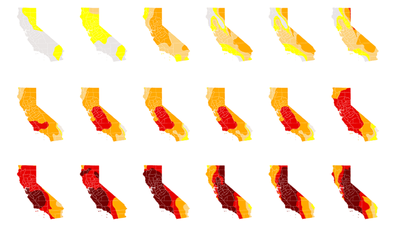 257 drought maps show California’s deep drought and current recoveryDWR officials acknowledge that California’s groundwater hasn’t been tracked as far back in time, or in as much detail, as the state’s surface reservoirs and snowpack. In fact, officials may never arrive at an accurate measure. “First of all, groundwater is pretty hard to estimate volume for. It’s buried,” Lund said. “It varies with the local geology. And if you want to ask how much is the total volume underground – how deep do you want to go?”In many cases, consumers have pumped water from groundwater basins much faster than Mother Nature can replenish the stuff — a phenomenon that has caused the ground level in parts of California to sink. A 2015 A NASA report showed that groundwater pumping has caused land in some parts of the San Joaquin Valley to subside at an alarming rate.Researchers say that when this winter’s snow begins to melt later in the year, the runoff will help replenish localized groundwater and aquifers along river channels and floodplains. However, other parts of the state hit hard by drought won’t reap the same benefits. 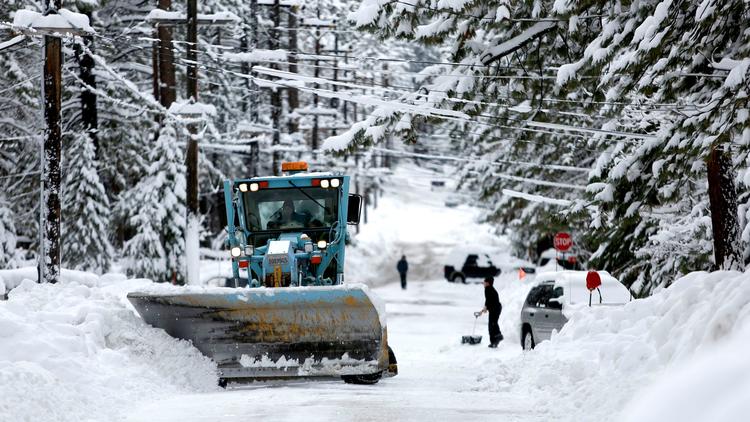 A plow removes snow along Aspen Ave., in South Lake Tahoe in January. (Gary Coronado / Los Angeles Times)“It is important to realize that any aquifer recharge that occurs as a result of this winter’s storms is just a small uptick in a century-long decline of groundwater storage, at least with respect to the once-vast reserves in the Central Valley,” said James Famiglietti, a senior water scientist at JPL. “The drought may be easing, but California’s chronic water scarcity is here to stay.”The study was produced by JPL and the University of Colorado’s Center for Water Earth Science and Technology, and tapped NASA’s satellites to measure the Sierra Nevada snowpack, which turns into a third of California’s water supply when it melts in the spring and summer.
Giant Lava Stream Exploding into Ocean in Hawaii
Associated Press Videos

Giant Lava Stream Exploding into Ocean in Hawaii A dramatic and dangerous stream of lava from Kilauea Volcano is pouring out of a sea cliff on Hawaii Island, splashing into the Pacific Ocean below and exploding upon impact. (Feb. 1)

Business The west’s largest coal plant – and seventh biggest source of CO2 emissions in the U.S. – may close Salon.com 20 hours ago

The National Wildlife Research Center, NWRC, is the research arm of the Wildlife Services program, part of the Animal and Plant Health Inspection Service, a USDA agency.

„This invasive species also threatens the health of people, wildlife, pets, and other domestic animals,” Keirn said. „As feral swine populations continue to expand across the country, these damages, costs, and risks will only keep rising.”

According to the new report, $1.5 billion is spent in the United States each year to repair and prevent damage done by wild pigs.

Researchers say that number is likely to rise as wild pig populations continue to grow and spread through the United States. It is estimated that roughly 6 million invasive wild pigs currently inhabit the U.S. They’re found in 35 states.

Researchers at NWRC used wild pig data collected between 1982 and 2012 to plot the widening ranges of wild pigs and to predict their territorial expansion moving forward.

The largest wild pig populations are found in the South, but a team of scientists led by Nathan Snow found the pigs have been moving northward at a clip of 4 to 8 miles per year. In 30 to 50 years, Snow and his colleagues predict, wild pigs could be found living in all 50 states and every county in the country. Their conquest could happen even quicker if boars introduced into Canada continue to move southward.

Wild pigs reproduce quickly and often, eat nearly anything and can survive in a variety of habitats. They also have no natural predators.

Feral pigs, or razorbacks, were first established in the 1500s, when colonists brought over wild and domesticated pigs for food. Some wandered off and spawned small feral populations. The Eurasian wild boar, or Russian wild boar, Sus scrofa, was introduced to the United States in the 19th century for hunting. Today, wild invasive pigs consist of a combination of feral pigs, pure wild boars and hybrids of the two.

Related
Like us on Facebook for more stories from UPI.com
Business Young Father of Two Dies of Tooth Infection. How Can That Happen?
Korin Miller Wed, Feb 1 12:25 PM PST 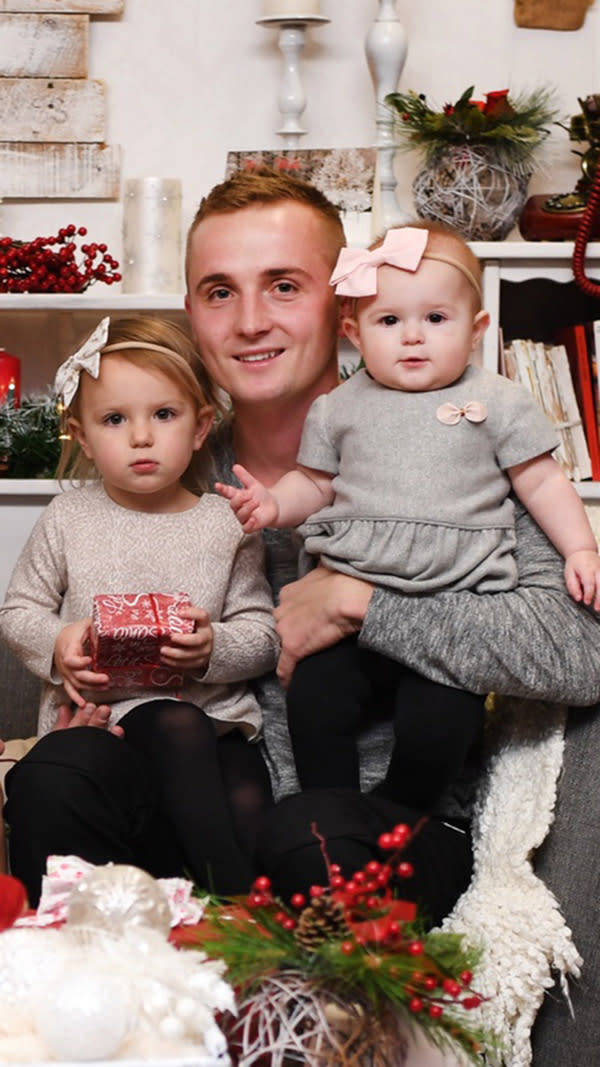 Vadim Kondratyuk Anatoliyevich and his children. (Photo: GoFundMe)A young California truck driver and father of two is making headlines after he suddenly died as the result of complications from a toothache.Vadim Kondratyuk Anatoliyevich first complained of a toothache two weeks ago, when he was on a routine work trip to New York, according to a GoFundMe page set up for his family. He stopped in Oklahoma and was seen by a dentist, who looked at the infection, cleaned it, and gave him antibiotics. He continued driving and felt better, but when he arrived in New York, he was in pain again and his mouth became swollen.Anatoliyevich’s brother Miroslav met up with him to help him drive home faster, and noticed at one point that Vadim was having trouble breathing and couldn’t stand up. Then in Utah, Miroslav drove his brother to the nearest hospital, where doctors said they “made it just in time.” The infection from Anatoliyevich’s tooth had progressed and spread to the rest of his body. His lungs had fluid in them, and he couldn’t breathe on his own.Anatoliyevich’s wife, Nataliya, told KTLA5 that she received a call from her husband’s doctor, saying Vadim was gravely ill. “The doctor said, ‘Tonight is the night he’s going to die, because we did everything we can and nothing seems to work.’ It’s just the bacteria and the infection keeps growing to his lungs and they can’t clean it out,” she said. Eventually, his heart stopped beating. He died on Jan. 30 at the age of only 26. According to Nataliya, her husband had diabetes but was otherwise healthy.The story is tragic and scary, and Dr. Susan Maples, author of Blabber Mouth! 77 Secrets Only Your Mouth Can Tell You to Live a Healthier, Happier, Sexier Life, tells Yahoo Beauty that dental infections can lead to serious health complications more often than you might think. 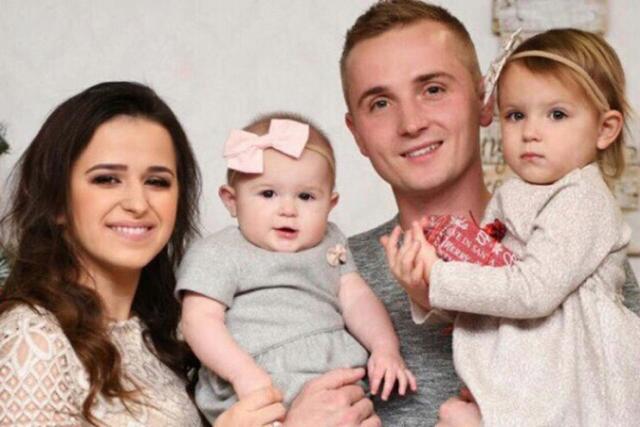 The Anatoliyevich family (Photo: GoFundMe)Unlike your mouth, your lungs are a sterile cavity, she explains. When bacteria from your mouth gets into your lungs, it can replicate quickly and cause a serious infection like pneumonia — and this can happen as a result of a tooth infection or gum disease. Dr. Martha Cortes of Cortes Advanced Dentistry tells Yahoo Beauty that people can actually breathe in pathogenic biofilms from their mouth into their lungs, where they can create an infection. “I’ve seen people get lung issues because of an infection in their mouth,” she says. “Periodontal disease is a big deal.”It’s not just lungs that are a concern: Maples notes that bacteria from dental infections can get into your bloodstream and affect various organs, including your heart.Dr. Mark S. Wolff, a professor and chair of the Department of Cardiology and Comprehensive Care at the New York University College of Dentistry, tells Yahoo Beauty that dental infections can even affect your brain and cause abscesses there. “It’s important for people to recognize that it’s not just a tooth — there are a lot of risks of the infection spreading elsewhere,” he says.That’s why Wolff recommends that people see a dentist ASAP if they notice they have any swelling in their mouth. “Anything that hurts when you press your finger on the outside of your gums, see the dentist,” he says.Cortes adds it’s crucial to regularly brush your teeth, floss, and follow good dental hygiene.Most gum disease and periodontal infections, including cavities, don’t hurt which, is why Maples says it’s so important to routinely see your doctor. “Your dentist is able to find these problems before they get out of hand and treat them as needed,” she says.Of course, most people can develop a tooth or gum infection and won’t die from it, Maples says, but if your immune system is compromised, it could develop into a more serious problem.Adds Cortes: “These complications can happen. It’s creepy.”Related: Nanny Donates Part of Liver for the Child She Cares For Let’s keep in touch! Follow Yahoo Beauty on Facebook, Twitter, Instagram, andPinterest. 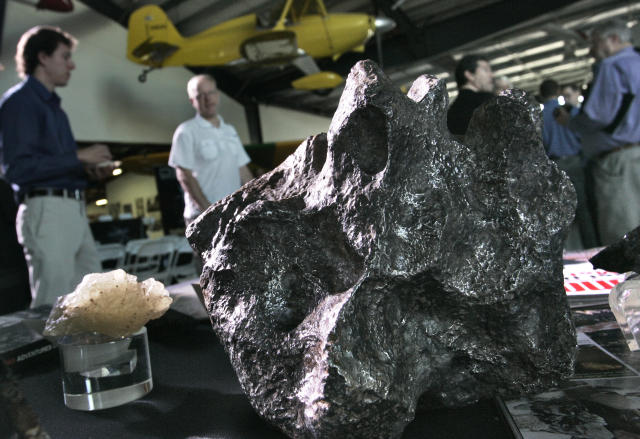 Space rocks appear to be taking aim at Earth. The fourth asteroid this year buzzed the Earth about midday Thursday, passing between the Earth and moon.It wasn’t quite as close as the one in September that missed us by just 24,000 miles, nearly as close as some geosynchronous satellites, or Sunday’s visitor, which passed within 32,200 miles. The latter, which was just 19 feet wide, wasn’t spotted until a few hours before it flew past.Asteroid 2017 BS32, which was first spotted Monday by astronomers from the Panoramic Survey Telescope & Rapid Response System, was about 100,000  miles out when it made its pass. It measures 36-by-82 feet — about the size of a bus — and when it made its flyby at 3:23 p.m. EST, it was traveling more than 25,000 mph. The asteroid was 60 percent closer to Earth than the moon, which, on average, is 239,000 miles away.Paul Cox of the Slooh observatory said the recent blitz of tiny planetoids could indicate they’re pieces of a bigger planet that has broken up.”However, when we reviewed the orbits of each of the asteroids, we found no correlation between them — showing clearly they weren’t associated in any way,” he said in an email to CNet.”So we were certainly left with the opinion that these small clusters are purely coincidental. Having said that, they still surprise us when we see them.”Actually 2017 BS32 was one of three asteroids to breeze past Thursday but the other two were much further out, NASA said. One of them, with a diameter of 43 feet, was 1.3 million miles out and the other, 49 feet in diameter, was 2.5 million miles away.A 44-foot asteroid is expected to pass within 2.7 million miles Friday, and a 15-foot visitor is expected to pass within 592,000 miles Sunday, the Jet Propulsion Laboratory said.Asteroids rarely collide with Earth, but when they have, remote parts of Russia seem to have attracted them. The last space rock to make major entrance was the one that exploded over Chelyabinsk in February 2013. It released energy comparable to an atomic bomb.The Chicxulub crater off the Yucatan Peninsula in Mexico is believed to have been caused by an asteroid 66 million years ago, leading to the extinction of the dinosaurs.