U.S.Pictures Of Lava Still Spilling Out Of Hawaii’s Kilauea’s Volcano 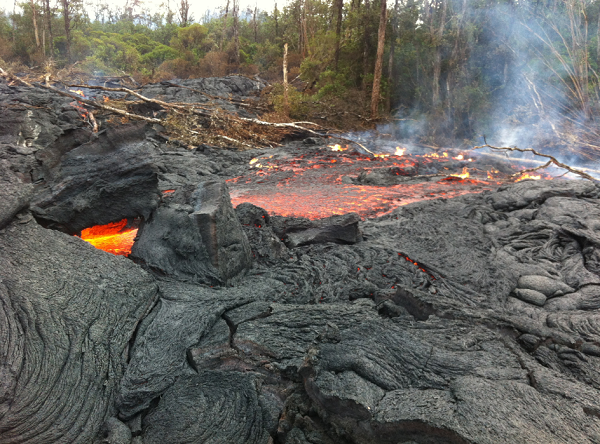 Lava spewing into the ocean from Hawaii’s seaside Kamokuna cliff isn’t thrusting out as intensely as the firehose-like flow of lava that was first seen sprouting out of the lava delta back on New Year’s Eve. However, bits of molten lava and black sand spotted flying through the steam plume on the volcano’s south coast Thursday confirmed that Hawaii’s Kilauea volcano is still very active, according to the Hawaiian Volcano Observatory.Kilauea first erupted 34 years ago and has continued to remain active in the eastern rift zone of Pu’u ‘O’o into the Kamokuna ocean cliff entry. The volcano’s New Year’s Eve eruption, which was caused when 21 acres of lava delta to collapsed into the ocean, has outlasted most cases of lava streams that occasionally sprout out of Kamokuna. In most cases, lava streams only last one to two days.Officials are concerned that the ongoing lava stream at Kamokuna will lead to further collapses of the sea cliff, which could pose an extreme threat to people and wildlife on nearby land as well as boats who use the ocean entry near Kamokuna’s site. The only way to end the ongoing flow of lava is if the actual volcano stops erupting or if a large earthquake can prevent the lava from flowing.“The only thing we can surmise is the offshore topography apparently is so steep that, as the lava is flowing in and forming all this new rubble, it’s just slipping down into deeper parts of the ocean and not piling up to form a new delta,” Janet Babb, a geologist at the United States Geological Survey Hawaiian Volcano Observatory, told the New York Times Wednesday. “Lava will continue to flow into the ocean until it’s disrupted.Normally when lava from an eruption hits the salty water, it causes an explosion that sends spatter (bits of molten lava) shooting out of the ocean followed by a steamy cloud of acid. Underneath the ocean’s surface, the lava starts to cool and creates rubble, which usually stacks up resulting in a rocky terrain that the lava settles into, creating a lava deltas such as Kamokuna.Following the New Year’s Eve collapse, lava tubes were exposed, resulting in more than 100 feet of lava continuing to flow down into the sea.View image on Twitter 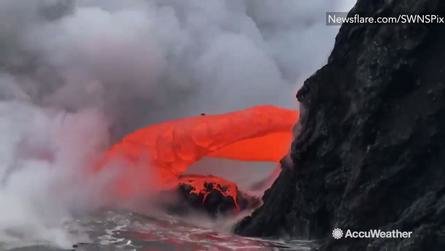 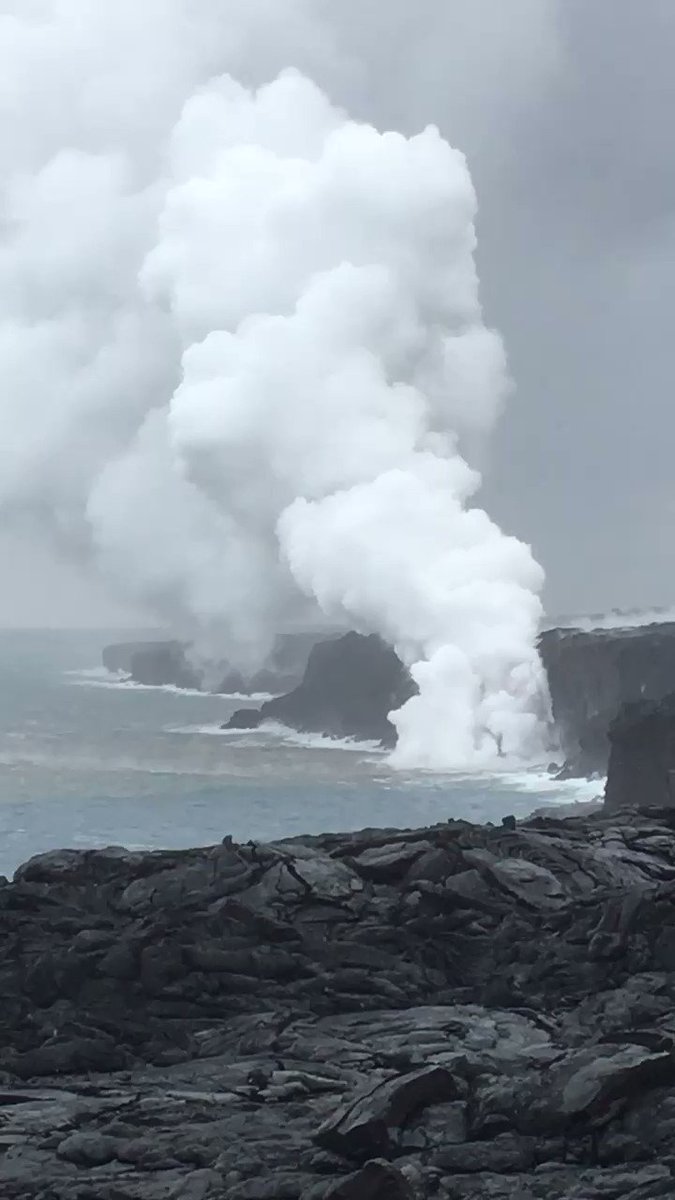 HONOLULU (AP) — A section of sea cliff above a massive „firehose” lava flow on Hawaii’s Kilauea Volcano has collapsed and splashed into the ocean as tourists and geologists watched.A large crack in the section of cliff above the gushing molten lava stream gave way Thursday afternoon as scientists stood just yards away. Geologists with Hawaii Volcano Observatory were at the site to monitor the crack when it collapsed and captured the scene on video .Later in the day, a tour boat was cruising by when another section of the cliff collapsed. Video shows guests gasping and screaming as the huge piece of land splashes down in front of them, sending debris high into the air.The collapse stopped the heavy stream of lava that had been arching out from near the top of the cliffs for weeks. The lava stream, dubbed a „firehose” flow because it shoots lava outward from the source like water from a hose, had recently increased in intensity.The massive Kilauea flow came from a lava tube at the Kamokuna ocean entry on the southeast side of the Big Island.The lava was gushing from a tube that was exposed when a huge, 26-acre lava rock delta collapsed into the ocean at the site on New Year’s Eve. That collapse triggered massive explosions and giant waves in the area.The USGS warned that a portion of unstable cliff may still be attached and could break off at any time.”This collapse yesterday did not diminish the hazards,” said USGS geologist Janet Babb on Friday. „As long as lava continues to flow into the ocean, that area is still quite hazardous… there’s still potential for collapses of the sea cliff there.”When the molten lava hits the cool seawater, it reacts and causes explosions that can throw large chunks of hot rock and debris inland, where tourists hike in to see the lava, and seaward, where tour boats cruise the shoreline.The gasses released from the reaction are also dangerous to breathe, and shards of volcanic glass can be thrown into the air when the hot lava meets the cool seawater.The National Park Service has set up a designated viewing area far from the flow where visitors can safely view the lava.But some people cross lines and venture into closed, dangerous areas, officials said. 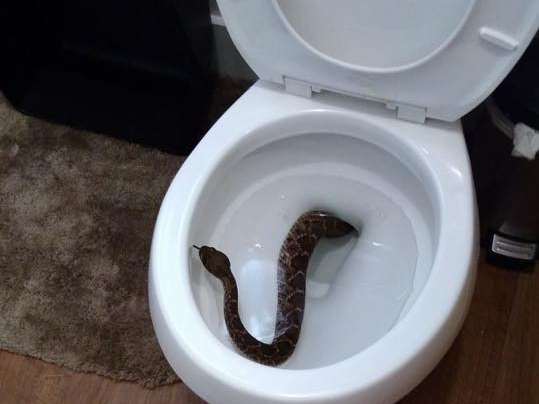 (Who forgot to flush?Courtesy Big Country Snake Removal) When young Isac Mcfadden of Abilene, Texas, got up to use the bathroom recently, he found an unexpected surprise in the toilet.But he knew the „clump” wasn’t the sort to handle on his own, so he called for his mom.”I found this big clump and I knew it was (a) snake,” he told the local CBS affiliate WTSP.Not just any snake. A western diamondback rattlesnake, one of the most dangerous species in the US.The boy’s mother took a shovel and killed the unwelcome toilet explorer. But the family also called Big Country Snake Removal, just to make sure the issue was taken care of.It wasn’t. 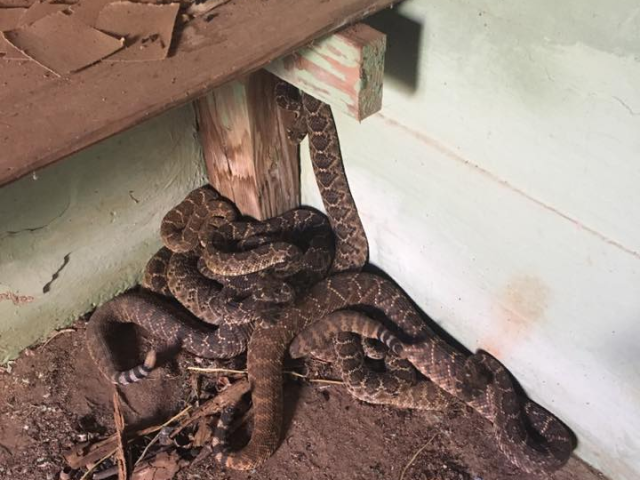 (Courtesy Big Country Snake Removal) As Nathan Hawkins, the owner of the snake-removal business, found out shortly after he arrived, 23 more of the rattlesnakes were nearby. Thirteen were hiding out in a cellar, and 10 were under the house, including five babies.On the Big Country Snake Removal Facebook page, the team explained how so many of the creatures could be there and escape notice: „It’s actually quite simple; rattlesnakes are secretive and can be very cryptic — They rely heavily on their camouflage. This is simply how they survive. Just because you don’t see them doesn’t mean they aren’t there…” 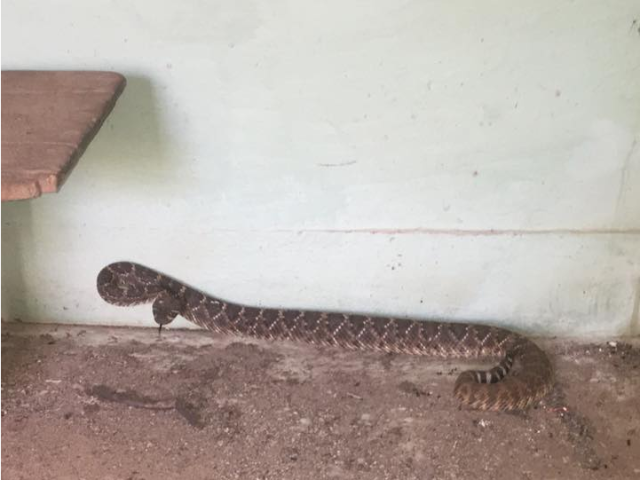 (Courtesy Big Country Snake Removal) With the proper tools, as the Big Country team told Business Insider via Facebook, such snakes can be removed without killing them, and the team was able to do just that for the remaining snakes at the Mcfadden abode.In general, Hawkins told CBS News, snakes can be relocated to safer locations or donated to schools, where they can be studied.Western diamondbacks tend to gather in dens during the winter to keep warm, which is why he knew to keep looking even after the Mcfaddens had disposed of the first one.In these cases, calling an expert is always a good idea. Inexperienced people who try to kill a snake more likely to be bitten, Hawkins said.”They’re actually very, very amazing creatures that are really misunderstood,” Hawkins told CBS.Related:
Watch TV shows, movies and more on Yahoo View, available now on iOS and Android.NOW WATCH: The US government just sank a giant ship on purpose — and the footage is amazing
More From Business Insider