A damaged spillway with eroded hillside is seen in an aerial photo taken over the Oroville Dam in OrovilleA damaged spillway with eroded hillside is seen in an aerial photo taken over the Oroville Dam in Oroville, California, U.S. February 11, 2017. California Department of Water Resources/William Croyle/Handout via REUTERS By Sharon Bernstein OROVILLE, Calif. (Reuters) – Emergency crews early on Monday prepared loads of rock to be dropped by helicopters to seal a crumbling spillway that threatens to inundate communities along the Feather River in Northern California, local media reported.Almost 200,000 people were ordered on Sunday to evacuate from the area below the Lake Oroville Dam, the tallest dam in the United States, after authorities said its emergency spillway could give way.Officials said the situation seemed less dire overnight but Sacramento television station KCRA reported that helicopters from around the state were sent to drop chest-high bags of rocks to close the hole in the spillway.The NBC affiliate showed dump trucks dropping off piles of rock, which were then loaded into the bags with backhoes. The operation to close the gap would begin as soon as it was feasible, the station said.The state Emergency Services Office and Department of Water Resources did not immediately respond to requests for comment.The water department said on Twitter on Sunday afternoon that the spillway next to the dam was „predicted to fail within the next hour” but it remained standing.The department said authorities were releasing water to lower the lake’s level after weeks of heavy rains in drought-plagued California.Overnight, state and local officials said the immediate danger had passed with water no longer flowing over the eroded spillway but they cautioned that the situation remained unpredictable.”Once you have damage to a structure like that it’s catastrophic,” acting Water Resources director Bill Croyle told reporters. But he stressed „the integrity of the dam is not impacted” by the damaged spillway.The earthfill dam is just upstream and east of Oroville, a city of more than 16,000 people north of the state capital of Sacramento. At 770 feet (230 meters) high, the structure, built between 1962 and 1968, is the tallest U.S. dam, exceeding the Hoover Dam by more than 40 feet (12 meters).‘DO NOT TRAVEL NORTH’ Officials said they feared the damaged spillway could unleash a 30-foot (9-meter) wall of water on Oroville. They said evacuation orders remained in place for some 188,000 people in the area and would be re-evaluated at dawn.The Yuba County Office of Emergency Services urged evacuees to travel east, south or west. „DO NOT TRAVEL NORTH TOWARD OROVILLE,” the department warned on Twitter.Evacuation centers were set up at a fairgrounds in Chico, California, about 20 miles (32 km) northwest of Oroville, but major highways leading south out of the area were jammed as residents fled the flood zone.Javier Santiago, 42, fled with his wife, two children and several friends to the Oroville Dam Visitors Center in a public park above the dam and the danger zone.With blankets, pillows and a little food, Santiago said: „We’re going to sleep in the car.”The Oroville dam is nearly full following winter storms that brought relief to the state after four years of drought.State authorities and engineers on Thursday began releasing water from the dam after noticing that large chunks of concrete were missing from the spillway.(Additional reporting, writing by Dan Whitcomb in Los Angeles, Chris Michaud in New York and Ian Simpson in Washington; Editing by Scott Malone and Bill Trott) 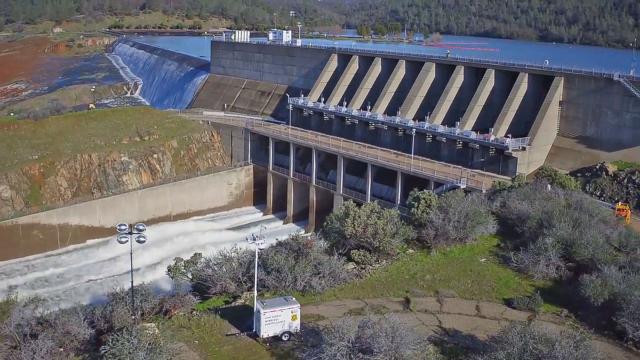 Scroll back up to restore default view.Officials in northern California ordered nearly 200,000 people to evacuate to safer ground Sunday as the country’s tallest dam threatened to release uncontrolled floodwaters downstream.Motorists jammed highways as thousands of residents fled the area downstream from the Oroville Dam, about 150 miles northeast of San Francisco, after authorities warned that the emergency spillway could fail, the National Weather Service said.Hundreds of cars lined Highway 99, creating a bumper-to-bumper traffic jam as people headed north, The Associated Press said.Raj Gill, who manages a Shell gas station in the region, was torn between evacuating and staying open to serve the steady stream of customers who passed through his establishment.”You can’t even move,” he told the AP. „I’m trying to get out of here, too. I’m worried about the flooding. I’ve seen the pictures; that’s a lot of water.”Lake Oroville, one of California’s largest manmade lakes, has swelled after a month of heavy rains. On Saturday water began topping the emergency spillway on the 770-foot-tall dam, the nation’s tallest, causing erosion damage that could lead to a surge of water being released, officials said.The lake is about 75 miles north of Sacramento and about 25 miles southeast of Chico. The dam is the tallest in the United States, according to the Los Angeles Times.Officials from California’s Department of Water Resources said they planned to use helicopters to drop rocks to fill in the gouge in the spillway.Residents of Oroville, Gridley, Live Oak, Marysville, Wheatland, Yuba City, Plumas Lake, and Olivehurst were all ordered to evacuate immediately, authorities said.Butte County Sheriff Kory Honea said officials made the decision to nearly double the volume of water being released from the dam to stop erosion at the top of the auxiliary spillway.”Hopefully, that will release pressure on the emergency spillway and they’ll find a repair to prevent a complete failure,” Honea said Sunday. „[The] situation is dynamic and could change anytime.”The lake had been lowered to 2 feet below the top of the emergency spillway due to the increased volume of water being released through the dam’s main spillway, Oroville mayor Linda Dahlmeier told ABC News.The lake level is being lowered at a rate of about 4 inches per hour, the mayor said, adding that the erosion area has stopped progressing and stabilized.California Gov. Jerry Brown issued an emergency order in response to the situation.”The state is directing all necessary personnel and resources to deal with this very serious situation,” Brown said in a statement Sunday.Moreover, the state’s National Guard said it would provide eight helicopters to assist in reconstructing the emergency spillway.The helicopters, along with two airplanes, will also be available today for search and rescue near the Oroville Dam, California National Guard Adjunct General David Baldwin said at a news conference Sunday.He added that the California National Guard would be ready to deploy if needed.As of this morning, water levels at the dam are continuing to drop, according to The Associated Press, leading to a halt in spillage.The Mercury News, a newspaper based out of the San Jose area, reported that three environmental groups — the Friends of the River, the Sierra Club and the South Yuba Citizens League — filed a motion with the federal government in 2005 as part of Oroville Dam’s relicensing process, urging federal officials to bolster the dam’s emergency spillway.Within that motion, the groups warned that the dam did not meet modern safety standards, the Mercury News reported.The Federal Energy Regulatory Commission rejected their request, the paper said.
U.S.

Threat at Oroville Dam slightly diminishes, but nearby areas still under evacuation order

More than 100,000 people in communities downstream of Lake Oroville were told to evacuate Sunday evening after authorities grew concerned that dangerous flood waters would start surging out of the huge reservoir. The flood threat emerged suddenly Sunday afternoon when a hole developed in the auxiliary spillway that was being used for an emergency spill to lower the level of the full-to-the brim reservoir, the second-largest in California. If the erosion advanced quickly uphill, it could undermine the concrete top of the spillway, allowing torrents of water to wash downhill into the Feather River and flood nearby Oroville and other downstream towns. The two main avenues for getting water out of the lake — the unpaved emergency spillway and the main concrete spillway — were both damaged. …
Read more
U.S.Authorities issue dire warnings amid threat of California dam collapse
Mark Abadi,Business Insider UK 13 hours ago 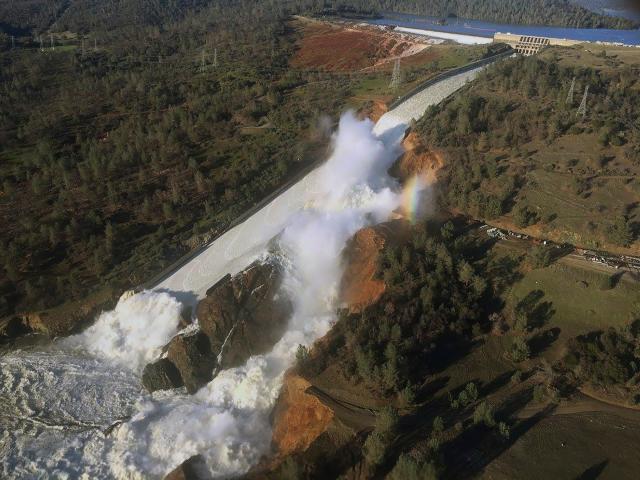 California Department of Water Resources Authorities ordered the evacuation of more than 100,000 residents in several northern California towns Sunday evening, as a rapidly eroding section of a dam appeared on the verge of collapse.”Immediate evacuation from the low levels of Oroville and areas downstream is ordered,” the Butte County sheriff’s office posted on Facebook.  „Operation of the auxiliary spillway has lead to severe erosion that could lead to a failure of the structure. Failure of the auxiliary spillway structure will result in an uncontrolled release of flood waters from Lake Oroville.”The evacuation warning was „NOT a drill,” the sheriff’s office added.Anticipating the failure of the dam’s auxiliary spillway, officials in the northern California town frantically attempted to drain water from the main spillway, at a clip of 100,000 cubic feet per second, according to the Sacramento Bee. Helicopters dropped sand and rocks into a sinkhole in the spillway to stem the erosion.“It’s uncontrolled. It’s uncontrolled,” Department of Water Resources spokesman Chris Orrock said, when asked how much water could be released should the spillway fail.Later Sunday evening, officials said the threat of collapse due to erosion had diminished, according to the Sacramento Bee. Water levels fell to a point at which little or no water flowed out of the emergency spillway, which Orrock said was the main factor in its erosion.An evacuation center was set up in Chico, a nearby town north of Oroville, the sheriff’s office said on Twitter. Traffic heading out of Oroville appeared to slow to a crawl as thousands of residents attempted to flee. Residents of seven towns in neighboring Yuba and Sutter counties were also instructed to evacuate. The number of residents ordered to evacuate totaled 130,000, the Associated Press reported. 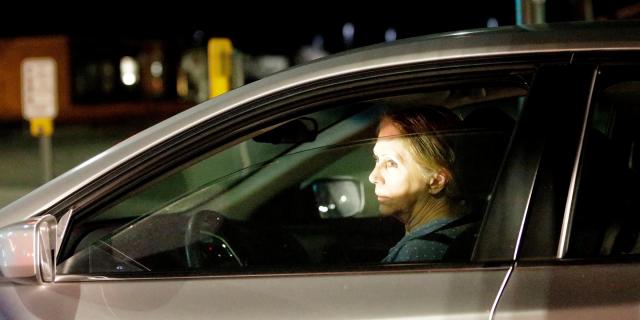 Rich Pedroncelli/APUnexpected erosion this week resulted in a massive sinkhole forming in the dam’s main spillway, a mile-long concrete gutter that controls the flow of excess water. Officials initially shut off the flow of water down the spillway, but heavy rainfall on Saturday caused the dam to overflow for the first time in its 49-year history, according to The Associated Press.The overflow triggered the first-ever use of the dam’s emergency spillway, which itself began showing signs of damage, causing officials to issue the evacuation warnings.The deterioration was severe and rapid. Just four hours before the evacuation warnings, around midday Sunday, another Department of Water Resources spokesman had said he didn’t anticipate the failure of the spillways. The dam itself is structurally sound, the spokesman had added.At 770 feet, Oroville Dam is the tallest dam in the United States. It could take up to $200 million to repair the damaged spillway, according to the Los Angeles Times.
Tweet Embed: https://twitter.com/mims/statuses/830968828184055808 Pic of Oroville Dam. Main dam at right (not damaged), main spillway in center (damaged), emergency spillway at left (imminent collapse) pic.twitter.com/CycNz2Aaix Tweet Embed:
https://twitter.com/mims/statuses/830945593459478529 JUST IN: Authorities order residents in low-lying areas of Oroville, Calif., to evacuate as dam is predicted to failhttps://t.co/2x3ZloKOqw pic.twitter.com/UVXxgiHMWj Tweet Embed:
https://twitter.com/mims/statuses/830948490867990529 Portion of the structure that could potentially fail is the Emergency Spillway at Oroville Dam. (1/3)pic.twitter.com/ZMacKuDCdP