GETTY/GOOGLE French firefighters have evacuated about 10,000 people after the South of France was ravaged by the latest in a string of wind-whipped wildfires.  The latest fires caused devastation in Bormes-les-Mimosas, near Saint Tropez on the French Riviera and in northern Corsica on Tuesday night.A huge wildfire also raged in the forests around Lubéron in the Vaucluse department, and in the Provence-Alpes-Côte d’Azur region in the South of France.The village of Bastidonne, in the Vaucluse region, suffered the worst of the blaze, with approximately 600 hectares of forest consumed by the flames. RELATED ARTICLE

France fires: Is it safe to travel to the south of France?More than 2,000 firefighters and 19 water-bomber aeroplanes have been deployed to tackle the out-of-control flames across Southern France. At least 12 firefighters have been injured, with 15 police officers suffering from smoke inhalation, according to officials.The French Riviera is experiencing an exceptionally hot and dry summer, making it far more susceptible to wildfires. EXPRESS Wildfires have ravaged the French Riviera and Corsica COPERNICUS EMSMap showing where wildfires are most likely to break outActress Joan Collins was forced to flee her Saint Tropez villa as the fire ripped through the luxury holiday resort.The 84-year-old tweeted: “Luckily we were able to evacuate last night, not easy with 11 people in the house! We are all okay.“Thanks everybody for good wishes about our safety in fire, all seems ok although fire still burning started by BBQ.”A local British camper staying in Provence-Alpes-Côte d’Azur told the BBC that tourists were told to remain on the beach because the campsite was no longer safe. Plane helps to battle intense wildfires in Corsica GOOGLE 2,000 firefighters have been deployed to tackle the fires She spoke about seeing planes scooping water from the sea before heading back into a “the pool of smoke”. About 100 people were also evacuated from Mirabeau village in Vaucluse and residents have been forced to flee their homes in northern Corsica.French authorities have closed major roads and railways after a wildfire caused chaos near the glitzy Croix Valmer resort in Saint-Tropez.

World Wildfires force French Riviera evacuations Yahoo News Photo Staff 10 hours ago Wildfires force French Riviera evacuationsFlames and smoke fill the sky above a burning hillside as tourists swim on the beach in Bormes-les-Mimosas, in the Var department, France, July 26, 2017. (Jean-Paul Pelissier/Reuters)French authorities ordered the evacuation of up to 12,000 people around a picturesque hilltop town in the southern Côte d’Azur region as fires hopscotched around the Mediterranean coast for a third day Wednesday.A raging wildfire began late Tuesday in the dry Mediterranean forests around La Londe-les-Maures before being pushed by the mistral winds to Bormes, a tourist magnet with houses clustered on a hill surrounded by dense forests of scrub and trees.The local Var Matin newspaper reported that 12,000 people were forced to take refuge in gymnasiums and other places, including thousands of campers. It said some people sought safety on local beaches. (AP)See more news-related photo galleries and follow us on Yahoo News Photo Twitter and Tumblr.

At least 48 people have been killed as large swaths of western India have been lashed by heavy monsoon rains and flooding over the last week, officials said Wednesday.In Rajasthan, home to a number of popular tourist destinations, the streets of at least four districts have been turned into virtual rivers, trapping tens of thousands of people on the upper floors of residential buildings. Rescue workers were scrambling to rescue thousands of others whose homes have been flooded or destroyed.By Wednesday, the death toll in the state stood at 19.In the neighboring state of Gujarat, at least 29 people have died amid torrential rains.This week’s deaths have taken the toll to 83 since the start of the monsoon season, which runs from June through September.In both states, thousands of army and paramilitary rescue workers have joined local police to rescue thousands of people marooned as a result of the flooding. Military helicopters are also assisting in rescue efforts.At least 60 people have died in northeastern Assam state due to flooding since the start of the monsoon season. Another 14 people died in the nearby state of Arunachal Pradesh last month after a mudslide swept through a village.The deaths have mostly occurred due to drownings, electrocution and house collapses.India’s Meteorological Department forecasts heavy rain over both states for the rest of the week.

An Indian barber sits on a stool waiting for customers inside his shop on a flooded street following monsoon rains in Kolkata, India, Tuesday, July 25, 2017. The monsoon season in India runs from June to September. Bikas Das AP Photo

The death toll from flooding in India climbed to 119 on Wednesday as floodwaters began to recede, officials said.That number includes 25 people, including 17 from one family alone, that were found dead in the Banaskantha district, Gujarat on Wednesday.”In all 25 bodies were fished out from two villages on the bank of Banas river,” assistant superintendent of police Aksharaj Makwana told AFP.In the neighboring state of Rajasthan, the death count rose to 19. The streets continued to look more like canals, as trapped residents huddled on the rooftops of residential buildings awaiting the arrival of rescue workers.Using boats and helicopters, rescue workers continued to take flood victims to safety. They have already evacuated 36,000 people from affected areas.Indian Prime Minister Narendra Modi conducted an aerial survey of the states hardest-hit by monsoon flooding on Tuesday, including Arunachal Pradesh, Assam, Rajasthan, and Gufarat – his home state. He urged resiliance and promised a quick government response.The Indian Meteorological Department predicts more rain for the region for the rest of the week. 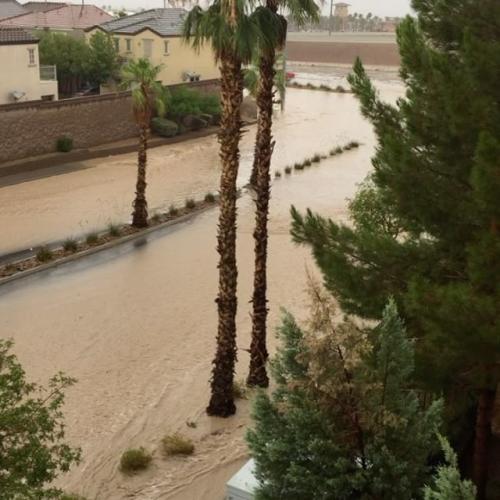 Widespread flash flooding was reported across Las Vegas, Nevada, on Tuesday, July 25. The Las Vegas Review-Journal reported many roadways were under one to two feet of water and some roads were closed.

As of 8 am Tuesday, nearly two inches of rain had fallen across the area. A flash flood warning extended into Tuesday night. Credit: Instagram/leaplion007 via Storyful