© Getty gettyimages-824830466.jpg The chairman of the Senate Foreign Relations Committee said Secretary of Defense Jim Mattis and Secretary of State Rex Tillerson are „very open” to updating the president’s war powers that have been in place and unchanged since after the Sept. 11, 2001 terrorist attacks, after a number of senators met with the two top Trump cabinet members on the topic Wednesday. Sen. Bob Corker, R-Tennessee, said Tillerson and Mattis are open to eliminating the current Authorization of Use of Military Force (AUMF), if a replacement is ready. Congress passed the AUMF in 2001 to give the president broad authority to retaliate against anyone who contributed to the terrorist attacks, but the AUMF has continued to justify military intervention abroad for more than 15 years.”I’m confident that they’ll work with us,” Corker said of Tillerson and Mattis.Sens. Jeff Flake, R-Arizona, and Tim Kaine, D-Virginia, are spearheading a bipartisan push to update the president’s war powers and require congressional approval before the president can take military action. Kaine also told reporters after meeting with Tillerson and Mattis that the two seem open to changing the AUMF, not because they believe they need to legally to intervene abroad, but because they think it would be good to have Congress’ support.Earlier Wednesday, the State Department issued a statement to Corker saying the current AUMF is sufficient.”The United States has sufficient legal authority to prosecute the campaign against al-Qa’ida and associated forces, including against the Islamic State of Iraq and Syria (ISIS),” the State Department said in a letter to Corker. „This legal authority includes the 2001 Authorization for the Use of Military Force (AUMF) which authorizes the use of military force against these groups. Accordingly, the administration is not seeking revisions to the 2001 AUMF or additional authorizations to use force.”Watch: After ISIS, what’s next for Mosul?Democrats in particular — and some Republicans as well — are arguing that Congress never intended the AUMF, passed in the urgent days after Sept. 11, 2001, to authorize the president’s authority the way it is used today, and Congress should have approval before military intervention abroad.Sen. Ben Cardin, D-Maryland, said he was in Congress when it passed the 2001 authorization, said it was never intended to be used to fight ISIS, and told reporters it’s important for Congress to pass a different resolution on how to deal with ISIS so it isn’t an „open-ended” issue.Sen. Tom Udall, D-New Mexico, took to Twitter to offer a similar sentiment.Rep. Barbara Lee, D-California, introduced a proposal in June to repeal the 2001 AUMF, and the proposal passed the House Appropriations Committee. But the proposal went nowhere, and Lee accused House Speaker Paul Ryan, R-Wisconsin, of quietly killing the legislation. 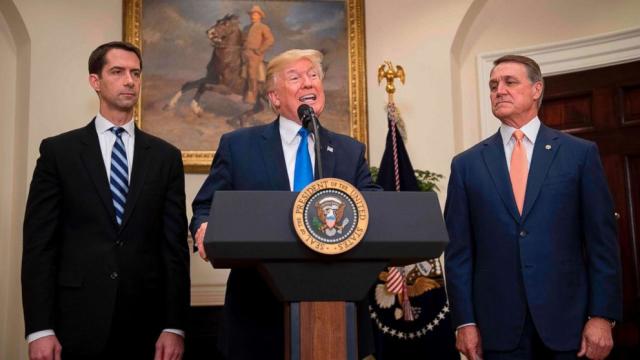 President Trump introduced legislation today with Sens. Tom Cotton, R-Ark., and David Perdue, R-Ga., aimed at cutting legal immigration to the United States.The bill — a revised version of an immigration-reform bill introduced in February — would change the system for granting legal residency, or green cards, by giving priority to high-skilled, English-speaking immigrants.”This competitive application process will favor applicants who can speak English, financially support themselves and their families and demonstrate skills that will contribute to our economy,” Trump said today at the White House alongside Cotton and Perdue.Trump administration allowing up to 15,000 more foreign worker visasPresident Trump signs executive order targeting foreign work visasForeign tech workers in the spotlight thanks to Trump’s latest executive orderTrump, who promised during his election campaign to reform the immigration system, argued that the bill, called the Reforming American Immigration for Strong Employment (RAISE) Act, would replace „our low-skilled [immigration] system with a points-based system.””They’re not going to come in and immediately go and collect welfare,” he said.Under a 1996 welfare reform bill signed by President Clinton, legal immigrants are already barred from receiving government benefits for five years or longer. Some exceptions include children and human trafficking victims who allowed to collect certain benefits.The RAISE Act would establish a point-based system for issuing green cards and would give more points to people who are highly skilled — which, Trump suggested, would reduce the number of immigrants receiving government benefits.”For some people, they may think that’s a symbol of America’s virtue and generosity,” Cotton said of the current immigration system. „I think it’s a symbol we’re not committed to working-class Americans. We need to change that.”Trump, along the same lines, said the new legislation would lead to higher pay for American workers and „help ensure that newcomers to our wonderful country will be assimilated, will succeed and will achieve the American dream.”According to the Department of Homeland Security, 1,051,031 immigrants gained permanent residency in the United States in 2015.It’s unclear when the Senate may take up the new legislation. The initial immigration reform bill was opposed by some Republicans and business groups and has been stalled in the Senate.Sen. Lindsey Graham, R-S.C., has already criticized the measure, saying it would hurt his state’s economy.Some immigration reform advocates also disagree with the idea that the RAISE Act would contribute to better wages.”This bill slashes overall legal immigration by 50 percent — the biggest reductions in a century — which would severely harm the economy and actually depress wages for Americans,” said Todd Schulte, president of FWD.us, an immigration reform advocacy group founded by Facebook CEO Mark Zuckerberg and others in the tech industry.The U.S. Chamber of Commerce also expressed doubt that the RAISE Act would improve the employment landscape.”The goal of moving to a more skills-based immigration system that meets the diverse needs of our economy is a good one and one long championed by the Chamber,” Randy Johnson, senior vice president for labor, immigration, and employee benefits at the U.S. Chamber of Commerce said. „But dramatically reducing overall immigration levels won’t raise the standard of living for Americans. In fact, it will likely accomplish the opposite, making it harder for businesses, communities, and our overall economy to grow, prosper, and create jobs for American workers.”But, other groups that want stricter immigration laws have expressed support for the new legislation. NumbersUSA president Roy Beck said in a statement that the RAISE Act „will do more than any other action to fulfill President Trump’s promises as a candidate to create an immigration system that puts the interests of American workers first.”Sen. Perdue, R-Georgia, also rejected criticism of the proposed legislation. He said he does not believe the RAISE Act would unfairly discriminate against Latino workers, who accounted for 48.3 percent of the foreign-born labor force in 2016 according to the Bureau of Labor Statistics.”I don’t see that that’s well founded at all,” Perdue said. “What this does is let everyone compete individually.”ABC News’ Ben Siegel, Jordyn Phelps and Cecilia Vega contributed to this report.

By Steve Holland and John Walcott,Reuters 4 hours ago 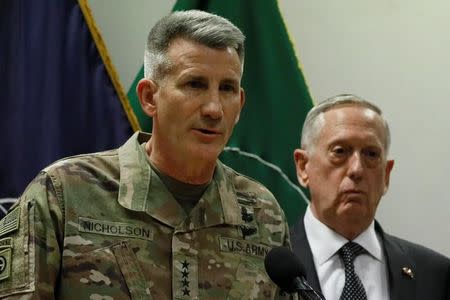 By Steve Holland and John Walcott WASHINGTON (Reuters) – President Donald Trump’s doubts about the war in Afghanistan has led to a delay in completing a new U.S. strategy in South Asia, skepticism that included a suggestion that the U.S. military commander in the region be fired, U.S. officials said on Wednesday.During a July 19 meeting in the White House Situation Room, Trump demanded that his top national security aides provide more information on what one official called „the end-state” in a country that the United States has spent 16 years fighting against the Taliban with no end in sight.The meeting grew stormy when Trump said Defense Secretary James Mattis and Joint Chiefs of Staff Chairman Joseph Dunford, a Marine general, should consider firing Army General John Nicholson, commander of U.S. forces in Afghanistan, for not winning the war.”We aren’t winning,” he told them, according to the officials, who spoke on condition of anonymity.In addition, once the meeting concluded, Trump’s chief strategist, Steve Bannon, got into what one official called „a shouting match” with White House national security adviser H.R. McMaster over the direction of U.S. policy.Some officials left the meeting “stunned” by the president’s vehement complaints that the military was allowing the United States to lose the warMattis, McMaster and other top aides are putting together answers to Trump’s questions in a way to try to get him to approve the strategy, the officials said.Another meeting of top aides is scheduled on Thursday.Although Trump earlier this year gave Mattis the authority to deploy U.S. military forces as he sees fit, in fact the defense secretary’s plans to add around 4,000 more U.S. troops to the 8,400 currently deployed in Afghanistan are being caught up in the delay surrounding the strategy, the officials said.”It’s been contingent all along informally on the strategy being approved,” a senior administration official said of the troop deployment.Trump has long been a skeptic of lingering U.S. involvement in foreign wars and has expressed little interest in deploying military forces without a specific plan on what they will do and for how long.Officials said Trump argued that the United States should demand a share of Afghanistan’s estimated $1 trillion in mineral wealth in exchange for its assistance to the Afghan government.But other officials noted that without securing the entire country, which could take many years, there is no way to get the country’s mineral riches to market, except to Iran. Trump complained that the Chinese are profiting from their mining operations, the officials said.(Editing by Jonathan Oatis)

The Obamas Send Newlywed Couple a Moving Note of Congratulations

A couple invited former President Obama and former first lady Michelle Obama to their wedding and received a lovely response. (Photo: Getty Images,Twitter/96_brooke)Barack and Michelle Obama left the White House almost 200 days ago, but some supporters of the 44th president are still reaching out to him as if he were in office. We’re not talking about policy changes, though he probably gets plenty of letters about that still. It seems many people are still inviting the Obamas to their weddings — and the Obamas are writing back.Twitter user Brooke Allen posted the response her mother, Liz Whitlow, just received after inviting the couple to their wedding in March.“Congratulations on your wedding,” said the signed card that Liz Whitlow and Eddie Edgar received. “We hope that your marriage is blessed with love, laughter, and happiness and that your bond grows stronger with each passing year. This occasion marks the beginning of a lifelong partnership and as you embark on this journey, know you have our very best for the many joys and adventures that lie ahead.”Allen’s tweet has been flooded with replies, many from people sharing photos of their own responses from the Obamas, congratulating them on weddings, new babies, and graduations. Inviting sitting presidents (along with celebrities and cartoon characters) to weddings is a time-honored tradition that’s usually done just to get that declined RSVP as a keepsake.One couple in Manchester, England, sent an invitation to Queen Elizabeth in 2012, and though her office declined, she surprised them by stopping by anyway.Inviting former presidents, however, may be a new thing. In a text that Allen also posted, Whitlow made her political preference in making this gesture known, writing, “I didn’t send one to Trump.”While Obama was in office, it doesn’t seem like he accepted any of these hopeful invitations, though he did crash one wedding at San Diego’s Torrey Pines Golf Course, after he finished the 18th hole. His hobby also led a Hawaii golf course to relocate an Army couple’s wedding to another site on the property for security purposes. When Barack found out, he called the couple to apologize during their ceremony. “Listen, congratulations on your wedding. I feel terrible,” the president told the couple, according to ABC News. “Nobody told us, and had they mentioned they were going to have a wedding on the 16th hole, we would have skipped the 16th hole. But I hope the wedding went OK anyway.”The groom, Capt. Edward Mallue, asked the president if he’d like to attend the reception later. “You don’t want me at the reception,” Obama said in a video posted on ABC News. “Everybody would have to be magged [checked by security]. Congratulations and thank you both for your service.”