Steve Harvey: My Wife Told Me To Skip Meeting With Trump, I Should’ve Listened 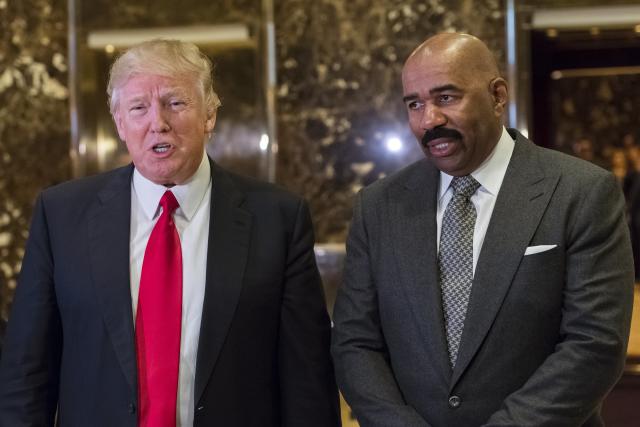 When comedian and TV host Steve Harvey met with President Donald Trump earlier this year, he didn’t expect the degree of outrage he’d receive. Harvey, who recently opened up to The Hollywood Reporter about his career as a comedian and a TV host, spoke about both personal and political experiences over the years and how his meeting with Trump made for one that brings him regrets.“I didn’t see that coming. Jesus,” Harvey told the publication in a new piece published Tuesday. “It was so vicious that it really threw me.”“I was being called names that I’ve never been called: Uncle Tom. A coon. A sellout,” he added. Harvey said he first met with Trump after he said his business partner received “a call from the Obama transition team, who said that the Trump transition team would like to set up a meeting.” He said yes ― but the meeting was also to be held around Harvey’s 60th birthday celebration, which was hosted on a boat. So his wife, Marjorie Harvey, suggested he deliberately miss the meeting. “My wife says, ’Steve, just take off [and skip the meeting]. You’ll meet with him some other time,’” he recalled. “God, I should’ve listened.” Harvey met with the President at the Trump Towers and said he spent about 20 minutes in the January meeting talking about golf. He recalled how he told Trump about potentially working with Ben Carson, whom the president appointed to lead the department of Housing and Urban Development, to help identify ways he could help transform closing schools into “vision centers and teach STEM and computers and coding.”  Harvey said he has since been to HUD twice and that he’s met with Carson. “We’re actually trying to get it started,” he said. “Hopefully before the year goes out, we’ll be making the announcement about the first vision center.” Harvey, who was pictured with Trump immediately following their meeting, drew ire from critics who called out the disrespect and shame they felt in seeing him, a black man, be so willing to work with a man who has consistently neglected and disrespected the black community. Harvey himself released a statement in January as the outrage began to bubble up, explaining then why he met with the President and affirming that “he would sit with Trump anytime.”  A fancy birthday boat ride doesn’t sound half bad, after all. This article originally appeared on HuffPost.Related Video:

Steve Harvey meets with Donald TrumpOn Jan. 13, talk show host Steve Harvey met with President-elect Donald Trump at Trump Tower. Harvey discussed how he and the administration can “team up” to try to bring “some positive change in the inner cities.”Watch news, TV and more Yahoo View, available on iOS and Android. 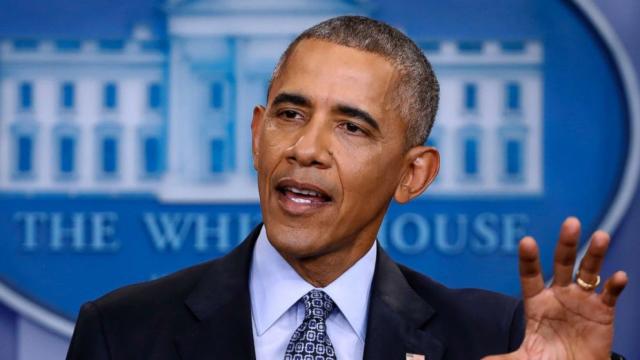 In his statement, Obama did not mention President Donald Trump by name but made clear that he disagrees with the administration’s decision to end DACA, which protects young people who were brought to the United States illegally as children from being deported.

Many expected Obama to issue a response to the decision, since at the final press conference of his presidency, on Jan. 18, he pledged he would speak out about any action taken against Dreamers, as DACA enrollees are sometimes known.

Obama started his statement today by saying that while people can disagree about how to have an immigration system in which „everybody plays by the rules,” that is not what Trump’s decision to end DACA is about.

„This is about young people who grew up in America — kids who study in our schools, young adults who are starting careers, patriots who pledge allegiance to our flag. These Dreamers are Americans in their hearts, in their minds, in every single way but one: on paper,” Obama wrote.

What you need to know about DACA

What we know about the nearly 800,000 undocumented immigrants protected by DACA

He also said that while considering what to do with Dreamers during his presidency, he asked Congress to send him a bill that would help address their future, but „that bill never came.”

„Because it made no sense to expel talented, driven, patriotic young people from the only country they know solely because of the actions of their parents, my administration acted to lift the shadow of deportation from these young people, so that they could continue to contribute to our communities and our country,” he wrote.

„We did so based on the well-established legal principle of prosecutorial discretion, deployed by Democratic and Republican presidents alike, because our immigration enforcement agencies have limited resources and it makes sense to focus those resources on those who come illegally to this country to do us harm,” Obama continued.

„To target these young people is wrong — because they have done nothing wrong. It is self-defeating — because they want to start new businesses, staff our labs, serve in our military and otherwise contribute to the country we love. And it is cruel,” he wrote.

Obama took aim at the decision, which the Trump administration said needed to be made by today because of lawsuits that were set to be filed against DACA.

„Ultimately, this is about basic decency. This is about whether we are a people who kick hopeful young strivers out of America or whether we treat them the way we’d want our own kids to be treated. It’s about who we are as a people — and who we want to be,” he wrote.

During his final news conference before leaving office, Obama cited an attack on DACA as a possible situation „where I think our core values may be at stake.”

Former Vice President Joe Biden was the first member of the Obama administration to speak out after the Sessions announcement, sharing a statement on Twitter earlier today.

„Brought by parents, these children had no choice in coming here. Now they’ll be sent to countries they’ve never known. Cruel. Not America,” Biden wrote.

MOSCOW (AP) — Russia will ask the U.N. Security Council to send peacekeepers to patrol the front line in eastern Ukraine, President Vladimir Putin said Tuesday, a development greeted by Germany as a new opportunity for detente.

Fighting between Ukrainian troops and Russia-backed separatists in the region has killed more than 10,000 people since 2014. A 2015 peace deal brokered by Germany and France helped reduce the scale of fighting, but regular clashes have continued.

The separatists have opposed Ukraine’s suggestion to deploy peacekeepers in the war zone.

Putin told reporters Tuesday that peacekeepers could help ensure safety for international observers who are monitoring the cease-fire.

But he insisted the peacekeepers should be deployed only along the line separating the rebel-controlled territories and the area under government control where the clashes occur. Russia’s foreign ministry will file a formal request with the U.N. Security Council, Putin said.

German Foreign Minister Sigmar Gabriel said he found Putin’s announcement „surprising” but said he was „very glad … the Russian president said today he will continue to negotiate about demands that were rejected in the past by Russia.”

„More importantly, this offer of a U.N. mission in eastern Ukraine shows that Russia has effected a change in its policies that we should not gamble away,” he told reporters on the sideline of parliament in Berlin.

„It would be good if we take it as an opening to talk about new ways of detente.”

Russia’s U.N. ambassador, Vassily Nebenzia, said in New York that he has sent a draft resolution to the council president and to Secretary-General Antonio Guterres and hopes to circulate it in the near future to all council members.

He told the council the U.N. peacekeepers would provide security for the observer mission from the Organization for Security and Cooperation in Europe. „This would progress a solution of the problem in southeastern Ukraine,” Nebenzia said.

Ukraine’s envoy to the United Nations, Volodymyr Yelchenko, told the Security Council that Ukraine’s president made a similar proposal to deploy U.N. peacekeepers in March 2015.

„We consider that such deployment could greatly contribute to the restoration of peace and security in the east of Ukraine” which was undermined by Russia’s „aggression” and support for separatists in the region.

Yelchenko said the mandate of a U.N. peacekeeping mission „should be carefully drafted and our delegation is ready to take an active part in its consideration” as soon as council members return from a visit to Ethiopia. The council is expected to be back at work in New York on Monday.

The Ukrainian president’s envoy for peace in the east, Iryna Gerashchenko, however, said earlier Tuesday that Ukraine would agree to a deployment of the peacekeepers only in the separatist-held territories, not on the contact line.

The „Normandy Format” peace talks between Ukraine, Russia, Germany and France have largely stalled of late, with a truce timed to the start of the new school year breaking down almost immediately after it was agreed upon at the end of August.

Associated Press writers Kirsten Grieshaber and David Rising in Berlin and Edith M. Lederer at the United Nations contributed to this report.

South Korea has responded to Sunday’s nuclear test by North Korea with a huge show of military force and moves to boost its ability to counter missile attacks from its neighbour. The army and air force drills, held at an undisclosed location on Monday morning, involved launching ballistic missiles in a simulated strike against North Korea’s Punggye-ri nuclear test site – the scene of Sunday’s controlled detonation of what Pyongyang claimed was a powerful hydrogen bomb capable of being loaded on to an intercontinental ballistic missile.Source: South Korea Defense Ministry HandoMonday 4 September 2017 08.00 BSTLast modified on Tuesday 5 September 2017 08.11 BST ia Pacific

Sept. 5 (UPI) — North Korea’s sixth nuclear test may have involved a 108-kiloton bomb, according to a team of Chinese scientists.But Japan’s defense ministry said the bomb could have unleashed as much as 120 kilotons.The wide-ranging estimates follow an assessment from the research group Norwegian Seismic Array that pointed out large test explosions could be accomplished in a number of ways, according to The New York Times.A team of Chinese researchers at the University of Science and Technology of China in Hefei, Anhui province, said the most recent test took place Sunday at North Korea’s Punggye-ri test site, and their data had a margin of error of no more than 100 meters.The impact of the explosion risks „major environmental disaster,” said Wang Naiyan, the former chairman of the China Nuclear Society.Another test could cause the mountain at Punggye-ri to collapse, the South China Morning Post reported.”We call it ‘taking the roof off.’ If the mountain collapses and the hole is exposed, it will let out many bad things,” the scientist said.It is unclear, however, whether the North Koreans built vertical or horizontal tunnels.Vertical tunnels are more expensive but would mitigate damage, according to Wang.”A 100-kiloton bomb is a relatively large bomb. The North Korean government should stop the tests as they pose a huge threat not only to North Korea but to other countries, especially China,” Wang said.In Tokyo on Tuesday, Japanese Defense Minister Itsunori Onodera said the bomb could have emitted as much energy as 120 kilotons of TNT, NHK reported.The Japanese official also said the artificial quake resulting from the test measured 6.0 on the Richter scale.Onodera did not rule out the possibility of a hydrogen bomb test, and said investigation is ongoing.Nuclear experts said the explosion on Sunday was four to 16 times more powerful than Hiroshima, and North Korea may be in the process of developing a hydrogen bomb. Related UPI Stories