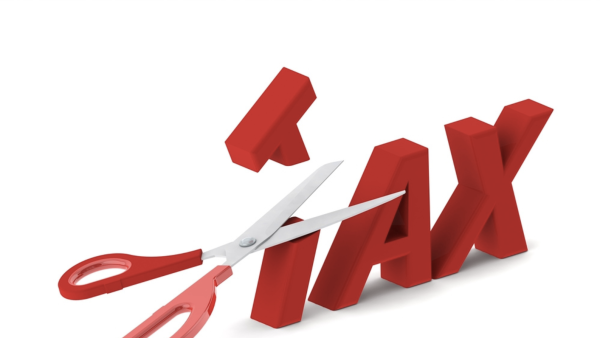 Scroll back up to restore default view.In the distorted logic of Washington, D.C., a new deal to keep the government open, and solvent, into December could endanger Republicans’ plans for tax reform — a top priority for President Donald Trump.Bear with us as we unpack the tedious details. Trump made a deal with Democrats to fund the government and extend the U.S. borrowing limit into December, averting what could have been a nerve-wracking showdown at the end of this month. That might seem reasonable, especially since it allows Congress to quickly approve spending to help the victims of Hurricane Harvey, with no horse-trading to get in the way.But the temporary deal also sets the stage for another giant fight over spending priorities at the end of the year, a point at which Republicans who control Congress hoped those battles would reside firmly in the past. In that sense, Trump’s deal with Democrats only postpones a big budget fight, with the timing now threatening to disrupt tax legislation at a crucial time in Congress’s calendar.“Tax reform just got tougher,” Greg Valliere of Horizon Investments wrote in a recent note to clients. “The idea of enacting a tax cut by year-end, always far-fetched, is dead.” Do markets care? Not yet. In fact, stocks rose slightly on news of Trump’s compromise deal to keep the government running for a few additional months. But a rally in stocks this year is probably due at least in part on hopes for corporate tax cuts at some point. If that doesn’t happen, payback is likely.Republican Congressional leaders wanted to pass longer-term spending bills this month, and extend the government’s borrowing limit for at least 18 months, clearing the rest of the year for other matters, principally tax reform. The longer debt-ceiling extension would also have swept the matter under the table prior to the 2018 midterms, leaving one less distasteful vote for conservatives to take and their constituents to criticize.What the three-month extension means for the GOP Funding the government and approving more borrowed money are two issues that tie Republicans in knots, since the most conservative GOPers want to slash government spending, no matter what the cost. They’re willing to shut down the government and risk a default on U.S. debt if it gives them the leverage they can use to demand sharper spending cuts. But shutdowns are deeply unpopular with most voters, and defaulting on U.S. debt would be an economic calamity, with the blame falling squarely on Republicans. That’s why party leaders generally pay lip service to spending cuts while passing traditional spending bills anyway and then finding something else to talk about.The temporary extensions mean Republicans will have to keep talking about their conflicted approach to spending, giving Democrats more opportunities to attack. Republicans will probably also need Democratic votes to pass the next debt-ceiling extension, in December, since some hard-core conservatives may vote against it. That gives Dems more leverage over the Republican tax plan, whatever it turns out to be. The result could be more modest cuts for corporations and perhaps no cuts for the wealthy, with the middle class benefiting more. Or, it could simply lead to gridlock, with Republicans refusing to offer what Democrats demand.The temporary extensions also mean Republicans will be trying to cut taxes at the same time they have to approve more federal borrowing. That’s inherently contradictory: why cut taxes if the government already has to borrow because it doesn’t take in enough tax revenue? Voters might not care, but the paradox will strengthen the hand of fiscal conservatives who think it’s reckless to cut taxes when the government is already $19 trillion in debt. And arguably, it is.Congress has a limited window for tax cuts. Research firm Strategas believes the timing has now slipped to late in the first quarter of 2018, or the second quarter. “The must-pass items which needed to be cleared out before pivoting towards tax reform (i.e., the debt ceiling) have not been resolved,” the firm said in a note to clients. If nothing’s done by mid 2018, the whole effort could get shelved. As the 2018 midterms come into view, members of Congress will become increasingly reluctant to agree to deals that include any compromise political foes can use against them in a campaign. Members facing tough primaries in conservative states or districts may not vote for any compromise since it could put them on record supporting spending increases voters won’t like. That makes gridlock more likely.Trump is beginning a heavy push on tax reform, giving speeches around the country and taking a more active role than he did with the doomed effort to repeal Obamacare this past summer. The U.S. Chamber of Commerce, a powerful pro-business lobbying group, will start running ads explaining why tax reform is necessary. Other interest groups will ramp up promotional efforts for whatever part of tax reform is likely to benefit them. So the pressure on Congress to pass some kind of tax-reform package will intensify. But countervailing pressures to do nothing will grow stronger, too. In Washington, there may be no end to hurricane season. 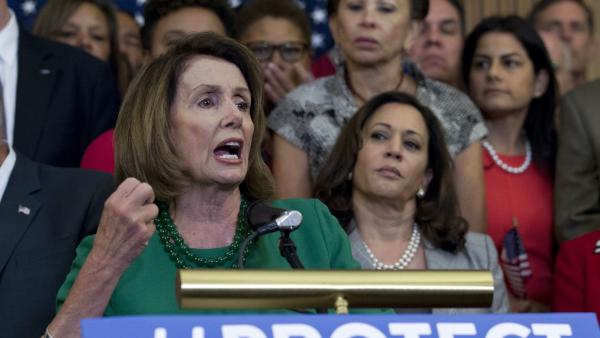 Scroll back up to restore default view. WASHINGTON — House Minority Leader Nancy Pelosi, D-Calif., said Thursday that she believed President Trump would sign a DREAM Act legalizing young unauthorized immigrants after her meeting with him Wednesday.“The president both yesterday in the meeting and today made it very clear he wants Congress to act, to get this done,” Pelosi told reporters.Related SearchesDonald Trump DACATrump Decision On DACAPelosi added that Trump wants border security measures attached to any bill focused on the immigrants, but that “it does not include a wall.”The Democratic House leader brushed off the suggestion that she and Trump are seeing a relationship “renaissance” and will cooperate more in the future, but said she does hold out hope Congress will pass something to protect the nearly 800,000 young people who will lose their temporary legal status next year.“I’m hoping and I’m praying — and I don’t say that as [a] cliché, I am praying — that the president really cares about the DREAMers,” she said. “Or knows that he should care about the DREAMers.”Asked about Pelosi’s comments, White House spokeswoman Sarah Sanders said only that Trump wants to work with both Democrats and Republicans on the immigration issue.“The president Is focused on responsible immigration reform and wants to work with both sides to achieve it,” Sanders told Yahoo News.The conciliatory tone came a day after Trump sided with Pelosi and Senate Minority Leader Chuck Schumer, D-N.Y., instead of Republicans in a deal to fund the government and raise the debt ceiling. The president is also meeting with Schumer and New York and New Jersey politicians later Thursday to talk about a major tunnel project between the two states.Republicans are fuming about Trump’s decision to side with the Democrats, after a summer of the president’s insulting many Republican senators by name.

View photosPresident Trump meets with, from left, Senate Majority Leader Mitch McConnell, R-Ky., Senate Minority Leader Chuck Schumer, D-N.Y., and House Minority Leader Nancy Pelosi, D-Calif., and other congressional leaders on Sept. 6. (Photo: Evan Vucci/AP)But Pelosi said Republicans simply didn’t have the votes to lift the debt ceiling for more than the three months the Democrats were willing to agree to. “Here the currency of the realm is the vote. You have the votes, no questions asked,” she said. “You don’t have the votes? Three months.”Trump called Pelosi Thursday morning, and the Democrat asked him to reassure young unauthorized immigrants spooked by his decision to revoke the Deferred Action for Childhood Arrivals program.After the pair talked by phone, Trump tweeted shortly before 10 a.m. that DACA recipients had “nothing to worry about” during the next six months. Pelosi said she was in the middle of recounting her conservation with the president to other Democratic lawmakers when “boom, boom — the tweet appeared.”Related slideshow:  Immigrants and advocates rally in support of DACA >>>The president’s decision earlier this week to end the DACA program, which protects nearly 800,000 young unauthorized immigrants without criminal records, will not begin to take effect for half a year. At that point, recipients will begin to lose their status on a rolling basis and become eligible for deportation. They will also no longer be allowed to legally work.But immigrants eligible for DACA who don’t have it already can now no longer apply, and those whose status is set to expire within the next six months must quickly apply for a renewal before Oct. 5.Trump’s attorney general, Jeff Sessions, announced the decision as a return to the  “rule of law” and suggested that the immigrants, who were brought to the country as children, were taking jobs away from other Americans.Trump has asked Congress to pass something that helps those affected, though he has not said whether he believes a bill should provide DACA recipients with a path toward citizenship or a lesser form of legal status.Additional reporting by Hunter Walker.