US warns N.Korea will be ‘destroyed’ if threats continue 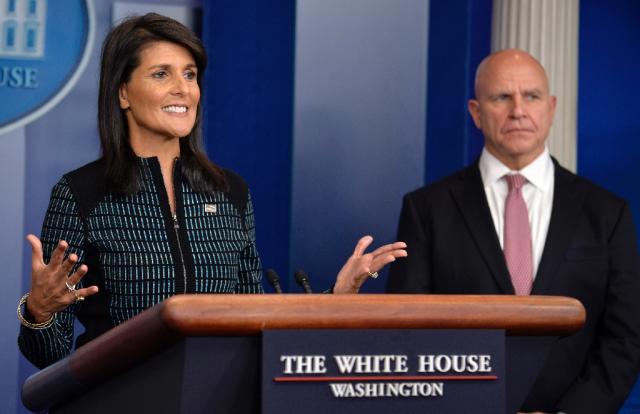 Washington (AFP) – Donald Trump’s administration ramped up the pressure on North Korea on Sunday ahead of a week of high-stakes diplomacy at the United Nations, warning Pyongyang will be „destroyed” if it refuses to end its „reckless” nuclear and ballistic missile drive.With US officials and their allies scrambling to find ways to contain an increasingly belligerent Pyongyang, the US president will address the UN General Assembly on Tuesday and then confer Thursday with his Japanese and South Korean counterparts on the sidelines of the meeting.Trump and South Korean President Moon Jae-In spoke by phone Saturday night and pledged „stronger pressure” on Kim Jong-Un’s regime, the South’s presidential office said, adding that the North must be made to realize that „further provocation” would put it on a „path of collapse.”The Security Council last Monday imposed a new raft of sanctions on North Korea — but their impact depends largely on whether China, Pyongyang’s ally and main economic partner, will fully implement them and on Russia, which is hosting tens of thousands of North Korean workers.Washington’s ambassador to the United Nations, Nikki Haley, kept up the rhetorical pressure ahead of the upcoming meetings in New York, asserting that if the North should pose a serious threat to the US or its allies, „North Korea will be destroyed.”Trump’s earlier warning he would rain „fire and fury” on a recalcitrant North Korea, she said, was „not an empty threat.””None of us want war,” Haley added in an interview on CNN. „We wanted to be responsible and go to all diplomatic means to get their attention first. If that doesn’t work, General Mattis” — the US defense secretary — „will take care of it.”- Enforcement in focus -As the US and its allies emphasize the diplomatic track, South Korea is also deploying a state-of-the-art US missile defense system. In their latest call, the White House said Trump and Moon had committed to „take steps to strengthen deterrence and defense capabilities” of South Korea, offering no details of how it might do so.Analysts say that in the event of hostilities, millions of people in the Seoul area — as well as the 30,000 US troops in South Korea — would be vulnerable to attack by the thousands of artillery pieces the North has positioned near the border, with potentially staggering casualties.So far, every effort to persuade the North to back away from its fast-developing nuclear and missile programs — including its most powerful nuclear test yet, on September 3 — has proved futile, at times even seeming to prompt new acts of defiance from Pyongyang.The North’s latest show of resistance came when it launched a long-range missile over Japan on Friday, just four days after the UN Security Council had passed a tough new package of sanctions.At the request of the United States, the Security Council will hold a ministerial-level meeting Thursday on ways to enforce the latest sanctions, which include an export ban on textiles, freezing work permits to North Korean guest workers and capping oil supplies.- ‘Rocket Man’ -Haley said sanctions had already provided a „punch in the gut” to Pyongyang but that strict enforcement was crucial.Separately, Trump’s national security advisor, H.R. McMaster, agreed that „the critical thing is going to be to get all countries, every one, to do all they can to enforce those sanctions, to do everything they can, short of a military conflict, to resolve this problem.”But if diplomacy and economic pressure fail, he added, „We have to prepare all options.”Pyongyang, an insular country with few outside contacts, says it needs nuclear weapons to protect itself from „hostile” US forces and is determined to build the capacity to deliver a nuclear warhead that could hit the US mainland.North Korea said Saturday it was bent on nothing less than military „equilibrium” with the United States.As his administration continued its efforts to rein in the North, Trump himself gave a more unbridled account of his latest diplomatic contacts.”I spoke with President Moon of South Korea last night. Asked him how Rocket Man is doing. Long gas lines forming in North Korea. Too bad!” Trump tweeted, apparently finding a new nickname for Kim (McMaster confirmed that that was probably Trump’s intention).Whether there are gas lines is unclear; very few people own cars in North Korea, outside military and government officials.

By Doina Chiacu,Reuters 11 hours ago 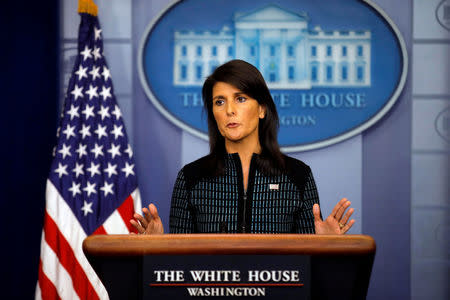 By Doina Chiacu WASHINGTON (Reuters) – U.S. Ambassador to the United Nations Nikki Haley said on Sunday the U.N. Security Council has run out of options on containing North Korea’s nuclear program and the United States may have to turn the matter over to the Pentagon.”We have pretty much exhausted all the things that we can do at the Security Council at this point,” Haley told CNN’s „State of the Union,” adding that she was perfectly happy to hand the North Korea problem over to Defense Secretary James Mattis.As world leaders head to the United Nations headquarters in New York for the annual General Assembly meeting this week, Haley’s comments indicated the United States was not backing down from its threat of military action against North Korea.North Korea launched a missile over Japan into the Pacific Ocean on Thursday in defiance of new U.N. Security Council sanctions banning its textile exports and capping imports of crude oil.For more news videos visit Yahoo View, available on iOS and Android.China has urged the United States to refrain from making threats to North Korea. Asked about President Donald Trump’s warning last month that the North Korean threat to the United States will be met with „fire and fury,” Haley said, „It was not an empty threat.””If North Korea keeps on with this reckless behavior, if the United States has to defend itself or defend its allies in any way, North Korea will be destroyed. And we all know that. And none of us want that. None of us want war,” she said on CNN.”We’re trying every other possibility that we have, but there’s a whole lot of military options on the table,” she said.Pyongyang has launched dozens of missiles as it accelerates a weapons program designed to provide the ability to target the United States with a powerful, nuclear-tipped missile.North Korea said on Saturday it aimed to reach an „equilibrium” of military force with the United States.‘ROCKET MAN’ Trump plans to meet with South Korean President Jae-in Moon on the sidelines of the U.N. General Assembly.”I spoke with President Moon of South Korea last night. Asked him how Rocket Man is doing. Long gas lines forming in North Korea. Too bad!” Trump said in a Twitter post on Sunday morning.White House national security adviser H.R. McMaster said on Friday, after the latest North Korean missile launch, that the United States was running out of patience: „We’ve been kicking the can down the road, and we’re out of road.”On Sunday, he warned of imminent danger from Pyongyang.”This regime is so close now to threatening the United States and others with a nuclear weapon, that we really have to move with a great sense of urgency on sanctions, on diplomacy and preparing, if necessary, a military option,” McMaster told the „Fox News Sunday” program.Military options available to Trump range from a sea blockade aimed at enforcing sanctions to cruise missile strikes on nuclear and missile facilities to a broader campaign aimed at overthrowing leader Kim Jong Un.Mattis has warned the consequences of any military action would be “tragic on an unbelievable scale” and bring severe risk to U.S. ally South Korea.Democratic U.S. Senator Dianne Feinstein said on Sunday that Trump should not rule out talks with North Korea before it agrees to end its nuclear program.”I think that North Korea is not going to give up its program with nothing on the table,” she said on CNN.Feinstein said that a freeze of both its nuclear program and missile arsenal, rather than ending them, would be more palatable to North Korea and to China, who fears the U.S. goal is toppling Kim.The United States still wants a peaceful solution and has been waiting for the North Koreans to indicate they are ready to talk, Secretary of State Rex Tillerson said on CBS’ „Face the Nation.””We have tried a couple of times to signal to them that we’re ready, when they’re ready,” he said. „And they have responded with more missile launches and a nuclear test.”(Editing by Jeffrey Benkoe)

2017 Emmy Awards Arrivals Yahoo Style Staff 4 hours ago Nicole Kidman in Calvin Klein Nicole Kidman, nominated for Best Actress in a Limited Series for her role in Big Little Lies, wore red to walk the red carpet. Her tea-length Calvin Klein dress featured a deep V-neck, which highlighted the large diamonds hanging from her neck. (Photo: Reuters)The red carpet at the 69th Primetime Emmy Awards on Sunday night brought together stars of the small screen at the Microsoft Theater in Los Angeles. From the all-star ensemble casts of Stranger Things and This Is Us to comedic stars like Julia Louis-Dreyfus, Aziz Ansari, Tracee Ellis Ross, and Alec Baldwin, the best in the business walked the red carpet on Sunday night. Click through above for every attendee.Check out more Emmy Awards coverage from Yahoo Lifestyle.Follow us on Instagram, Facebook, and Twitter for nonstop inspiration delivered fresh to your feed, every day.