View photosHurricane Maria is shown in the Atlantic Ocean about 85 miles east of Martinique in this NASA handout satellite photo – REUTERSHurricane Maria strengthened to an „extremely dangerous” category five hurricane on Monday night as it battered Dominica and barrelled towards several Caribbean islandsThe storm was moving along roughly the same path as Hurricane Irma, which devastated several islands and parts of Florida earlier this month.Watch live: Track path of Hurricane Maria Maria, with winds of up to 160mph, made landfall on the Caribbean island of Dominica late on Monday evening.A series of Facebook posts by Dominica Prime Minister Roosevelt Skerrit captured the fury of the storm as it made landfall on the mountainous island.”The winds are merciless! We shall survive by the grace of God,” Skerrit wrote at the start of a series of increasingly harrowing posts.A few minutes later, he messaged he could hear the sound of galvanized steel roofs tearing off houses on the small rugged island.

He then wrote that he thought his home had been damaged. And three words: „Rough! Rough! Rough!”A half hour later, he said: „My roof is gone. I am at the complete mercy of the hurricane. House is flooding.” Seven minutes later he posted that he had been rescued.Hurricane warnings were issued for the British Virgin Islands, Guadeloupe, Dominica, St Kitts and Nevis, Montserrat, Martinique and St Lucia – all of which are still recovering from Irma.At least 37 people were killed by Hurricane Irma, which caused billions of pounds of damage. Sir Richard Branson’s private Necker island, part of the British Virgin Islands, was destroyed.

View photos The location and possible route of Hurricane Maria Credit: National Hurricane CentreThe US National Hurricane Center said the storm would likely intensify over the next 24 hours or longer, noting its eye had shrunk to a compact 10 miles across and warning: „Maria is developing the dreaded pinhole eye.”That generally means an extremely strong hurricane will get even mightier, said Brian McNoldy, a hurricane researcher at the University of Miami. He said it just like when a spinning ice skater brings in their arms and rotates faster.”You just don’t see those in weaker hurricanes,” he said.Forecasters said „potentially life-threatening” storm surges could raise water levels by six to nine feet near the storm’s centre. The storm was predicted to bring 10 to 15 inches of rain across the islands, with more in isolated areas.

View photos US Army soldiers wait on a beach for a Navy landing craft as their unit evacuates St Thomas in  the US Virgin Islands in advance of Hurricane Maria Credit: JONATHAN DRAKE/ReutersThe French Caribbean island of Guadeloupe – the bridgehead for aid for Irma-hit French territories – ordered all at-risk zones to be evacuated.If it keeps on the same trajectory, Maria would directly strike Puerto Rico on Wednesday.”This storm promises to be catastrophic for our island,” said Ernesto Morales with the US National Weather Service in San Juan.

View photos US soldiers secure a portable tent as they break down a field hospital while preparing to evacuate their unit in advance of Hurricane Maria Credit: JONATHAN DRAKE/ReutersU.S. Virgin Islands Governor Kenneth Mapp warned residents not to underestimate the threat from Maria, or its potential to change track. „Just remember this is a live animal,” he said.The island of St. Croix appeared to be in the path of hurricane-force force winds, with nearby St. Thomas and St. John seeing tropical storm-force winds, Mapp said, adding, „given the current conditions of St. Thomas and St. John, that’s not good.”At a glance | Caribbean hurricanesForecasters also were tracking Category 1 Hurricane Jose, packing 75-mph (120-kph) winds and located about 250 miles (405 km) east of North Carolina, and stirring dangerous surf and rip currents to much of the U.S. Eastern seaboard.6:09AM ‘Everything collapsed’-Anthony Astapha, a lawyer based in Dominica, has told Antigua’s Observer Media Group that the wind was “savage”.”We lost the roof. My total upstairs, the ceiling and everything collapsed. I have two inches of water downstairs.”My god, I can only feel the pain of those who don’t have the house that I have. It was terrible and I just hope people didn’t die.”5:35AM US Virgin Islands braces for impact US Virgin Islands Governor Kenneth Mapp says Maria is due to pass late Tuesday night or early Wednesday within 10 miles of the island of St. Croix, which escaped the brunt of Irma’s Category 5 clout.Mapp warned that hurricane-force winds were expected to howl across St. Croix for eight hours, accompanied by up to a foot and a half (46 cm) of rain that would be followed by nearly a week of additional showers. 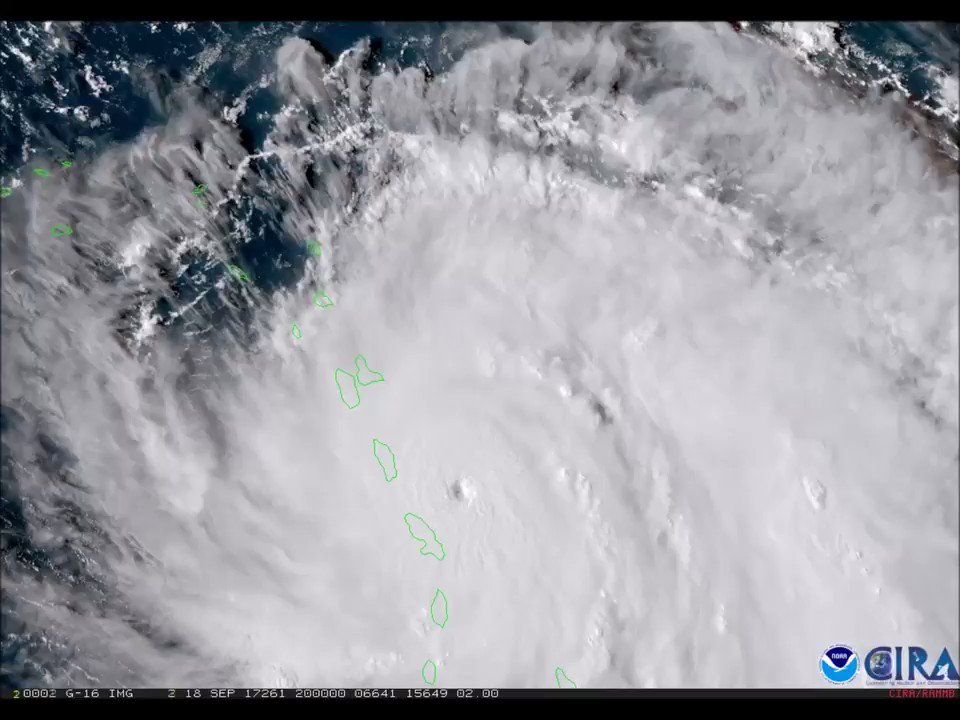 NOAA Satellites PA @NOAASatellitePAUPDATE: NOAA’s #GOES16 captured this animation of Cat. 5 #HurricaneMaria, just as it made its 9:15 p.m. AST landfall on #Dominica.5:13 AM – Sep 19, 2017At an evening news conference, he predicted most islanders would be without electricity for weeks, and that „some folks will not get power in months.” A curfew will be imposed starting at 10 a.m. local time on Tuesday, he said.Mapp asked the public for prayers and urged St. Croix residents take cover in one of three emergency shelters on the island. For those choosing to stay in their homes during the storm, he said, they might consider climbing into a second-floor bathtub and pulling a mattress over them to stay safe in the event they lose their roofs.Forecasts predict Maria will be the worst storm to hit St. Croix since Hugo, a Category 4 storm, in 1989.5:15AM‘The dreaded pinhole eye’The U.S. National Hurricane Centre says the storm will likely intensify over the next 24 hours or longer, noting its eye had shrunk to a compact 10 miles across and warning: „Maria is developing the dreaded pinhole eye.”That generally means an extremely strong hurricane will get even mightier, said Brian McNoldy, a hurricane researcher at the University of Miami. He said it just like when a spinning ice skater brings in their arms and rotates faster.”You just don’t see those in weaker hurricanes,” he said. 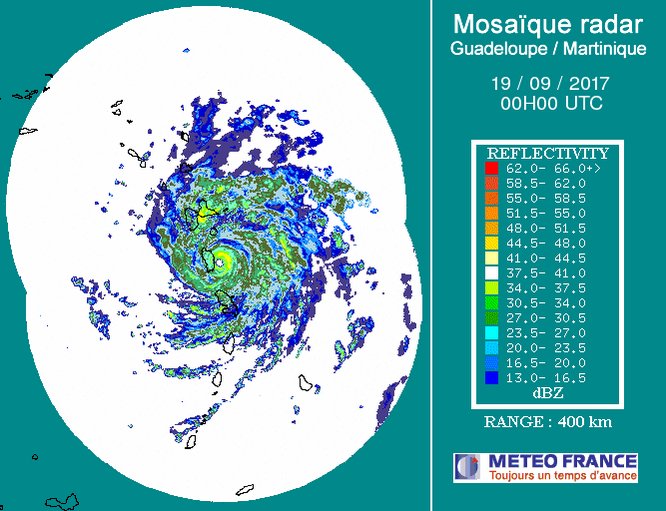 Mike Hamernik @MikeHamernik#Dominica‘s 4000-foot mountains have chewed up #Maria‘s pinhole eye. Sadly, Maria is doing the same to Dominica. Radar from Martinique.5:41 AM – Sep 19, 2017 4:43AM Too early to assess casualties A police official, Inspector Pellam Jno Baptiste, says there are no immediate reports of casualties but it is still too dangerous for officers to do a full assessment as the storm rages.”Where we are, we can’t move,” he said in a brief phone interview, AP reports.Dominica authorities have closed schools and government offices and urged people to move from dangerous areas to shelters. 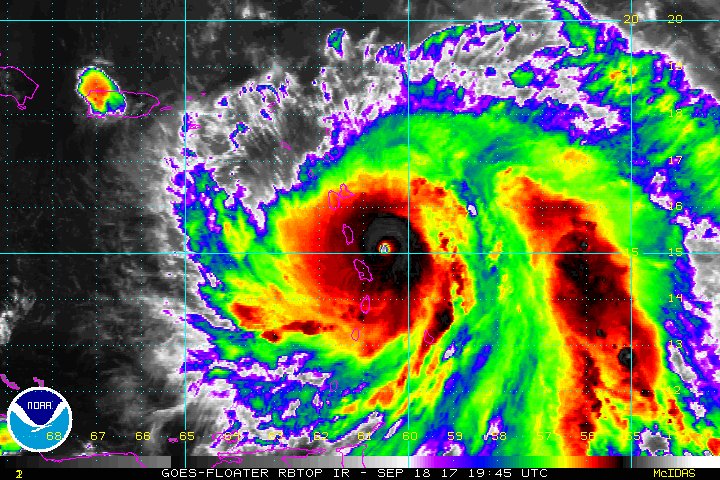 NHC Atlantic Ops @NHC_Atlantic#Maria made landfall on Dominica at 915 pm AST as a category 5 #hurricane with 160 mph (260 km/h) winds http://www.nhc.noaa.gov/archive/2017/al15/al152017.update.09190132.shtml …?6:23 AM – Sep 19, 20174:37AM ‘Dominica has been devastated’The Prime Minister of Dominica Roosevelt Skerrit has told teleSUR the island has been „devastated” by Hurricane Maria. „Please let the world know Dominica has been devastated. We do not know how many are dead if any. We shall know in the morning. The hurricane is still on. We were brutalized by the hurricane.”4:18AM Latest update on hurricaneThe eye of Category 5 hurricane Maria is moving over the Caribbean island of Dominica and is expected to approach the Virgin Islands and Puerto Rico by Tuesday night and Wednesday, the U.S. National Hurricane Center said on Monday.”Maria is moving toward the west-northwest near 9 miles per hour (15 km/h), and this general motion is expected to continue through Wednesday,” the Miami-based weather forecaster said. View image on Twitter 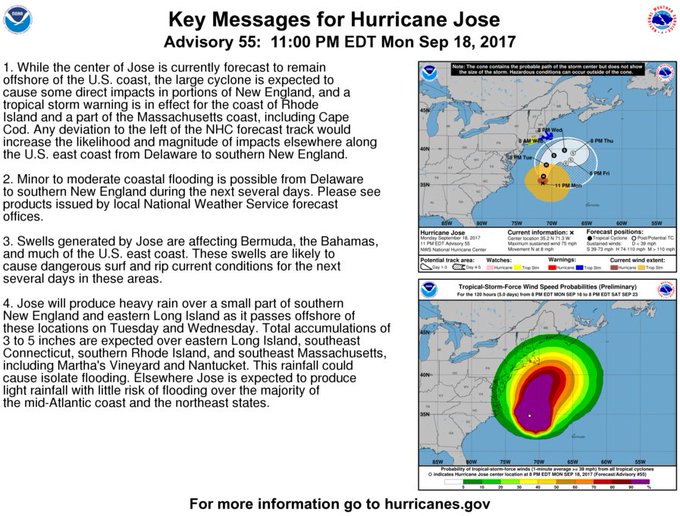 NHC Atlantic Ops @NHC_Atlantic 9/18 11 pm: Here are the key messages for #Jose for Advisory 55 http://hurricanes.gov  6:13 AM – Sep 19, 20174:05AM‘My roof is gone!’Dominica Prime Minister Roosevelt Skerrit says he has been rescued after his roof was blown off.In a series of Facebook posts, he described the sound of galvanized steel roofs tearing off houses on the small rugged island.2:40AMHurricane Maria makes landfall on Dominica The National Hurricane Center in Miami says the eye wall of Category 5 Maria is moving onshore over Dominica.

People board up windows of a business in preparation for the anticipated arrival of Hurricane Maria in San Juan, Puerto Rico Credit: AFP2:06AM Sir Richard Branson: from Irma to MariaThe British billionaire businessman, whose Necker Island home was destroyed by Irma has written a blog about the dangers now posed by Maria. he states:These hurricanes are causing unimaginable destruction; in the BVI infrastructure has collapsed, but we are working hard with some incredible partners, from the Royal Marines to aid agencies, the Puerto Rican authorities to the local BVIslanders, to help get the islands back on their feet.My thoughts are turning to working with others to help create a long-term Marshall Plan for the BVI, and for the Caribbean to reconstructed and rejuvenated with clean energy and new jobs. However, as they prepare for another hurricane, the BVI’s people need the world’s attention now.Read Sir Richard’s blog here.

View photos Sir Richard surveys Irma damage1:20AMHurricane Maria strengthens to Category Five Hurricane Maria has strengthened into a Category 5 storm with top winds of 160 mph. The Foreign and Commonwealth Office has advised against travelling to Anguilla, the British Virgin Islands and Montserrat – with hurricane warnings in place for the latter two.

View photosBoats remain anchored in a wharf as Hurricane Maria approaches in Guadeloupe island Credit: Reuters12:51AM US senator urges airlines to cap fares for people fleeing stormTen leading US airlines have been urged to cap airline fares for people fleeing Hurricane Maria, David Millward reports.Bill Nelson, a Democrat senator from Florida, has written to the airlines’ chief executives, asking them to prevent fares spiralling as the hurricane approaches.Fares soared in the days leading up to Hurricane Irma as it bore down on the Caribbean, Florida, Georgia and South Carolina.Flights, which would normally have cost only a few hundred dollars, went on sale for several thousand dollars as aircraft filled up.Airlines were accused of price gouging, with several members of Congress calling on Elaine Chao, the US transportation secretary, to hold an investigation.