Striking a pose – Trump make his United Nations debut President Donald Trump speaks during the “Reforming the United Nations: Management, Security, and Development” meeting during the United Nations General Assembly, Monday, Sept. 18, 2017, in New York. From left, UN Secretary General Antonio Guterres, Trump, UN Ambassador Nicky Haley, White House chief of staff John Kelly, and National Security Adviser H.R. McMaster. (Photo: Evan Vucci/AP)President Donald Trump made his debut at the United Nations taking his complaints about the world body straight to the source.In his first appearance as president, Trump on Monday addressed a U.S.-sponsored event on reforming the 193-member organization he has sharply criticized.As a candidate for president, Trump labeled the U.N. as weak and incompetent, and not a friend of either the United States or Israel. But he has softened his tone since taking office, telling ambassadors from U.N. Security Council member countries at a White House meeting this year that the U.N. has “tremendous potential.”Trump more recently has praised a pair of unanimous council votes to tighten sanctions on North Korea over its continued nuclear weapon and ballistic missile tests.Trump’s big moment comes Tuesday, when he delivers his first address to a session of the U.N. General Assembly. The annual gathering of world leaders will open amid serious concerns about Trump’s priorities, including his policy of “America First,” his support for the U.N. and a series of global crises. It will be the first time world leaders will be in the same room and able to take the measure of Trump. (AP)_See more news-related photo galleries and follow us on Yahoo News Photo Twitter and Tumblr. 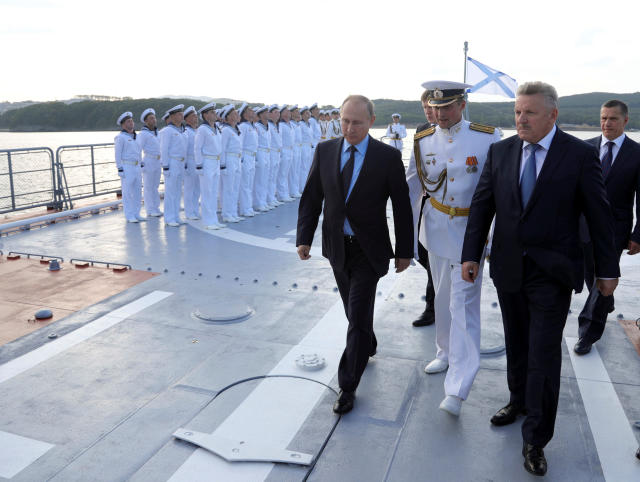 As Manhattan locks down and world leaders fly in to attend President Donald Trump’s first U.N. General Assembly in office, Vladimir Putin tops the absentee list.Instead, the Russian president will observe the start of the main part of a war game his military is conducting along NATO’s eastern border, the Kremlin told state news agencyItar-Tass Monday.The Russian president will not make the trip to New York City this year, after delivering a polarizing speech from the U.N. podium when he last attended the annual session in 2015, in which he blamed Western leaders for the rise of extremism and hinted at Russia’s soon-to-be-announced foray into Syria.Trending: Polls Show Why Trump Flip Flopped on DreamersIn a now-infamous side twist of his 2015 trip, CBS broadcast an interview with Putin on 60 Minutes back-to-back with a segment featuring Trump. The fact that the pair were on the program in the same episode prompted Trump to boast that he had gotten to know his “stablemate” Putin “very well” on the show.The odd claim was rendered meaningless by the fact that the pair gave their interviews on different days and countries apart.Putin’s spokesman Dmitry Peskov confirmed at the start of the month that Putin would not be going to the U.N. General Assembly, stating that the trip was “not in the president’s plans.” Not for the first time, Putin is sending Foreign Minister Sergei Lavrov to lead the Russian delegations. On Monday, the Kremlin revealed Putin’s actual plans for the day, announcing that while Russian diplomats take their seats, Putin will be in the command room for Russia’s Zapad drill, near St. Petersburg.The drill, held jointly with Russia’s westernmost military ally Belarus, has unnerved NATO allies for months, some of whom have compared it to a simulated assault, an annexationor a bid to place troops near NATO and not pull them back.Don’t miss: Is Trump Worse Than Racist Alabama Governor George Wallace?Before Putin’s arrival in the Luzhskiy training range, Su-24M front fencer bombers practiced hitting targets there Monday. The Kremlin did not say what sort of training activity Putin would personally oversee in the Leningrad region.Putin’s decision to stay away from the General Assembly is not out of character, as he keeps his U.N. visits rare, though his trips to the West have dried up from his calendar exponentially in recent years, says Roderic Lyne, former U.K. ambassador to Russia.“Putin is traveling much less now than in his earlier years, and has made few visits to the West since the annexation of Crimea. It’s not comfortable territory for him—especially the U.S.A. in the wake of the latest sanctions and diplomatic spats.”“I think this is an understandable and expected decision,” says Lilia Shevtsova, associate fellow at Chatham House’s Russia and Eurasia program. It is not so much that Putin is making a point with his absence, she says, but rather, he may be absent because he has no point to make.Most popular: How Israel Should Battle Hezbollah’s Campaign of Perception“In order to take part in the 72nd Session of the General Assembly, Putin has to deliver some message,” she says. “But what could his message be now? It looks like Moscow has not decided on whether to adopt a more confrontational approach to the West and the U.S. or a softer line.”Russian government officials have repeatedly tried to blame the continuing deterioration in relations with the U.S. at lawmakers and figures besides Trump. However, as the current administration has increased punitive actions on Russia without a push from Congress, Putin and his Prime Minister Dmitry Medvedev have criticized U.S. Secretary of State Rex Tillerson and Trump himself.If the agenda at the U.N. is dominated by Trump’s program to trim spending on the U.N. and reform the body, Russia has little to contribute.According to Shevtsova, the Kremlin’s ambivalence on Trump extends to Russia’s „lack of readiness” to make a contribution to the leading topic going into the summit—U.N. reform. Thus, she says, “Putin prefers to watch the developments from Moscow.”

Tanks drive down the Champs-Élysées during the Bastille Day parade in Paris. (Photo: Markus Schreiber/AP)President Trump announced Monday that he wants to showcase America’s military power with an Independence Day parade of martial assets down Pennsylvania Avenue, inspired by the two-hour display he witnessed in Paris on Bastille Day.“We’re actually thinking about Fourth of July, Pennsylvania Avenue, having a really great parade to show our military strength,” Trump said as he met with French President Emmanuel Macron on the sidelines of the U.N. General Assembly. Trump said he was discussing such an event with White House chief of staff John Kelly, and added: “We’ll see if we can do it this year, but we certainly will be beginning to do that.”In Paris on July 14, Trump had watched raptly for two hours as French and American troops marched past a VIP reviewing stand on the city’s fabled Champs-Élysées avenue. Armored personnel carriers, tanks and missile launchers had rumbled past while scores of military jets and helicopters roared through the sky.“It was one of the greatest parades I’ve ever seen,” Trump said Monday. “It was military might, and I think a tremendous thing for France, for the spirit of France, and people don’t know what great warriors they are in France.”

President Trump and French President Emmanuel Macron attend the traditional Bastille Day military parade in Paris. (Photo: Michel Euler/AP)Trump continued, “And to a large extent, because of what I witnessed, we may do something like that on July 4 in Washington down Pennsylvania Avenue,” where the White House is located.“We’re going to have to try and top it. But we had a lot of planes going over, and we had a lot of military might and it was really a beautiful thing to see. They had representatives from different wars in different uniforms. It was really so well done,” the president said.“We’re spending this year 700 billion, more than we’ve ever spent, on the military, which is good news for you ’cause we’re friends,” Trump told Macron. “And I think we really, we’re looking forward to doing that.”Trump spent this July 4 hosting military families at the White House.

NATO: Russia exercise resembles „preparation for a big war”NEAR ST. PETERSBURG, Russia — A NATO military leader has raised new concern about Russia’s massive military exercise underway on the very borders of Eastern Europe. The head of NATO’s military committee says the war games could be seen as „a serious preparation for a big war,” despite Russian assurances they pose no threat. With volunteers and U.S. tanks, Estonia tells Russia it’s „ready to fight” Russia decries „threat” as U.S. troops roll into Poland Gen. Petr Pavel, head of NATO’s Military Committee, said over the weekend that NATO was working to re-establish military-to-military communications with Russia, to try to avoid any „unintended consequences of potential incidents during the exercise.”