Nina Godlewski International Business TimesSeptember 26, 2017 Less than one week after Hurricane Maria devastated Puerto Rico, the National Oceanic and Atmospheric Administration has aerial data on the destruction caused by the storm. As it has for the two hurricanes that came before Maria, NOAA has collected photos from the sky of areas that were hit hard in order to aid in the assessment and recovery processes.Maria made landfall on Wednesday and left much of the territory destroyed and without power after it passed over the island. The storm was a Category 4 when it hit, the strongest storm in the last 85 years to hit. The damage was significant and a lack of resources and power made traveling to rescue people or assess the extent of it all was difficult. Early photos of the damage showed collapsed structures, flooded roadways and down power lines.The damage can also be seen on an interactive map created by NOAA in the wake of the storm. The photos were taken by NOAA’s Remote Sensing Division with the goal of assessing the impacts of natural disasters and to help create preparedness plans in the future. The data on the map as of Monday was taken during five different flights from Sept 22 to 24.

View photospuerto rico aerial mapThis map from NOAA shows the damage the storm caused. Photo: NOAAComparisons of the aerial images taken after the storm to baseline records of the same areas allow response agencies to check whether necessary infrastructure is damaged and how extensive that damage is. This helps response organizations determine how best to restore key navigation routes if necessary. The images were collected by remote-sensing on board camera on NOAA craft. The King Air 350 was primarily used for this round and flew at a height of 1,500 to 5,000 feet.The images currently used to make the map show damage at the Fernando Luis Ribas Dominicci Airport, the smaller airport on the island had some visible damage to it the photos showed.

View photosFernando Luis Ribas Dominicci AirportThe Fernando Luis Ribas Dominicci Airport in San Juan as pictures from an airplane after Hurricane Maria. Photo: NOAAThe land behind the Institute of Neurobiology has visible debris scattered about it. This too was visible in the photos taken from the air. The Institute is near old San Juan and the Castillo San Felipe del Morro, a 16th century citadel and popular tourist attraction.

View photosinstitute of neurobiology san juanThe Institute of Neurobiology is pictured here after Hurricane Maria. Debris can be seen in the grass nearby. Photo: NOAAOther buildings in the city just blocks from Old San Juan had visible damage to the roofs.

View photosroof damage san juanThis aerial image of San Juan shows the roofs of buildings that were damaged during Hurricane Maria. Photo: NOAAThe aerial images mostly cover the Northern Coast of the island as well as the Eastern Coast and the Arecibo Observatory inland toward the West. The damage is expected to take months if not years for the territory to recover from. The governor of Puerto Rico said the island still needs more help from the United States and the mayor of San Juan said she knows that officials won’t be able to rescue everyone stuck in their homes in time to keep them alive, reported the Washington Post.

C.paton,Newsweek 16 hours ago Archaeologists believe they have found the key to unlocking a mystery almost as old as the Great Pyramid itself: Who built the structure and how were they able to transport two-ton blocks of stone to the ancient wonder more than 4,500 years ago?Over the years, researchers posited a number of competing theories as to how the pharaohs engineered the monumental structure, which remained the tallest on earth well into the middle ages.Read More: Secret room discovered in Great Pyramid by archaeologists armed with lasersTrending: When Will Hurricane Maria Affect North Carolina? Island Visitors Ordered to Evacuate As Storm ApproachesExperts had long established that the stones from the pyramid’s chambers were transported from as far away as Luxor, more than 500 miles to the south of Giza, the location of the Great Pyramid, but had never agreed how they got there.However, the diary of an overseer, uncovered in the seaport of Wadi al-Jafr, appears to answer the age-old question, showing the ancient Egyptians harnessed the power of the Nile to transport the giant blocks of stone. 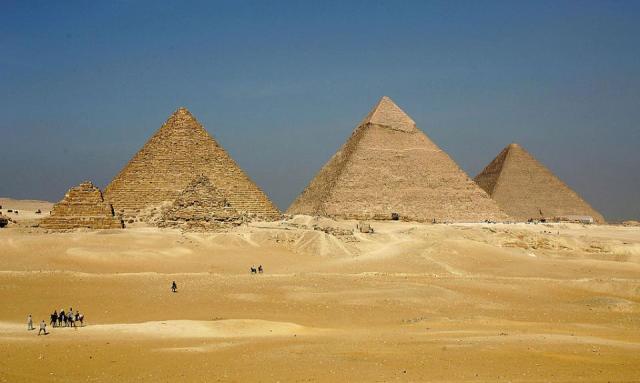 The three large pyramids of Menkaure (L), Khafre (C) and Khufu loom over the horizon November 13, 2004 at Giza, just outside Cairo, Egypt. The three large pyramids at Giza, built by King Khufu over a 30-year period around 2,550 B.C., are among Egypt’s biggest tourist attractions. (Photo by Sean Gallup/Getty Images)Don’t miss: Neil deGrasse Tyson on ‘Game of Thrones’: Astrophysicist Explains ‘GoT’ Science in Twitter LessonAccording to a new British documentary Egypt’s Great Pyramid: The New Evidence, which aired on the U.K.’s Channel 4 on Sunday, the Great Pyramid, also known as the Pyramid of Khufu, was built using an intricate system of waterways which allowed thousands of workers to pull the massive stones, floated on boats, into place with ropes.Along with the papyrus diary of the overseer, known as Merer, the archaeologists uncovered a ceremonial boat and a system of waterworks. The ancient text described how Merer’s team dug huge canals to channel the water of the Nile to the pyramid.Archaeologist Mark Lehner, who has devoted his career to uncovering who built the pyramids, explained how his team had uncovered a waterway hidden beneath the Giza plateau. It is believed that the stones which went into the pyramid were delivered to this area.Most popular: Donald Trump’s Bullying Tactics Are Backfiring SpectacularlyThe experts also made new discoveries about boat building in the bronze age civilization. By restoring the wooden planks from the ceremonial boat and then scanning them with a 3D laser, they archeologists could discern how they were first assembled.A separate team of archaeologists is currently working to make an internal map of the Great Pyramid at Giza using laser technology. The group, from the ScanPyramids project, has announced the discovery of a series of voids in the pyramid which they believe may be hidden rooms.