Mental health concerns in aftermath of Puerto Rico hurricaneSAN JUAN, Puerto Rico (AP) — Locked out of his home and with nowhere else to go, Wilfredo Ortiz Marrero rode out Hurricane Maria inside a Jeep, which was lifted off its wheels by floodwaters in the parking lot. He then endured days without enough food or running water.The lights are back on at his residence for low-income elderly people in the San Juan suburb of Trujillo Alta, and food has started arriving, but he still waits as long as he can each night to leave the company of others in the lobby. Alone in his room, he sometimes starts to shake.”You get really depressed,” he said Wednesday.The hurricane that pummeled Puerto Rico two weeks ago and the scarcity-marked aftermath are taking a toll on islanders’ equilibrium. The U.S. territory’s government counted two suicides among the death toll, which now stands at 34, and with many communities still waiting for power and clean water, there is concern about others reaching a breaking point.Students and staff at Ponce Health Sciences University are visiting shelters and people in the hardest-hit communities to provide psychological help, among other services, said Alex Ruiz, special assistant to the university’s president.”People’s whole worlds were taken from them,” he said. „People will need the proper psychological help to get through this.”At a news conference on Wednesday, Gov. Ricardo Rossello said the death toll jumped to 34 from 16 on the basis of a report that he commissioned to consult with hospitals and gain a more complete picture of the number of victims. He said 20 deaths resulted directly from the storm, including drownings and those killed in mudslides.The count also includes sick and elderly who died in the aftermath of the hurricane, including some who died because oxygen could not be delivered amid power outages. There were also two suicides, but Rossello did not provide details of those.One elderly woman took her own life Sunday inside a nursing home in Rio Piedras, a San Juan suburb. While the facility’s director, Maria Betancourt, said she didn’t believe the woman was distressed about the storm, the home was stifling hot on Wednesday after power was wiped out nearly a month ago when Hurricane Irma sideswiped the island on Sept. 7, though a generator has kept the lights on. Outside the home there were piles of garbage and fallen tree limbs piled on the side of the road.Ortiz and other residents of the low-income housing residence in Trujillo Alta said the building administration ordered them to leave ahead of Hurricane Maria, saying the building wasn’t equipped to weather the storm. Some were picked up by family, but Ortiz had no relatives to come get him and had no choice but to stay in his Jeep until the storm subsided and a chain on the building’s door was removed.Another resident, Felix Manuel Lopez, a 73-year-old U.S. Army veteran, said he has seen a Veterans Affairs counselor to help with anxiety that came back after he returned from a shelter to his darkened apartment.”Everybody’s drained,” said Ruiz, the Ponce university official, who recently toured the city on the island’s southern coast to assess people’s needs. „Spirits have been broken.”On Wednesday, the governor said power has been restored to 8.6 percent of Puerto Rico’s customers and the government is hoping to have power back on for 25 percent within a month. Power is being restored at hospitals, and he said the government is looking into which schools can reopen.”While we are still in an emergency we are transitioning to establishing some components of normalcy,” Rossello said.Dr. Olga Rodriguez, the dean of the Ponce Health Science University’s school of medicine, said mental health problems have increased after the hurricane and need to be dealt with swiftly.”This is very important so as to minimize the impact and emotional effects,” she said. „It’s not easy. We’re reaching some people, but the island needs more mental health professionals. If we don’t act, the situation can become problematic.””People are unable to go to work, they cannot produce, they do not know when they can return to work,” she said. „There’s widespread despair.”_Coto reported from San Juan.

Another Hurricane May Hit the U.S. on Sunday

Photo credit: The National Hurricane Center.From Country Living Hurricane season 2017 isn’t over yet. Just as the people of Florida were recovering from the aftermath of Hurricane Irma, a new storm has begun to approach the Gulf Coast, The National Hurricane Center (NHC) announced Wednesday.The NHC is the division of the United States’ National Weather Service that is responsible for tracking storms and predicting weather systems. They issued their first public advisoryat around 2 p.m. Eastern time Wednesday. The government agency said Tropical Depression Sixteen was moving northwest toward Nicaragua and could potentially turn into a tropical storm by Wednesday night. If the system were to form into a tropical storm it would be called Tropical Storm Nate.”It is too early to specify the timing or magnitude of these impacts,” the NHC said on Twitter. „Residents along the Gulf Coast from Louisiana to Florida should monitor the progress of this system for the next several days and heed any advice given by local officials.” 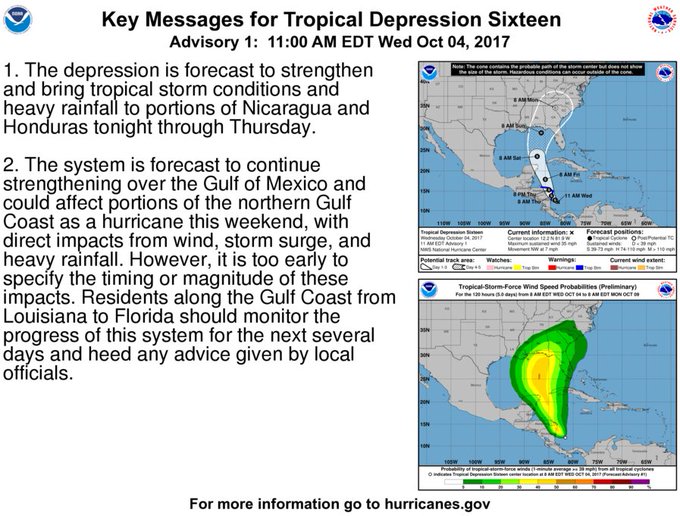 Parts of the U.S. that are expected to be directly impacted by Sunday afternoon are New Orleans, Mobile, Alabama, and Pensacola, Apalachicola, and Tampa, Florida, the Washington Post reports. „We could quickly have a powerful hurricane on our hands,” AccuWeather meteorologist Dan Kottlowski told USA Today.Rainfall of about 15 to 20 inches are expected across portions of Nicaragua, according to the NHC. The severe rainfall could cause life-threatening flash-floods and mudslides. If you’d like to keep track of the storm, WNYC has created a tool to help track Depression 16 as it forms into Tropical Storm Nate.

System growing off Central America could hit US as hurricane

Associated PressOctober 5, 2017 MEXICO CITY (AP) — A tropical depression developing off the coast of Nicaragua is expected to dump heavy rains on parts of Central America before strengthening into a hurricane that could touch Mexico and eventually reach the U.S. mainland, forecasters and officials said.Mexico’s government issued a hurricane watch from Punta Herrero to Cabo Catoche in the state of Quintana Roo with the storm expected to reach the resort-dotted stretch of coast late Friday, according to the U.S. National Hurricane Center.The long-term forecast showed the storm reaching the U.S. Gulf coast as a hurricane by Sunday.The tropical depression had maximum sustained winds of 35 mph (55 kph) and was located about 95 miles (155 kilometers) south-southeast of Puerto Cabezas, Nicaragua late Wednesday night. It was moving northwest at 6 mph (9 kph), the hurricane center said.The center said 15 to 20 inches (38 to 50 centimeters) of rain were expected across parts of Nicaragua, with strong and possibly dangerous rains also likely in Honduras, Costa Rica and Panama. The storm was projected to cross into the northwestern Caribbean Sea on Friday.

By Daniel Bases ReutersOctober 5, 2017 Puerto Rico benchmark bond drops to record low after Trump remark By Daniel Bases NEW YORK (Reuters) – Puerto Rico’s benchmark general obligation bonds fell on Wednesday, hitting a record low, after U.S. President Donald Trump suggested late on Tuesday that the island’s massive debt load will have to be wiped out because of devastation caused by Hurricane Maria.Related SearchesTrump Puerto Rico CommentsTrump Visits Puerto RicoTrump Tweets On Puerto RicoThe bond due in July 2035, the island’s most recent benchmark debt issue, dropped by 6.5 cents to 37.5 cents on the dollar in late trade on Wednesday. Trading volumes surged to $183 million, nearly three times the combined volume of the prior nine days of activity. The price fell as low as 30.25 cents on the dollar at the start of the day.The bonds are in default and behave more like an equity as no change in yield accompanies their price movements. They carry a coupon of 8 percent.Early on Wednesday, White House Budget Director Mick Mulvaney backed away from Trump’s comments. The president was referring to Puerto Rico’s need to fix its own debt issues through its oversight board, Mulvaney said in an interview on CNN.”I wouldn’t take it word for word,” Mulvaney said of Trump’s comments. He later added in an interview on Fox Business Network: „So, I don’t think you saw any indication there of a federal involvement in the bond situation in Puerto Rico.”The U.S. House of Representatives Committee on Natural Resources said it will work to identify red tape and other bureaucratic hurdles to speed up Puerto Rico’s recovery and rebuilding.Puerto Rico in May filed a form of bankruptcy under the federal 2016 rescue law known as PROMESA. The island’s capital structure has 18 public agencies owing a combined $120 billion in bond and pension debt.”They owe a lot of money to your friends on Wall Street and we’re going to have to wipe that out,” Trump said in an interview with Fox News late on Tuesday after he toured the island.The 2035 bond has tumbled by more than 25 cents on the dollar since Hurricane Maria devastated the U.S. territory last month.The storm knocked out power to the island’s 3.4 million residents, devastating the already dilapidated electric power infrastructure. The Puerto Rico Electric Power Authority (PREPA) declared bankruptcy under PROMESA in July.Restoring the grid after the worst storm to hit in nine decades would be a monumental task even for a well-run utility. It will be much harder for the chronically underfunded PREPA, with its mounting maintenance problems, years-long battles with creditors, a shrinking workforce and frequent management turnover.”We are going to get the electric going again. You know, that was a complete wipeout,” Trump told Fox.The Federal Emergency Management Agency’s latest briefing said it is still providing fuel to hospital generators, delivered over 5 million meals and over 5 million liters of water.Mobile phone services are still limited. The Federal Communications Commission reported 86.3 percent of cellphone sites are still out of service, a slight improvement from Tuesday.PROMESA Last year, in a rare show of bipartisanship, the U.S. Congress passed the PROMESA law that created the Financial Oversight and Management Board to help the island negotiate with creditors.The law also created a mechanism known as Title III that allowed U.S. territories such as Puerto Rico to enter a form of bankruptcy, a financial tool the island did not have access to previously.”The status of the bonds that you heard the president mention this morning are actually inside the bounds of the PROMESA proceedings right now,” Mulvaney said.”So those bonds are being dealt with, were being dealt with before the storm, will be dealt with after the storm through the PROMESA process,” he added.For the firms that insure some, but not all, of Puerto Rico’s various debt issues, the prospect of more federal money could lessen the amount of money they pay out, say analysts at BTIG Research.The losses on Wednesday for shares of AMBAC Financial Group, Assured Guaranty, and MBIA „should be viewed as a buying opportunity,” BTIG said in a research note.Puerto Rico’s governor, Ricardo Rossello, said in a news briefing that he was concerned with actions, not words, and with getting Puerto Ricans what they need.”As far as the comment made about wiping the debt clean, that is the opinion of the president,” Rossello said, adding he could not comment because of the Title III judicial proceedings.Rossello, in a late interview with CNBC, addressed bondholders, saying, „We are all one right now.” He added that the island needed to go to the U.S. Congress and „ask for a real aid package,” in order to help get out of the emergency phase and start rebuilding the island.”That is better for all of the bondholders, all the stakeholders, and all the people of Puerto Rico,” Rossello said.(Reporting By Dan Burns and Daniel Bases; Additional reporting by Eric Beech, Roberta Rampton, Susan Heavey and Doina Chiacu in Washington, and Stephanie Kelly in New York; Editing by Meredith Mazzilli and Jonathan Oatis)