President Trump and Sen. Bob Corker, R-Tenn. (Photos: Manuel Balce Ceneta/AP, Erik Schelzig/AP)President Trump lashed out at Sen. Bob Corker, R-Tenn., on Sunday, days after the outgoing GOP lawmaker suggested that Secretary of State Rex Tillerson, Secretary of Defense James Mattis and White House chief of staff John Kelly are all that separates “our country from chaos.”“Senator Bob Corker ‘begged’ me to endorse him for re-election in Tennessee,” Trump tweeted early Sunday. “I said ‘NO’ and he dropped out (said he could not win without my endorsement). He also wanted to be Secretary of State, I said ‘NO THANKS.’ He is also largely responsible for the horrendous Iran Deal!” Follow

Donald J. Trump @realDonaldTrump Senator Bob Corker „begged” me to endorse him for re-election in Tennessee. I said „NO” and he dropped out (said he could not win without…4:59 PM – Oct 8, 2017 Corker, the chairman of the Senate Foreign Relations Committee, believes the nuclear agreement forged by the Obama administration is badly flawed but does not want to tear it up and risk losing America’s European allies.“Hence, I would fully expect Corker to be a negative voice and stand in the way of our great agenda,” Trump added. “Didn’t have the guts to run!”Corker, who recently announced he won’t seek reelection next year, fired back.“It’s a shame the White House has become an adult day care center,” Corker tweeted. “Someone obviously missed their shift this morning.”Follow

Senator Bob Corker@SenBobCorkerIt’s a shame the White House has become an adult day care center. Someone obviously missed their shift this morning.6:13 PM – Oct 8, 2017“Bob Corker gave us the Iran Deal, & that’s about it,” Trump tweeted later Sunday. “We need HealthCare, we need Tax Cuts/Reform, we need people that can get the job done!”

Charles Robinson,Yahoo Sports 3 hours ago NFL players continue to kneel during the national anthem. President Donald Trump continues to tweet about it. And now Vice President Mike Pence has been injected in the mix, staging a walkout of Sunday’s game between the Indianapolis Colts and San Francisco 49ers after players protested during “The Star-Spangled Banner.”Caught in between it all, a handful of team executives told Yahoo Sports their front offices are becoming weary of the cyclical back-and-forth driven by the involvement of Trump’s administration.“Right now, we have to have two meetings every Saturday,” one NFC executive told Yahoo Sports. “One with the [player] leadership group, and then another with [the owner] to talk about what we expect on game day. That’s a couple hours, but it’s something that ends up on your mind every day, [because] you can’t go more than two days without the president saying something. Every day it’s like ‘OK, what did he say today?’ … We’ve tried to shut that out. But football energy is definitely going into it every week, on something that’s completely outside of the job you’re supposed to be doing.”On Sunday, a second NFC executive expressed exasperation at Pence’s staged walkout of the Colts-49ers game, saying it illustrated the difficult spot that front offices have been placed in this season.It’s “so tiring at this point,” the executive said. “The [government is] jumping into it. Say [our owner] wants to invite someone like Pence or even Trump to our game. I don’t even know how to have that talk. You can’t say ‘no,’ you know what I’m saying? But, of course, it’s going to cause all kinds of distractions. … We [in the front office] have no say. It’s making it an impossible distraction for everyone involved.” 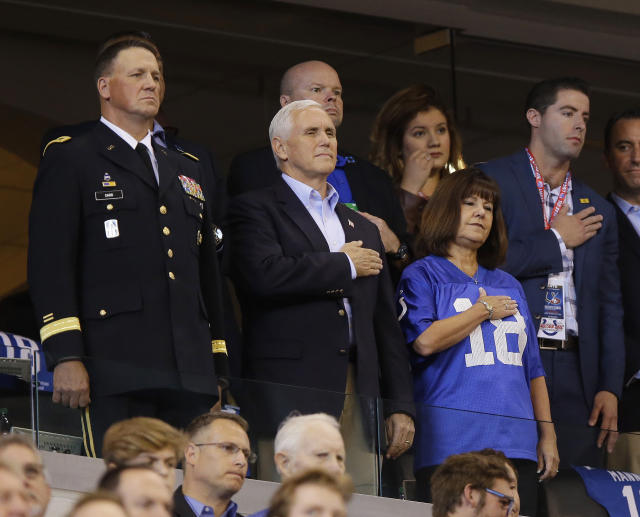 Vice President Mike Pence (front center) stands during the playing of the national anthem before the Colts-49ers game on Sunday. (AP)As the executive pointed out, Pence’s appearance at the game on Sunday presented a whole new wrinkle to the political sideshow that has developed around protesting players. That’s partly because it marks the most aggressive tactic yet by the Trump administration to become part of the debate around protesting NFL players – moving from the social-media feeds to showing up at a stadium.But this was also unique in that it was strategically planned out in part by Trump himself, who quickly tweeted after Pence walked out of Sunday’s game that, “I asked Pence to leave [the] stadium if any players kneeled, disrespecting our country. I am proud of him and [his wife] Karen.”In effect, Trump and Pence used an NFL game to stage a protest of their own – one in which the vice president and his wife actively demonstrated against players who were exercising their own right to free speech. Predictably, it worked to great effect, with Pence tweeting photos of himself and his wife standing for the anthem from the vice presidential Twitter account. Those pictures lit up social media and eventually provoked a response from NFL players – including some of the 49ers players who took a knee.“This looks like a PR stunt to me,” San Francisco safety Eric Reid said. “He knew we had the most players protest. He knew that we were probably going to do it again. … And so, this is what systemic oppression looks like. A man with power comes to the game, tweets a couple things out and leaves the game, with an attempt to thwart our efforts.”After Trump tweeted that he told Pence to leave the game if players protested, Los Angeles Rams offensive tackle Russell Okung retweeted it with the message, “Ultimate PR stunt. Try again.”None of this had anything to do with the game, mind you. That seems to be what is dragging on the front offices of some teams – that more and more of the 2017 NFL season is becoming a referendum on race, politics, free speech, patriotism and TV ratings. And in their own way, team owners are fueling it in a manner that has nothing to do with general managers or personnel directors or coaching staffs. In the process, a vital part of the mechanism that is tasked with building winning football teams is now managing things that have nothing to do with that effort.In Dallas, parts of the coaching staff were caught by surprise when Cowboys owner Jerry Jones admitted publicly he was still communicating with Trump about protests – a fact that hasn’t been favorably received by a few players, according to a team source. In Detroit, Lions owner Martha Ford asked players not to kneel for the national anthem in exchange for her donating money to community causes. The Lions’ front office and coaching staffs had no part in brokering that deal, despite the fact it would almost certainly impact the locker room environment going forward, a league source told Yahoo Sports. 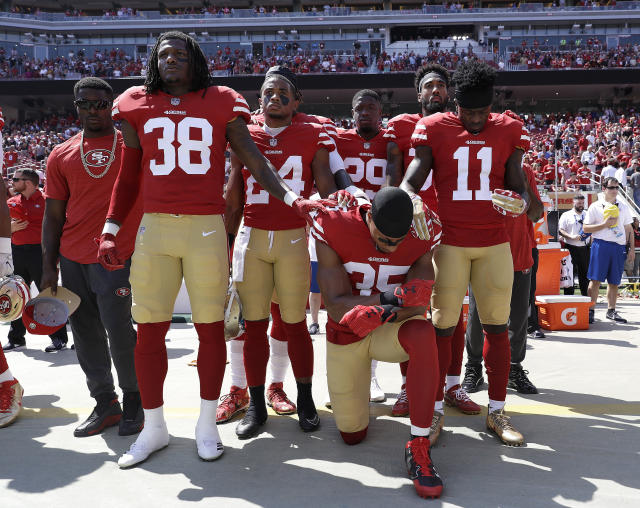 In this Sept. 10, 2017, file photo, 49ers safety Eric Reid kneels during the national anthem. (AP)And then this Sunday came another peak (or valley), when Colts ownership allowed Pence to make an appearance to create an outcome that could have been presumed from 1,000 miles away: a political statement cooked up by Trump’s administration to stoke his base and once again embarrass the NFL. Pence fulfilled what Trump asked for so many months ago when he urged fans to walk out of games if players knelt during the national anthem. Another self-inflicted injury that will only heighten the political fervor that has swirled around the NFL for weeks. On Sunday night, Jones then said he will not play any Cowboys players who “disrespect the flag.”As one league source with intimate knowledge of the protests said in disgust on Sunday, “Why were the Colts stupid enough to invite [Pence] after what Trump has been saying about the NFL? They only have themselves to blame.”Whoever is to blame – and whatever football energy is devoured because of it – the NFL’s endless political brush fire has more tinder to burn this week. Just the latest iteration of the saga that has gone from a speech to tweets to a walkout staged from the highest office in the land.The cycle moves on another week. Much to the chagrin of the weary executives who are powerless to stop it.More NFL coverage from Yahoo Sports: 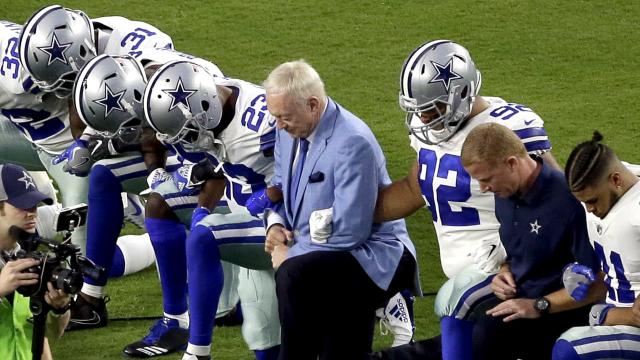 Emmitt Smith on the importance of “America’s Team” being at the forefront of Anthem protestsHall of Fame running back Emmitt Smith stopped by the Yahoo studios to discuss Ezekiel Elliott and the Cowboys handling of anthem protests.