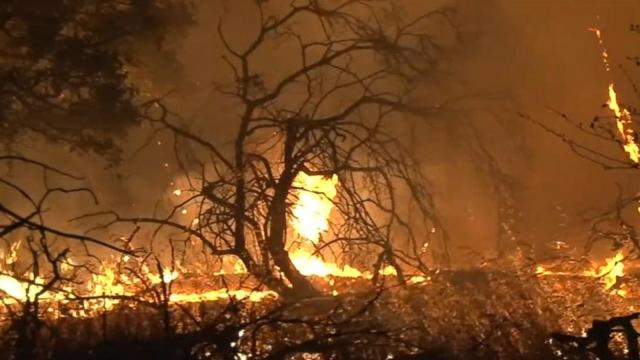 Video Not Available Unfortunately, this video is not available in your region.SS-100-202 Massive wildfires sweeping through California have killed at least 31 people and damaged thousands of homes, businesses and other buildings, authorities said.More than half of the deaths occurred in Sonoma County alone, officials said. Taken together, the death toll from this week’s fires exceeds the number of fatalities in the 1933 Griffith Park Fire in Los Angeles, the deadliest wildfire in California history.Firefighters were still battling 21 large wildfires in multiple counties as of Thursday morning. Intensified by strong winds, the flames have charred more than 190,000 acres of land, damaged or destroyed at least 3,500 structures and forced more than 20,000 residents to evacuate, according to the California Department of Forestry and Fire Protection.Containment of the fire has increased, and weather conditions are expected to improve overnight, officials said Thursday.The causes of the fires is still under investigation.More than 8,000 firefighters and support personnel are battling the fires, according to the National Interagency Fire Center. California Gov. Jerry Brown has declared a state of emergency for Napa, Sonoma and Yuba counties in Northern California.With firefighters stretched thin throughout the state, federal agencies as well as neighboring Nevada and nearby Washington state are assisting with resources. Authorities said 1,000 fire departments from San Diego to Oregon have joined the effort. Requests for resources have also gone out to Idaho, Montana, North and South Carolina, New Mexico, Arizona, as well as Australia, said Mark Ghilarducci, director of California Governor’s Office of Emergency Services. 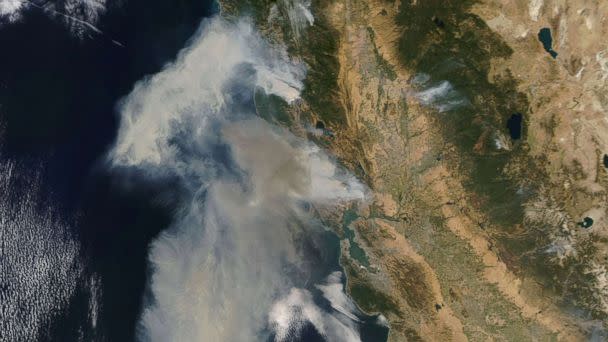 About 400 people were unaccounted for in Sonoma County as of Thursday morning, according to the sheriff’s office. Out of about 1,000 missing people reports that have been filed since the fires began, about 600 people have been safely located, the Sonoma County Sheriff’s Office said Thursday afternoon. Officials said some of the reports of missing persons may be duplicates.At least 7,000 people were without power Wednesday in Napa County.In the wake of the fires, the Sonoma County Sheriff’s Office announced Thursday morning that it has arrested five people for looting in evacuation areas.Three of the individuals were Santa Rosa natives who were arrested and booked on a number of offenses. A 28-year-old man was found with two stolen bikes as well as narcotics, police said. A 48-year-old woman and a 49-year-old woman were also arrested, according to the Santa Rosa Police Department.In the city of Santa Rosa, 2,834 homes had been destroyed. Critical infrastructure was also lost in the blaze, including the fire station, Santa Rosa Mayor Chris Coursey said Thursday afternoon. 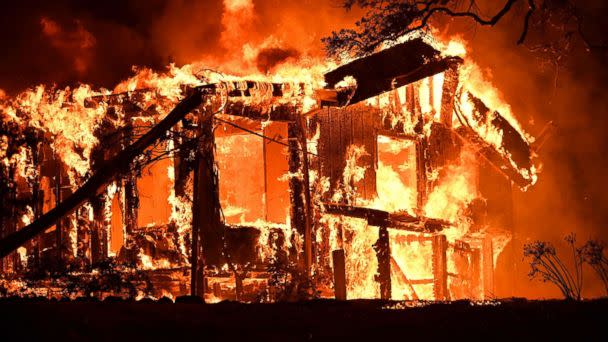 With mandatory evacuation orders still in place, many residents in the affected areas have been warned not to return to their homes until further notice.”Life is more important than property,” Sonoma County Sheriff Robert Giordano said at a press conference Tuesday.He said he thinks the wildfires will be „one of the worst natural disasters in California history.” 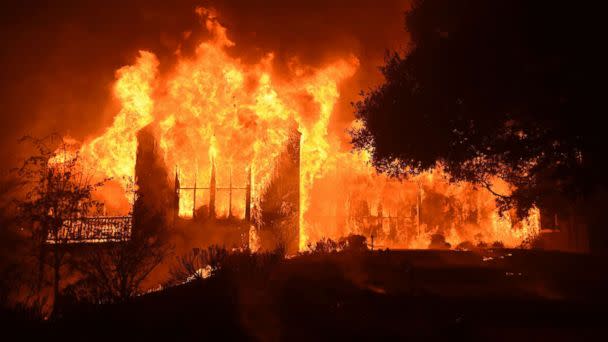 Here’s a roundup of the main fires threatening the state:Southern LNU Complex fires The so-called Atlas, Nuns, Patrick and Pressley fires are considered branches of one giant blaze in Napa, Solano and Sonoma counties — collectively known as the Southern LNU Complex — according to the California Department of Forestry and Fire Protection.Mandatory evacuations and road closures were underway in Napa, Solano and Sonoma counties, the heart of California’s wine country, as the flames threatened thousands of structures.The Atlas fire has scorched 43,762 acres in Napa and Solano counties since the inferno began Sunday night, and just 3 percent of the blaze was contained Wednesday night. The enormous fire has destroyed 125 structures. 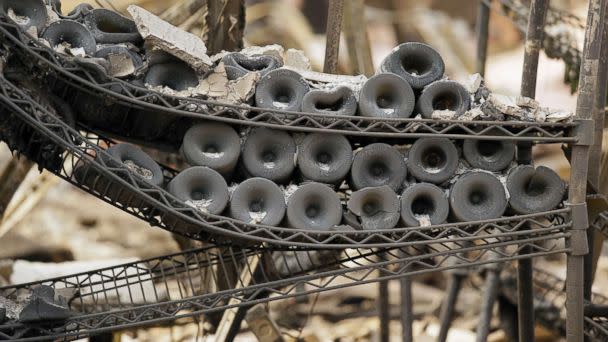 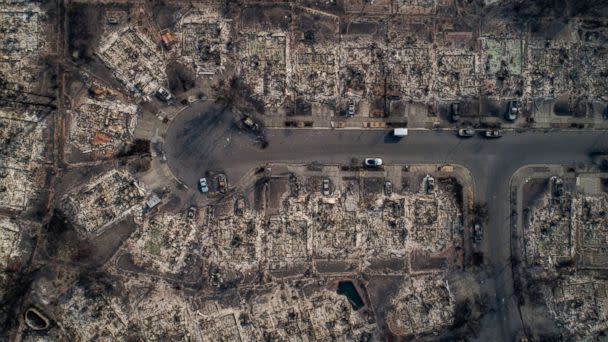 Central LNU Complex firesThe Tubbs and Pocket fires make up another enormous blaze, known as the the Central LNU Complex, in Napa and Sonoma counties, according to the California Department of Forestry and Fire Protection. More than 16,000 structures are threatened.The Tubbs fire has burned 34,270 acres in Napa County since Sunday night, and it was 10 percent contained Thursday morning. The fire has destroyed 571 structures, and is just 10 percent contained, authorities said. Most of the deaths were due to the Tubbs fire.Meanwhile, the Pocket fire has singed 8,130 acres in Sonoma County since Monday morning. 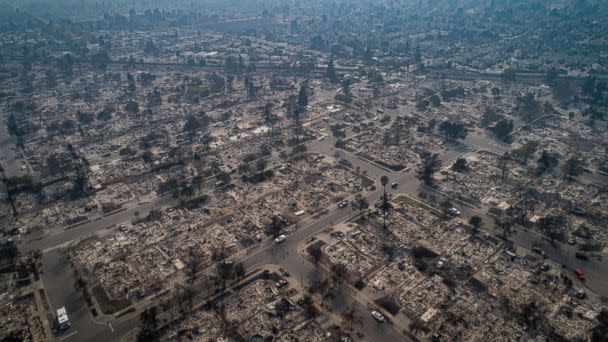 Mendocino Lake Complex fires The Redwood/Potter fires and the Sulphur fire make up a giant blaze, known as the Mendocino Lake Complex, in Lake and Mendocino counties, according to the California Department of Forestry and Fire Protection.The Redwood/Potter fires have scorched 32,100 acres in Mendocino County since Sunday night. It was just 5 percent contained Thursday morning.The Sulphur fire has charred 2,500 acres in Lake County since late Sunday night, and 45 percent of it was contained by Thursday morning. 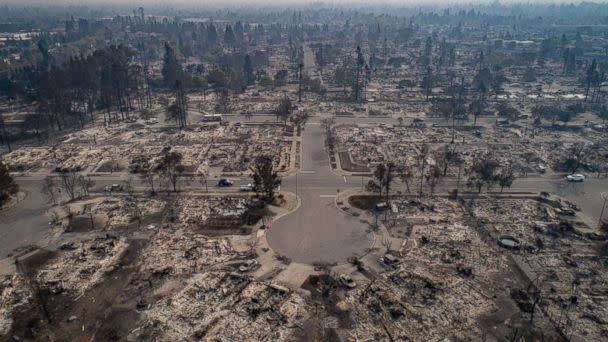 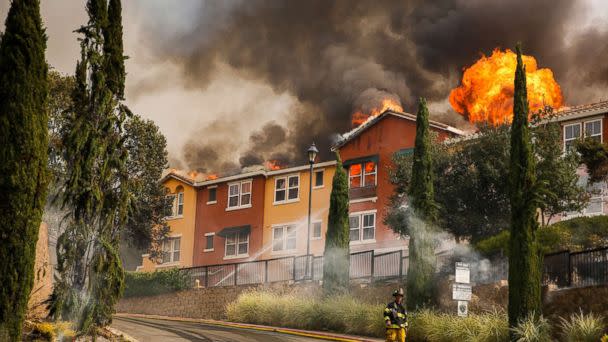 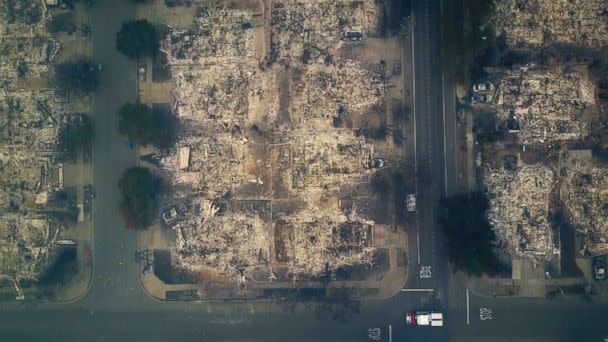 Canyon 2 fire The Canyon 2 fire has burned 9,217 acres in Southern California’s Orange County since the flames started Monday morning. It was 60 percent contained by Thursday morning, according to the California Department of Forestry and Fire Protection.At least 3,000 residents were evacuated in and around Anaheim as thousands of structures were threatened by the blaze. 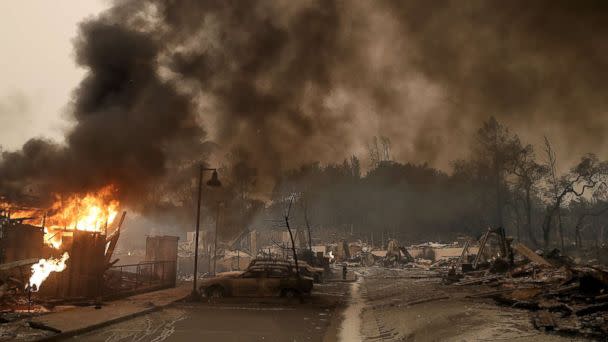 Cherokee fire The Cherokee fire has singed 8,360 acres in Butte County since Sunday night and was 60 percent contained Thursday morning, according to the California Department of Forestry and Fire Protection. 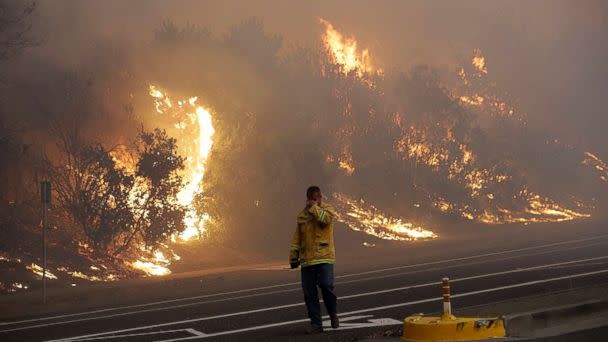 37 fire The 37 fire has scorched 1,660 acres in Sonoma County since it started Monday afternoon. It was 70 percent contained by Wednesday morning, according to the California Department of Forestry and Fire Protection. 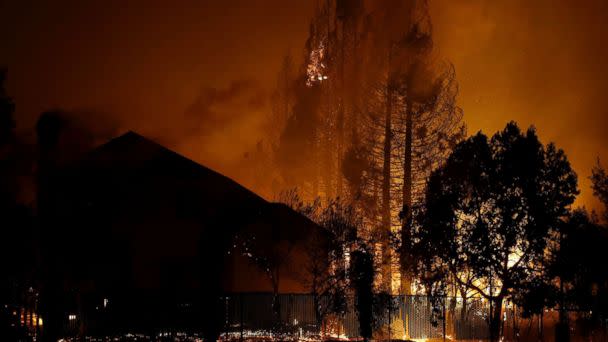 What’s ahead for California A cold front swept through much of California on Wednesday, bringing more gusty winds and lower humidity, according to ABC News meteorologists.Winds were expected to continue to be gusty on Thursday, with some up to 50 mph in central California. Relative humidity will be in the teens in central and northern California and in the single digits in Southern California.These winds will continue through Saturday as a second cold front approaches the region, meteorologists said.The weather conditions have local authorities concerned about „aggressive” fire behavior.The National Weather Service has issued red flag warnings for Central and Northern California for Wednesday through Thursday. Fire weather watches were issued for Southern California for Thursday through Saturday. An air quality alert was also issued for central California. 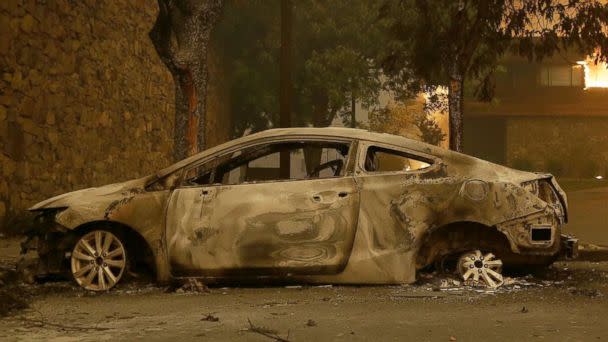 As firefighters work to snuff the raging blazes, Sonoma County Sheriff’s Sgt. Spencer Crum told ABC News officials have asked everyone to „help us out.”Crum confirmed that the alert system put in place gave residents ample time to evacuate and likely prevented many deaths.”We have a subscription service where we can alert our residents, and we did that right away, trying to notify everybody where the fire was, where it was going and how fast it was going, and I think it saved a lot of lives,” he said.The sheriff’s sergeant conceded that it could take a long time for communities to bounce back.”We have a lot of rebuilding here,” Crum said. 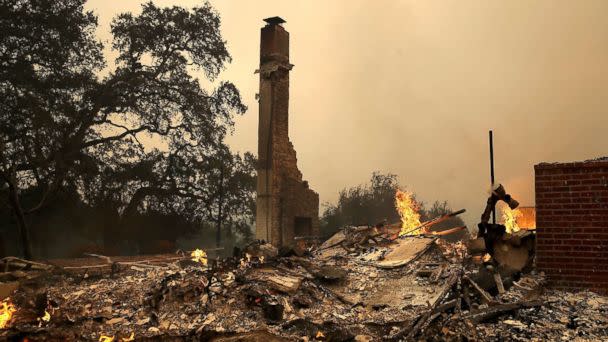 Santa Rosa resident Jeff Okrepkie said he fled his home of five years knowing that it could very well be leveled when he returned.”All that good stuff, I’m never going to see it again,” he told ABC’s San Francisco station KGO on Monday.Okrepkie said he and his wife tried their best to gather their most precious documents, photos and mementos, but it was impossible to grab everything in time. 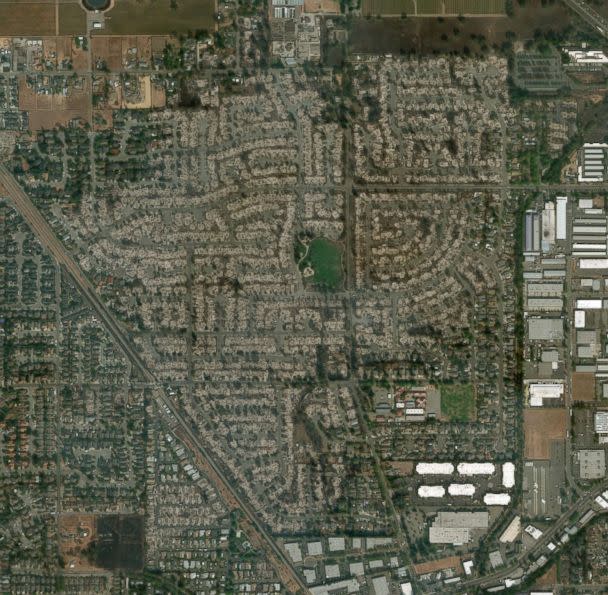 Mike Turpen, 38, said he was at a bar in the Glen Ellen area of Sonoma County when someone stormed in wearing a smoke mask and yelled, „Fire!” He said he drove through the flames in his pickup truck with hopes of saving his home.Turpen said his yard was scorched and still flaming in some spots, but he managed to keep his home from burning down.”It was like Armageddon was on,” Turpen told KGO. „Every branch of every tree was on fire.”Chris Canning, mayor of the city of Calistoga, said that while there has been no fire activity within city limits, residents are still being urged to evacuate.”Your presence in Calistoga is not welcome if you are not a first responder,” Canning said in a press conference Thursday morning, according to the Napa Valley Register. „Your choice to stay, and there have been very few of them, is a distraction to our first responders. You will not be given life safety support at this point. You are on your own.”ABC News’ Matt Foster, Max Golembo, Jenna Harrison, Marilyn Heck, M.L. Nestel, Rex Sakamoto and Ginger Zee contributed to this report.