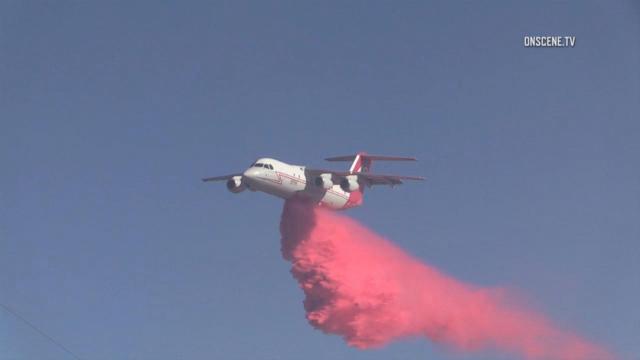 Video Not Available Unfortunately, this video is not available in your region. SS-100-202 Parts of California will be at an enhanced risk of wildfire ignition this week amid record-breaking heat and gusty winds, meteorologists said.The greatest risk will be in southern parts of the state where temperatures are forecast to hit dangerous triple-digit levels on Monday and Tuesday, meteorologists said.The heat, coupled with gusty winds, will create “the most dangerous fire weather conditions seen in the past few years,” according to the National Weather Service. Wind gusts could top between 50 mph in some areas on Tuesday.View image on Twitter 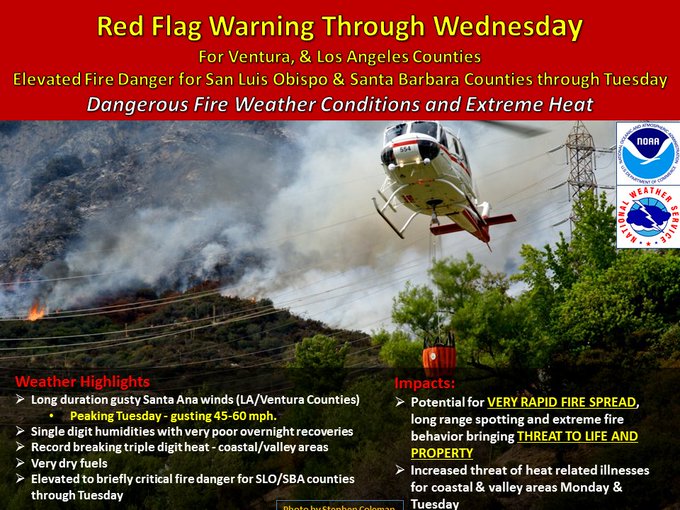 NWS Los Angeles @NWSLosAngeles High fire danger for SW CA through Wednesday. The most dangerous fire weather conditions seen in the past few years. Use caution! #CAwx 4:38 AM – Oct 23, 2017“The combination of strong, gusty Santa Ana winds, unseasonably hot and very dry conditions will bring an extended period of critical fire weather conditions across much of southern California,” ABC News Meteorologist Daniel Peck said Sunday. “The concern is that things could go from good to very bad, very quickly in southern CA this time around.”An Excessive Heat Warning is in effect for much of southwestern California, including San Diego to Los Angeles through Tuesday, where temperatures will be running upwards of 20 degrees above average for this time of the year, meteorologists said. 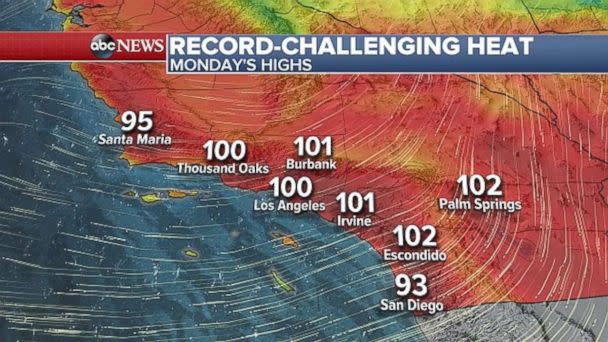 Decades-old daily record highs, some dating back to the early 1900s, are expected to be broken in many SoCal cities on Monday and Tuesday. Long Branch, located about 30 minutes south of Los Angeles, could see temperatures as high as 104 degrees on Monday, which would break a 52-year-old daily record high.Meanwhile, Los Angeles could hit a high of 102 degrees on Tuesday, which would top the daily temperature record of 99 degrees reached in 1909.After battling some of the deadliest and most destructive wildfires in the state’s history in recent weeks, The California Department of Forestry and Fire Protection (CAL Fire) said it would increase its staffing levels with additional firefighters, fire engines, fire crews, and aircraft to respond to any new wildfires.“This is traditionally the time of year when we see these strong Santa Ana winds,” said Chief Ken Pimlott, director of CAL FIRE said in a statement. “And with an increased risk for wildfires, our firefighters are ready.””Firefighters from other states, as well as Australia, are here and ready to help in case a new wildfire ignites,” he added.Nearly 6,000 firefighters continued to battle 10 large wildfires burning across the Golden State on Sunday. At the peak, there were 21 major wildfires that together charred more than 245,000 acres of land in recent weeks. 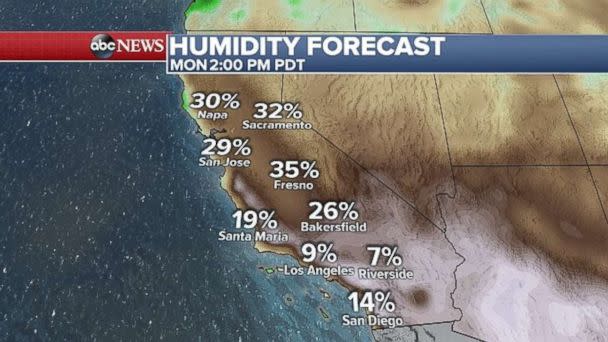 The fires destroyed more than 8,400 homes and buildings and have been blamed for the deaths of 42 people. All of the remaining fires were more than halfway contained as of early Monday, authorities said.The National Weather service has issued several Red Flag Warnings and Fire Weather Watches across Southern California due to gusty winds, low humidity and high temperatures. There will be a slight improvement with the heat on Wednesday, with notable relief expected between Thursday and Friday, meteorologists said. 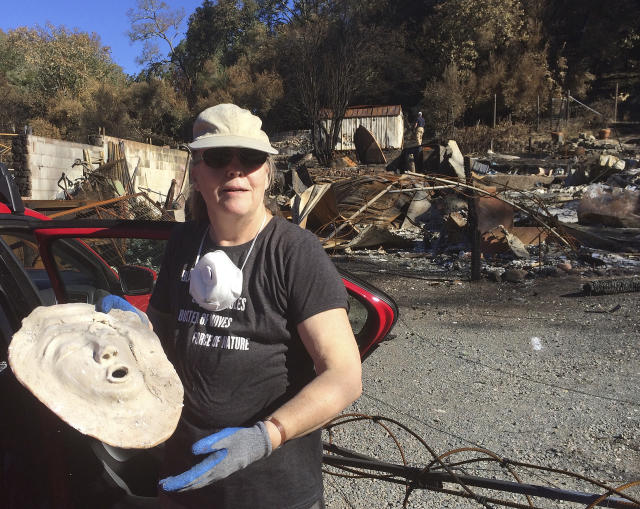 Joyce Farinato, a pastor and artist who lost her Glen Ellen, Calif., home in recent wildfires, stands in the ruins Monday, Oct. 23, 2017, and shows a mask she found in the debris, one of her few surviving possessions. Farinato said she wants to follow the environmental rules on cleaning burned sites but needs to know what they are. (AP Photo/Ellen Knickmeyer)SANTA ROSA, Calif. (AP) — Government officials outlined plans Monday for what they say will be the largest fire clean-up in California history, aimed at removing hazardous substances and ash from 8,400 homes and other structures burned in Northern California wildfires.With hundreds of anxious homeowners listening, state emergency services official Eric Lamoureux set a target of early 2018 for completing the clean-up and allowing owners to start rebuilding.California has declared a public health emergency in the fire area, in part because of concern for hazardous substances ranging from freon in air-conditioners to asbestos in older homes. The fires that began Oct. 8 have killed at least 42 people, making them the deadliest series of wildfires in state history.”The size and scope of this debris removal process will be one for the record books,” Sen. Mike McGuire, a Democrat from the wine-country town of Healdsburg, told fire survivors at a Santa Rosa community forum. The meeting gave residents some of the first briefings on the clean-up to come.Authorities have warned residents returning to the ruins of their homes to beware of possible hazardous residues in the ashes, and required them to sign forms acknowledging the danger.Many survivors — at Monday’s forum, and in fire zones where people are returning — say they are confused about what authorities will allow them to do at their blackened properties before the massive waste removal.”How do you get to get your mourning started if I can’t stop and put hands” on the scattering of possessions left, asked resident Joyce Farinato, who wore gardening gloves and a mask Monday as she walked through the chunks of concrete and bent metal that were all that was left of her home in rural Sonoma County.”I’d like to know what’s hazardous. What are we looking for?” Farinato said.In Santa Rosa, authorities with the Federal Emergency Management Administration and the U.S. Army Corps of Engineers joined local and state officials answering other questions from homeowners.In two of the hardest-hit areas, Sonoma and Napa, the U.S. Environmental Protection Agency will be the agency that moves first, removing any hazardous materials from the thousands of sites, officials said Monday. State agencies would handle the same task in five other burned counties. The EPA effort would start this week, said Lamoureux, of California’s Office of Emergency Services.Hundreds of teams led by the U.S. Army Corps of Engineers are to move in next, removing ash and rubble.In Sonoma County, the scene of the most destruction and deaths, county officials will draft environmental standards to be followed by any homeowners who opt to handle the clean-up themselves, at their own expense, officials said. For property owners who let the government handle the clean-up, taxpayers will cover any of the costs of debris removal that insurance doesn’t, Lamoureux said.Authorities have yet to put a price tag on the process.Homeowners shouted questions on matters ranging from their liability in the clean-up to the extent that contractors would be scraping bare building sites.Laney Wall, who lost her home in the Sonoma County community of Fountaingrove, asked why homeowners had to go through the expense, trouble and wait of the clean-up at all.”What legally is the justification for declaring my home site a hazardous waste site, requiring this onerous process?” Wall asked. Officials pointed to the public health concerns, ranging from safety of residents in the burned neighborhoods to concerns for hazardous waste entering waterways and the air.Officials promised more town meetings. Homeowners said that was a good idea.”I just have more questions now,” Danny Thom, another Fountaingrove resident, said after the meeting. 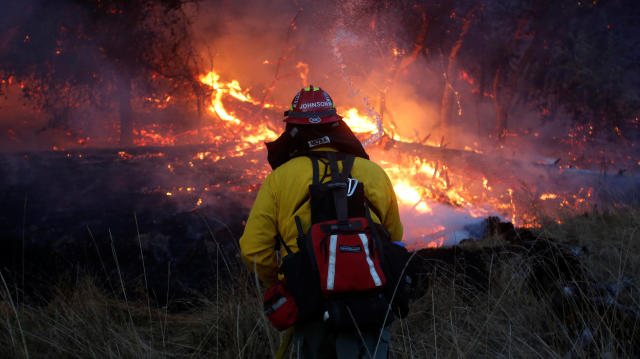 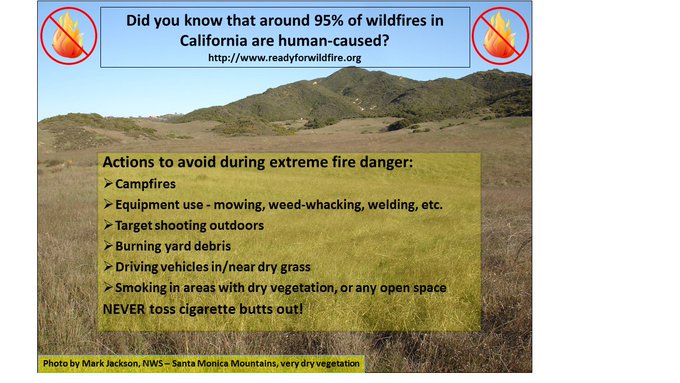 NWS Los Angeles @NWSLosAngeles During this extended period of high fire danger, use extra caution outdoors! Very hot, dry &windy conditions through Wed. #CAfire #CAwx 12:41 AM – Oct 23, 2017 Both Cal Fire and the National Weather Service tweeted a list of activities people should avoid during high risk weather.  Some actions people should not take are fairly obvious: Avoid campfires and burning yard debris. But some high-risk activities may be more surprising, particularly to folks who don’t live in traditionally high-risk fire areas. For example, people shouldn’t mow lawns after 10 a.m, Cal Fire said.Equipment use is one of the top causes of wildland fires, Mohler told HuffPost. Sparks can come from activities as seemingly innocuous as towing a trailer through brush, since any chains dragging could throw sparks, or driving a vehicle over dry grass, as hot exhaust pipes can start fires.Some other common activities dangerous in red flag conditions include shooting firearms and discarding cigarette butts, a spokeswoman for San Diego County warned.  Cal Fire’s website also told families to have an action plan in case of a wildfire, including knowing where to evacuate to and what to take out of a house.“We want to send the message home that now is not a good day to be mowing your weeds,” Cal Fire public information officer Kendall Bortisser told HuffPost. “You should start thinking about evacuation planning: How are you going to get out? What are you gonna take with you? How are you going to reach family? We’ve learned over the years that fire is prone to burn anywhere.”The fire warnings in Southern California come just after the deadliest wildfires in the state’s history hit Northern California, killing dozens of people, destroying thousands of homes and causing more than 100,000 residents to evacuate.

Raging fire breaks out in northern Italy Dozens of people have been evacuated from their homes as wildfires destroy hundreds of hectares in northern Italy. Rough cut (no reporter narration). 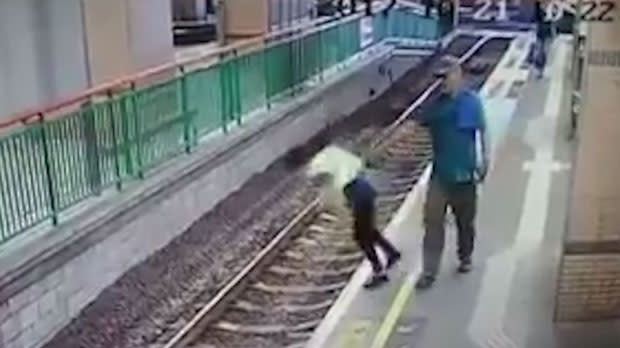 A man shocked onlookers when he pushed a woman onto train tracks at a station in Hong Kong, causing her to fall and hit her head.The harrowing CCTV footage shows him strolling past a woman in a hi-viz vest before knocking her onto the tracks.After falling, she looks up at her attacker.The 59-year-old unnamed cleaner was shoved onto the rails by a man who then slowly walks away from the scene.According to the South China Morning Post, she had been on platform No 5 at the Yuen Long terminal for the Light Rail’s 761P route at about 10.30am.She waved to an acquaintance before being shoved onto the tracks.No train was passing at the time, but the terrifying possibility clearly resonated with social media users, who have shared the video thousands of times.According to the South China Morning Post, the man was arrested on suspicion of assault.A spokeswoman told the newspaper: “The woman suffered injuries to her jaw and was sent to Pok Oi Hospital for treatment.”It is understood the alleged assailant has a Hong Kong identity card. Officers are now searching for a motive.

World Bringing a shipwreck back to life with photogrammetry