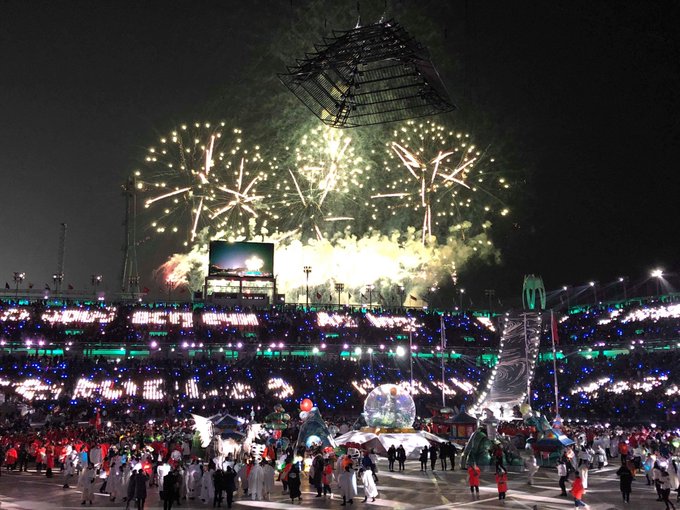 Olympics @Olympics Thank you to all the athletes, volunteers and fans #ClosingCeremony. We

You #PyeongChang2018 #Olympics 3:08 PM – Feb 25, 2018 “You have shown how sport brings people together in our fragile world;; you have shown how sport builds bridges,” Bach said. “The IOC will continue this Olympic dialogue, even after we extinguish the Olympic flame.”Chinese President Xi Jinping also addressed the crowd via video message, in anticipation of Beijing hosting the Winter Olympics in 2022. Olympians-turned-NBC analysts Tara Lipinski and Johnny Weir will be part of NBC’s broadcast of the ceremony at 8 p.m. ET Sunday.

FILE- In this Friday, Feb. 23, 2018, file photo, President Donald Trump delivers remarks to the Conservative Political Action Conference in Oxon Hill, Md. Trump is expressing frustration with an immigration program that he says lets other countries nominate undesirable citizens for emigration to the U.S. That path to coming to the U.S. does not exist. (AP Photo/Evan Vucci, File)WASHINGTON (AP) — President Donald Trump is expressing frustration with an immigration program that he says lets other countries nominate undesirable citizens for emigration to the U.S. That path to a life in the U.S. does not exist.Trump mischaracterizes the diversity visa lottery program regularly, most recently on Fox News on the weekend and most prominently in his State of the Union speech last month. The only accurate part of his account tends to be that a lottery is involved and that the program is not based primarily on the skills of immigrants. Other countries have no say in how it operates and the lottery is not as random as he describes.A look at his comments and the reality behind them:TRUMP: „I mean we actually have lottery systems where you go to countries and they do lotteries for who comes into the United States. Now, you know they are not going to have their best people in the lottery, because they’re not going to put their best people in a lottery. They don’t want to have their good people to leave. … We want people based on merit. Not based on the fact they are thrown into a bin and many of those people are not the people you want in the country, believe me.” — Fox News phone interview Saturday night.THE FACTS: That’s not how it works.The lottery program is run by the U.S. government. Other countries do not sort through their populations looking for bad apples to put in a „bin” for export to the U.S. Citizens of qualifying countries are the ones who decide to bid for visas under the program.Trump was also wrong in stating in his speech to Congress that the program „randomly hands out green cards without any regard to skill, merit or the safety of our people.”Whether the program adequately addresses those conditions is up for debate. But it’s wrong to say they are given no regard.The program requires applicants to have completed a high school education or have at least two years of experience in the last five years in a selection of fields identified by the Labor Department.Out of that pool of people from certain countries who meet those conditions, the State Department randomly selects a much smaller pool of winners. Not all winners will have visas ultimately approved, because they still must compete for a smaller number of slots by getting their applications in quickly. Those who are ultimately offered visas still need to go through background checks, like other immigrants.The lottery is extended to citizens of most countries, except about 20. Among the excluded countries are many that already have high rates of emigration to the U.S., such as Mexico, Canada and India. The program’s primary goal is to diversify the immigrant population by creating slots for underrepresented parts of the world.In the 2015 lottery program, the State Department randomly selected more than 125,000 people who met the pre-conditions. Citizens of Cameroon, Liberia, Congo, Iran and Nepal led the list, winning about 5,000 potential visa slots each.Among those winners, the department then accepted the first 50,000 who applied for the visas. This is out of millions who typically apply.The program was created with broad bipartisan support. Back in 1990, after a broader immigration bill containing the visa program passed the House, the legislation sailed through the Senate on an 89-8 vote.But now, Trump and likeminded Republicans want to eliminate it and curb family-based immigration as well, in favor of a system that is more focused on bringing in people who have needed skills and education._State Department information on diversity visas: https://travel.state.gov/content/travel/en/us-visas/immigrate/diversity-visa-program-entry/diversity-visa-program-statistics.html_Find AP Fact Checks at http://apne.ws/2kbx8bd Follow @APFactCheck on Twitter: https://twitter.com/APFactCheckEDITOR’S NOTE _ A look at the veracity of claims by political figures