Papua New Guinea sits on the so-called Pacific Ring of Fire, a hotspot for seismic activity due to friction between tectonic plates (AFP Photo/PEDRO PARDO)A powerful 6.9-magnitude earthquake struck the New Britain island of Papua New Guinea on Friday, US seismologists said, but a tsunami threat from the tremor was over.The quake struck at 5:25 pm local time (2125 GMT) about 162 kilometres from the New Britain town of Rabaul, the US Geological Survey said.It was initially recorded at a shallow depth of 10 kilometres (six miles), before it was revised by the USGS to a depth of 35 kilometres.The Pacific Tsunami Warning Center earlier said „hazardous” waves of between 0.3-one metre above tide level could be generated by the quake for some coasts of PNG.It said smaller waves could also hit the Solomon Islands, but later added that the „tsunami threat from this earthquake has now passed”.”It was felt as far away as Kokopo (150 kilometres from the epicentre),” Geoscience Australia seismologist Spiro Spiliopoulos told AFP of the tremor.There were no repor

News Why Florida ranks highest for lightning fatalities in the US

alex.sosnowski AccuWeather•March 30, 2018While Florida is known as the Sunshine State, it is notorious for thunderstorms, lightning strikes and fatalities. On average, Florida has 3,500 cloud to ground lightning flashes per day and 1.2 million flashes per year occur, during a recent 10-year study according to Vaisala.

Static Indian Shores Florida LightningThis photo of a thunderstorm was taken near Indian Shores, Florida, on Aug. 29, 2006. (AccuWeather Fan Photo / gh)Florida ranks fourth in the nation for lightning flashes behind Texas, Oklahoma and Kansas.However, because of the dense population and the amount of people that spend a great deal of time outdoors year-round, more people are struck and killed by lightning in Florida than any other state, according to Vaisala and the National Weather Service.The combination of heat, humidity and sea breezes on both the Gulf and Atlantic coasts makes the perfect breading ground for thunderstorms over the Florida Peninsula.Sea breeze: A focal point for thunderstormsA sea breeze is simply a push of air from the ocean that usually brings a drop in temperature or humidity level during the daytime. This occurs since ocean temperatures often lag behind air temperatures.This phenomenon enhances showers and thunderstorms across inland areas as clouds, showers and thunderstorms tend to focus along the temperature boundary between the cool ocean air and the warm air well inland.As a result, areas between the ocean and the temperature boundary, or sea breeze front, are usually protected from clouds and rain during much of the day.At the beach, a shower first thing in the morning is often not the character of the entire day. During the daytime, the sea breeze generally advances farther inland. Likewise, showers drift inland as the day progresses.During the evening, the sea breeze front either wanders back toward the coast or falls apart. If the sea breeze front survives its trip back toward the coast, it may shower or thunderstorm during the evening at the beach.

Static Sarasota Bay Florida LightningThis photo of lightning was taken from Siesta Key, near Sarasota Bay, Florida, on May 24, 2008. (AccuWeather Fan Photo / beitzdk)When winds aloft are light, the timing of such a storm can occur at roughly the same time every day. Such is the case over the Florida Peninsula during the late spring and summer.Sometimes, two sea breeze fronts may join up and produce robust thunderstorms. This is also a common occurrence over the middle of the Florida Peninsula during the late afternoon and early evening hours in the summertime.

kathryn.galimberti AccuWeather•March 30, 2018 Desert sand drifted into eastern Europe this week, casting snow-covered slopes with an orange hue.A dip in the jet stream propelled dust from the Arabian and Saharan desert, carried by storms that crossed the Mediterranean. The result made the region looks like Mars.Mountains in Russia, Ukraine, Romania and Bulgaria were covered in dust. Skiers took to social media to upload pictures of the rare phenomenon.

orange snow mountain europe(Image via Instagram/margarita_alshina)A sandstorm in northern China’s Inner Mongolia, Beijing and Shanxi province turned the sky orange and reduced visibility, Reuters reported.The air quality level in Beijing rose to hazardous levels. Pollution and smog levels typically rise as winter comes to an end and industrial activity increases.Springtime snow fell in parts of northern Poland and Germany this week, creating messy travel conditions.Severe storms struck southern Texas this week, resulting in flooding and damage from a potential tornado.Both San Antonio and Austin, Texas, established daily maximum rainfall records for the month of March on Wednesday. Dozens of roads in the San Antonio area were closed due to flooding.A possible tornado struck near Corpus Christi, tearing through areas that had been severely damaged during Hurricane Harvey last August.According to KRIS-TV, one of the damaged homes in Holiday Beach had just recently been rebuilt from last summer’s hurricane.Several homes lost their roofs and a house lost its second story, according to the NWS.Baseball season’s Opening Day took place on Thursday, but heavy rain spoiled the first game of the season in some cities. The Pittsburgh Pirates vs. Detroit Tigers and Washington Nationals vs. Cincinnati Reds games will take place on Friday instead.Meanwhile, wildfires threatened Florida amid a warm and dry pattern this week.A fire in Port St. Lucie, Florida, forced evacuations and road closures due to smoky conditions on Thursday.
View image on Twitter 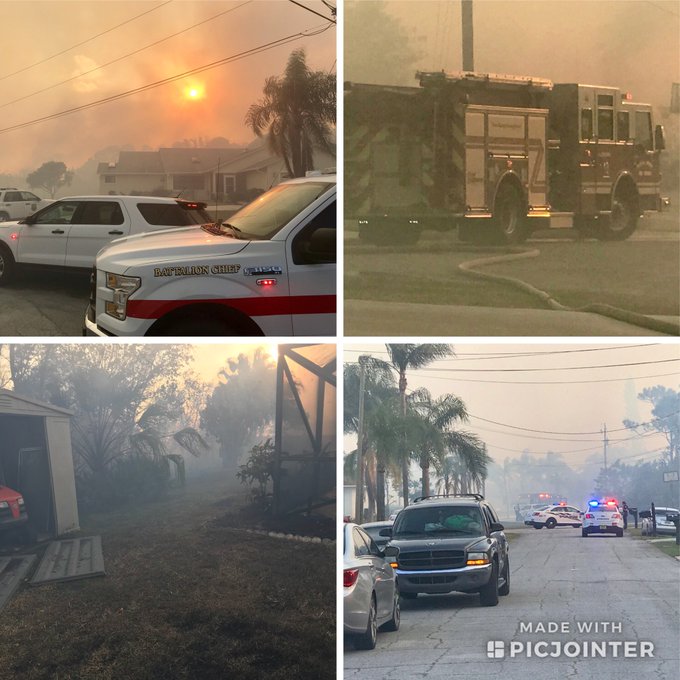 An aerial view shows the Yadrovo landfill near the town of Volokolamsk, where doctors have treated dozens of children complaining of dizziness and nausea because of noxious fumes coming from a local dump, authorities said (AFP Photo/Dmitry SEREBRYAKOV)Moscow (AFP) – Russia on Friday announced a „high alert” in a town where noxious fumes have leaked from a landfill site, distributing masks and respirators to residents who have held repeated protests.The Kremlin said it was closely watching the situation in Volokolamsk, a town of around 20,000 people about 120 kilometres (75 miles) west of Moscow.Residents have long demanded the closure of a landfill site that has been emitting a noxious sulphurous smell, in a rare case of coordinated grass-roots civil action.Last week, doctors treated dozens of children who complained of dizziness and nausea because of fumes from the Yadrovo landfill site near the town, which is in the Moscow region.A spokesman for the regional emergencies ministry said „a state of high alert” had been imposed in the town and that monitoring of the environment „will be stepped up” with the „non-stop” testing of air quality.Local authorities had also begun distributing medical masks and respirators to those who needed them, he said.Volokolamsk residents had on Thursday held a rally demanding that the authorities formally declare a state of emergency, which they have not so far done.Another rally is planned for Sunday.”We are in constant touch with the regional authorities and the government over this,” President Vladimir Putin’s spokesman Dmitry Peskov told reporters.”Everyone understands that this is a complicated problem, that it cannot be solved overnight.”Officials say a new facility will eventually be built which will not emit fumes.Russia sends almost all its rubbish to landfill and there is no obligation for people to recycle household waste, creating a growing problem despite the country’s vast territory.ts of damage at this stage, Spiliopoulos said, adding that the affected areas were remote.The earthquake was quickly followed by two powerful smaller tremors, measuring 5.3 and 5.1, both at a depth of 35 kilometres, according to USGS.The quake came on the heels of a separate 5.8-magnitude tremor some 43 kilometres west of Honiara, the capital of the Solomon Islands, which struck at 6:51 am local time (1851 GMT) at a depth of 10 kilometres.There are regular quakes in the region, and PNG is sitting on the so-called Pacific Ring of Fire which is a hotspot for seismic activity due to friction between tectonic plates.PNG was hit by a 7.5-magnitude quake on February 26 that buried homes and triggered landslides in its highlands region, killing at least 125 people.Its mountainous and remote terrain means it often takes several days for information about damage from quakes to reach officials and aid agencies.