This fallen oak tree heavily damaged the home of Jennifer Lyles in Natchez, Miss., after a tornado hit early Thursday, Nov. 1, 2018. At least 11 tornadoes have been confirmed by National Weather Service surveyors so far in Louisiana and Mississippi as part of a storm system that moved across the region Wednesday night and Thursday. (AP Photo/Rogelio V. Solis)BIRMINGHAM, Ala. (AP) — The Latest on severe weather (all times local):5:20 p.m.At least 28 tornadoes have been confirmed by National Weather Service surveyors in Texas, Louisiana, Mississippi and Alabama as part of a storm system that moved across the region Wednesday night and Thursday.Damage surveys are continuing in some areas.Louisiana has recorded nine tornadoes, including one with top winds estimated at 134 mph (215 kph) that ripped a 20-mile (32-kilometer) path across central Louisiana. It damaged more than 100 structures and injured two people who were inside a mobile home that flipped.Mississippi also saw at least 10 twisters, including one in Natchez with estimated top winds of 115 mph (185 kph) that damaged trees and structures.Seven tornadoes have been recorded in east Texas including one with top winds of 107 mph (172 kph) that damaged 16 structures in Cushing.Alabama saw two tornadoes including one that damaged a factory in Cusseta._7 a.m.Forecasters said most of the East Coast was at risk for severe weather Friday, with winds as strong as 60 mph, isolated tornadoes and heavy rain possible as the Gulf Coast recovered from storms blamed for two deaths.Waves of weather moving in from the Gulf of Mexico at daybreak brought rain and lightning to parts of the Florida Panhandle struck last month Hurricane Michael, and the threat was supposed to spread to the north and east through the day.The Storm Prediction Center said there was a marginal risk for severe thunderstorms along a line running from Florida’s west coast to southern New Hampshire in New England.At least two deaths along the Gulf Coast were blamed on storms that hit Wednesday night and Thursday._Midnight Powerful storms are expected to continue Friday through a region still trying to recover from Hurricane Michael.Storms covered a wide area of the country reaching from beaches to the Great Lakes, but howling wind and driving rain threw a particular scare into the Florida Panhandle, which was ripped apart by Hurricane Michael less than a month ago.At least two people’s deaths have been attributed to the storms and at least 12 tornadoes had been confirmed by Thursday night in Louisiana, Mississippi and Alabama, with the damage surveys expected to continue Friday.Officials are concerned about heavy rain and any structures that have already been damaged, as well as loose tree limbs being toppled by strong wind or rain, Lawrence said. Hundreds of homes protected only by flimsy tarps were particularly vulnerable.The Storm Prediction Center reported downed trees and utility lines from eastern Texas to northwest Alabama. The Southeastern storms left nearly 110,000 homes and businesses without electricity at the height, and both weather-related deaths occurred in wrecks.

brian.lada,AccuWeather•November 2, 2018 A line of severe thunderstorms blasted across central Florida on Friday afternoon, causing property damage, power outages and travel disruptions.”A strong line of thunderstorms arrived in Florida this afternoon due to a vigorous cold front,” AccuWeather Meteorologist Brett Rossio said.”Along this line, there were a few embedded radar-indicated tornadoes. Occasionally, there can be brief tornadoes along lines of thunderstorms such as this,” Rossio said.The worst of the storms focused on west-central Florida, with the National Weather Service (NWS) issuing over half a dozen tornado warnings in the area, including in Tampa, Florida.The NWS has already confirmed at least one tornado near New Port Richey, Florida, that caused EF1 damage. Severe storms track across Florida on Friday afternoon

Emergency personnel responded to a scene of a collision that killed three children crossing SR 25 as they were boarding their school bus north of Rochester, Indiana on Tuesday, Oct. 30, 2018,. (Santiago Flores/South Bend Tribune via AP)INDIANAPOLIS (AP) — Indiana legislators are pushing to add cameras on the outside of school buses after police say a driver ignored a stop arm and crashed into children crossing a road, killing three and critically injuring another.Republican Rep. Jim Pressel said he was already working on such legislation before the accident Tuesday morning in Fulton County.Indiana State Police Sgt. Tony Slocum said the pickup’s driver, Alyssa Shepherd, 24, of Rochester, was arrested and charged with three counts of reckless homicide and one misdemeanor count of passing a school bus when an arm signal device is extended, causing bodily injury.Pressel said bus drivers have told him vehicles frequently illegally pass school buses that have their stop arms deployed.”It’s a huge problem,” he said.More than 3,000 drivers have violated the state’s school bus stop-arm law, according to the Indiana Department of Education. Under the law, an officer must witness the violation to ticket someone, according to Indiana State Police Sgt. John Perrine.”We almost have to be in the perfect position to see that that stop arm is out to see the relation, the location of that car, as they’re passing the bus,” Perrine said.The cameras would be mounted to the outside of buses and would take pictures of drivers who pass when the stop arm is deployed. Law enforcement agencies could then use the pictures to issue charges or citations.Previous attempts to employ stop-arm cameras in Indiana have run into roadblocks.”The concern expressed at the time was about privacy,” said Democratic Rep. Ed Delaney, who co-sponsored stop-arm camera legislation several years ago. „I just don’t share that.”Republican Sen. Eric Bassler said he also hopes to advance a bill facilitating misdemeanor charges against drivers who commit stop-arm violations.”I hate to think of this,” he said. „But tragedies lead to people taking action. Maybe something like this would have greater likelihood now because of what happened.”
Heavy rain, strong winds moving into Northeast ahead of weekend 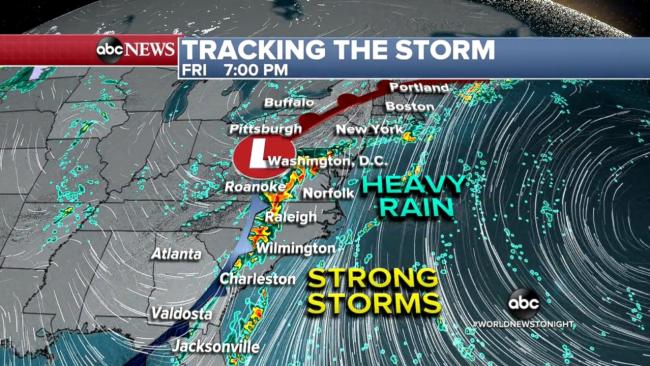 Scroll back up to restore default view.Heavy rain, strong winds moving into Northeast ahead of weekend originally appeared on abcnews.go.comA large storm system moving through the Gulf Coast brought a November tornado outbreak to the region on Thursday with 16 reported tornadoes.Now the storm system is moving into the Northeast and the East Coast with heavy rain and damaging winds.Ahead of the storm, flood watches and high wind watches have been issued from Ohio to Maine.

PHOTO: Flood and high wind watches are in effect on Friday for parts of the Northeast. (ABC News)The storm system stretches from the Gulf Coast to the Northeast on Friday morning. Heavy rain is developing in the Gulf this morning.As the cold front and a low pressure move east and north, strong to severe storms are expected from the Carolinas into the Northeast Friday afternoon.

PHOTO: Heavy rain will continue throughout the day on Saturday for New York and New England. (ABC News)The heavy rain will continue all night into Saturday morning for the Northeast. Urban flooding is a serious concern from Washington, D.C., to Boston.About 1 to 3 inches of rain is forecast for the I-95 corridor with more than 3 inches of rain possible locally from New York to Maine.

PHOTO: As much as 3 inches of rain could fall locally in parts of the Northeast. (ABC News)Behind the storm, gusty winds of 30 to 60 mph are expected for the Northeast and New England. These winds could bring trees and power lines down, especially after all the rain has soaked the ground.

U.K.-based EasyJet said in a statement Wednesday that it submitted a revised expression of interest in Alitalia, while Delta also presented a proposal. Italian state railway company Ferrovie dello Stato said it also made an offer.The bids raise the prospect of Alitalia gaining multiple owners, with EasyJet bringing its expertise to bear on short-haul operations, and Atlanta-based Delta helping to run lucrative long-haul flights out of Milan and Rome. Ferrovie would most likely act as an anchor investor.State-appointed administrators for Alitalia confirmed that two binding bids had been received, together with one expression of interest, without saying who they were from. Economic Development Minister and Deputy Prime Minister Luigi Di Maio said that “finding an industrial partner is going to be key.”Unprofitable Alitalia went into liquidation last year when former 49 percent shareholder Etihad Airways of Abu Dhabi pulled the plug on funding and workers rejected a 2 billion-euro ($2.3 billion) recapitalization tied to 1,600 job cuts from a workforce of 12,500.Bridge Loan An initial bid deadline of April 30 this year was extended to Oct. 31 as Italian political parties struggled to form a new government. The airline has been surviving on a 900 million-euro bridge loan that expires in December, though the facility could be extended while the search for investors continues, according to Italian press reports.Deutsche Lufthansa AG, which put its name forward earlier in the process, said it decided not to bid, reiterating recent comments from Chief Executive Officer Carsten Spohr that Alitalia would need to be significantly restructured for it to be interested. Also previously involved in the bidding were EasyJet’s low-cost rival Wizz Air Holdings Plc and Air France-KLM Group, a former Alitalia shareholder previously linked to EasyJet’s approach which is about 10 percent held by Delta.The U.S. company described Alitalia as a long-standing partner in its trans-Atlantic venture with Air France-KLM and said it’s continuing to explore ways to work with the Rome-based carrier. EasyJet said its submission is consistent with its “existing strategy” for Italy, without revealing details.Rail Interest The involvement of Ferrovie could be a complication for EasyJet, since its high-speed trains are a major competitor for Alitalia on domestic routes. The rail group became part of Italy’s planning following a March general election that led to a populist coalition of the Five Star Movement and League parties.The government itself could also take a 15 percent stake, reports have said, something that could form a further obstacle to the wholesale job cuts corporate investors might want to impose.Tim Clark, president of Dubai-based Emirates, the world’s biggest airline on long-haul routes, said Thursday in Monaco that his company didn’t bid but that the Italian market is attractive because of its size and robust demand.“You see carriers circling around the edge of Alitalia, but whether they’ll plunge in and eat it all I don’t know,” he said.–With assistance from William Wilkes.To contact the reporters on this story: Christopher Jasper in London at cjasper@bloomberg.net;Chiara Albanese in Rome at calbanese10@bloomberg.netTo contact the editors responsible for this story: Anthony Palazzo at apalazzo@bloomberg.net, Jerrold Colten, Andrew NoëlFor more articles like this, please visit us at bloomberg.com©2018 Bloomberg L.P.