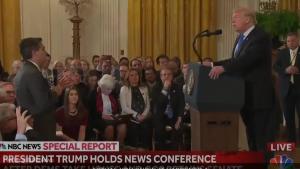 CNN addressed the decision Wednesday, calling it an “unprecedented decision” based on “lies.” The news outlet said Acosta had the network’s full support.“It was done in retaliation for his challenging questions at today’s press conference,” CNN communications said in a statement posted to Twitter. “In an explanation, Press Secretary Sarah Sanders lied. She provided fraudulent accusations and cited an incident that never happened.”“This unprecedented decision is a threat to our democracy and the country deserves better,” the company continued.At the White House news conference Wednesday, Trump called Acosta a “rude, terrible person” when he refused to sit down after asking the president about a racist anti-immigration ad his re-election campaign had paid for and promoted ahead of Tuesday’s midterm elections.Acosta refused to give up the microphone when a White House intern tried to grab it from him, infuriating Trump.“I’ll tell you what, CNN should be ashamed of itself having you working for them … You shouldn’t be working for CNN,” Trump said to Acosta. In a series of statements on Twitter, Sanders characterized Acosta’s actions as “placing his hands on a young woman,” though video of the exchange shows Acosta turning away from her as the intern reaches over his arm to take the microphone from his hand.“This is a lie,” Acosta tweeted back at Sanders. Reporters quickly began defending Acosta and denounced the accusation Sanders lodged at him.

Yamiche Alcindor@YamichePlease watch this. @Acosta did not grab or put his hands on this young lady.MSNBC@MSNBCBREAKING: White House aide grabs and tries to physically remove a microphone from CNN Correspondent Jim Acosta during a contentious exchange with President Trump at a news conference. 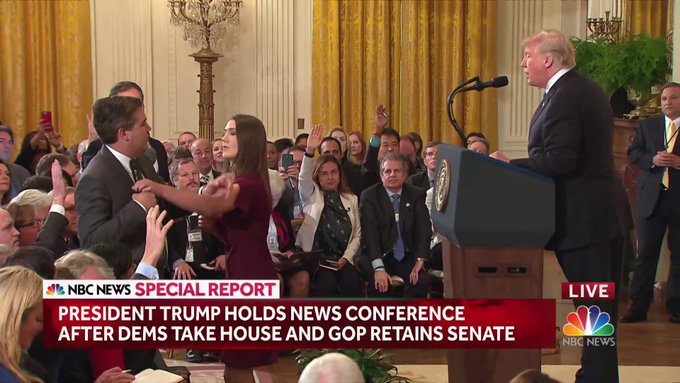 Ali Vitali@alivitali This is wrong and deeply concerning.Jim AcostaThe US Secret Service just asked for my credential to enter the WH. As I told the officer, I don’t blame him. I know he’s just doing his job. (Sorry this video is not rightside up) With several races undecided, check back for updates at Seattletimes.com.

Sean Quinton: 206-652-6188 or squinton@seattletimes.com; on Twitter: @quinton_sean. Sean Quinton is the metro producer for The Seattle Times.

The secretary of state’s website said Wednesday evening that all ballots had been counted, and that Kemp led Abrams with 1,973,098 votes to her 1,910,388. That gave Kemp 50.33 percent of the vote, just barely enough to avoid falling below the 50 percent threshold that would trigger an automatic runoff.Part of the challenge in verifying the result in Georgia is that Kemp has resisted calls to switch the state to voting machines that have a paper trail. Georgia is one of only five states in the country that uses electronic machines that do not provide an auditable paper trail. “Georgia’s voting systems are 16 years old, and the state can’t double check if its election results are accurate because it uses voting machines that don’t have a paper trail,” Axios reported in August.Kemp was the only state official to decline assistance from the Department of Homeland Security to secure its voting system, Politico reported in July.That leaves the integrity of the result in the hands of Kemp to an unusual degree. He has resisted calls to resign his position to avoid the very kind of conflict of interest that now leaves him in the position of candidate and referee over a tight election.“If this is not a breach of public trust and abuse of power … I don’t know what is,” Groh-Wargo said.Kemp has faced criticism for using the power of his office to investigate minority voter groups when they have electoral success, to remove more than 2 million voters from the rolls for inactivity, and for putting thousands of voters in limbofor minor discrepancies between their voter registrations and state or federal records.The Associated Press found in October that Kemp’s office had put more than 53,000 voter registrations in “pending” status because of their “exact match policy,” and that most of the registrations affected by this policy were for African-Americans.Kemp says he has purged the voter rolls to prevent voter fraud, despite the fact that numerous studies have concluded that organized and widespread voter fraud is not a problem

Boeing to warn 737 MAX operators of a potential instrument failure that could cause the jet to nose-dive Originally published November 6, 2018 at 9:04 pm Updated November 7, 2018 at 3:51 pm Boeing’s first 737 MAX 8 rolls out of the final assembly building in Renton in late 2015. More than 200 MAXs are in service around the world. (Mike Siegel / The Seattle Times, file)The Lion Air crash in Indonesia has prompted Boeing to issue a safety warning to all airlines operating the 737 MAX, instructing pilots in what to do if a specific sensor failure arises.Share story

By Dominic Gates Seattle Times aerospace reporter  Following the fatal crash of a Lion Air jet in Indonesia last week, Boeing was preparing Tuesday evening to warn all airlines operating its new 737 MAX of the potential for an instrument failure that could result in the plane entering a dangerous dive, according to a person briefed on the bulletin’s details.The safety warning comes in what’s called a service bulletin that goes out to all operators of the airplane and includes instructions on exactly what pilots should do if the condition arises.[RELATED: FAA follows Boeing’s 737 safety alert with an emergency directive] It’s normal for the Federal Aviation Administration to follow such a warning with an “airworthiness directive” that makes it mandatory, and this is anticipated in the coming days.Lion Air Crash coverage

Investigators looking into the cause of the Lion Air crash, which killed all 189 passengers and crew, have identified a potential failure of a sensor that tells the pilot and the flight control computer the airplane’s “angle of attack,” which is the angle between the wing of the plane and the flow of air it is moving through.A plane will have a high angle of attack when climbing. Too high an angle would cause a stall.The concern caused by the flight pattern and initial investigation of the Indonesian crash is that the sensor may potentially feed false information about this angle to the flight computer, which in turn triggers other errors.In particular, with the sensor falsely indicating that the nose is too high, when it isn’t, it causes an automatic system response that “trims” the horizontal tail of the plane to begin putting the plane’s nose down.At the same time, it causes an indicator of the minimum speed to tell the pilot that the plane is near a stall, which also causes the pilot’s control column to shake as a warning. And the airspeed indicators on both sides of the flight deck disagree.The pilots can use extra force to correct the nose down trim, but the failure condition repeats itself, so that the nose-down push begins again 10 seconds after correcting.“If the nose is trimmed down on an aircraft, it becomes difficult for the crew to hold it,” said the person briefed on Boeing’s bulletin. “The nose is turning itself down and they are having to fight it. It takes a lot of effort to keep it from diving. Especially if you have a crew that’s confused and doesn’t know what’s going on.”This description fits exactly the flight pattern of the Lion Air jet that crashed.For 12 minutes before it crashed, the altitude swung up and down as if the pilots were fighting to maintain height, bringing the plane up, then having it swing down again repeatedly.Boeing statement on service bulletin On its website late Tuesday, Boeing issued this statement:”Boeing is providing support and technical assistance to the Indonesian National Transportation Safety Committee and other government authorities responsible for the investigation into Lion Air flight 610.The Indonesian National Transportation Safety Committee has indicated that Lion Air flight 610 experienced erroneous input from one of its AOA (Angle of Attack) sensors.Whenever appropriate, Boeing, as part of its usual processes, issues bulletins or makes recommendations regarding the operation of its aircraft.On November 6, 2018, Boeing issued an Operations Manual Bulletin (OMB) directing operators to existing flight crew procedures to address circumstances where there is erroneous input from an AOA sensor.The investigation into Lion Air flight 610 is ongoing and Boeing continues to cooperate fully and provide technical assistance at the request and under the direction of government authorities investigating the accident.”[RELATED: Boeing 737 crashed in Indonesia after key sensor replaced] Pilots are typically trained on how to handle a “runaway trim” situation, said the person briefed on the Boeing bulletin, but that’s with everything else working as it should. In this case, the control-column shaking, the stall warning and the air-speed-indicator disagreement all combine to create confusion and keep the pilots very busy.Boeing instructs pilots in the bulletin that if this failure arises, “initially, higher control forces may be needed to overcome any nose-down stabilizer trim.” The instructions go on to say that after the initial stabilization, the automatic trim system on the horizontal tail should be switched off and any trim performed manually.Pilots can turn off the automatic trim system with a cutoff switch operated by the thumb on the central control stand between the two pilots.“This is all coming from the Indonesian crash,” said the person briefed on the Boeing bulletin. “I’m not aware of any other operator having this problem.”More than 200 MAXs are in service around the world. Boeing builds the 737 in Renton, and expects 40 to 45 percent of those built this year to be MAXs, the rest being the previous model.News of the service bulletin was first reported Tuesday evening by Bloomberg News. A Boeing spokesman declined to comment.Dominic Gates: 206-464-2963 or dgates@seattletimes.com; on Twitter: @dominicgates.