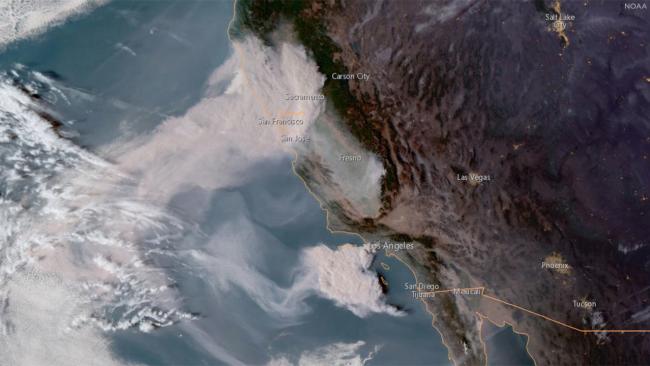 Scroll back up to restore default view.Satellite photos captured by NASA show how large California’s wildfires have become as they continue to burn vast areas of the state.In the photos below, taken from NASA’s Terra satellite on Friday, massive plumes of smoke can be seen drifting over the Pacific Ocean from fires in Northern and Southern California.

The Camp fire in Northern California has devastated the town of Paradise, while the Hill and Woolsey fires have prompted mass evacuations in Ventura County, north of Los Angeles. (NASA)One fast-moving wildfire, known as the Camp fire, likely wiped out the entire town of Paradise, where 27,000 people were forced to evacuate. As of Friday evening, the wind-fueled fire was only 5 percent contained after burning up to 70,000 acres and destroying 6,453 homes. At least nine people have died, with at least five bodies found trapped in vehicles.A fire official told The Associated Press on Friday that Paradise, 90 miles north of Sacramento, was “pretty much” destroyed.In Southern California, brush fires are nearing a community in mourning over a deadly mass shooting late Wednesday at Borderline Bar & Grill in Thousand Oaks. The Woolsey fire, south of Simi Valley, spread to 35,000 acres and is making its way toward the coastal city of Malibu, where a mandatory evacuation was ordered.An estimated 75,000 homes were also evacuated along the borders of Ventura and Los Angeles counties, according to AP.At least 75 percent of Thousand Oaks residents were also evacuated.See NASA’s satellite images below.

The photo taken by NASA on Thursday shows the Camp fire burning through Paradise, California. (NASA)

DON THOMPSON and GILLIAN FLACCUS,Associated Press•November 10, 2018 Wildfire destroys thousands of buildings in Northern CaliforniaPARADISE, Calif. (AP) — A fierce wildfire in Northern California incinerated most of a town of about 30,000 people with flames that moved so fast there was nothing firefighters could do, authorities said Friday. Nine people died in what quickly grew into the state’s most destructive fire in at least a century.Only a day after it began, the blaze near the town of Paradise had grown to nearly 140 square miles (362 square kilometers), had destroyed more than 6,700 structures — almost all of them homes — and was burning completely out of control.”There was really no firefight involved,” Capt. Scott McLean of the California Department of Forestry and Fire Protection said, explaining that crews gave up attacking the flames and instead helped people get out alive. „These firefighters were in the rescue mode all day yesterday.”With fires also burning in Southern California , state officials put the total number of people forced from their homes at about 250,000. Evacuation orders included the entire city of Malibu, which is home to 13,000, among them some of Hollywood’s biggest stars.

When Paradise was evacuated, the order set off a desperate exodus in which many motorists got stuck in gridlocked traffic and abandoned their vehicles to flee on foot. People reported seeing much of the community go up in flames, including homes, supermarkets, businesses, restaurants, schools and a retirement center.

Rural areas fared little better. Many homes have propane tanks that were exploding amid the flames. „They were going off like bombs,” said Karen Auday, who escaped to a nearby town.

McLean estimated that the lost buildings numbered in the thousands in Paradise, about 180 miles (290 kilometers) northeast of San Francisco.

„Pretty much the community of Paradise is destroyed. It’s that kind of devastation,” he said.

While the cause of the fire wasn’t known, Pacific Gas & Electric Company told state regulators it experienced an outage on an electrical transmission line near Paradise about 15 minutes before the blaze broke out. The company said it later noticed damage to a transmission tower near the town. The utility’s filing was first reported by KQED News.

The wind-driven flames also spread to the west and reached Chico, a city of 90,000 people. Firefighters were able to stop the fire at the edge of the city, Cal Fire Cpt. Bill Murphy said.

There were no signs of life Friday on the road to Paradise except for the occasional bird chirp. A thick, yellow haze from the fire hung in the air and gave the appearance of twilight in the middle of the day.

Strong winds had blown the blackened needles on some evergreens straight to one side. A scorched car with its doors open sat on the shoulder.

At one burned-out house, flames still smoldered inside what appeared to be a weight room. The rubble included a pair of dumbbells with the rubber melted off and the skeletons of a metal pullup bar and other exercise equipment. The grass and elaborate landscaping all around the brick and stucco home remained an emerald green. Red pool umbrellas were furled near lounge chairs and showed not a singe on them.

Evacuees from Paradise sat in stunned silence Friday outside a Chico church where they took refuge the night before. They all had harrowing tales of a slow-motion escape from a fire so close they could feel the heat inside their vehicles as they sat stuck in a terrifying traffic jam.

When the order came to evacuate, it was like the entire town of 27,000 residents decided to leave at once, they said. Fire surrounded the evacuation route, and drivers panicked. Some crashed and others left their vehicles by the roadside.

„It was just a wall of fire on each side of us, and we could hardly see the road in front of us,” police officer Mark Bass said.

Officials said all the victims were found in Paradise, including four who died inside their vehicles.

A nurse called Rita Miller on Thursday morning, telling her she had to get her disabled mother, who lives a few blocks away, and flee Paradise immediately. Miller jumped in her boyfriend’s rickety pickup truck, which was low on gas and equipped with a bad transmission. She instantly found herself stuck in gridlock.

„I was frantic,” she said. After an hour of no movement, she abandoned the truck and decided to try her luck on foot. While walking, a stranger in the traffic jam rolled down her window and asked Miller if she needed help. Miller at first scoffed at the notion of getting back in a vehicle. Then she reconsidered, thinking: „I’m really scared. This is terrifying. I can’t breathe. I can’t see, and maybe I should humble myself and get in this woman’s car.”

The stranger helped Miller pack up her mother and took them to safety in Chico. It took three hours to travel the 14 miles.

Concerned friends and family posted anxious messages on Twitter and other sites, saying they were looking for loved ones, particularly seniors who lived at retirement homes or alone.

About 20 of the same deputies who were helping to find and rescue people lost their own homes, Sheriff Kory Honea said.

„There are times when you have such rapid-moving fires … no amount of planning is going to result in a perfect scenario, and that’s what we had to deal with here,” Honea told the Action News Network.

Kelly Lee called shelters looking for her husband’s 93-year-old grandmother, Dorothy Herrera, who was last heard from Thursday morning. Herrera, who lives in Paradise with her 88-year-old husband, Lou, left a frantic voicemail around 9:30 a.m. saying they needed to get out.

„We never heard from them again,” Lee said. „We’re worried sick. … They do have a car, but they both are older and can be confused at times.”

For one desperate day, Dawn Johnson anxiously waited for news of her father Richard Wayne Wilson and his wife, Suzanne, who lived in an RV park in Paradise that burned. The couple moved from Texas to the California foothill town about a year ago and was probably not prepared for wildfires.

They lived in an RV park in the California foothill town and were unlikely equipped to evacuate. He has late-stage cancer and she is mostly confined to her bed, she said.

Johnson, of Independence, Oregon, relied on fellow members of the couple’s Jehovah’s Witnesses congregation to check local shelters. By Friday afternoon, she learned they had been found in nearby Chico.

This story has been amended to correct the last name of missing couple.

Nine people have been burned to death as California’s most destructive fire in at least a century engulfed the town of Paradise, while celebrities fled fast-moving fires in the south of the state.

Only a day after it began the so-called „Camp Fire” spread to over 140 square miles in size and levelled the town, which has a population of 30,000. More than 2,000 firefighters were battling the blaze, which destroyed more than 6,700 homes and businesses.

Captain Scott McLean, of the California Department of Forestry and Fire Protection, said: „Pretty much the community of Paradise is destroyed. It’s that kind of devastation.

„There was really no firefight involved, these firefighters were in the rescue mode all day yesterday.”

He said thousands of buildings had been lost in Paradise, about 180 miles northeast of San Francisco.

Jody Jones, the mayor of Paradise, said the hospital, a McDonald’s restaurant, and many other businesses had been engulfed.

She said: „I think we lost a high school and at least one of the elementary schools.”

Residents evacuated in panic with some crashing their cars.

Mark Bass, a police officer, said the evacuation was „just a wall of fire on each side of us, and we could hardly see the road”.

Officials said all the victims were found in Paradise, including four who died inside their vehicles.

With fires burning in both Northern and Southern California 157,000 people have been evacuated, including much of the city of Malibu.

Among the evacuees was Kim Kardashian West, the reality television star, who was forced to flee her Southern California home in Calabasas, near Los Angeles.

Kardashian West posted on social media a video from an aircraft window showing fires raging below.

She shared another video along with the caption: „Pray for Calabasas. Just landed back home and had 1 hour to pack up & evacuate our home. I pray everyone is safe.”

She also posted a clip from the ground showing fire fighters driving past.

Smoke from the fire could be seen from the site of a mass shooting in nearby Thousand Oaks that left 12 people dead on Wednesday night.

Caitlyn Jenner’s home in Malibu burned down, TMZ reported, although her publicist said that had not been confirmed. The reality TV star had already evacuated.

Cher, who said she had lived in Malibu since 1972, tweeted that the wildfire was coming close to her home, although she said she was not on the property.

„Friends houses have burned. I can’t bear the thought of there being no Malibu,” the singer posted.

Lady Gaga posted a video on her Instagram account saying she had evacuated her Malibu home on Friday, and showing images of dark billowing smoke overhead.

„Bleak House and the collection may be endangered but the gift of life remains,” tweeted del Toro, director of Oscar best picture winner „The Shape of Water.”

Orlando Bloom tweeted a photo from his street showing the wildfire.

The Paramount Ranch, a Hollywood filming location for decades that was recently used by the HBO series „Westworld”, was also destroyed.

The ranch served as a location for productions ranging from 1938’s „The Adventures of Marco Polo” to TV shows „The Mentalist” and „Weeds.” The set in the mountains west of Los Angeles dates to 1927 when Paramount Pictures leased the ranch and began making films there.

Actress Alyssa Milano said her home was „in jeopardy” amid her attempts to safely evacuate her five horses. The actress ultimately got the help she needed and tweeted that her horses were safe. „My children are safe. … Everything with a heartbeat is safe.”

The entire 12,000 population of Malibu, which stretches 27 miles along the Pacific Ocean, was placed under mandatory evacuation on Friday.