Doyle Rice,USA TODAY•February 28, 2019Hail storm hit Los Angeles amid cold blast Rivers swollen by days of heavy rain inundated portions of northern California on Wednesday, forcing hundreds of people to flee their homes.However, about half of the 4,000 people ordered to leave have refused to do so. „We want you to leave now,” Sonoma County Sheriff Mark Essick urged. „The roads may become impassable and you may not be able to get out.”Those who decided to stay stocked up on food and drinking water.Two towns – Guerneville and Monte Rio – were islands surrounded by water, local officials said. The only way to reach the two communities now is by boat.

The swollen Russian River topped 32 feet Tuesday evening and it could crest at more than 46 feet by Wednesday night, which would be its highest level in about 25 years, according to the National Weather Service.More: More rain, snow expected in storm-battered California, following days of mudslides and floodsThe weather service issued flood warnings throughout the Sacramento Valley on Tuesday as tame roadside gullies boiled angrily with runoff, and creeks rushed over roads in some areas.

Sycamore Court resident Jesse Hagan evacuates to higher ground in the apartment complex in lower Guerneville, Calif., Tuesday, Feb. 26, 2019. The town of Guerneville and some two dozen other communities are at risk of flooding from the Russian River north of San Francisco.“It’s been mainly the small streams that have been running really high,” said meteorologist Craig Shoemaker at the weather service office in Sacramento. Parts of northern California scarred by last year’s devastating wildfires are especially vulnerable to flooding, he said. 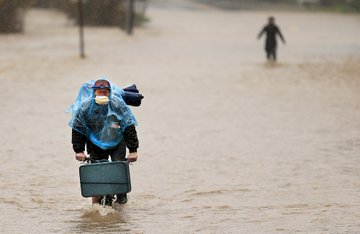 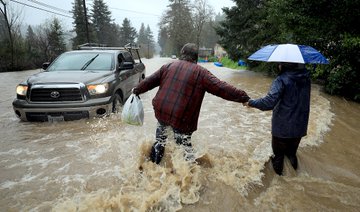 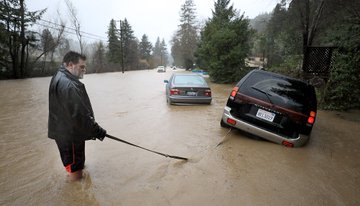 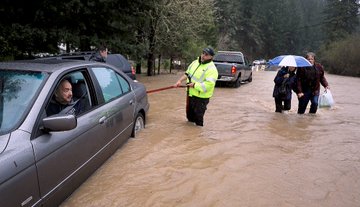 Kent Porter@kentphotos Russian River resident grappling with another #atmosphericriver in Guerneville, Tuesday morning @NorthBayNews @NWSBayArea #fllod #sonomacounty #castorm #cawx One rain gauge in Shasta County near Lassen National Park has picked up over 20 inches of rain in the past few days, the weather service said. Heavy snow in the Sierra Nevada will continue, the weather service said, and „an additional 1 to 3 feet of snow is possible there through Friday morning.” Mount Shasta Ski Park, about 185 miles north of Sacramento, was closed Tuesday as park officials shoveled the resort out from under the dumping of snow it received over the past day. 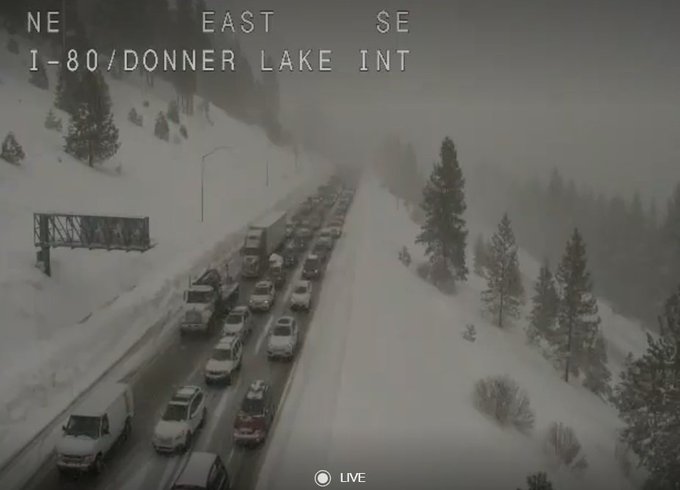 Caltrans District 3@CaltransDist3 Traffic on Interstate 80 is now CLOSED from the Nevada state line to Colfax due to traction control issues, multiple spinouts. No ETO. @CHP_Truckee @CHPAuburn 11:12 PM – Feb 26, 2019„We have not experienced this amount of snow in such a short span in a long time,”  the park posted on Facebook Tuesday morning. „We have received 40 inches of snow in the last day and we are expecting 20 inches more today.”The snow has already buried other parts of the Northwest: Officials in rural western Montana are prepared to rescue nearly 50 snowed-in residents of Cascade County if they need help.Contributing: The Associated Press; The (Redding, Calif.) Record Searchlight

A fire is seen burning on Saddleworth Moor near Diggle
A fire is seen burning on Saddleworth Moor near the town of Diggle, Britain, February 27, 2019. REUTERS/Jon Super By Jon Super DIGGLE, England (Reuters) – Firefighters battled a series of wildfires in Britain on Wednesday, including a large moorland blaze outside the northern English city of Manchester, as the country experienced its warmest winter weather on record.A fire started on Tuesday evening on Saddleworth Moor, an expanse of hills that is popular with hikers. It has since spread to an area about one-and-a-half square kilometers.Large flames could be seen rising from the hillside as witnesses described „apocalyptic” scenes.Laura Boocock, West Yorkshire Fire Service’s incident commander, told the BBC it was „one of the biggest moorland fires we’ve ever had to deal with”.Five crews and two specialist moorland firefighting units were trying to contain the blaze. There have been no reports of any injuries.The fire comes after Britain recorded its warmest winter day with a temperature of 21.2 Celsius in Kew Gardens in London.Fire officials have not yet commented on what may have caused the blaze.Last summer a fire on Saddleworth Moor, which required army assistance to tackle, took more than three weeks to extinguish.Separately, on Tuesday a wildfire started in woodland made famous in AA Milne’s Winnie the Pooh stories.Ashdown Forest in East Sussex, the inspiration for Milne’s Hundred Acre Wood, suffered two fires that began within an hour of each other.The local fire service said that „unusual warm weather this week” meant that the ground was drier than usual and could lead to a greater risk of outdoor fires.In Scotland, firefighters battled through the night to extinguish a large gorse fire on Arthur’s Seat in Edinburgh.(Writing by Andrew MacAskill; Editing by Andrew Heavens)