Authorities have confirmed a tornado with winds up to 130 mph (209 kph) touched down in southern Oklahoma.

The National Weather Service says the EF2 twister Saturday morning traveled for about a half a mile in Geronimo, about 80 miles (129 kilometers) southwest of Oklahoma City, damaging two homes and sending one injured person to the hospital as a precaution.

They’re also investigating reported wind damage in the southeast and north of the state.

In northwest Arkansas, a state official said multiple people are stranded on recreational trails due to downed trees.

Meanwhile, energy companies for both states are reporting tens of thousands of people are without power.

Arkansas officials say suspected tornadoes have damaged homes, downed trees and cut power to some areas in the western part of the state.

Melody Daniel, spokeswoman for the state’s emergency management department, says fallen trees have blocked all lanes of traffic on Route 64 in northwestern Arkansas, while a possible tornado in Fort Smith has caused roof damage to „numerous” homes.

In Paris, about 600 homes as well as the county’s emergency dispatch office have lost power, but Daniel says the office has redundancies to provide dispatch services.

A spate of tornadoes raked across the Southern Plains, leaving damage and causing few injuries, and parts of the region were bracing for more severe thunderstorms and possible flooding.

Tornadoes touched down Friday in Kansas and rural parts of Nebraska, tearing up trees and powerlines, and damaging some homes and farm buildings, according to the National Weather Service. More twisters destroyed at least two homes and left one person with minor injuries in southwestern Oklahoma early Saturday, KWTV television reports.

Forecasters warned of heavy rain, lightning, pingpong ball-sized hail and flooding as a line of storms moves west to east through afternoon, covering an area from south of Killeen, Texas, to north of the Oklahoma state line.

DALLAS (AP) — A spate of tornadoes raked across the Southern Plains, leaving damage and causing few injuries, and parts of the region were bracing for more severe thunderstorms and possible flooding.

The National Weather Service confirmed an EF2 twister Saturday morning with winds up to 130 mph (209 kph) that destroyed at least two homes and left one person with minor injuries in southwestern Oklahoma.

A suspected tornado caused roof damage to „numerous” homes in northwestern Arkansas, a state official said, and severe winds downed trees and power lines across a highway, blocking all lanes.

Energy companies in Oklahoma and Arkansas reported tens of thousands of customers were without power Saturday afternoon.

Tornadoes touched down Friday in Kansas and rural parts of Nebraska, tearing up trees and powerlines, and damaging some homes and farm buildings, according to the National Weather Service.

In Abilene, Texas, a city 150 miles (240 kilometers) west of Fort Worth, strong winds prompted the evacuation of a nursing home and left numerous homes and businesses damaged, according to the Abilene Reporter-News . A spokeswoman for the city said no deaths or serious injuries were reported.

The National Weather Service issued a tornado watch until 8 p.m. Saturday for the western half of Arkansas. Portions of North Texas also were under a tornado watch and a flash flood warning was issued in the Dallas area Saturday afternoon.

Forecasters warned of heavy rain, lightning, pingpong ball-sized hail and flooding as a line of storms moves west to east through afternoon, covering an area from south of Killeen, Texas, to north of the Oklahoma state line.

In Oklahoma City, thunderstorms prevented workers from securing and removing glass from Devon Tower, which was damaged Wednesday when a scaffolding holding two window washers banged against the building, The Oklahoman reported. Officials said the rain and winds blew broken glass from the tower and compromised the integrity of other panes.

From golf ball-sized to softball-sized: What we know about hail
USA TODAY 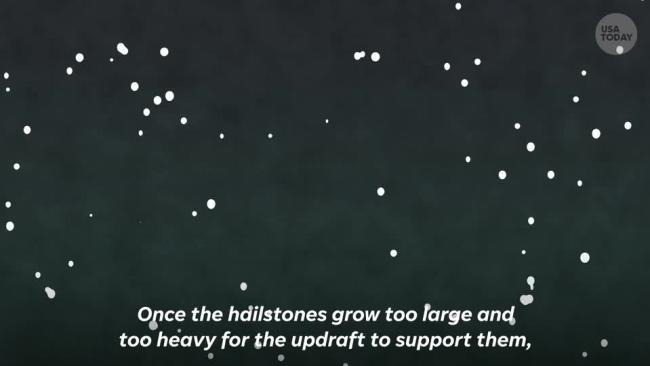 At least three tornadoes touched down in West Texas and Oklahoma Saturday, damaging a high school southwest of Fort Worth as a slow-moving, 1,400-mile line of severe weather pounded Tornado Alley along a northeast trajectory.

At one point Saturday afternoon, the line of severe storms stretched from Sonora, Texas, in deep West Texas, to Green Bay Wisconsin, pounding a string of cities including Fort Worth, Oklahoma City, Kansas City and Des Moines.

The first twister damaged a baseball stadium just outside the town of Ballinger, about 200 miles southwest of Fort Worth, demolishing one home and injuring at least one person, according to the National Weather Service Storm Prediction Center.

It also touched down in the town of Baillinger, damaging a country club and high school. It continued to snap trees and power lines as it skipped through the county.

The line of storms was poised to rake Fort Worth and Dallas as it snaked its way northeast across Tornado Alley.

„The potential for significant severe wind gusts will exist as storms merge into a fast-moving line,” the SPC warned.

Saturday was expected to be one of the worst periods for the Texas-Oklahoma area from a multi-day storm threat forecast for Tornado Alley, which spans from Texas to South Dakota. The storm was forecast to slam the area again Monday and Tuesday.

The SPC posted over 30 preliminary tornado reports in Nebraska and Kansas on Friday as the violent weather took hold.

The fierce weather is being triggered by a high-energy system sweeping in from the Pacific and clashing with warm, humid Gulf Coast air.

AccuWeather meteorologists warn of the likelihood of hailstones so large they could cause serious injury, kill livestock and inflict substantial property damage.

Around 6:45 p.m. ET on Friday, a tornado touched down near McCook, Nebraska, AccuWeather reported. The National Oceanic and Atmospheric Administration Storm Prediction Center reported tree and power line damage along with minor damage to a farm, the Weather Service reported.

As the storm tracked northeast, it spun up rare twin tornadoes near Farnam, Nebraska, around 8:26 p.m. ET. Storm center said the twisters knocked down tress and power lines, forcing police to close one roadway.

AccuWeather Extreme Meteorologist Reed Timmer was reporting from Nebraska for the AccuWeather Network and intercepted a tornado on foot near McCook, Nebraska, losing his hat in the process.

The threat area is almost a textbook description of traditional Tornado Alley.

The SPC highlighted a risk area for severe weather through Tuesday at least.

Earlier this week, the threat area was on the map for 8 straight days.

People from central Texas to across Mississippi valley are facing a strong chance of severe storms with strong winds, large hail and even tornadoes, while in the Midwestern plains, heavy rains are expected to worsen what the NOAA has described as “unprecedented” flooding in the region.

AccuWeather meteorologist Tyler Roys tells TIME that the severe weather started in parts of Texas and Oklahoma with thunderstorms, damaging wind and localized flooding on Saturday; parts of Texas also reported several tornadoes. Meanwhile, rain in the midwestern Plains – including South Dakota, Wisconsin and Missouri – is expected to continue until Tuesday, exacerbating the ongoing flooding.

Tornadoes were reported at around 6 a.m. CT in Abilene and San Angelo, Texas, Roys says. A tornado appears to have hit a baseball stadium Runnels County, Texas, although experts are still assessing the extent of the damage.

The storm is expected to move to northeast Texas and Arkansas at around 2 p.m. or 3 p.m. on Saturday afternoon. The areas are expected to experience flash flooding, large, damaging hail, and possibly tornadoes until about 12 a.m. on 1 a.m. on Sunday. The National Weather Service warned on Twitter that Arkansas may experience up to “ping pong” size hail. 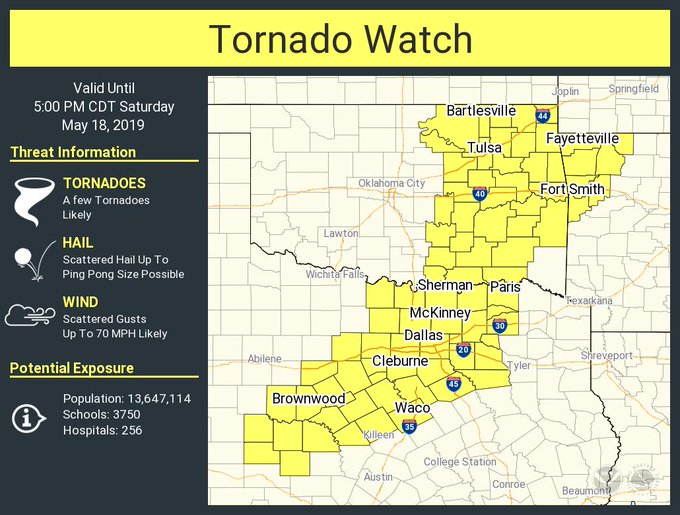 A tornado watch has been issued for parts of Arkansas, Oklahoma and Texas until 5 PM CDT

The midwestern plains from eastern South Dakota and Wisconsin to southern Missouri, which are facing ongoing problems with flooding, are expected to receive upwards of 10 inches of rain. Roys warns that the rain could “prolong” the flooding.

“These storms are not helping it at all,” Roys says.

From the late morning to the afternoon on Sunday, severe storms are expected to reach the west central Ohio Valley, Chicago, Detroit and down to Louisville. These areas are expected to experience damaging, strong wind and hail.

Early next week, the central plains and mid Mississippi Valley will bear the brunt of severe weather. They’re likely to face large, damaging hail, flash flooding, wind gusts up to 80 miles per hour – and possibly tornados.