Following forecasts for dangerous weather, 15 tornadoes swept through five states on Monday, according to preliminary reports from the Storm Prediction Center.

Tornadoes in sparsely populated areas damaged homes and barns in Oklahoma, but no injuries have been reported. At least 2 million people were said to be in the path of possible tornadoes into the evening.

Preliminary reports show 15 tornadoes had spawned in Texas, Oklahoma, Kansas, Missouri and Arizona since Monday morning, as of 9:55 p.m. EST.

One afternoon tornado hit parts of the southwestern Oklahoma town of Mangum. Glynadee Edwards, the Greer County emergency management director, said roofs of homes were damaged and the high school’s agriculture barn was destroyed. The livestock survived, however.

“The pigs are walking around wondering what happened to their house,” she said.

Severe weather: ‘All the windows exploded, it was just chaos’

Floods to wildfires: Is global warming to blame?

Another tornado severely damaged a house and destroyed a barn in the northern Oklahoma unicorporated community of Lucien.

The prediction center placed parts of the eastern Texas Panhandle and western Oklahoma under a „high risk” area for severe weather, the most serious of SPC’s five risk categories.

The entire Oklahoma City metro area was within the „high risk” area.

„I’d certainly label this the ‘nightmare scenario,'” meteorologist Mike Smith tweeted, with a display of the storms that are predicted for later Monday.

The midday forecast from SPC has increased the tornado probabilities from 30% to 45% from northwest Texas into central Oklahoma. This means there’s a 45% chance of a tornado forming within 25 miles of any spot in the area.

The last time a 45% tornado outlook was issued was before an outbreak in Oklahoma and Kansas on April 14, 2012, when 122 tornadoes formed, killing 6 people.

Schools closed across Oklahoma ahead of the bad weather. Many of the largest school systems in the center of the state (as well as the University of Oklahoma campus) closed all day Monday, which appears to be the first time such a mass closure has occurred in central Oklahoma on the night before severe weather, according to the Weather Underground.

Tinker Air Force Base near Oklahoma City evacuated several planes to other military installations in anticipation of storm damage.

Atmospheric scientist Roger Edwards tweeted Monday that “this is the rare kind of event that may take many lives. Pray I’m wrong.” 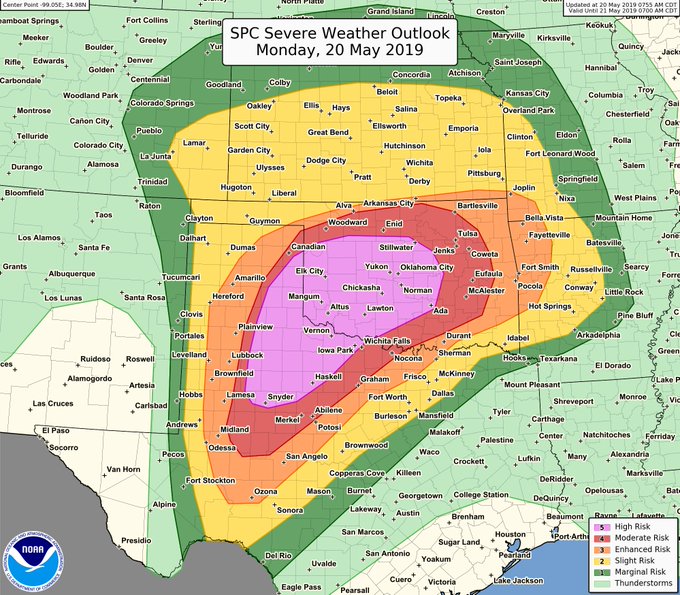 The wild weather Monday will continue a pattern of severe storms that have battered the region: Nearly 40 preliminary tornadoes were reported across Nebraska and Kansas to end this past week, and the severe weather continued on Saturday, AccuWeather said.

Forecasters say four tornadoes struck parts of West Texas in severe weather that damaged some homes and businesses in the San Angelo area on Saturday, the National Weather Service said.

Looking ahead, more bad weather is forecast the rest of the month for the central U.S.: „It looks like there is no end in sight to this very active pattern of severe weather into the end of May,” AccuWeather Extreme Meteorologist Reed Timmer said.

High heat will also be another big weather story as May continues: As the Memorial Day weekend rolls in, look for a „death ridge” of heat in the Southeast, forecasters warned.

OKLAHOMA CITY (AP) — An intense storm system moved across the Southern Plains on Monday, spawning tornadoes that caused scattered damage and a deluge of rain but not the „particularly dangerous” twisters that forecasters had feared.

Late Monday, the National Weather Service reduced severe threat of violent storms to a small area of southern Oklahoma and northern Texas. But it kept an area stretching from Tulsa, Oklahoma, to Wichita Falls, Texas, under tornado watch — the level of threat just below a tornado warning — until 5 a.m. CDT Tuesday morning

The biggest threat overnight appeared to be flash flooding from torrential rains that accompanied the storms, forecasters said.

The National Weather Service had warned that Monday evening could bring perilous weather to a large swath of western Texas, most of Oklahoma and southern Kansas. The storm was expected to move later Monday into western Arkansas.

As predicted, more than a dozen sightings of tornadoes were reported in Oklahoma, Kansas, Texas and Missouri early Monday evening, although they were in sparsely populated areas. Oklahoma residents were particularly nervous Monday because it was the sixth anniversary of a massive tornado in Moore, south of Oklahoma City, that killed 24 people.

A tornado struck western and northern portions of the southwestern Oklahoma town of Mangum on Monday afternoon. Glynadee Edwards, the Greer County emergency management director, says some homes incurred roof damage and the high school’s agriculture barn was destroyed, but the livestock survived.

„The pigs are walking around wondering what happened to their house,” she said.

National Weather Service meteorologist John Pike in Norman, Oklahoma, said a developing layer of relatively warm air aloft late Monday afternoon and evening over central Oklahoma was capping development of the kind of supercells that spawned tornadoes earlier in the afternoon in western and northern Oklahoma. Storm cells that did develop, however, followed one after the other in what is called „training,” leading to scattered reports of flash flooding Monday night.

The Storm Prediction Center website shows the main severe thunderstorm threat Tuesday will be over Missouri and northern Arkansas, with a slight threat in a surrounding area bounded by Dallas; Springfield, Illinois; Garden City, Kansas; and Oklahoma City.

The threat of nasty weather had prompted measures to prepare for the worst. School districts in Oklahoma City, nearby Norman and elsewhere in Oklahoma canceled classes with forecasts of hail and wind gusts of up to 80 mph (128 kph). A flood watch was in effect for the greater Oklahoma City region. Schools in Abilene and elsewhere in West Texas sent students home early.

Oklahoma Gov. Kevin Stitt said in a statement that the state emergency operations center was activated and urged motorists not to drive around barricades or into flooded roadways.

In Oklahoma City, emergency management officials opened the Multi-Agency Coordination Center, an underground bunker on the city’s northeast side that serves as a clearinghouse for coordinating information about severe weather events and other major emergencies.

Some flights at Will Rogers World Airport in Oklahoma City were canceled to avoid damage to aircraft and the possibility of extended delays elsewhere.

The Monday storms followed a spate of tornadoes in the Southern Plains on Friday and Saturday, leaving widespread damage and some people injured.

The National Hurricane Center on Monday tweeted that Andrea had a „well-defined center” with maximum sustained winds of about 40 mph (64 kph). It said in an advisory Monday evening that the storm is centered about 335 miles (540 kilometers) southwest of Bermuda in the western Atlantic and moving northward at 14 mph (22 kph).

Although there are no coastal watches or warnings in effect, the Miami-based center says people in Bermuda should monitor the storm’s progress for the next few days. Meteorologists say the storm could strengthen a little overnight but is expected to weaken late Tuesday and dissipate on Wednesday.

More than two million people in Oklahoma and the Texas Panhandle are in harms way after the National Weather Service’s Storm Prevention Centre announced a threat level-five warning – their highest – for violent tornadoes as well as warnings for significant hail and flooding lasting into Monday night.

They’ve also designated the storm a ‘Particularly Dangerous Situation’ or PDS, their most dire classification. This is the first time in two years that the National Weather Service has issued such high warnings for a storm.

According to the SPC, the probability of all three weather types is 95%. The only other storm to have had such high probabilities in the SPC’s history, was an Alabama storm in 2011, the centre pointed out. Marble-sized hail has already been reported in Oklahoma and baseball sized hailstones are a possibility.

In anticipation of the storm Oklahoma City and Tulsa, Oklahoma, closed down schools for the day, while Tinker Air force Base evacuated some of its aircraft, CNN reported.

Veteran storm chaser Mike Smith cautioned others against braving the storm. „To: #StormChasers, I believe I am the only one of the original, 1972, chasers still chasing. But, I will not be out today. It is too dangerous. The tornadoes will be difficult to see and too dense & flooding could cut off escapes.” he wrote in a tweet.

The storm comes on the 6th anniversary of the 2013 Moore tornado that killed 24, including 9 children, in the town of Moore, Oklahoma.

Over the weekend 52 other tornadoes hit seven states across the country. 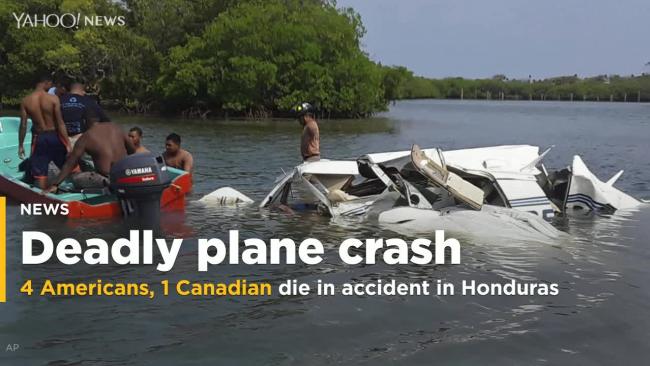 TEGUCIGALPA, Honduras (AP) — Four Americans and a Canadian pilot were killed when a small plane went down off the coast of Roatan island in Honduras, officials said Sunday.

Armed Forces spokesman Jose Domingo Meza confirmed the nationalities of those who died in Saturday’s crash.

The Piper Cherokee Six plummeted into the Atlantic shortly after takeoff from the popular tourist destination of Roatan en route to the port of Trujillo. The military said in a statement that rescue boats with police divers and firemen recovered four bodies within minutes of the crash, and transported another to a hospital, where he died shortly after of internal injuries.

The U.S. State Department also confirmed the deaths of four U.S. citizens and Global Affairs Canada confirmed that a Canadian also had died. They did not release names.

Honduran authorities identified the pilot as Patrick Forseth, a Canadian national who developed tourism projects in the Trujillo Bay area.

Forseth was involved in a legal dispute with Afro-indigenous Hondurans who accused him of trying to develop their ancestral lands into vacation properties for international tourists. Forseth defended his company in a 2017 statement, saying it had purchased the land in 2013 and had made several attempts to reach an amicable resolution.

FORT MYERS, Fla. – A second dolphin in a month died on a Florida beach with a bellyful of trash.

This time, the male bottlenose, which stranded May 7, had eaten a 24-inch-long plastic shower hose – complete with nozzle and metal radiator clamp – that looks to be from a camping rig.

Last month, a female rough-toothed dolphin calf who’d also washed up on Fort Myers Beach was found to have two plastic bags and a balloon fragment in her stomach.

Although the garbage is „a significant finding,” according to an institute Facebook post, „there are many additional factors to consider before a final cause of stranding and death for the dolphin can be determined. Samples collected during necropsy will be sent for analysis to help with this determination.”

The post goes on to urge people to take responsibility for trash and participating in clean-ups. It also points out that „Marine mammals strand for a reason, often the animals are sick or injured. … Please don’t push the animal back into the water as it can delay examination and treatment and often results in the animal re-stranding in worse condition.”

March 18: A whale died with 88 pounds of plastic in its belly: ‘Action must be taken’