News  ‘Nowhere for the water to go’: Tornadoes, floods hit central US day after 20 tornadoes 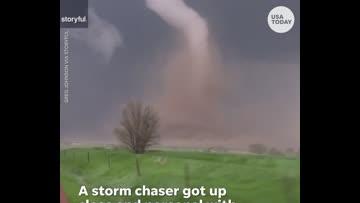 Strong winds, downpours and at least one tornado battered the central U.S. Tuesday, a day after more than 20 tornadoes rolled through the region.

Still more severe storms – with large hail the greatest threat – were forecast for Wednesday, the Storm Prediction Center said, from Texas to the Great Lakes. Eastern Kansas and western Missouri were the areas at highest risk for the foul weather.

On Tuesday, flooding led to high-water rescues in Oklahoma and a tornado roared near Tulsa International Airport.

One person was injured as travelers were briefly moved to shelters and some flights were canceled.

Severe weather: ‘All the windows exploded, it was just chaos’

Floods to wildfires: Is global warming to blame?

„All the ponds and all the creeks are completely full,” he said. „There is nowhere for the water to go.”

In Texas, high winds and storms forced Dallas/Fort Worth International Airport to alter traffic patterns, causing some arriving flights to be delayed an average of 1 hour and 36 minutes.

A tornado was also reported in the Springfield, Missouri, area on Tuesday afternoon, the National Weather Service said.

Looking ahead, after a stormy Wednesday, more bad weather is forecast for the rest of the month for the central U.S.: „It looks like there is no end in sight to this very active pattern of severe weather into the end of May,” AccuWeather Extreme Meteorologist Reed Timmer said.

While storms continue to batter the central U.S., extreme heat will be the main weather story in the Southeast for the next several days. Record-breaking high temperatures, some nearing 100 degrees, are possible in several states from Alabama to Virginia.

Tornadoes in sparsely populated areas damaged homes and barns in Oklahoma on Monday, but no injuries were reported. In the southwestern Oklahoma town of Mangum. Glynadee Edwards, the Greer County emergency management director, said roofs of homes were damaged and the high school’s agriculture barn was destroyed. The livestock survived, however.

“The pigs are walking around wondering what happened to their house,” she said.

Another tornado severely damaged a house and destroyed a barn in the northern Oklahoma unincorporated community of Lucien.

Schools closed across Oklahoma ahead of the bad weather. Many of the largest school systems in the center of the state (as well as the University of Oklahoma campus) closed all day Monday, which appears to be the first time such a mass closure has occurred in central Oklahoma on the night before severe weather, according to Weather Underground.

The severe weather this week comes after a string of wild-weather days across the Midwest last week, when at least 50 reports of tornadoes were logged across the central and southern Plains, AccuWeather said.

This article originally appeared on USA TODAY: ‘Nowhere for the water to go’: Tornadoes, floods hit central US day after 20 tornadoes

1 / 4
Deer roam the foothills of Ken Caryl Valley near Littleton, Colo., after a late spring storm blanketed the area with snow, seen Tuesday morning, May 21, 2019. Colorado and Wyoming got an unusually late dump of snow this week. Large swaths of California have seen two to five times more precipitation than is normal for this point in May, the National Weather Service said. (Adriana Wiersma via AP)

LOS ANGELES (AP) — California growers are frustrated by an unusually wet spring that has delayed the planting of some crops like rice and damaged others including strawberries and wine grapes.

The state’s wet conditions come as much of the West is experiencing weird weather. Colorado and Wyoming got an unusually late dump of snow this week. Meanwhile temperatures in Phoenix have dropped 15 degrees below normal.

Large swaths of California have seen two to five times more precipitation than is normal for this point in May, the National Weather Service said. A series of storms soaked much of Colusa County where rice grower Kurt Richter was forced to wait weeks to seed his land.

„You should be seeing green lawns of rice out there right now,” Richter said Tuesday from his farm about 120 miles (195 kilometers) north of San Francisco. „But it’s just flooded fields, with nothing sticking out of the water.”

Rice he managed to get into the ground during brief dry spells is in a „refrigerated state” because of colder than usual temperatures that threaten to reduce yields, he said. Richter’s property typically grows about 5,000 acres (2,000 hectares) of rice annually, but he predicted „we won’t even get close to that this year.”

In a 24-hour period last weekend, parts of Sacramento County in the northern part of the state recorded more than 3.25 inches (8.25 centimeters) of rain. The wet trend will continue through the month, forecasters said.

Strawberry grower Peter Navarro said it’s been at least a decade since heavy rains have affected his Santa Cruz County fields like this year.

„The month of May produces some of your best berries,” said Navarro, grower for Well-Pict Berries in Watsonville. But he told the Santa Cruz Sentinel that ongoing wet weather was disrupting the picking schedule and causing a loss of production.

Too much rain can damage strawberries’ delicate skin, causing the fruit to decay before being picked. Berries that start to rot on the vine can affect green fruit and bring disease to the plant, Navarro said.

To the south in wine country, May showers and accompanying winds have damaged some vines and brought unwelcome moisture that could delay blooming. On top of that growers worry lingering humid conditions will cause mold and mildew on vines that could take an even greater toll.

The result could be a smaller yield for certain varieties including chardonnay and pinot noir grapes, vintners said.

„It’s not ideal,” Alison Crowe, director of winemaking at Plata Wine Partners in Napa, told the Santa Rosa Press-Democrat . „It’s not necessarily impacted quality. It will impact the quantity.”

Lines were long at Denver International Airport Tuesday morning with travelers from earlier canceled flights hoping to fly out. The airport got 3.4 inches (8.6 centimeters) of snow but some areas near Colorado Springs got a foot (0.3 meters) or more. May snowfall is fairly common but usually not this late.

Up to 9 inches (22.8 centimeters) of snow was reported in the Cheyenne, Wyoming area.

In Arizona, where 100 degree (37.75 Celsius) temperatures are not uncommon in May, some areas in the northern part of the state saw snow this week. It was a moderate 81 degrees (27 Celsius) by mid-afternoon Tuesday in Phoenix.

OKLAHOMA CITY (AP) — An intense storm system moved across the Southern Plains on Monday, spawning tornadoes that caused scattered damage and a deluge of rain but not the „particularly dangerous” twisters that forecasters had feared.

Late Monday, the National Weather Service reduced the severe threat of violent storms to a small area of southern Oklahoma and northern Texas. But it kept an area stretching from Tulsa, Oklahoma, to Wichita Falls, Texas, under tornado watch — the level of threat just below a tornado warning — until 5 a.m. CDT Tuesday morning

The biggest threat overnight appeared to be flash flooding from torrential rains that accompanied the storms, forecasters said.

The National Weather Service had warned that Monday evening could bring perilous weather to a large swath of western Texas, most of Oklahoma and southern Kansas. The storm was expected to move later Monday into western Arkansas.

As predicted, more than a dozen sightings of tornadoes were reported in Oklahoma, Kansas, Texas and Missouri early Monday evening, although they were in sparsely populated areas. Oklahoma residents were particularly nervous Monday because it was the sixth anniversary of a massive tornado in Moore, south of Oklahoma City, that killed 24 people.

A tornado struck western and northern portions of the southwestern Oklahoma town of Mangum on Monday afternoon. Glynadee Edwards, the Greer County emergency management director, says some homes incurred roof damage and the high school’s agriculture barn was destroyed, but the livestock survived.

„The pigs are walking around wondering what happened to their house,” she said.

National Weather Service meteorologist John Pike in Norman, Oklahoma, said a developing layer of relatively warm air aloft late Monday afternoon and evening over central Oklahoma was capping development of the kind of supercells that spawned tornadoes earlier in the afternoon in western and northern Oklahoma. Storm cells that did develop, however, followed one after the other in what is called „training,” leading to scattered reports of flash flooding Monday night.

The Storm Prediction Center website shows the main severe thunderstorm threat Tuesday will be over Missouri and northern Arkansas, with a slight threat in a surrounding area bounded by Dallas; Springfield, Illinois; Garden City, Kansas; and Oklahoma City.

The threat of nasty weather had prompted measures to prepare for the worst. School districts in Oklahoma City, nearby Norman and elsewhere in Oklahoma canceled classes with forecasts of hail and wind gusts of up to 80 mph (128 kph). A flood watch was in effect for the greater Oklahoma City region. Schools in Abilene and elsewhere in West Texas sent students home early.

Oklahoma Gov. Kevin Stitt said in a statement that the state emergency operations center was activated and urged motorists not to drive around barricades or into flooded roadways.

In Oklahoma City, emergency management officials opened the Multi-Agency Coordination Center, an underground bunker on the city’s northeast side that serves as a clearinghouse for coordinating information about severe weather events and other major emergencies.

Some flights at Will Rogers World Airport in Oklahoma City were canceled to avoid damage to aircraft and the possibility of extended delays elsewhere.

The Monday storms followed a spate of tornadoes in the Southern Plains on Friday and Saturday, leaving widespread damage and some people injured. 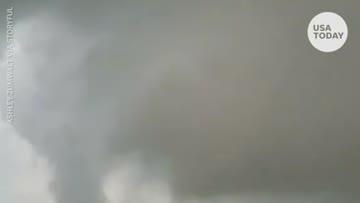 The deadly and destructive 2019 tornado season has been above-average, and shows no signs of letting up.

A day after at least 20 tornadoes rolled through the central U.S., more twisters, strong winds, downpours and hail threatened parts of Oklahoma, Texas, Kansas, Missouri and Illinois on Tuesday.

„It’s been very active,” said AccuWeather meteorologist Brett Rossio, noting that many of the tornadoes have been in so-called „Dixie Alley” in the southeastern U.S.

So far this year, based on preliminary data from the Storm Prediction Center, 697 tornadoes have been reported in the U.S. this year. (That number will be reduced once duplicate tornado reports have been removed.)

That preliminary total of 697 is above the to-date average of 659, the prediction center said. In a typical year, from January through December, roughly 1,200 tornadoes hit the U.S., according to the National Severe Storms Laboratory.

Tornadoes have killed 31 people so far this year, which is about half the long-term average of about 60 deaths.

The deadliest day for tornadoes so far was March 3, when 23 people died in a ferocious, EF-4 twister that tore through Macon and Lee Counties in Alabama with 170 mph winds.

One reason for the busy season, Rossio said, has been an active subtropical jet stream, which has helped stir up storms along the nation’s southern tier. Such a pattern is typical of a weak El Niño, a climate pattern marked by unusually warm sea water in the tropical Pacific Ocean, he said.

More: ‘Nowhere for the water to go’: Tornadoes, rescues, flooding swamp Central US day after 19 tornadoes

Looking ahead, more bad weather is forecast the rest of the month for the central U.S.:

„It looks like there is no end in sight to this very active pattern of severe weather into the end of May,” AccuWeather extreme meteorologist Reed Timmer said.

Rossio said the typical Tornado Alley states of Kansas, Oklahoma and Nebraska are most at risk over the next few weeks as storms fire up over the Great Plains. Along with the tornado threat, flooding will also be a big issue across the region.

This article originally appeared on USA TODAY: Tornado season has been wild, and more storms are coming