Trump calls ‘treason’ on Comey, McCabe and ‘a number of people’ 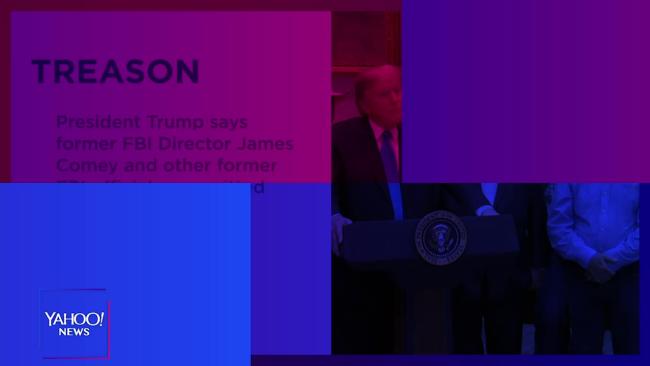 Scroll back up to restore default view. President Trump on Thursday escalated his attacks on those involved in launching the federal investigation into his campaign’s contacts with Russia, saying “a number of people” should be tried for treason.He also delivered what he thinks should be the verdict: Guilty.Among them: former FBI Director James Comey; ex-FBI Deputy Director Andrew McCabe; Peter Strzok, the deputy assistant director of counterintelligence; and Lisa Page, an FBI attorney who was romantically involved with Strzok at the time the probe began in 2016.Speaking to reporters at a White House event announcing aid for farmers and ranchers hurt by China’s trade policies in retaliation for American tariffs, Trump was asked which officials he specifically believes are guilty of treason.“I think a number of people,” Trump said. “They have unsuccessfully tried to take down the wrong person. If you look at Comey, if you look at McCabe, if you look at probably people higher than that, if you look at Strzok, if you look at his lover, Lisa Page, his wonderful lover.”Politically motivated investigations meant “to take down the wrong person,” if they occurred — all the people Trump mentioned deny it — are not grounds for a charge of treason, according to the U.S. Constitution, which says in Article III: “Treason against the United States, shall consist only in levying War against them, or in adhering to their Enemies, giving them Aid and Comfort.”The president and his allies have frequently pointed to texts exchanged between Strzok and Page — published last year by the Senate Homeland Security Committee — saying they showed bias against Trump.Trump at the White House on Thursday. (Photo: Carlos Barria/Reuters)  In one exchange, the pair discussed having “an insurance policy” should Trump win the 2016 election over Hillary Clinton.“Should she lose, we’ll have an insurance policy and get this guy out of office,” Trump said, misquoting the text. “That’s what they said and that’s what they meant. That’s treason. That’s treason.”Strzok and Page testified that the “insurance policy” reference had to do with seriousness with which they were approaching the investigation — and nothing to do with stopping Trump from becoming president or his removal from office.Trump said the ongoing congressional investigations into his conduct are similar, though he stopped short of calling them treasonous.“That’s what’s happening right now, without the ‘treason’ word I guess, but that’s what’s happening now,” he said. “They don’t feel they can win the election, so they’re trying to do the thousand stabs. Keep stabbing.”Trump added: “I would think, seriously, that Bob Mueller and his group of 18 killers have gone over my taxes. They’ve gone over my financial statements to a level that no one has gone over them before. And they were not discussed [in the Mueller report]. They weren’t even brought up.”It is not known to the public whether Mueller did in fact obtain Trump’s tax returns, which the president has refused to disclose. That is believed to be one of the questions congressional investigators want to ask Mueller, in testimony they have requested ever since his report was filed.Trump, who originally said he had no objection to Mueller’s appearance, is now trying to block his testimony.