A pickup truck evacuates from an area in north Jefferson City Missouri as floodwaters from the Missouri River rise over the road on Friday, May 24, 2019. The flooding come as residents are still cleaning up from a powerful tornado that hit the state’s capital city on May 22. (AP Photo/David A. Lieb)TULSA, Okla. (AP) — Officials on Saturday warned some Tulsa residents to prepare to head to higher ground because old levees holding back the swollen Arkansas River are stressed and more rain is expected for the flood-weary region.The river was four feet above flood stage on Friday and was already causing flooding in parts of Oklahoma’s second-largest city, including in south Tulsa where the murky brown water had inundated low-lying neighborhoods and crept right up to the River Spirit Hotel and Casino, which closed for the weekend.City officials said at a news conference Saturday that people living west of downtown should consider leaving for higher ground, even though the levees aren’t currently considered to be in danger of failing. If an evacuation becomes necessary, it would need to happen quickly, they said.Mayor G.T. Bynum said the levees were built in the 1940s and haven’t had to hold back this much water since 1986. Officials also said they don’t expect the river to recede in Tulsa until Wednesday at the earliest, pushing back their initial estimate by three days.”The level of risk you have in staying there is very high,” Bynum said. „That’s an unnecessary risk.”About 55 miles (89 kilometers) southeast of Tulsa, the small town of Braggs was completely surrounded by water and without power, according to Oklahoma Department of Emergency Management spokeswoman Keli Cain.Cain said it’s not clear how many of the town’s approximately 260 residents evacuated before the flooding, but water rescue teams deployed to assist there, as well as in other areas of Muskogee, Wagoner, Rogers and Nowata counties.Officials in Muskogee and Wagoner counties urged voluntary evacuations of low-lying areas along the Arkansas River, where water could be seen up to roofs, as well as along the rising Verdigris River.Cain said across the state, 87 people have been injured in the flooding, which has not yet peaked.Storms have buffeted the central Plains and Midwest all spring, inundating the ground and leaving rain with nowhere to go but into already bloated waterways. The region’s most recent spate of bad weather and flooding has been blamed for at least nine deaths.Downriver in northwestern Arkansas, between 100 and 200 residents had already evacuated their homes in the state’s second-largest city of Fort Smith, which is about 100 miles (160 kilometers) southeast of Tulsa. Karen Santos, a spokeswoman for the city of roughly 80,000 people, said at least one house along the river had been completely submerged.Laurie Driver, a spokeswoman for the Army Corps of Engineers, said the increased release of floodwater from upriver dams would affect Arkansas’ levee systems, which also haven’t been tested for as much water as is expected.”When you’re in territory you’ve never been in before, you’re not sure if the levees are going to be breached or not,” Driver said, though she added that most were in „good shape.”The National Weather Service updated its peak flooding prediction, and said it now expects the river to reach 41 feet (12 meters) near Fort Smith by late Tuesday night. That level would be 3 feet (0.91 meters) higher than its previous record, which was set in 1945. This would cause „near catastrophic flooding” in Fort Smith’s low-lying neighborhoods and business district, it said.Arkansas Gov. Asa Hutchinson declared a state of emergency Friday night to free up state agencies to do what they can to assist flooded areas.Additional storms are possible in Arkansas, Oklahoma and Kansas over the next week, according to the latest forecasts.Authorities have ordered the immediate evacuation of the 150 residents in the small town of Fall River, Kansas, the Wichita Eagle reported . Increased water releases from a dam just north of the town, about 75 miles (121 kilometers) east of Wichita, threaten to inundate the town. Already, buildings downstream from the dam’s reservoir could be seen submerged to their roofs.In Indiana, officials said Saturday that water levels had dropped slightly on a rain-swollen creek in the north of the state where a 4-year-old boy was swept away Thursday. The boy, Owen Jones, has not been found, though crews were on Deer Creek in Delphi searching for him.Meanwhile, weak-to-moderate tornadoes touched down Friday in Iowa and Kansas. The one in Iowa flipped some mobile homes and damaged rooftops, trees and outbuildings in and around Frytown, south of Iowa City, but didn’t injure anyone, Cedar Rapids TV station KCRG reported. The weather service said it was an EF-1 tornado, with winds of 110 mph.The tornado also disrupted Iowa City West High School’s graduation ceremony Friday evening, forcing students, their families and staff to seek shelter inside the Carver-Hawkeye Arena as tornado warnings sounded.

In Kansas, an EF-0 twister damaged trees near Douglass, in the southeast of the state, Television station KWCH reports. No one was injured.

DAVID A. LIEB and JIM SALTER 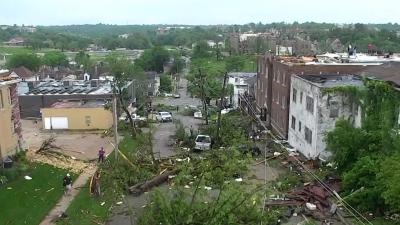 JEFFERSON CITY, Mo. (AP) — Eight years to the day after a devastating tornado killed 161 people and injured more than 1,100 others in Joplin, another big twister ripped through Missouri — this time the capital of Jefferson City — but with a far different result: no deaths or serious injuries.

The two storms hit Missouri cities roughly the same size on the same day of the year, May 22. And they both ravaged residential neighborhoods and business districts. But several factors created completely different scenarios — factors that worked against Joplin and helped spare the lives of Jefferson City residents like Debra Gary, who along with her husband, mother and four kids hunkered down in the basement before emerging to find their home badly damage.

„I always tell my kids, ‘Keep God first,’ because God was there for us,” Gary said Friday. „He kept us and our home safe when the tornado was going on.”

Then there was the timing. The Joplin tornado hit on a Sunday afternoon, as people were out and about, including hundreds who had just left the high school’s graduation ceremony.

„You had many more people potentially in the path, in vulnerable locations,” said Bill Bunting, chief of forecast operations of the National Oceanic and Atmospheric Administration’s Storm Prediction Center in Norman, Oklahoma.

The Jefferson City twister arrived in the middle of the night, which was actually a good thing, said Brian Houston, a communications professor and director of the University of Missouri’s Disaster and Community Crisis Center.

„We think of nighttime tornadoes being pretty dangerous because people might be asleep and not aware of them, but one of the good things is people tend to be at home, in structures,” Houston said. „It’s always better to be inside somewhere when a tornado strikes, rather than being out.”

The ability to find safe refuge from the storm also favored Jefferson City. Joplin sits in an area of southwestern Missouri where the soil is rocky, so basements are uncommon. In 2011, only about one in five Joplin homes had basements, which forced people to take shelter in far less secure places like bathtubs and closets. Basements are far more common in Jefferson City, which was built on rolling hills along the Missouri River.

Bunting and Houston agree that technology also was a factor that helped in Jefferson City. Smart phones are now omnipresent, and many people have alerts on their phones that warn of approaching weather danger.

Radar is more advanced, too. Forecasters were warning as far back as last week that the Plains and Midwest faced a highly dangerous storm scenario. On Wednesday night, central Missouri TV stations tracked the approaching storm and sirens in Jefferson City first sounded at 11:10 p.m., which was at least 30 minutes before the first property damage was inflicted. Gov. Mike Parson credited the warning system for saving lives.

As Jefferson City residents began the long task of cleaning up, they faced additional challenges: Flooding and heat.

The Missouri River topped a levee on the north side of town, threatening the airport and a few homes and businesses, including a golf course and events center Danny Baumgartner owns.

„It’s part of Mother Nature — these things happen, and you make the best of it and help each other out,” Baumgartner said. „With the tornado and this going on, it’s a lot of activities for a small community. But we’ll all make it.”

Flooding also forced the closure of some roads around the state Capitol, though the building itself sits on a bluff overlooking the river, out of harm’s way. The tornado also spared the Capitol building.

Ameren Missouri crews worked in sweltering humidity with a temperature nearing 90 degrees, replacing about 200 broken power poles and re-stringing lines in Jefferson City and Eldon, another central Missouri community hit by a tornado.

Ameren Missouri division director Chip Webb said it may be late Saturday before power is fully restored in Jefferson City.

Dozens of wildfires have combined with hot, dry weather to cause a sharp rise in air pollution across a swathe of central Mexico (AFP Photo/ALFREDO ESTRELLA)Mexico City (AFP) – A Mexican navy helicopter with five crew on board crashed Friday while helping to fight a forest fire.The navy said it was searching for any survivors from the crash, which occurred in the north-central state of Queretaro.The MI-17 helicopter, which took off from Valle Verde in the neighboring state of San Luis Potosi, was carrying a helibucket with 2,500 liters of water to fight the fire, the navy said in a statement, without giving further details of the accident.”We hope with all our hearts to find them alive,” President Andres Manuel Lopez Obrador said during a political rally in San Luis Potosi.

He said authorities have not been able to reach the accident site because „it is very difficult terrain.”Central Mexico has suffered hundreds of wildfires in recent months due to low rainfall and high temperatures.A lack of wind and rain have prevented the smoke from dissipating, which worsened the air quality of the capital Mexico City to such an extent that authorities last week declared an environmental alert and warned residents to avoid physical activity outdoors.

Three people have died on Mount Everest amid scenes of overcrowding at the summit of the world’s highest mountain.

The latest fatalities bring the number of people who have died on the mountain in the past week to seven.

The three victims were said to have died from exhaustion while descending from the summit.

In the last few days, a 65-year-old Austrian climber, an Irish professor and an Indian mountaineer have also lost their lives on Mount Everest.

The deaths come amid traffic jams near the summit as record numbers make the ascent, despite calls to limit the number of climbing permits.

It has been reported that Nepal has issued 381 permits of roughly £8,600 each for the spring climbing season at the world’s highest peak.

A photograph of hundreds of climbers queueing to reach the top of Everest ignited fears that the high number of attempts are putting lives at risk.

Yesterday on Everest. Nepal and Tibet/China need to limit the number of climbers on the mountain with a London Marathon style lottery for climbing permits. pic.twitter.com/RERjSgnvXh

2,709 people are talking about this

Mr Purja, who is making a world-record attempt to climb all 14 peaks of the Himalayas in seven months, estimated that there were around 320 climbers in the queue.

The number of people climbing Everest in 2019 could exceed last year’s record of 807 people.

This has led to calls for limits to be put in place.

Hunters will soon be able to legally kill elephants in Botswana

Animals are getting smaller because humans are destroying their habitats

Among those calling for a reduction in numbers was Ben Fogle, the television presenter who climbed the mountain last year.

He called it a „London Marathon style lottery for climbing permits” in a Twitter post, but was then criticised for helping to make the ascent popular after writing a book on his climb to the top of Mount Everest.