A high school teacher in Texas tweeted at President Trump to remove undocumented students from her school. (Photo: Getty Images)Georgia Clark, a Texas high school teacher, reported her undocumented students to President Donald Trump, telling him to, “Drain the swamp.”Viral Twitter screenshots from a person named Clark using the deleted handle @Rebecca1939 pleaded with the president to deal with the population of undocumented students at Carter-Riverside High School in Fort Worth.According to the Fort Worth Star-Telegram, which reportedly validated the tweets, an English and language arts teacher named Georgia Clark works at the school.Last week, one tweet said, “Mr. President, I asked for assistance in reporting illegal immigrants in the FWISD public school system and what I received was an alarming tweet from someone identifying himself as one of your assistants followed by a second tweet from the same person.”“Mr. President, Forth Worth Independent School District is loaded with illegal immigrants from Mexico,” states Clark’s May 17th tweet. “Carter-Riverside High School has been taken over by them. Drug dealers are on our campus and nothing was done to them when the drug dogs found the evidence.”

A teacher in Fort Worth Texas was linked to a Twitter account calling for President Trump to deal with undocumented students. (Screenshot: Twitter/Rebecca1939)Another one from Clark: “I do not know what to do. Anything you can do to remove the illegals from Fort Worth would be greatly appreciated.”Clark allegedly tweeted in March, “My prayers were answered. Drain that swamp and the sooner the better.”Clint Bond, a communications executive at the district, tells Yahoo Lifestyle, “We have placed the teacher on administrative leave (with pay) and the district continues to review its options in this matter.” Bond did not confirm whether Clark herself had written the tweets.The teacher included two phone numbers in her tweet to the president, none of which were working when Yahoo Lifestyle called for comment. A third listed number for Clark had been changed.A former teacher in the district, who did not want to be identified tells Yahoo Lifestyle, “I’m shocked. I worked at a high school in Fort Worth with a very high percentage of undocumented students. These kids worked very hard to create a better life here for themselves, many of mine obtaining scholarships at university for engineering, business, and medical degrees. I am disheartened to hear an educator would use their position as a political platform to promote hate and discrimination especially in a manor we as educators are trying to curb, social media. It can be such a divisive and harmful means of spreading hateful discrimination. It makes me extremely uncomfortable. I love my students, not because of who they are or where they were born, but because of who they have become.”A spokesperson for the Fort Worth Independent School District shared a voicemail and an email message from superintendent Kent P. Scribner, with Yahoo Lifestyle. “In the past 24 hours, there has been much talk in the news and on the Internet about the use of social media by our staff,” said Scribner. “Our mission is to prepare ALL students for success in college, career and community leadership. Let me reiterate our commitment that every child in the District is welcome and is to be treated with dignity and respect. As we conclude the school year this Friday, please know we take this promise very seriously and your child’s safety and well-being are always our number-one priority. Thank you.” 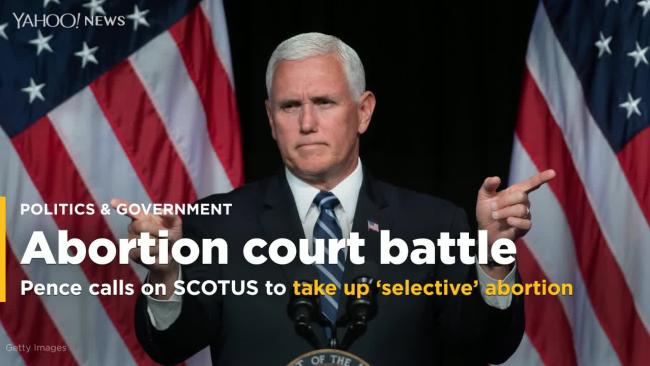 Scroll back up to restore default view.Washington (AFP) – US Vice President Mike Pence on Tuesday urged the Supreme Court to take up a case about abortions based on sex, race or potential disability of the fetus, after the high court sidestepped the issue.While serving as governor of Indiana, Pence had signed into law a ban on so-called „selective” abortions. A lower court struck it down, and earlier Tuesday, the US Supreme Court opted not to weigh in until lower courts do so.Pence’s office released a statement saying it remained „hopeful that at a later date the Supreme Court will review one of numerous state laws across the US that bar abortion based on sex, race, or disability.””Countries across the globe prohibit selective abortion — and the United States should do the same,” said the statement from Pence’s press secretary Alyssa Farah.Pence’s remarks follow moves by legislatures in several Republican-led states to restrict access to abortion in a bid to eventually challenge the 1973 US Supreme Court ruling in Roe vs Wade, which made abortion legal nationwide.Since taking office, President Donald Trump has appointed two conservative justices — Neil Gorsuch and Brett Kavanaugh — and liberal members of the court are now outnumbered five to four.

Dylan StablefordSenior Editor,Yahoo News•May 28, 2019 Before leaving Japan, Trump attacks Biden over 1994 ‘Three Strikes’ crime bill President Trump wrapped up his trip to Japan by continuing to attack former Vice President Joe Biden for supporting the infamous 1994 “Three Strikes” crime bill that mandated life sentences for criminals convicted of a violent felony after two or more prior convictions, including drug crimes.And the president stepped up his attacks on Biden’s intelligence, endorsing North Korean dictator Kim Jong Un’s description of Biden as “a low IQ individual.”Tuesday afternoon, back in Washington and facing growing criticism for siding with Kim over an American vice president, while on foreign soil, Trump attempted to soften his comments, tweeting:I was actually sticking up for Sleepy Joe Biden while on foreign soil. Kim Jong Un called him a “low IQ idiot,” and many other things, whereas I related the quote of Chairman Kim as a much softer “low IQ individual.” Who could possibly be upset with that— Donald J. Trump (@realDonaldTrump) May 28, 2019

The 1994 law has come under criticism for its disproportionate impact on African-Americans and is a prime target of the criminal justice reform movement.
“Super Predator was the term associated with the 1994 Crime Bill that Sleepy Joe Biden was so heavily involved in passing,” Trump tweeted. “That was a dark period in American History, but has Sleepy Joe apologized? No!”
The president added: “Anyone associated with the 1994 Crime Bill will not have a chance of being elected. In particular, African Americans will not be able to vote for you. I, on the other hand, was responsible for Criminal Justice Reform, which had tremendous support, & helped fix the bad 1994 Bill!”
Last December, Trump signed into law a bipartisan criminal justice reform bill, called the First Step Act, that reduced mandatory minimum prison sentences. The president drew bipartisan praise for his support of the legislation.
But Trump wasn’t always a champion of reforming prison laws to help African-Americans.
In 1989, after black and Latino teenagers known as the Central Park Five were accused of the brutal rape and assault of a female jogger in New York City, Trump took out full-page ads in four New York City newspapers calling for the return of the death penalty.Their convictions were vacated in 2002 after DNA evidence and the confession of a convicted rapist and murderer exonerated them.

President Trump and former Vice President Joe Biden. (Photo illustration: Yahoo News; photos: Eugene Hoshiko/AP, Matt Rourke/AP  As late as 2016, Trump said he remained convinced of their guilt.And as president, Trump has called for the death penalty for nonviolent criminals, such as drug dealers.Last year, while unveiling a plan to combat the opioid epidemic, Trump ordered the Justice Department to pursue the death penalty for drug traffickers.“[They] kill so many thousands of our citizens every year,” Trump said. “That’s why my Department of Justice will be seeking so many tougher penalties than we’ve ever had, and we’ll be focusing on the penalties that I talked about previously for big pushers, the ones that are killing so many people, and that penalty is going to be the death penalty.“Other countries don’t play games,” he added. “But the ultimate penalty has to be the death penalty.”
During his weekend trip to Japan, Trump stirred controversy by downplaying North Korea’s missile tests, saying they don’t bother him “personally,” although “my people think it could have been a violation” of the agreement Trump struck with Kim at their earlier summit.Kim’s assessment of Biden was mild compared to his description of Trump in 2017 as a “mentally deranged dotard.”
Trump’s simultaneous praise for the North Korean leader and attack on the former vice president did not sit well with the Biden team. On Tuesday, deputy campaign manager Kate Bedingfield issued a statement, writing, “The President’s comments are beneath the dignity of the office. To be on foreign soil, on Memorial Day, and to side repeatedly with a murderous dictator against a fellow American and former Vice President speaks for itself. And it’s part of a pattern of embracing autocrats at the expense of our institutions — whether taking Putin’s word at face value in Helsinki or exchanging ‘love letters’ with Kim Jong Un.”