Donald Trump is flying home to Washington on Friday after a five-day state visit to Britain, Ireland and France to commemorate the 75th anniversary of D-Daybut can expect to find himself immediately confronted with a number of major issues left stewing in his absence.

After the enjoying the pageantry of his royal reception in London, the president will arrive home this afternoon to face escalating trade tensions with Mexico and China and further calls for his impeachment, with House speaker Nancy Pelosireportedly telling her fellow Democrats on Tuesday: “I don’t want to see him impeached, I want to see him in prison.”

Mr Trump hit back at Ms Pelosi, calling her “a disaster” during an interview with Laura Ingraham of Fox News staged in front of the Normandy American Cemetery in plain view of 9,000 war graves, an insensitivity for which both the president and the network have been heavily criticised.

The president also caused mass confusion on Twitter when he urged NASA not to plan any further trips to the moon, instead directing all of their efforts to Mars.

“For all of the money we are spending, NASA should NOT be talking about going to the Moon – We did that 50 years ago,” he wrote on Twitter.

He added, “They should be focused on the much bigger things we are doing, including Mars (of which the Moon is a part), Defense and Science!”

Mr Trump also declared Friday that now “there is a good chance” the US will strike a deal with Mexico to avert the tariffs he had scheduled for Monday to force the nation’s ally to stem the flow of Central American migrants into the United States.

The tweet marked a change in tone from earlier Friday, when his spokeswoman Sarah Sanders had told reporters in Ireland before Mr Trump took off: “Our position has not changed. The tariffs are going forward as of Monday.”

US and Mexican officials were holding a third day of talks at the US State Department Friday trying to hash out a deal that would satisfy Mr Trump’s demand that Mexico dramatically increase its efforts to crack down on migrants. 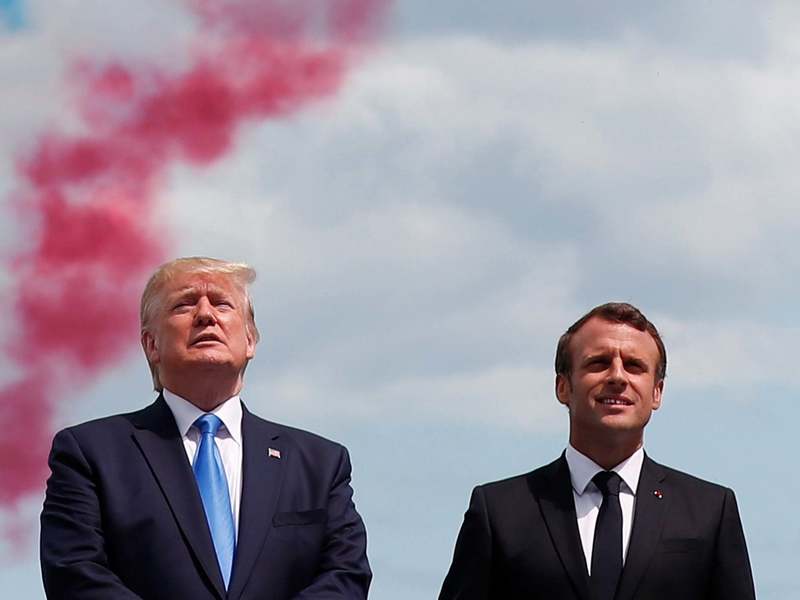 Macron tells Trump to embrace ‘universal values’ on D-Day anniversary As the aforementioned CNN explains: „While he was in France on Thursday, his team back in Washington was frantically trying to find an off-ramp for the latest tariff confrontation with Mexico, though time to seal a deal is running short.”Trump told reporters in Ireland: „Something pretty dramatic could happen… We’ve told Mexico the tariffs go on. And we mean it, too.”
In his absence, talks on the showdown with Mexico intensified in Washington, stretching long into the night, as officials from the White House, the State Department and the Department of Homeland Security met to discuss next steps.
„What Mexico is offering is not enough,” says Mercedes Schlapp, White House director of strategic communications.19 hours ago Trump also stuck it to China, an even more significant foe with whom he is at war over trade terms.”Our talks with China, a lot of interesting things are happening. We’ll see what happens… I could go up another at least $300bn (£236bn) and I’ll do that at the right time,” he told reporters before  boarding Air Force One on his way to France for the D-Day commemorations on Thursday.”But I think China wants to make a deal and I think Mexico wants to make a deal badly.”When you have the money, when you have the product, when you have the thing that everybody wants, you’re in a position to do very well with tariffs, and that’s where we are,” he continued.”We’re the piggy bank. The United States is the piggy bank. It has all the money that others want to take from us, but they’re not taking it so easy anymore. It’s a lot different.”Despite numerous rounds of talks between the superpowers this spring, no agreement has been reached to end their feud and the US ultimately raise tariffs on $200bn (£157bn) of Chinese goods to 25 percent. Last month, China said it would increase tariffs on $60bn (£46bn) of US exports in retaliation, a move that caused stock markets to tumble.As discussed, Trump was in Normandy yesterday to honour the heroism of the American, British, Canadian and Free French soldiers who crossed the English Channel to storm the beaches of northern France during the Second World War, gaining the Allies a crucial foothold on the continent in the fightback against Nazi Germany, an operation beginning on 6 June 1944.
The president evidently enjoyed the military ceremony and the chance to paint himself as a great statesman, the custodian of the memory of the Greatest Generation despite fighting so hard himself to avoid the draft in the 1960s („You think I’m stupid? I wasn’t going to Vietnam”, he allegedly told ex-lawyer Michael Cohen) and relentlessly mocking the late hero of that conflict, Senator John McCain, since taking occupation of the Oval Office. 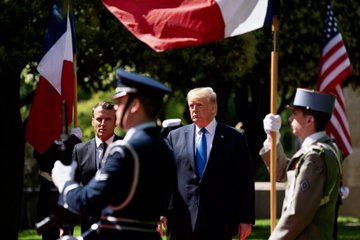 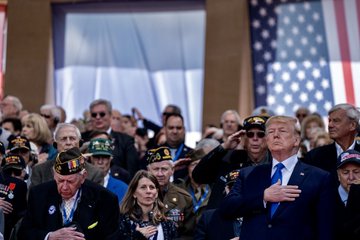 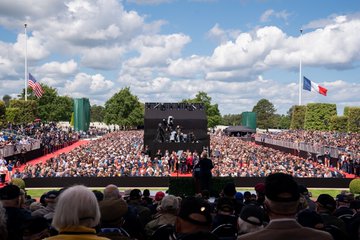 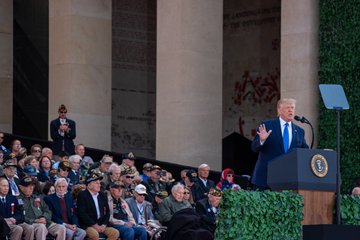 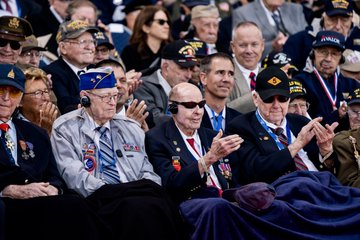 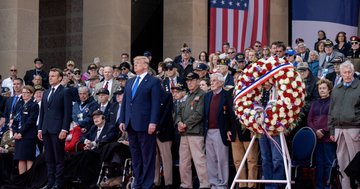 In this image provided by the U.S. Navy, a Russian destroyer, left, sails very close to the USS Chancellorsville, right, while operating in the Philippine Sea, Friday, June 7, 2019. The U.S. and Russian militaries accused each other of unsafe actions in the incident. (Photo by Petty Officer 1st Class Christopher J Krucke via AP)

WASHINGTON (AP) — The U.S. and Russia accused each other of unsafe actions on Friday after an American guided-missile cruiser and a Russian destroyer came within 165 feet (50 meters) of each other in the Philippine Sea.

Acting Defense Secretary Patrick Shanahan told reporters that the U.S. will file a formal diplomatic complaint about the incident and will have military to military conversations with the Russians. He added that the encounter will not deter the U.S. from conducting naval operations.

The U.S. 7th Fleet said the Russian destroyer put the safety of the USS Chancellorsville and its crew at risk, forcing it to reverse all engines at full throttle to avoid a collision.

No one was injured, and the ships never came into contact, said Navy Cdr. Clay Doss, a spokesman for the Japan-based 7th Fleet.

An American helicopter was preparing to land on the Chancellorsville, which was traveling on a steady course, when the Russian destroyer, traveling behind the U.S. ship, started moving faster and approached as close as 50-100 feet (15-30 meters), the 7th Fleet said in a statement.”We consider Russia’s actions during this interaction as unsafe and unprofessional and not in accordance with the International Regulations for Preventing Collisions at Sea (COLREGS), ‘Rules of the Road,’ and internationally recognized maritime customs,” the statement said.It was the first such incident involving warships in the region since September, when the Chinese warship Luoyang maneuvered close to the USS Decatur , a Navy destroyer, in the South China Sea, an incident the U.S. also labeled unprofessional and unsafe. The U.S. at the time said the Chinese ship came within 45 yards (41 meters) of the American ship, forcing it to maneuver out of the way. The Chinese said the Luoyang had been deployed to drive the U.S. vessel away from islands that China claims as its own.The U.S. also has repeatedly complained in recent years that Russian planes have flown dangerously close to American aircraft, and the two nations routinely shadow each other in international airspace.In this latest incident, in open ocean northeast of the Philippines, the Russian military accused the Chancellorsville of making a dangerous maneuver by crossing the path of the Russian destroyer Admiral Vinogradov. The U.S. said the incident happened in the Philippine Sea, while the Russians said it was in the East China Sea, which is further west and closer to China.The Russian military said in a statement that the U.S. cruiser „suddenly changed direction and crossed the path of Admiral Vinogradov just 50 meters (165 feet) away,” forcing the crew of the Russian ship to make a quick maneuver to avoid a collision. It said its navy sent a radio message in protest.With U.S.-Russian relations at post-Cold War lows over the Ukrainian crisis, the war in Syria and Moscow’s meddling in the 2016 U.S. presidential election, the Russian and U.S. militaries have frequently exchanged accusations of what they describe as unsafe maneuvers by the other side’s warplanes and navy ships._Yamaguchi reported from Tokyo. Associated Press writer Vladimir Isachenkov in Moscow contributed to this report.

MARAWI CITY, Philippines — It had only been a week since Mohammad Ali Acampong finished renovating his house when bombs and bullets struck Marawi City.

Two years ago, pro-Islamic State militants took over in a bid to carve out their own “Wilayah,” or province, forcing nearly 100,000 people to flee in what became the Philippine military’s toughest and longest conflict since World War II.

Acampong, a local government official, and his family of eight, left his three-story lakeside house.

“We had a comfortable life before. Now we live in between shelters, enduring heat, the lack of water, the lack of everything.”

Marawi was once one of the most picturesque cities in the Philippines.

About half of it is now charred concrete and skeletons of buildings, the effects of 154 days of airstrikes and artillery fire by the military, and booby traps the rebels laid everywhere to keep people at bay.

The Acampongs now live in a tiny temporary housing unit on the city’s outskirts, competing with thousands of families for water and other basic utilities.

At least 500 other families live in plastic tents, like Asnia Sandiman, 25, who produces made-to-order clothing with a government-issued sewing machine.

“The tent is fine until it rains and it gets so cold, or until the heat is so bad,” Sandiman said.

“My deepest hope is that we are allowed to go back to Marawi but honestly, I would take any permanent address just to get out of here.”

Hundreds of militants, 165 soldiers and at least 45 civilians were killed in the five-month conflict. President Rodrigo Duterte in October 2017 declared the city liberated and its rehabilitation officially underway.

Bangon Marawi (Rise Marawi), an interagency task force in charge of reconstruction, has a deadline of 2021 for rebuilding and remains confident of meeting that.

“We could only go as fast as legally possible. We can’t make shortcuts,” its field office manager, Felix Castro, said.

“It takes a while in the beginning but it will be quick once it starts.”

Except for stray dogs and soldiers on guard, Marawi’s commercial center has been abandoned. There is no sign of the promised rehabilitation.

Thousands of people are in limbo following a conflict that no one saw coming.

Most are jobless and dependent on relief goods, like Noronisah Laba Gundarangin, a mother of three, who lives with four other families in her sister’s home.

The 73,000 pesos ($1,385) her family received from government agencies isn’t enough for a small business. They have debts to pay and children to feed.

Gundarangin, 40, wonders what happened to all the help and money pledged by the international community when the war was in the spotlight. The authorities say not all of that has materialized.

“I know billions (of pesos) were donated to Marawi, but they go through so much bureaucracy that by the time it reaches us, they are pennies,” she said.

The task force commander, Eduardo del Rosario, on Monday said obstacles to progress were debris, unexploded ordnance and unsafe structures, but said those should all be cleared by November, with some construction to start in September.

While awaiting that, the task force has been allowing people to return to see the place they once called home. Now they call it “ground zero.”

Acampong gave his consent for his house to be demolished. He returned recently and found a papaya tree growing in its place.

“It’s painful because we had nothing to do with this war. We were just caught up,” he said.

“Everything we’ve worked hard for, all the big and small investments, are now all gone.”

“Every day, it’s like this. Waiting and waiting, as if waiting for death.” (Reuters)